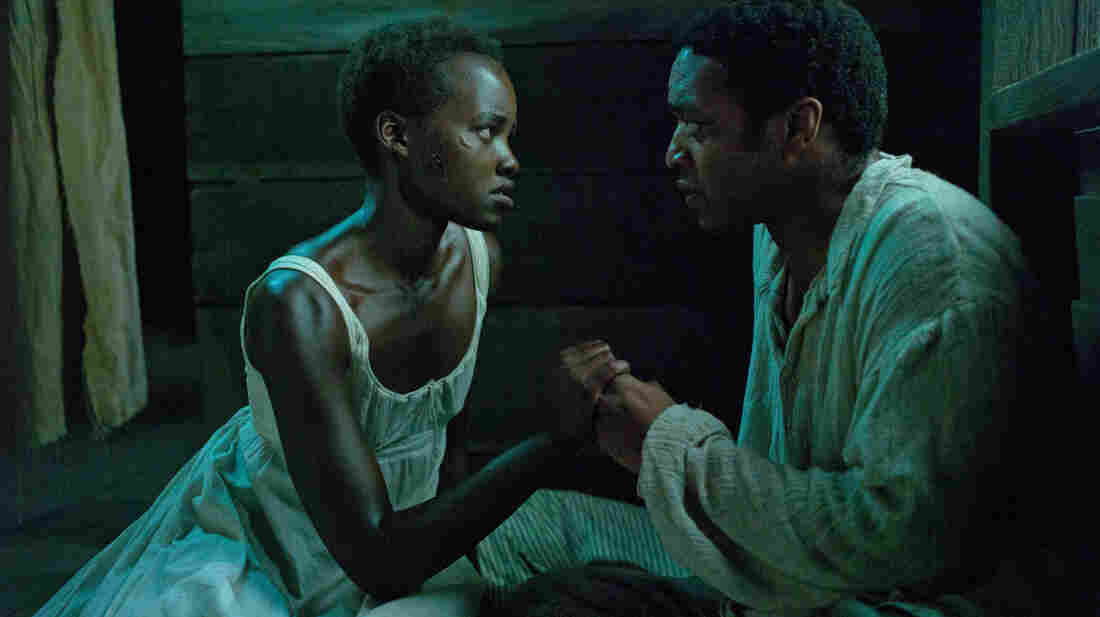 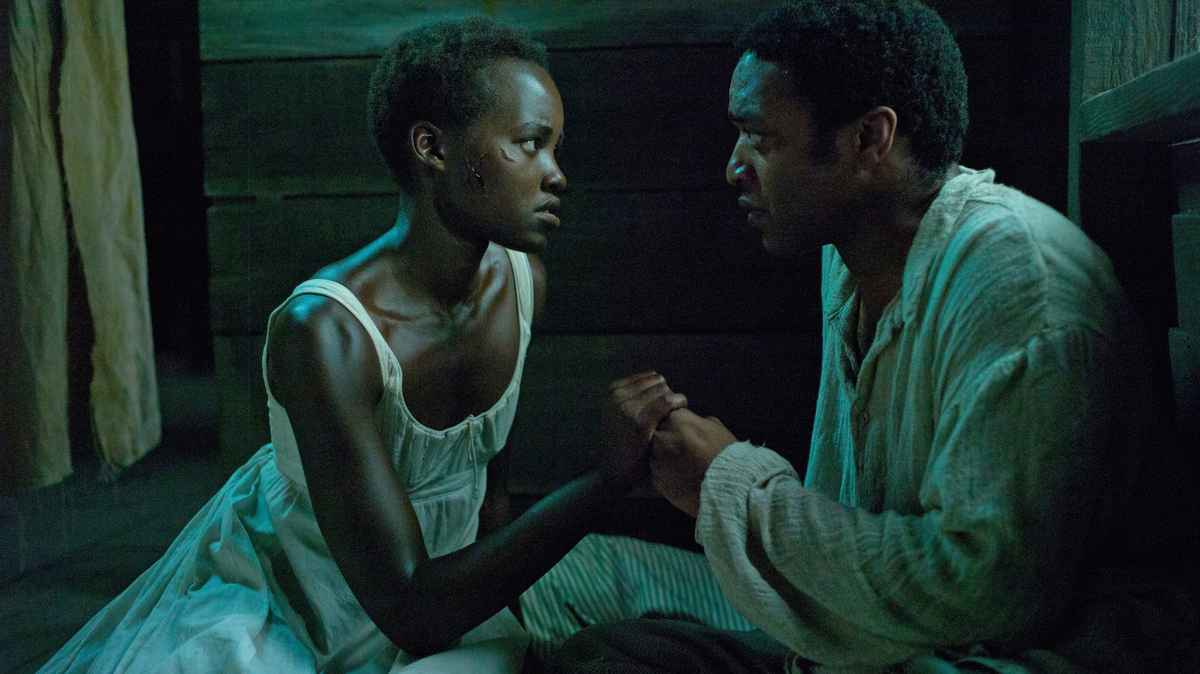 Lupita Nyong'o and Chiwetel Ejiofor play Patsey and Solomon, two slaves on a Louisiana plantation, in 12 Years a Slave.

Solomon Northup was born free in early-19th-century upstate New York. He lived the life of a respected and elegant musician until 1841, when he was lured South by the promise of a lucrative stint playing his fiddle in a traveling circus.

In Washington, D.C. — in the shadow of the Capitol — Northup was drugged. When he came to, he was in chains: a slave headed for the hellish world of plantation life. Only the hope of being reunited with his beloved wife and children kept him going.

In the new film Twelve Years a Slave, British director Steve McQueen tells the largely forgotten, true story of Northup's capture, struggle and eventual freedom. McQueen is also known for provocative films like Hunger, about a hunger strike at a prison in Northern Ireland.

McQueen and British actor Chiwetel Ejiofor, who plays Northup in the film, tell NPR's Renee Montagne about the perils of plantation life and the inspiration they drew from Northup's own words.

Ejiofor: He starts out in the story and in the book, really, with the idea that he is in a struggle for his freedom, which seems clear, which seems obvious, you know. But at a certain point that changes, and he realizes that he's in a struggle for his sanity. And I think that that difference, that point of change, when it comes, is quite startling. It is that kind of Alice in Wonderland feeling. 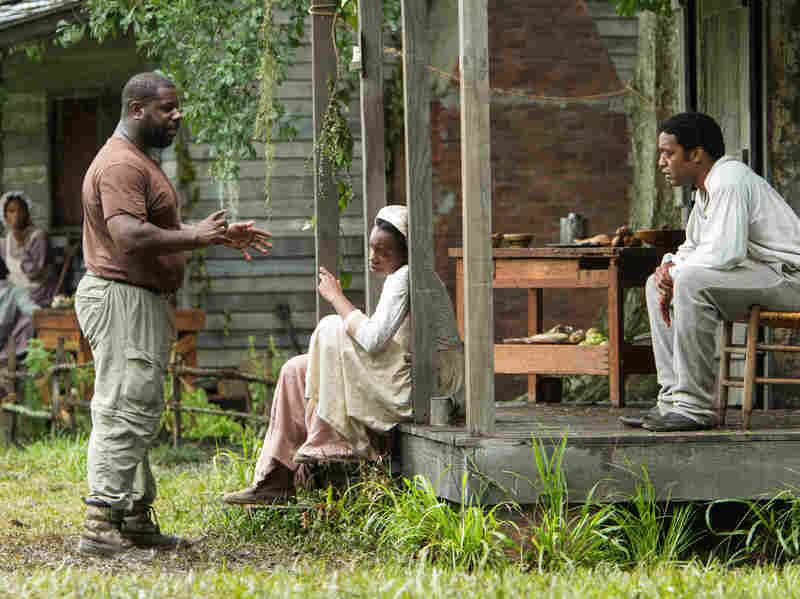 Director Steve McQueen (left) works with actors on the set of 12 Years A Slave. The film was shot on a Louisiana plantation that sits next door to where Solomon Northup spent his years as a slave. Jaap Buitendijk/Fox Searchlight Pictures hide caption 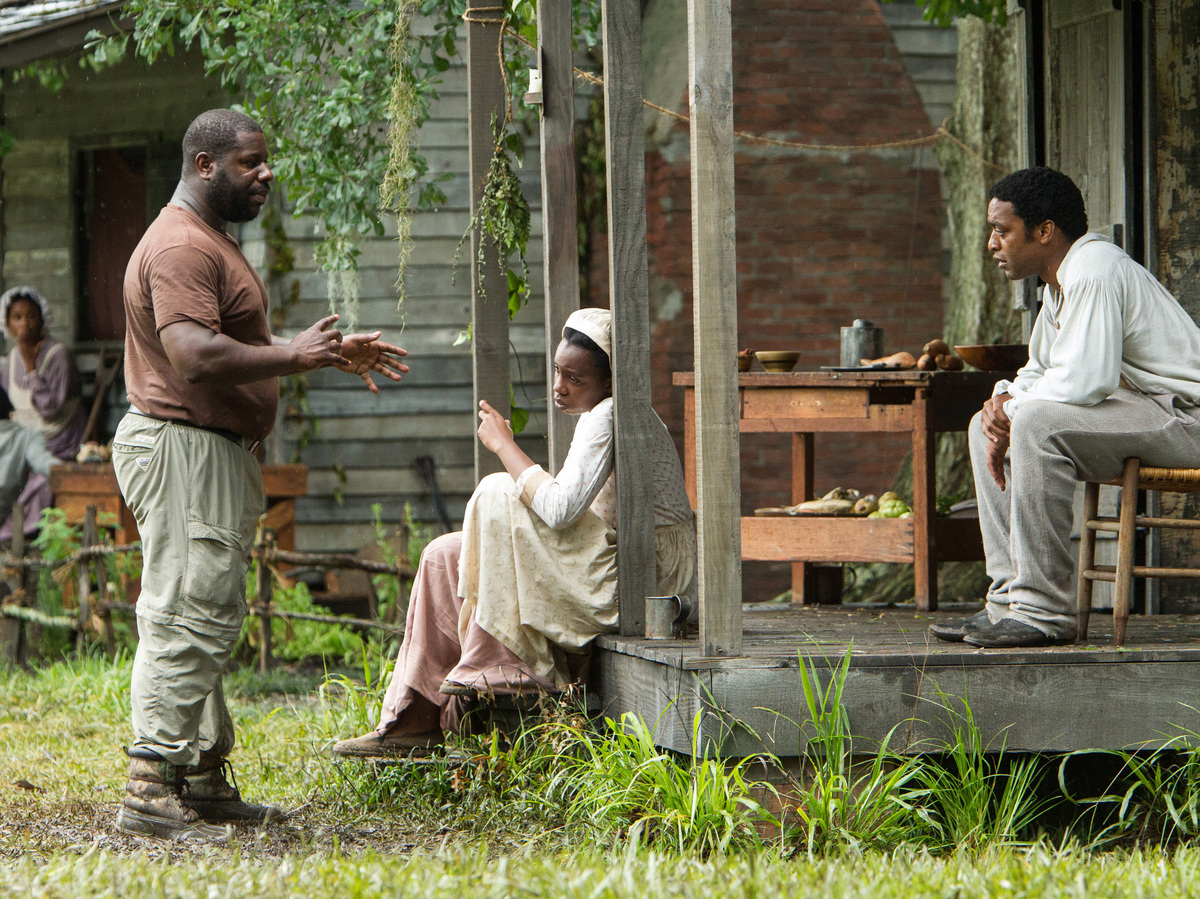 Director Steve McQueen (left) works with actors on the set of 12 Years A Slave. The film was shot on a Louisiana plantation that sits next door to where Solomon Northup spent his years as a slave.

McQueen: For me, I always thought to think of it as a fairy tale, because when he is seduced to go to Washington to actually work in the circus, it's like Pinocchio. So I had to handle it in that way. Always in the fairy tale, it starts off beautifully and wonderfully, and then, of course, it goes dark. And then, obviously, you go through this darkness hopefully to come out into the light. So I was very much interested in that kind of Brothers Grimm sort of fairy tale.

On slaves being at the mercy of plantation owners' whims

Ejiofor: That's the extraordinary tension, I think, of the plantation where Solomon ends up, is that it's not the actual acts that are the problem. But it is the moments of tension in the threat of the acts is what really holds people in that kind of bondage.

On the sometimes inexplicable behavior of Epps, the plantation owner

Ejiofor: His behavior is peculiar because he is, you know — they're all slightly mad. They've sort of been driven mad by these circumstances, by this oppression, effectively. And Epps' mind is something that is completely fragile and fraught. And he has a complete dependency on the slaves. And it's a very complicated place for him, a very lonely place.

McQueen: I do feel sympathy for Epps because, you know, he's in a system where he has to uphold — and he does uphold it with an iron fist. But at the same time, he's in love with his slave called Patsey and he can't understand why he is in love with his slave. And he goes about destroying his love for her, which is basically destroying her physically. And that kind of perversity is sort of inherent in slavery, not just through this weird love story. And it manifests itself within horrible acts of violence. But at the same time, you know, he's a human being.

On a particularly stunning scene, in which Northup is punished by near-hanging, with just his toes touching the ground

McQueen: It was a norm. Death and torture was the norm. And you see how people sort of get used to it, get numb to it. So, for example, you see in that shot when he's hanging there, slaves going about their business and not interfering with him hanging there. Yes, I wanted it in the film to be sort of the lynching of all lynchings in film, because somehow this had to portray all of what happened in the past, which never got brought into the light.

On what enabled Northup to survive 12 years of slavery

Ejiofor: That is what I was always searching for in the book. It is so extraordinary, what he did. The first clue that I got was ... the scene where Solomon is hanging in the sun. There's a description in the book when he's describing that day, and after several hours, you know, it's boiling hot and he's hanging there, and he says in his kind of typically understated fashion that he would have given more years of servitude if they had only moved him a few feet into the shade. And there was something about that line that I thought, well, there is his resolve. There is the depth of his spirit. This man is somehow, gently, unbreakable.

McQueen: This film, for me, is about love. And it's a word that should be tossed around not, obviously, frequently, but when you mean it. It has to do with his humanity. He kept hold of his humanity, his dignity, through all kinds of unfortunate situations. And it's difficult just to get through a day sometimes, but he managed to get through 12 years of the most horrific ordeal you could imagine and held onto a kind of truth, which I think is just extraordinarily beautiful and a lesson for us all.