Accessibility links
'Carrie' Had The Power, But Mom Had The Scary Going On Stephen King's novel Carrie gets a big-screen update, complete with prom pranks, buckets of blood and a mother you might not want to take anybody home to meet. NPR's Elizabeth Blair takes a look at a character she remembers being terrified by when Piper Laurie played her in the 1976 film. 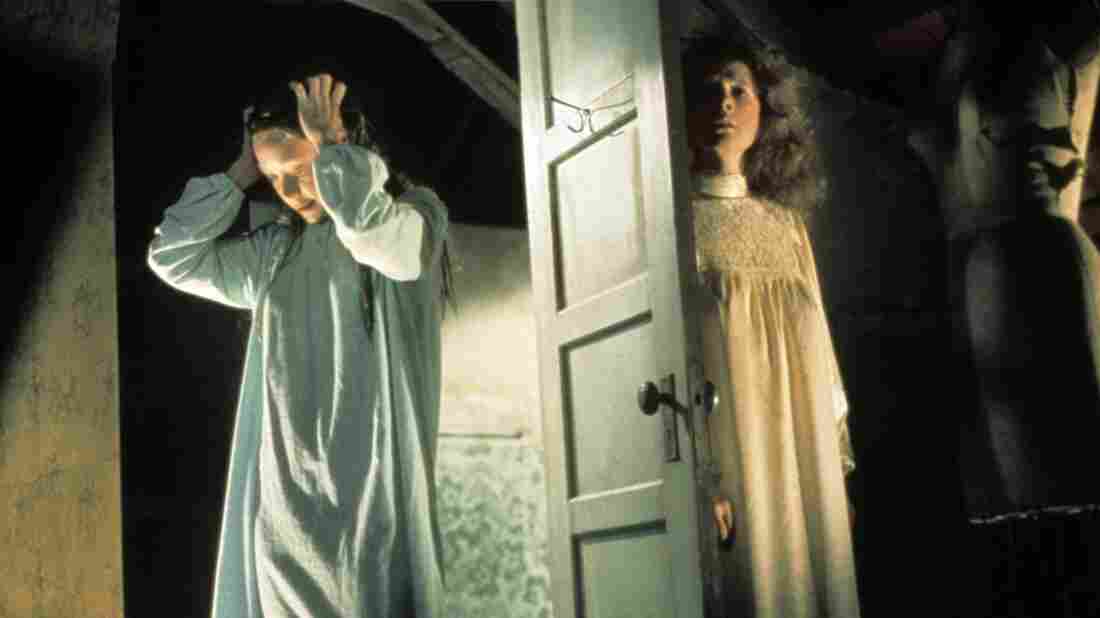 In Stephen King's novel and the film adaptations, Carrie (played by Sissy Spacek, left, in the 1976 version) is the one with the supernatural powers, but for NPR's Elizabeth Blair, Carrie's mother Margaret (Piper Laurie) was the truly scary character. United Artists/The Kobal Collection hide caption 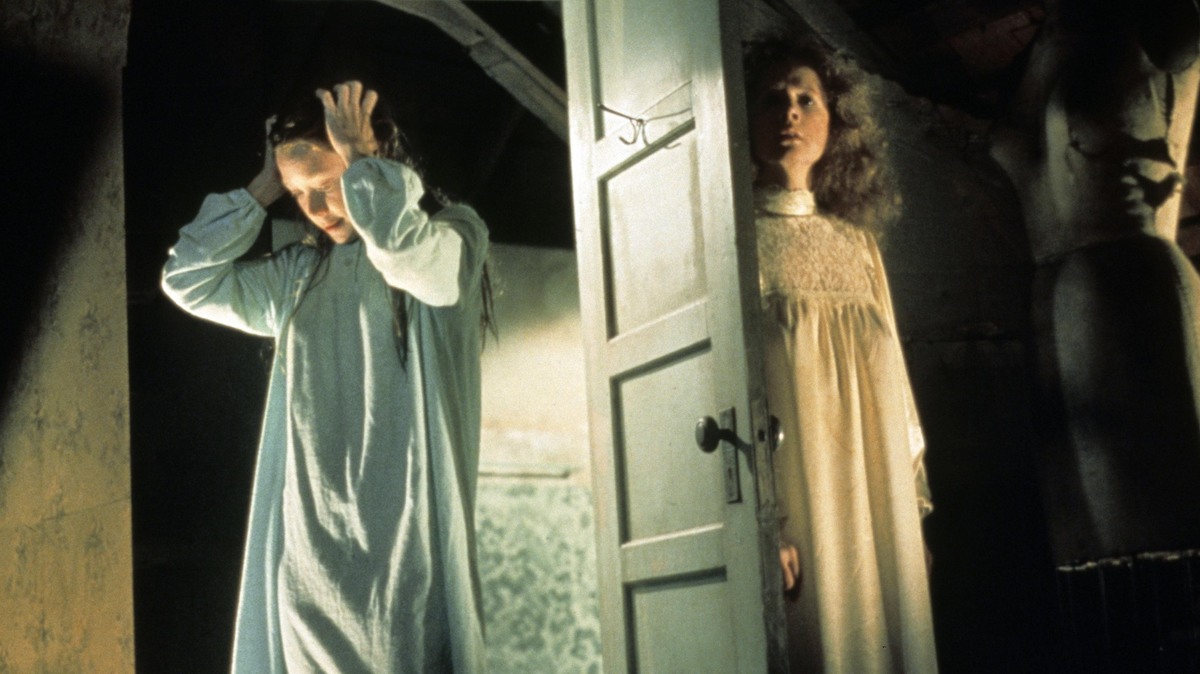 In Stephen King's novel and the film adaptations, Carrie (played by Sissy Spacek, left, in the 1976 version) is the one with the supernatural powers, but for NPR's Elizabeth Blair, Carrie's mother Margaret (Piper Laurie) was the truly scary character.

Just in time for Halloween comes a new movie version of Stephen King's horror novel Carrie. While the teenaged Carrie White is clearly at the center of the story, I think her mother is the more fascinating character.

Carrie — about a shy misfit whose coming of age collides with her mother's fearful religious fundamentalism and her schoolmates' pack-animal cruelty, with combustible results — scared the bejesus out of me when I was a teenager. Carrie turned out to be dangerous, sure. But it was her mother, Margaret White, who made my heart stop.

"Eve was weak. Say it!" she screeches over and over, until Carrie — who's come home shattered after being surprised by her first period in the school shower — finally does say it. She drags the terrified girl into a closet that's been turned into a nightmarish chapel, complete with candles, Bibles and a bloody crucifix.

To understand Margaret White, you need only dissect the scene in which Carrie is getting ready to go to her high school prom against her mother's wishes. She's dressed in a low-cut gown, and her mother's reaction is one of utter disgust.

"I can see your dirty pillows. Everyone will."

For Margaret White, breasts are 'dirty pillows' on the bodily path to what she says is the "first sin": sex.

"Such a great line," says Kimberly Peirce, who directed this month's Carrie update. Peirce says Margaret White is terrified of everything. 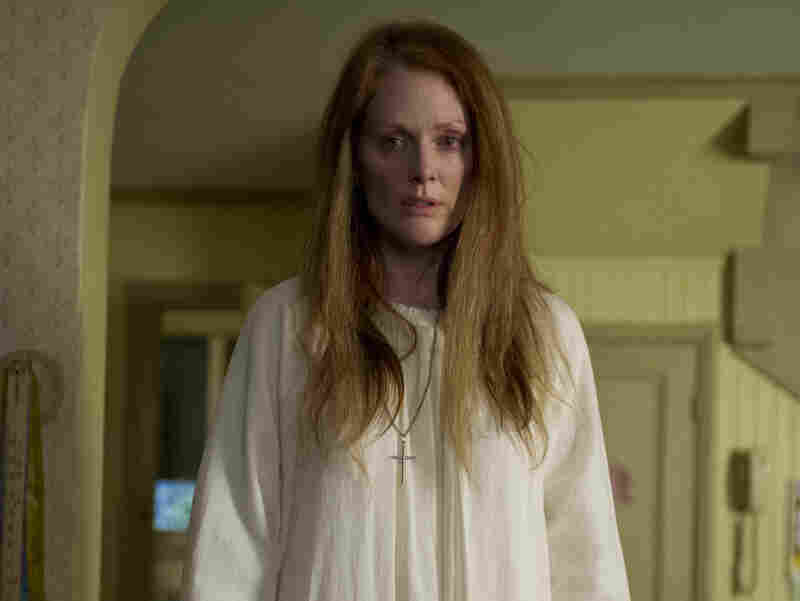 Julianne Moore takes on the problematic-parent in the remake — complete with long wild hair and a white nightgown reminiscent of Piper Laurie's in the original film. Michael Gibson/MGM/Screen Gems hide caption

"Terrified of sex and terrified of sin, and yet she took great pleasure in having sex at some point," Peirce says. So Carrie — as the byproduct of that sin — is condemned to eternal punishment. "You pray, little girl. Pray for forgiveness."

Margaret White may have been the reason I never got confirmed.

A 'Lyrical Black Comedy,' At Least To The Lady In It

In the 1976 movie, actor Piper Laurie played Margaret White. When she first read the script for Carrie, she thought it was a send-up.

"I laughed so much during the whole making of this movie — I can't tell you — at how preposterous I was," says Laurie. With her black cape and ghostly white face framed by that flaming red hair, Piper Laurie's Margaret is operatic.

"Our movie," she says, referring to the 1976 film directed by Brian De Palma, "always seemed like a lyrical black comedy."

Stephen King has said that Carrie and Margaret White were inspired by people he encountered as a teenager in Durham, Maine. King wrote that he did some handyman work for a woman who lived alone with her daughter, who had epilepsy. A large crucifix hung on the wall in their living room. Another inspiration for Margaret White was an "intensely religious" woman King said he met at a laundromat. King writes that he always "wondered what her children were like."

In the novel, Stephen King describes Margaret White as wearing her hair "pulled back in a bun." But Julianne Moore — who plays her in the new movie — wears her hair long and loose, as Piper Laurie did in the original. Peirce says Moore believes the fictional Margaret White would never commit the sin of vanity.

'Everything She Says Is Right'

Even though Margaret is a wild, over-the-top invention, Kimberly Peirce still thinks there's a grain of truth in her.

"I think all parents and all children — they're not going to fight to the death with knives, but I do think that there is the child being unrecognizable to the parent at times," Peirce says. "[You understand] the parent desperately wanting to protect the child and love the child, and that struggle for the child to individuate and grow up. And I think that's what Carrie and Margaret struggle with."

The fictional Margaret White is undeniably cruel to her daughter. And yet Peirce says she's always struck by the fact that Margaret is ... more or less on target.