Accessibility links
Serpent Experts Try To Demystify Pentecostal Snake Handling Earlier this month, NPR reported on a small group of Pentecostal Christians who handle snakes to prove their faith in God. We wondered why the handlers are bitten so rarely, and why so few of those snakebites are lethal. Herpetologists who have studied the snake-handling phenomenon have some theories. 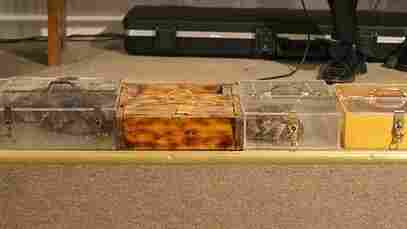 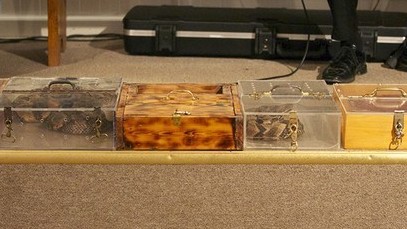 Boxes housing snakes sit on the floor of the Full Gospel Tabernacle in Jesus Name in Middlesboro, Ky.

Two weeks ago, NPR reported on a group of Pentecostals in Appalachia who handle snakes in church to prove their faith in God. The story got us thinking: Why are the handlers bitten so rarely, and why are so few of those snakebites lethal?

After the story aired, NPR was contacted by snake experts who strongly suggest that a snake's reluctance to bite a religious serpent handler may have more to do with the creature's poor health than with supernatural intervention.

The herpetologists at the Kentucky Reptile Zoo have been following the activities of Pentecostal snake handlers for years. They have watched hours of video of snake-handling services and examined snakes used in church.

"The animals that I've seen that have come from religious snake handlers were in bad condition," says Kristen Wiley, curator of the Kentucky Reptile Zoo, a facility in the town of Slade that produces venom and promotes the conservation of snakes. "They did not have water. The cages had been left not cleaned for a pretty long period of time. And the other thing we noticed is there were eight or 10 copperheads in a container that was not very large."

Snake-Handling Preachers Open Up About 'Takin' Up Serpents'

What's more, she says there was no fecal material in the container, which indicated the snakes were not being fed. Riley says a snake that may be dehydrated, underweight and sick from close confinement is less likely to strike than a healthy snake. Moreover, the venom it produces is weaker.

She says snake-handling preachers who don't take care of their snakes are "setting themselves up for a safer encounter during their services when they use a snake that is in bad condition to begin with."

One of the pastors they level criticism at is Jamie Coots, who regularly takes up serpents in his Full Gospel Tabernacle in Jesus Name in Middlesboro, Ky. Coots was featured in NPR's story as well as a National Geographic reality series called Snake Salvation.

When we visited the snake room behind Coots' house, there were about 30 snakes — mostly timber rattlers and copperheads — crowded into glass cages. He says he waters them regularly but that his supplier of live mice and rats moved away. And many of the snakes won't eat anyway.

In a follow-up call, I asked him how long his snakes usually live. 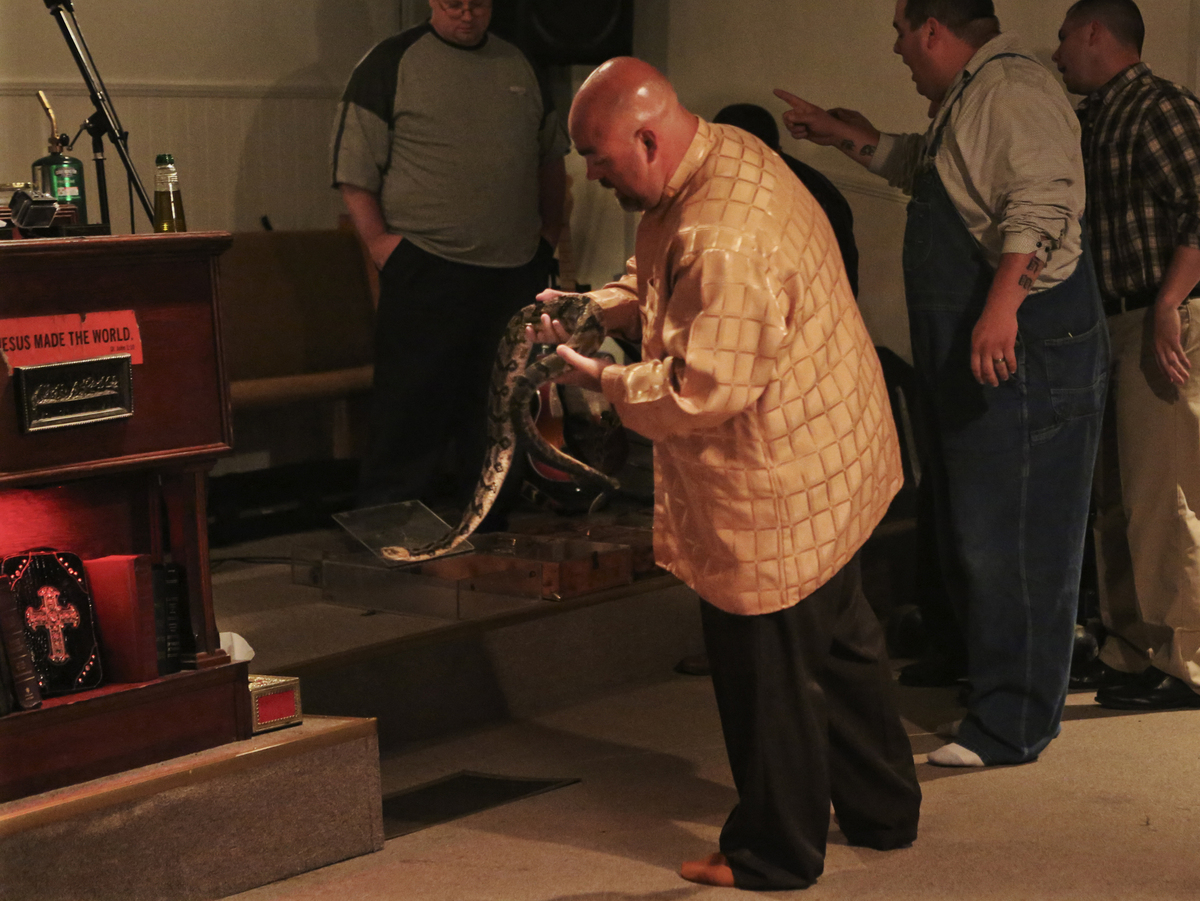 The Kentucky Reptile Zoo reports that well-cared-for snakes live 10 to 20 years or longer in captivity.

"People who don't believe in it are gonna say anything to try and discredit us, you know, to say that it's not God actually doin' it," he says.

Coots was arrested in 2008 by the Kentucky Department of Fish and Wildlife for trafficking in illegal venomous snakes. He was convicted and fined. Today he possesses permits to keep and transport snakes legally.

He says any suggestion that the serpents they take up in church are not deadly is ridiculous. Handlers get bitten all the time, he says, and every few years someone dies. He invites his critics at the Reptile Zoo to come to his church to see if the anointing power of God is a sham.

"If they want to bring some of theirs down here, we'd readily handle them. Or if they want to come down here and free-handle ours and see if they don't get bit, they're welcome to do that, too. We get fresh snakes all the time," Coots says.

An entirely different view of religious snake handling comes from Whitfield Gibbons, an authority on snakes of the Southeastern U.S. at the University of Georgia.

"I think most snakes, a rattlesnake or a copperhead, if you are gentle with them after they've been in captivity and [you] pick them up gently, they won't bite you. So, it wouldn't matter what [your] religious belief was," Gibbons says.

He does not recommend that anyone try this.