Accessibility links
LA's Own 'Amazing And Unique Instrument' Turns 10 This coming week, Disney Hall celebrates its 10th anniversary. NPR's Arun Rath speaks with conductor and music director Gustavo Dudamel, as well as other figures from the Los Angeles classical scene, about the highlights since then. 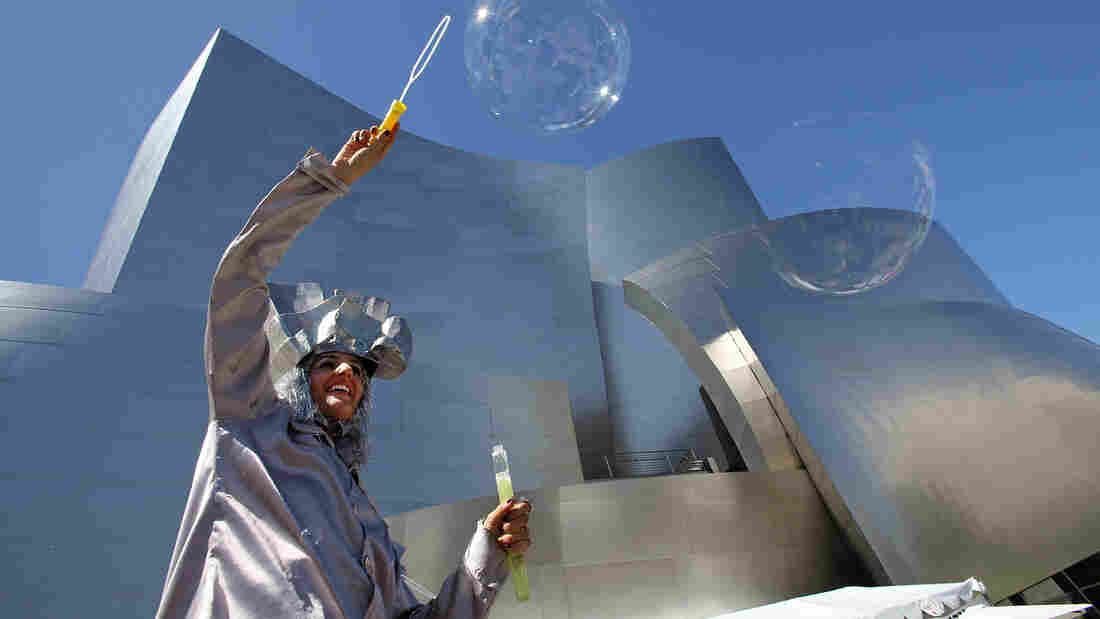 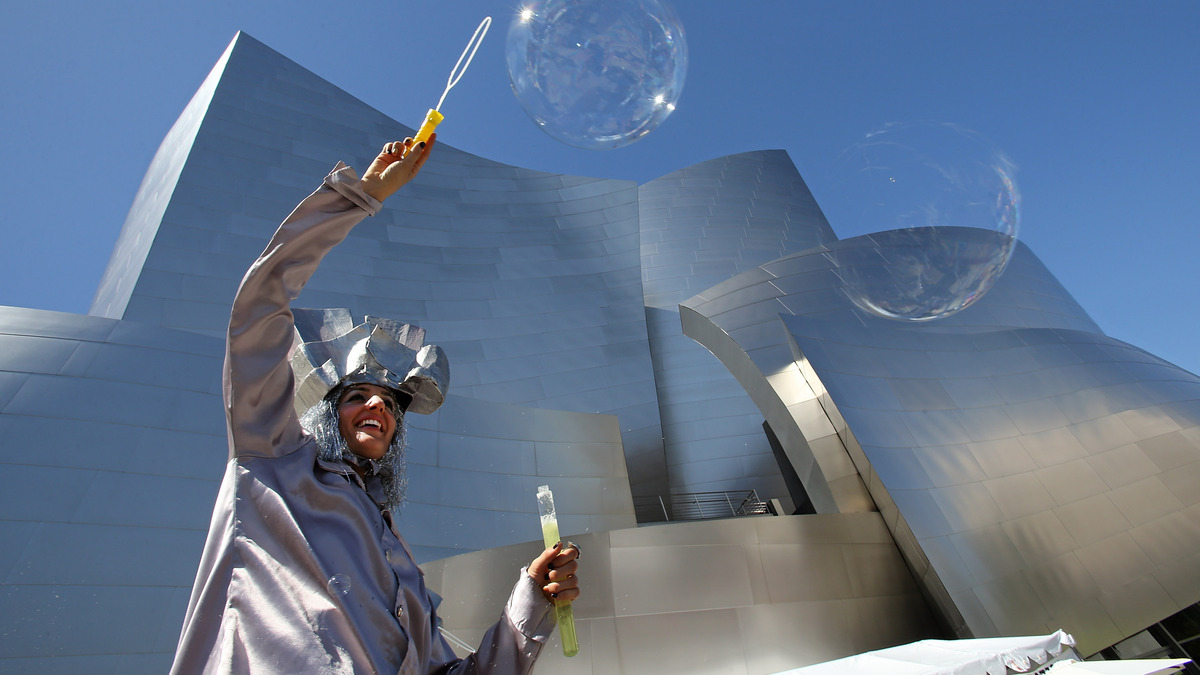 An Angeleno revels at 10 Times The Party, a celebration of Walt Disney Concert Hall's 10th Anniversary, on Oct. 5 in Los Angeles.

If you were listening to NPR 10 years ago this week, you might have heard this enthusiastic proclamation: "The wait is finally over for architect Frank Gehry, for the musicians and staff of the LA Philharmonic, and for all of Los Angeles. Tonight, for the first time in public, the orchestra plays its magnificent new instrument: Walt Disney Concert Hall."

The voice was that of KUSC's Gail Eichenthal, speaking alongside Performance Today's Fred Child from the broadcast booth at the freshly-minted Disney Hall back in 2003. From day one, the city's residents marveled at the building's curving, swaying, almost dancing facade.

"It's become a symbol of LA already," says Mark Swed, who covers the city's classical music scene for the Los Angeles Times. "It became one almost overnight."

Architect Frank Gehry worked wonders with the structure. But Swed says music aficionados give special credit to the man who designed the acoustics: Yasuhisa Toyota.

"People come there, and they just don't realize what things can sound like," Swed says. "The first night, they ended with Stravinsky's Rite of Spring. The fact is, you just could sense not only what every individual instrument was doing — and it felt like it was very close to you — but the combination of them. You got all of the colors and all of the amazing nuances. But then you just got the big, physical impact where it felt like the bass was coming through the floor right into your soles of your feet."

"And interestingly enough, audiences learned extremely quickly about that," Mark Swed notes. "And it's made for much, much better audiences because you notice it."

Here's how disciplined they are now: For the 10th anniversary gala, music director Gustavo Dudamel began with John Cage's "4:33," a completely silent piece. All the musicians sit basically motionless for four minutes and 33 seconds.

"It's all about being in the environment you're in," Swed says, "but everybody was so quiet, there was almost nothing to hear! Everyone was so respectful. We're all so used to just being quiet in there."

As for the outside, Swed says that although Frank Gehry's undulating design quickly became a landmark, not many people know what Disney Hall could have been if not for early budget cuts.

"They took away the cafe from him. They don't light it well; you wouldn't think of not lighting the Arc de Triomphe," Swed says. "He chose the steel specifically for its reflective qualities because his idea was you would project the concert on the skin of the hall as it was going on. ... There would be a giant Solanen or Dudamel conducting away. And they've never done that."

Still, Disney Hall was an instant success, and has remained so. And that stands in stark contrast to some of the depressing recent headlines about classical performance across the country: lockouts at the Minnesota Orchestra, or the bankruptcy of the New York City Opera.

"With a new hall, and especially with Disney Hall, you have a year or two where you're gonna sell out every concert, because people just want to see it. And then you've got to find a way to hook people," Mark Swed says. "One of the ways the LA Phil hooked people was with new music."

Enter Gustavo Dudamel. Says the orchestra's wild-haired Venezuelan music director: "I always say that LA is a place of the new tradition, of new things." 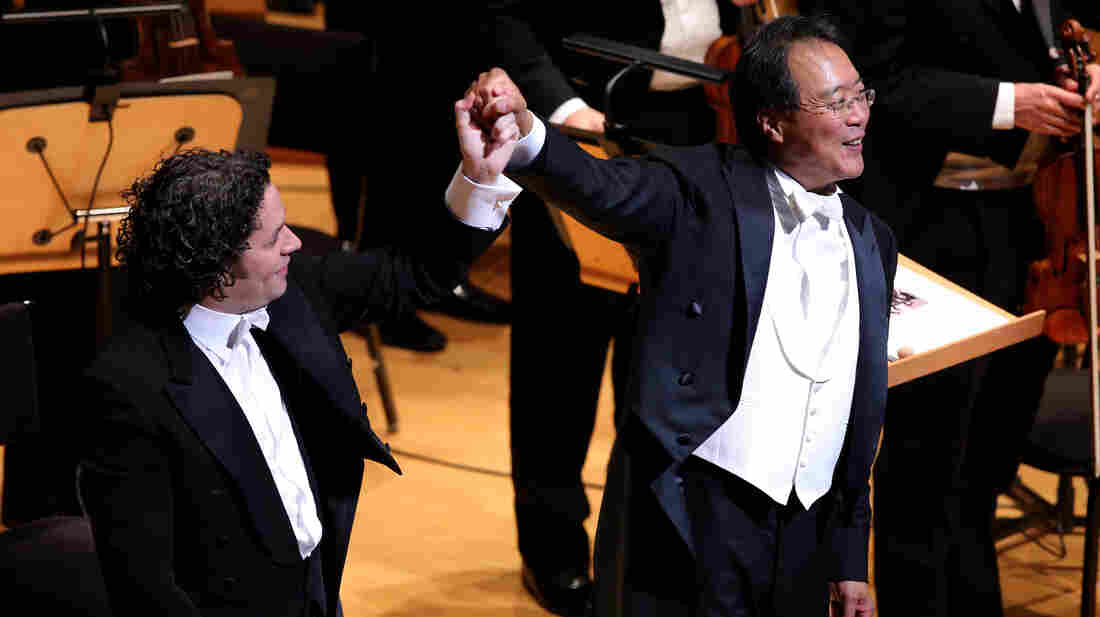 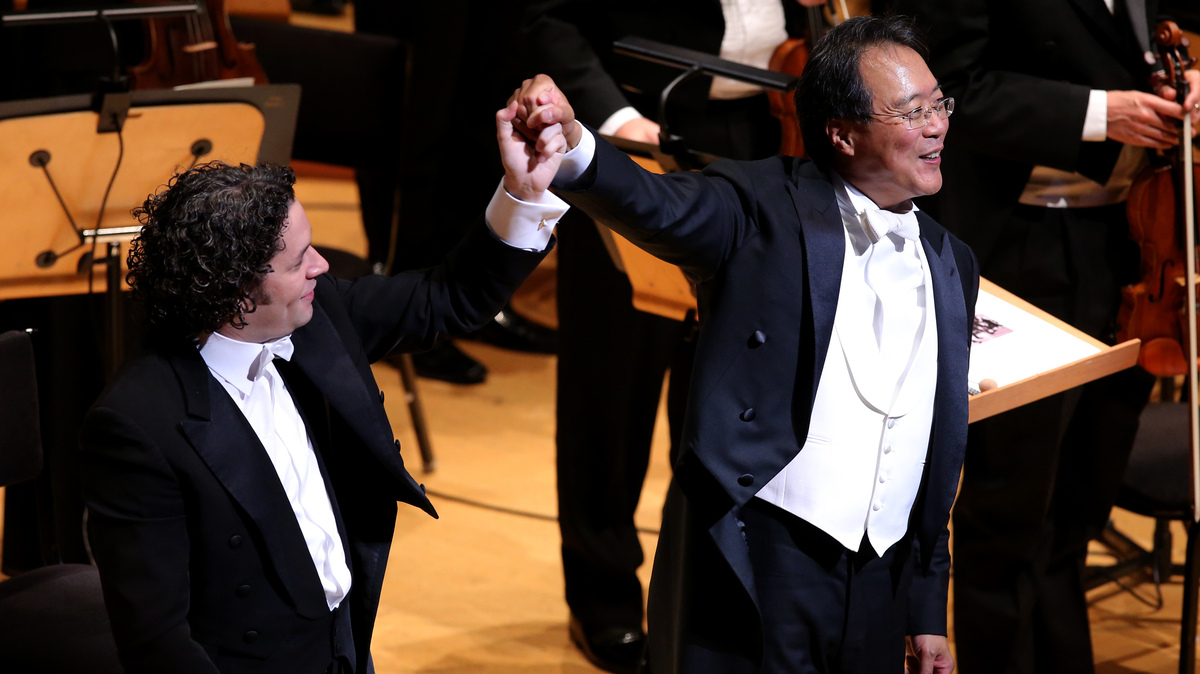 Craig Mathew/Courtesy of the artist

Dudamel took over in 2009 and brought a youthful energy and unmistakable star power. But he's also been bucking the nationwide trend of offering only the tried-and-true favorites, like Mozart and Bach. Dudamel says he thrives on introducing audiences to new composers.

"It's really interesting because in the new music programs, we have good audiences," Dudamel says, "[whereas], in other places, they feel like they will not connect with that music."

It's a legacy that goes back to Dudamel's predecessor, Esa-Pekka Salonen, whose dedication to new music paid off in more than just ticket sales. In 2005, the L.A. Phil gave the first performance of one of the most important works of the last decade: the Neruda Songs.

"Peter Lieberson wrote these songs for his wife Lorraine Hunt Lieberson, who was an amazing mezzo-soprano, just at the height of her powers," Mark Swed explains. "She also had cancer and was dying. Nobody quite knew how bad things were at that point. But these are songs that were very personal, and it's really become one of the best known and most popular new classical pieces from this century."

These days, Disney Hall routinely packs in crowds with new music on the schedule, whether tucked in between Debussy and Bartok or standing alone as part of its now-revered Green Umbrella series.

"It's sort of like hitting the jackpot," says composer Andrew Norman, who had a piece commissioned for the series in 2011. "I mean, this series is known all over the country and the world as being a showcase for the most interesting things in new music, so for me as a young composer, this was part electrifying and part terrifying."

Disney Hall is unquestionably unique, both outside and in, and that enduring gift is not lost on Gustavo Dudamel.

"For me, and for the orchestra, it's something great to have an instrument where we can develop a sound," he says. "And this is the Disney Hall: an amazing and unique instrument. It's moving all the time; it's calling you all the time to move. You know, architecture is harmony, it's sound, it's music. And I really love this place."

Disney Hall is spending this month celebrating its 10th anniversary.