Accessibility links
Pitching Like It's 1860, Teams Play Ball With Vintage Flair In this curious base ball league, the umpire wears a top hat and the players drink water out of pewter mugs. The rules and equipment follow 19th-century protocol. A history-lover's dream, the games take place on a farm, evoking the sport's pastoral early years. 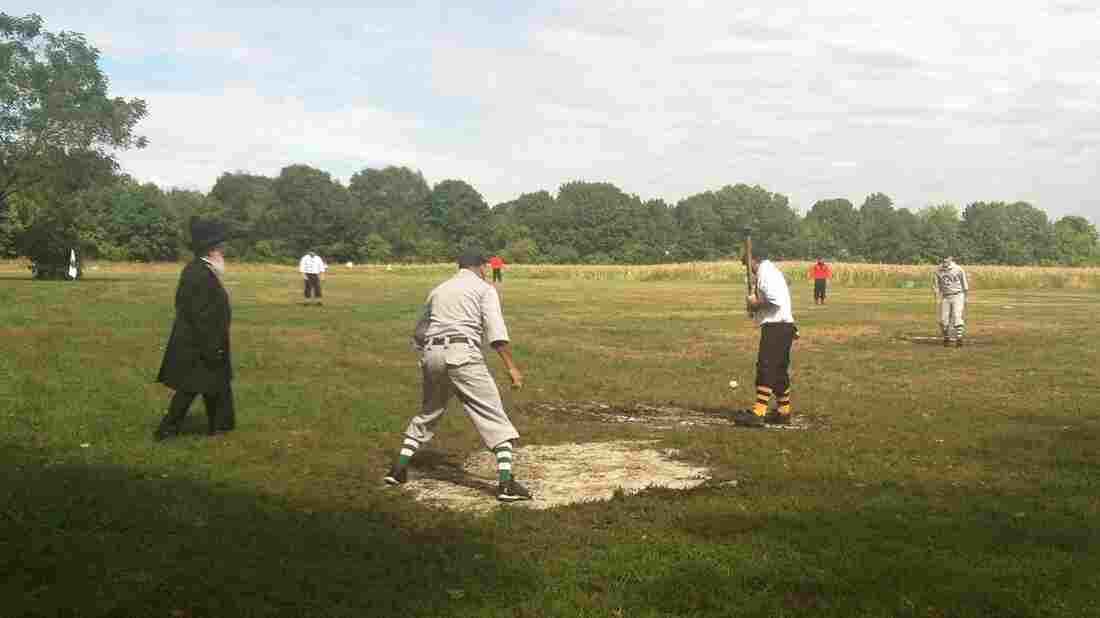 The Essex Base Ball Organization, a vintage baseball league, holds its games on a farm in Newburyport, Mass. Edgar B. Herwick III for NPR hide caption 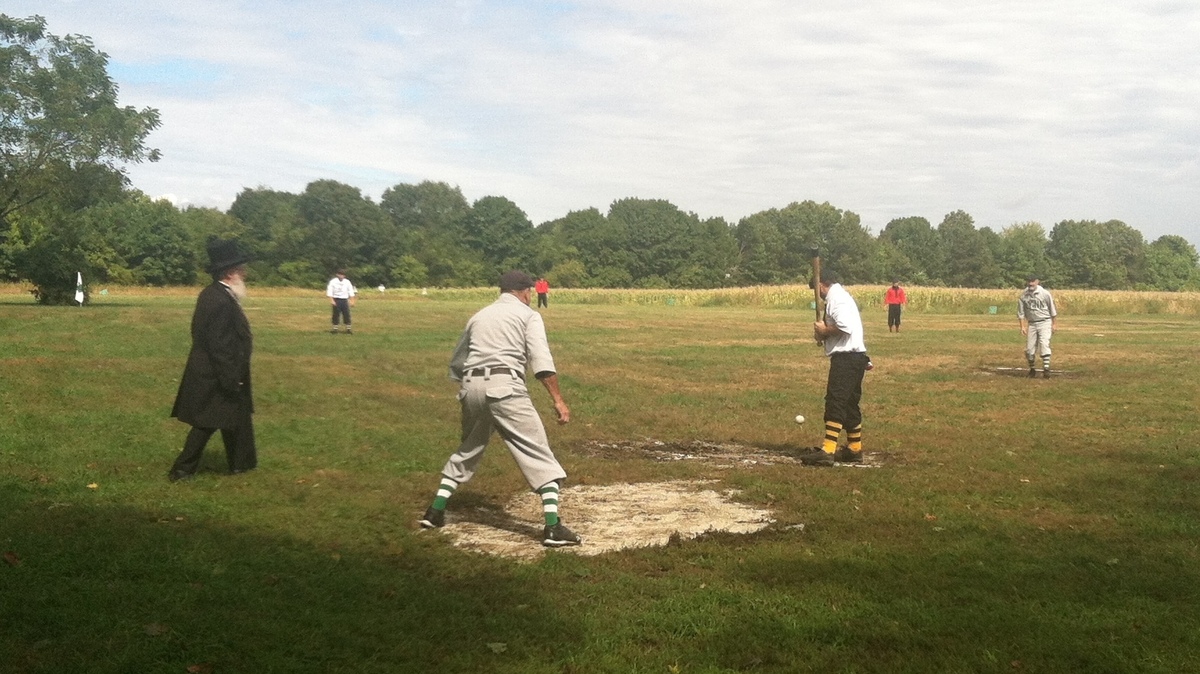 The Essex Base Ball Organization, a vintage baseball league, holds its games on a farm in Newburyport, Mass.

Edgar B. Herwick III for NPR

The Red Sox square off against the Detroit Tigers at Fenway Park on Saturday in Game Six of the American League Championship Series. Forty miles north, another league is putting the finishing touches on its season.

This particular brand of baseball comes with a curious twist.

On the Spencer-Peirce-Little Farm in Newburyport, Mass., mud-speckled pigs forage for food in their pen, and feather-tousled chickens peck at each other in their coop.

There's also a ball game. The Lynn Live Oaks battle the Lowell Base Ball Nine in the final regular season game of the Essex Base Ball Organization.

Note "base ball" — the way they spelled it back in the 1860s. That's the way they play it here, too: This is a four-team league for enthusiasts of vintage baseball.

While the game is played to the 1865 rule book, this is no reenactment, says Brian Sheehy, who founded the league 12 years ago.

The way you play is different, too. Gloves didn't enter the game until the 1870s, so that means players are fielding with their bare hands. Mercifully, the "lemon peel" baseball is softer, but Sheehy says you "can still definitely break some fingers."

The pitcher tosses underhand; there's no mound, no rubber. And home plate is an actual iron plate.

The biggest difference? Catching the ball on one bounce is the same as catching it on the fly. When that happens, the batter is "out on the bound."

Keeping the competition on the straight and narrow in a smart, mid-century suit and a top hat is Jeff "Gray Beard" Peart. He's the league's umpire, promoter and emcee — all rolled into one.

"We all love baseball, and we all appreciate the history of the times, so we want to get it right and show people good, quality baseball," he says.

And boy do they get it right — from the loose-fitting vintage uniforms to the silver cups and pewter mugs that take the place of modern water bottles. To top it off, they use plenty of old-time terminology.

"Today's batter would be called a striker back then, and the pitcher was called a hurler," Peart says.

But nothing does more to evoke the spirit of the game's pastoral early years than their field of dreams, tucked into a corner of this still-working, 230-acre farm. It's a history-lover's dream, complete with a cornfield fence and a 17th-century farmhouse that is open for tours while the game goes on.

The atmosphere is tailor-made for families, with grandparents cheering from lawn chairs and an eager teenager manning the weathered old scoreboard.

"It's a time we get together on weekends, what it used to be like on a Sunday ... when stores were not open and all the families would get together," Kevin Murphy says. "It's just very comforting and it's a great time."

While friendly atmosphere has its appeal, the real draw — for the players and the fans — is the game itself.

"We're pretty gentlemanly, and that was kind of the theme back then," league founder Sheehy says. "But everybody still wants to win, and when there's close play and it's a tight game, people kind of get fired up."

That is until the last out — today a big win for Lowell — when the players line up along the foul lines for a rousing "thank you" to the opposing team.

A bit of old time gentility that still looks pretty stylish, even in the modern age.