Accessibility links
When Playing Video Games Means Sitting On Life's Sidelines The reSTART clinic in Washington State treats Internet addicts. Many of the young men who go through the program have been using video games as an escape for years, only to lose themselves in the process. But avoiding the Internet can be nearly impossible, and finding the right balance is a "constant struggle," one patient says. 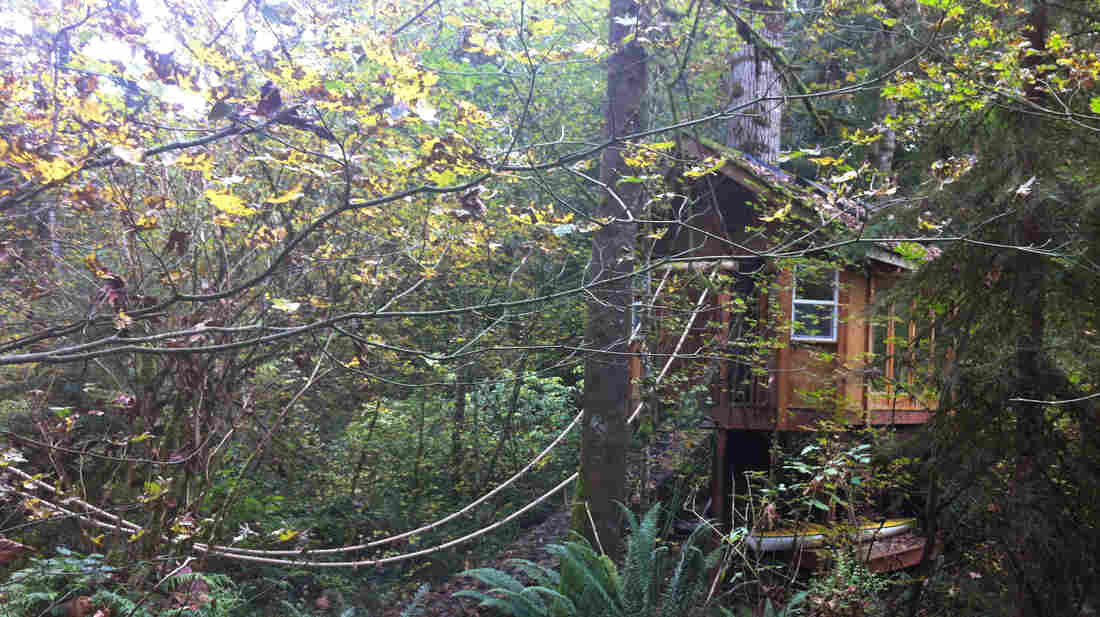 The reSTART center for Internet addiction is in the woods outside Seattle. The initial, inpatient part of the program is held on a property that has a treehouse and a garden. Rachel Martin/NPR hide caption 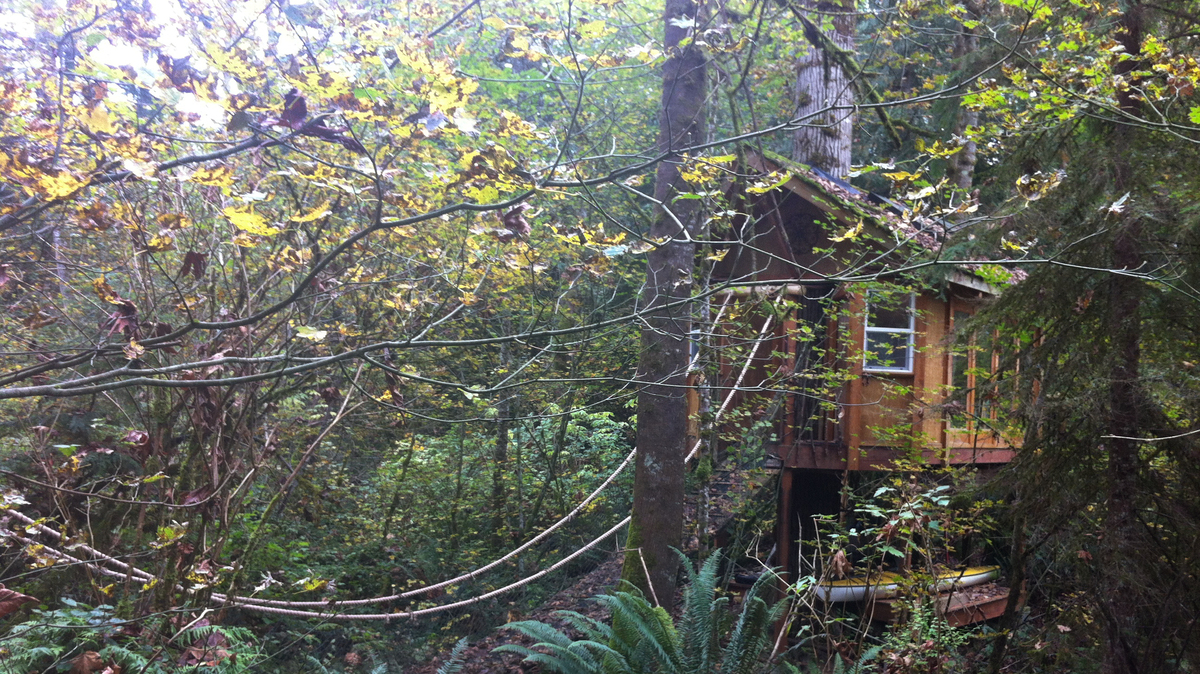 The reSTART center for Internet addiction is in the woods outside Seattle. The initial, inpatient part of the program is held on a property that has a treehouse and a garden.

A facility outside Seattle, surrounded by pine trees, is a refuge for addicts — of technology.

There are chickens, a garden and a big treehouse with a zip line. A few guys kick a soccer ball around between therapy appointments in the cottage's grassy backyard.

The reSTART center was set up in 2009. It treats all sorts of technology addictions, but most of the young men who come through here — and they are all young men — have the biggest problem with video games.

There are beds for seven patients at a time. After they spend six intensive weeks of rehab here, they go to a transitional situation — an apartment close by, where they live with other former reSTART patients.

That step used to be called Level 2, but program manager Rachell Montag says that was too similar to video game language, so they changed it.

"In gaming, the goal is always to be moving forward and leveling up, and so we didn't want our language to parallel that, because it can actually have an effect on their behavior and their recovery process in that phase," she tells NPR's Rachel Martin.

Joey M'Poko's story is like a lot of people who come through this place. His personal life was unstable and he moved around a lot. About six months ago, he came to the U.S., where his grandparents live. He was lonely, shy, insecure, and he found a kind of escape in front of his computer. 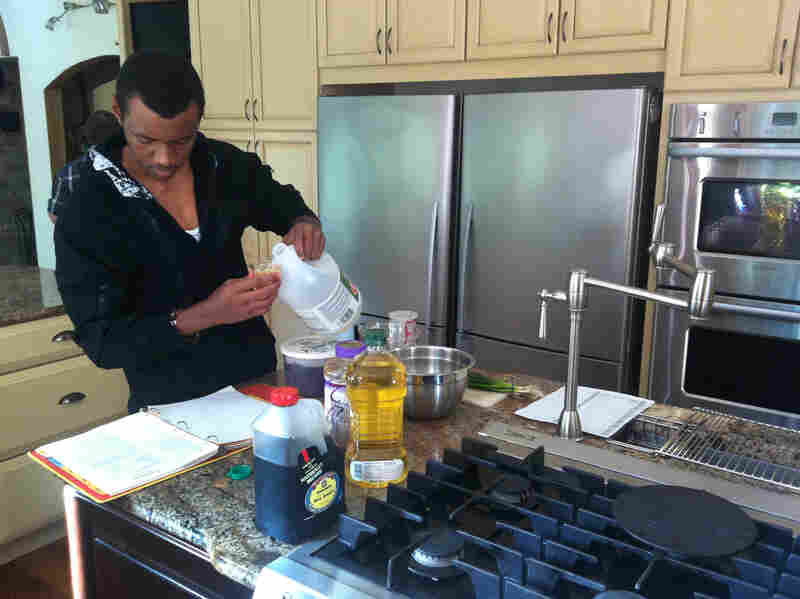 Joey M'Poko is a patient at the Washington facility, after finding himself unhealthfully immersed in a virtual community. Caitlin Dickerson/NPR hide caption 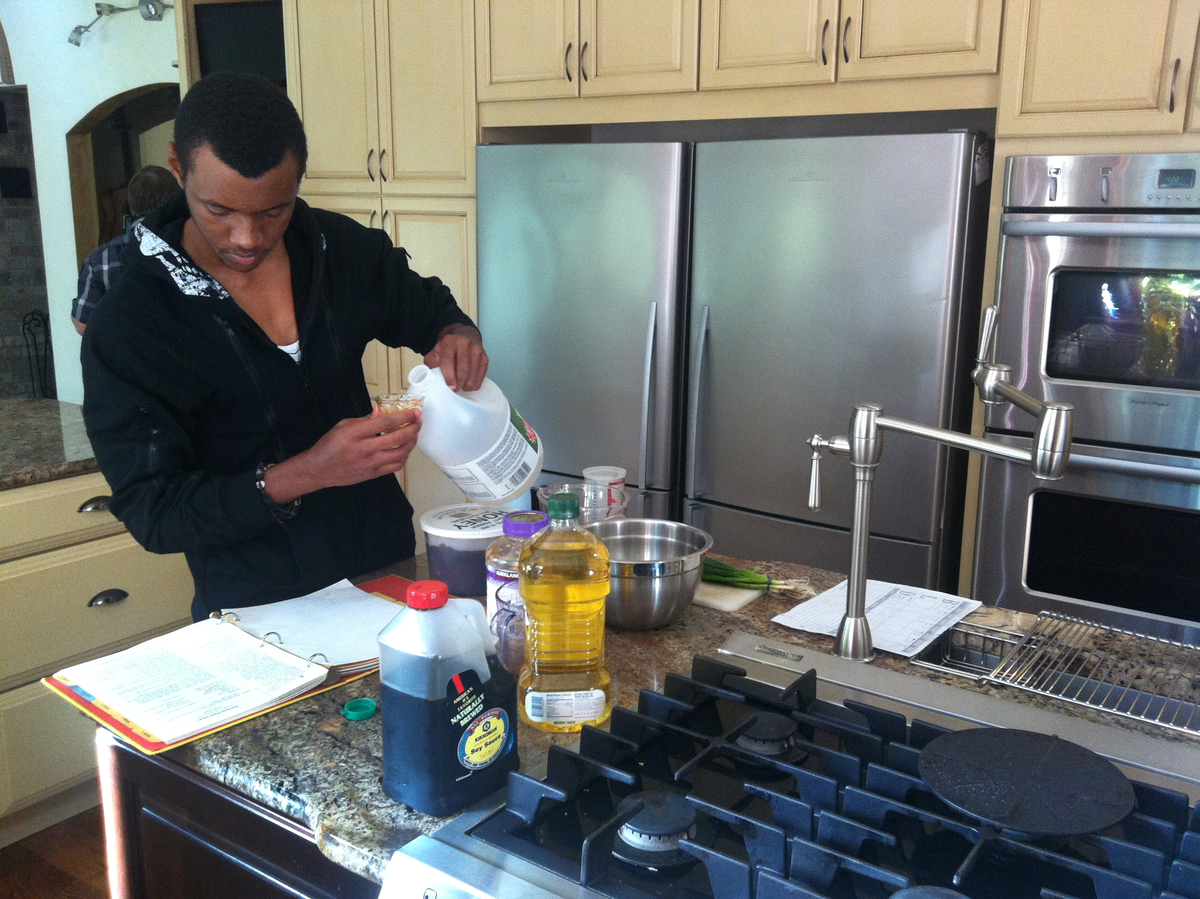 Joey M'Poko is a patient at the Washington facility, after finding himself unhealthfully immersed in a virtual community.

M'Poko says he would spend hours at a time gaming or watching movies. He says he had bad hygiene and lost weight — but he was a part of a virtual community.

"I mean, I have people I would consider to be friends there, only because I spent most of my time with them. I got to know them," he says.

The kicker here is that M'Poko thought he was doing pretty well, because a couple of years before, he was smoking a lot of pot. He started getting heavily into gaming as an alternative to getting high.

"It was just an environment to meet new people who had no interest in drugs or whatever — they're just looking for good, clean fun, I guess," he says.

M'Poko says he understands how using video games to escape can be damaging. But in his case, he says it made him "feel like socializing again."

"I started to feel like a person again. I could totally zone out all the pain, all whatever, and just go into this total world of fantasy, and it was awesome," he says. "I didn't have to care about anything else."

A 'Flood' Of Addiction

Hilarie Cash, who founded the rehab program, has been studying Internet and technology addiction since the 1990s. She noticed a pattern early on in her patients about how the Internet was affecting their lives.

"And [I] had this sense back then that I was seeing the trickle before the flood. And the flood is upon us," she says.

With Addiction, Breaking A Habit Means Resisting A 'Reflex'

But in today's increasingly digital world, it can be difficult to sense the point at which extensive Internet use actually becomes an addiction.

A common thread between all addictions, Cash says, is that addicts use the chemical or behavior to find either a high or relief. The behavior becomes an addiction when you are "doing it to such an extent that it begins to control you rather than you being able to control it," she says.

Are you getting enough exercise, sleep and quality time with the people you care about? "If [the behavior] is interfering, then there's a problem there somewhere," Cash says.

Typically, she says, those who come to her facility for help have been gaming from a young age, and the addiction has "been growing over many years." Also, they've been engaging in activity online rather than developing personal relationships.

Often, families will push their sons to limit their activity while they're living at home and going to high school. But once college hits, Cash says, that structure is lost. "And so that's when everything starts falling apart."

Building patients back up happens in a lot of ways. Some are very basic, like teaching them how to cook healthful meals. M'Poko is in the kitchen with a couple of the other patients, making Italian chicken and pasta for dinner with help from the house manager.

A big guy dressed in workout clothes walks in, with a bald head and a quick smile. There are high fives and friendly slaps on the back.

Isaac Veisburg was born in Venezuela and raised between there and Miami. He's all done with the reSTART program and is now working as a personal trainer. But it was a long road. He went through the six-week, inpatient part of the program twice.

"The first time, I was very guarded. I didn't want to hear the word 'addict.' As far as I was concerned, I could stop whenever I wanted," he says.

He bailed on the program after a few weeks and went back to college in Washington, D.C. At first he tried to stay away from gaming, but he was depressed, fighting with his parents and had car problems.

The stress started to mount, and the Saturday before classes even began, Veisburg was back in front of the computer. He says he downloaded a game and didn't leave his computer for 42 hours.

"And then I slept. I slept through my first class Monday, and I didn't go to class the rest of that day, and the day after, or for five weeks after that," he says.

His parents sent him back to the reSTART program, and eventually he finished the whole thing. Veisburg is now living in Redmond, Wash., hoping to eventually become a counselor for other people working through technology addiction.

He says he doesn't miss gaming — "not even a little bit" — or the people he used to interact with online.

"How well can you really know someone over the Internet? ... Out here is real relationships," he says, "the relationships I have with the guys in [reSTART], you know, with my girlfriend, with my parents, now that we can actually talk. Those are relationships."

Veisburg appears to be on the right track now, but not everyone's path is so clear.

The Need For A Plan

Nov. 5 is the anniversary of Will's arrival to the reSTART program. Will, who asked NPR not to use his last name, has had a series of relapses. At one point, he left the program and lived in a homeless shelter for a month. 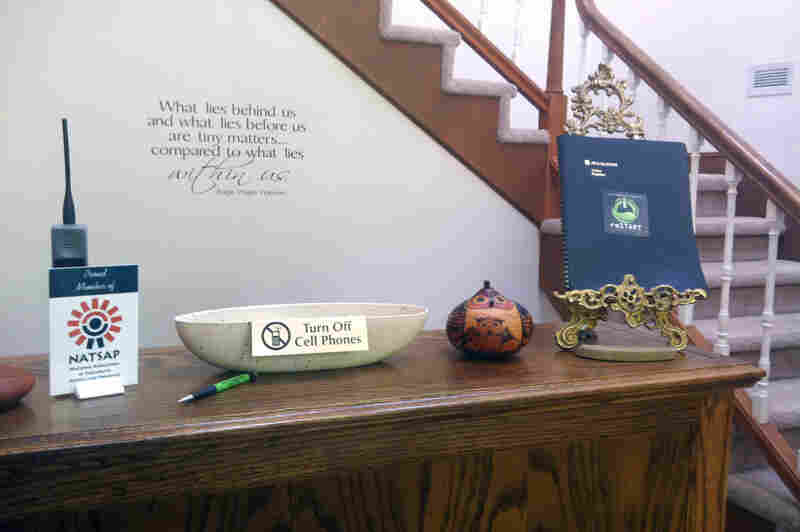 A sign inside the reSTART clinic asks that cellphones be turned off. Creating structure is key to patients' recovery once they leave the facility. Caitlin Dickerson/NPR hide caption 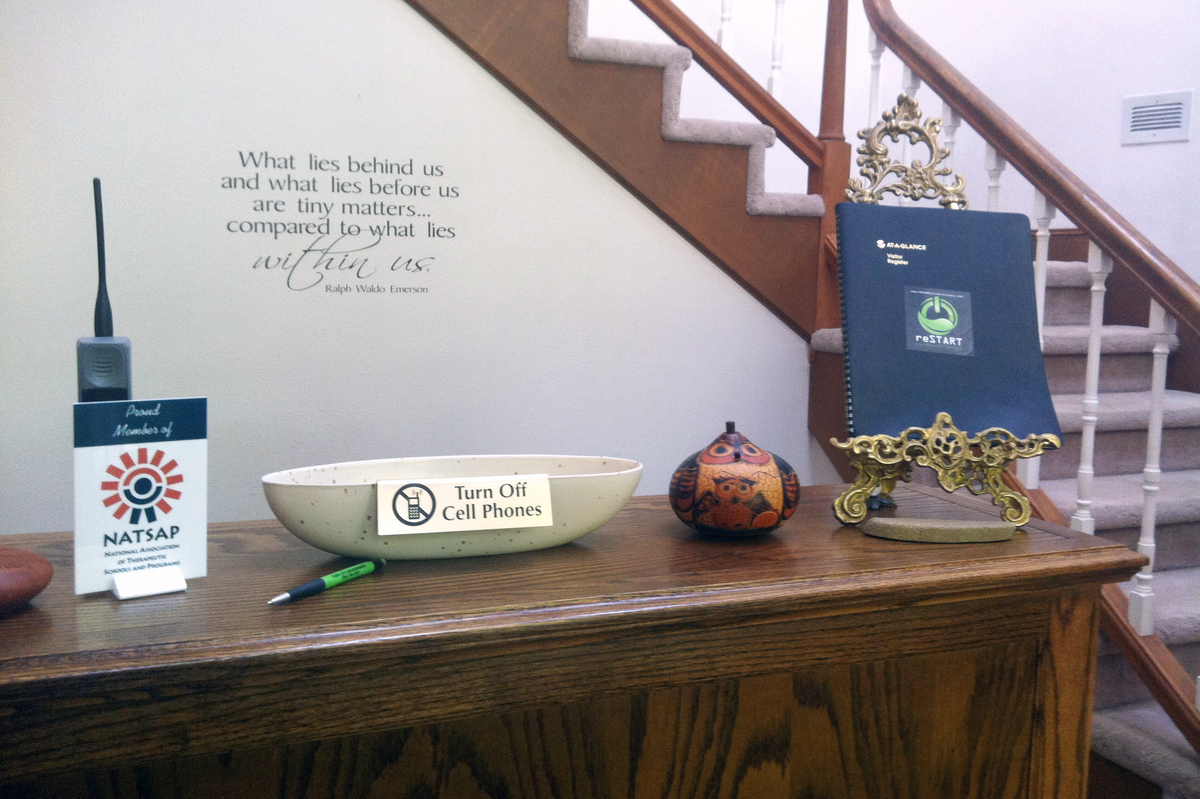 A sign inside the reSTART clinic asks that cellphones be turned off. Creating structure is key to patients' recovery once they leave the facility.

After a year in rehab, he's finally done and planning to move back home to Oklahoma to try to find a job. But that's tough to do without using a computer and an Internet connection.

"It's a constant struggle," he says. "It's just that I have to structure my life to a point where I don't feel tempted to waste time on it."

He says he has to hold himself accountable, by having a job, a social life and exercising — and by setting time limits on his Internet usage. He's not planning to get a smartphone anytime soon, either.

Cash, the head therapist and founder of reSTART, says those kinds of boundaries are crucial to any kind of addiction recovery. "All addictions, they say, it takes about two years for the brain to really heal itself," she says.

Before they leave, patients have to form a "life balance plan." They outline their goals and the possible pitfalls ahead.

"Once they leave here, they actually starting implementing that," Cash says. "What's hardest is implementing it successfully. But if they can do that for six months or more, then we're looking at somebody who has a really good shot at living a good, healthy life."

One Step At A Time

Finding that healthy balance also means learning to relax in new ways, which is why reSTART includes weekly meditation sessions. M'Poko is sitting with the rest of the patients in a semicircle in the living room. The instructor is in the middle, leading the meditation.

M'Poko is done with the inpatient program in a just a couple days. He's not sticking around for the second, transitional phase. He wants to move on now. He may move to Japan to teach English.

His family life is still shaky. His dad is moving back to his native Congo, his mom is in Vermont, and M'Poko doesn't know where home is anymore.

"Anyone who's been in a 12-step program or any kind of recovery program will tell you that the addiction is just a symptom of something else," he says. "I feel like I'm slowly cultivating skills that would help me deal with that and make me see that I don't have to escape, and it's much healthier and it feels much better to just ride the storm."

The audio of this story, as did a previous Web version, incorrectly identifies Joey M'Poko's parents as divorced and says that he ended up in Chicago a few years ago. In fact, his parents are not divorced, and he came to the U.S. about six months ago.