Accessibility links
With Addiction, Breaking A Habit Means Resisting A Reflex Addiction can come in a lot of forms, but the defining characteristics are the same. But Dr. Charles O'Brien, who's been studying addiction for years, says the treatment must fit the patient. Even with advances in medication, he says combining approaches is the most likely path to success. 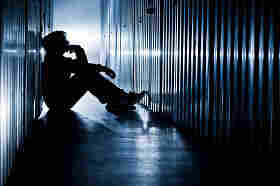 Addiction can come in a lot of forms, but the characteristics are the same. aurumarcus/Getty Images hide caption

The pull of addiction can come from many directions: from food to alcohol to the Internet. So what connects those dependencies?

"Addiction is a memory, it's a reflex. It's training your brain in something which is harmful to yourself," says Dr. Charles P. O'Brien, co-founder of the Center for Studies of Addiction at the University of Pennsylvania.

Brain imaging shows that associations with the addiction — pictures, odors or people — make the brain light up, even a month after a person has quit. "It's a reflex. They don't have to think about it," O'Brien tells Weekend Edition host Rachel Martin.

There have been many advances in treatment, he says, including medication that can minimize the euphoria an alcoholic feels when drinking. But O'Brien says combining various treatments is the best approach.

On whether Alcoholics Anonymous is effective

I tell all my students that they should learn about the AA groups in their area ... and they should be proud of it, because it's an American invention that doesn't make any money for anyone — it's free. It's not violent, and it only helps people.

And unfortunately, A.A. groups contain well-intentioned people, but they don't have the kind of information and training that they need to be good therapists. And I always refer all of my patients to an A.A. group as an adjunct — but it is not treatment.

We also have evidence from randomized trials showing that patient-treatment matching is in general the best way to go. So that means essentially, you evaluate the patient, you find out about their problems — whether they're marriage problems, depression problems or whatever — and then you focus on that in addition to the drinking. So patients are different, even though at its core, addiction is similar.

The unanswered questions about addiction

One of the most vexing problems for me is to see all the progress that's been made and to see how little this has permeated the medical profession and the specialists that run the treatment programs.

You know, there's a lot of rigidity in these therapists, and I think that something good is happening today since the people who framed the Affordable Care Act decided that all people with substance abuse disorders should be treated ... and I hope that doctors will begin to learn about the benefits of these new medications.

Does someone with a history of alcoholism have to give up drinking?

I think that, in general, the safest thing is to be totally abstinent. Now, what we've learned, based on scientific articles, is that going from being a very heavy drinker to just a moderate drinker is better for your health and for your behavior and so forth, but it's also risky.

So that those very heavy drinkers who don't become abstinent but rather just reduce the level of drinking, they're at a higher risk for slipping all the way back to the worst kind of drinking. So I tell my patients that the best thing is to totally stop.