Accessibility links
To Fix Climate Change, Scientists Turn To Hacking The Earth Some very mainstream scientists are saying that the climate change situation is so bad that saving life as we know it might require something radical: like shooting chemicals into the stratosphere or to protect earth from the sun or sucking carbon dioxide from out of the atmosphere. 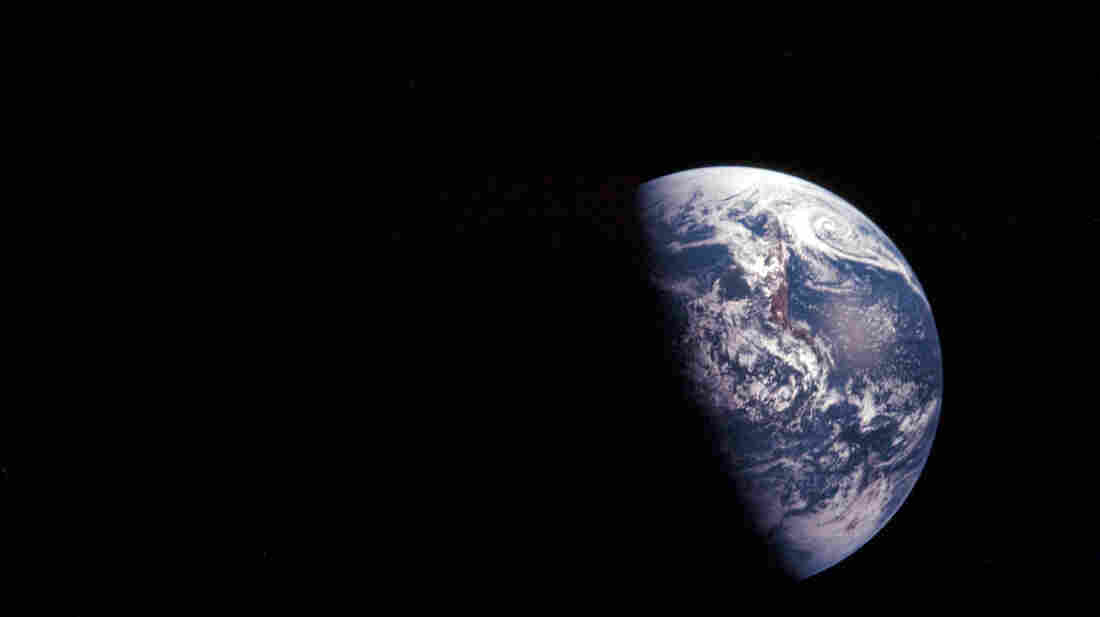 If Earth overheats, can it be artificially cooled? Should the effort begin now? Who would decide? The very idea of "geoengineering," and the unknown risks of tweaking our climate, leaves many scientists with more questions than answers. AP Photo/Courtesy of NASA hide caption 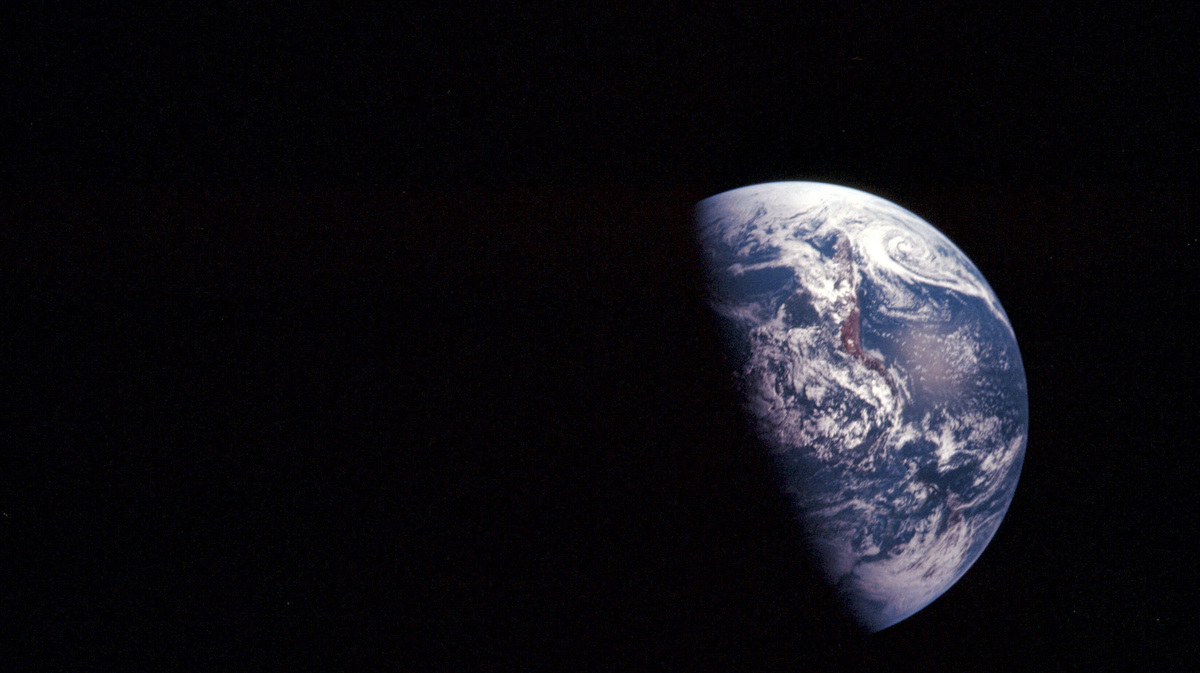 If Earth overheats, can it be artificially cooled? Should the effort begin now? Who would decide? The very idea of "geoengineering," and the unknown risks of tweaking our climate, leaves many scientists with more questions than answers.

In the summer of 2012, a small group of the Haida people, a native community in Canada, had a problem. The salmon they rely on were disappearing. So the Haida took matters into their own hands.

They partnered with an American businessman, drew up plans and then took a boat full of iron dust into the waters off their home island and put the dust in the ocean.

When they spread the iron dust, it created a big algae bloom. They hoped the algae would soak up carbon dioxide and bring back the fish.

The reaction to the experiment was immediate and negative, and described by some media as the "world's first rogue geoengineering project."

I can think of academics who agree on almost everything else in terms of science who are diametrically opposed on geoengineering.

While it scared a lot of people and angered a lot of scientists, this event could be a sign of what's to come. Some very mainstream scientists are saying the climate change situation is so bad that saving life as we know it might require something radical: like shooting chemicals into the stratosphere to protect Earth from the sun. In essence, these scientists are talking about hacking the climate.

In scientific circles, what the Haida did is called ocean fertilization. Jason McNamee, a spokesman for the group that carried out the experiment, says the goal was to protect the Haida people who live off the coast of Canada

"They get most of their protein straight out of the ocean," McNamee says. "What they have noticed over the last hundred or so years is that the fisheries have become less predictable and less abundant."

And while it's still unclear how successful the operation was scientifically, the legal and social backlash was immediately apparent. The Canadian government condemned the dump and has launched an investigation, seizing documents and data from the company's headquarters.

"So this is the really knotty problem," says Matthew Watson, a climate scientist at the University of Bristol, "if that experiment had been solely about salmon, nobody would have batted an eyelid. But because it was really about geoengineering, people got very worried."

Watson is also the author of the Reluctant Geoengineer blog.

People get scared because a lot of these plans sound like mad scientist schemes. Ocean fertilization is just one of a wide array of climate-engineering techniques out there.

One technique is to suck the carbon dioxide out from the atmosphere and put it somewhere else.

"You might do that by planting lots of trees or setting up machines that draw down CO2 and store it somewhere, or generating ocean fertilization where you add iron to the ocean and that generates phytoplankton, which locks up carbon dioxide," Watson tells NPR's Arun Rath. "The whole point is that you're trying to take CO2 out of the atmosphere and put it somewhere else."

A second technique is to try and reflect sunlight away from the Earth to keep the Earth cooler. You can do that, Watson says, by painting roofs white, through making natural clouds a little brighter or through volcanic aerosols.

In fact, there is evidence of volcanic eruptions that have dramatically lowered the temperature on Earth. Scientists want to replicate that. But the catch is that scientists haven't really tested either technique.

"For the most part we've got more questions than answers," Watson says. "It's a very emotive subject and a divisive subject. I can think of academics who agree on almost everything else in terms of science who are diametrically opposed on geoengineering."

Watson says that some people see it as a necessary evil to protect the environment and some see it as retention of the status quo, just trying to techno-fix our way out of what is already a technological problem.

If the schism in the science community weren't enough, Watson points out there are serious questions about the basic feasibility of actually using any of these techniques. What is already a divisive problem in the sciences is quickly becoming a governance nightmare.

"A better way to categorize the technologies might be by whether they have a local or global scale," he says. "In that case painting roofs white or planting trees might be done on a local scale, whereas things like volcanic aerosols and ocean fertilization act on your atmosphere, my atmosphere [and] the people in Bangladesh's atmosphere. And they're much less controllable because they have a global effect."

According to Watson, most governments have been slow to take on the issue of the potential global effects of climate engineering.

The Climate Change Elephant In The Room

"There are a number of environmental treaties that are relevant to doing this, but they are all rather narrow in the constraints and obligations they impose," Parson tells Rath. "So none of them would have the effect of the United States or China or any other country from doing this."

Parson says the Convention on Biological Diversity has adopted a couple of decisions that expressed disapproval of geoengineering technologies, but they are very vague and nonbinding. He says the U.S. and many other nations that haven't dealt with geoengineering are in a situation where it's difficult to even talk about it because of the potential for intense political controversy.

"One unfortunate consequence of that is that early, small-scale research that could help us understand more about whether these things would work, what risks they would pose and how you would do them most effectively, isn't really getting done," he says. "And that's really quite a risky situation.

"Because if we find ourselves in a situation where climate change gets really bad, and we're desperately looking around for something to do to make it less bad, if we haven't done the research at that point all we'll have is a set of kind of untested, un-risk-assessed, undeveloped options that are kind of crude to throw up in a hurry," he says.

By now you're probably thinking — what about the potential for harm? If scientists got their calculations wrong, it could be catastrophic for life on Earth. Or what if the technology got into the wrong hands? This is what Parson calls the "Dr. Evil" scenario, and fortunately he says it can't really work like that.

"Dr. Evil would have to have a great big airport and a supply chain and a bunch of airplanes going up all the time," he says. "There are probably only about 10 or 12 nation states that could actually sustain a program of changing the climate that wouldn't be trivial."

An Experiment With Unclear Results

One of the wild things about geoengineering is that even the scientists proposing it don't really want to do it. The need for it, says Matthew Watson, is just a sign of how bad things are.

"That's why I push the research agenda so hard," he says. "I'm pretty appalled by the thought of full-scale deployment, but I'm also pretty worried about burying our heads in the sand and not thinking about what that would mean."

But where does this leave the Haida people of Canada, and other communities already feeling the negative effects of climate change?

The actual results of the Canadian experiment are unclear.

What we do know is that it created an algae bloom visible from space. But what did the bloom do for the fish the Haida rely on? Even Jason McNamee can't say for sure what the result was.

"We don't know yet, we haven't gotten through all of our data," McNamee says. "But I can tell you this year ... Alaska had their best fishing year ever. They caught more this year than any other year in southeast Alaska."

Parson doesn't buy it and says fish stocks can fluctuate from year to year. He says that there is no basis for claiming that this intervention made any difference.

"The claims of the proponents that it usefully demonstrated how to do this, and that they could have generated carbon credits or brought back depleted salmon stocks have no basis," he says. "And indeed the intervention wasn't even controlled well enough for it be a defensible scientific experiment of any kind."

When asked if the Haida would do it again in the wake of the uproar about their ocean fertilization experiment, McNamee says they certainly would like to.

"But there have been an awful lot of concerns that have been raised by stakeholders," he says. "So would we like to do it again, as another research project? Absolutely."