Accessibility links
Volkswagen Union Opposed By Tennessee Republican Officials At auto plants, the tension is typically between the workers and the management. But not at Volkswagen in Chattanooga, where it's Republican officials who are trying to stand in the way. One of them is the Tennessee governor, who says a unionized plant might discourage other companies from coming to his state. 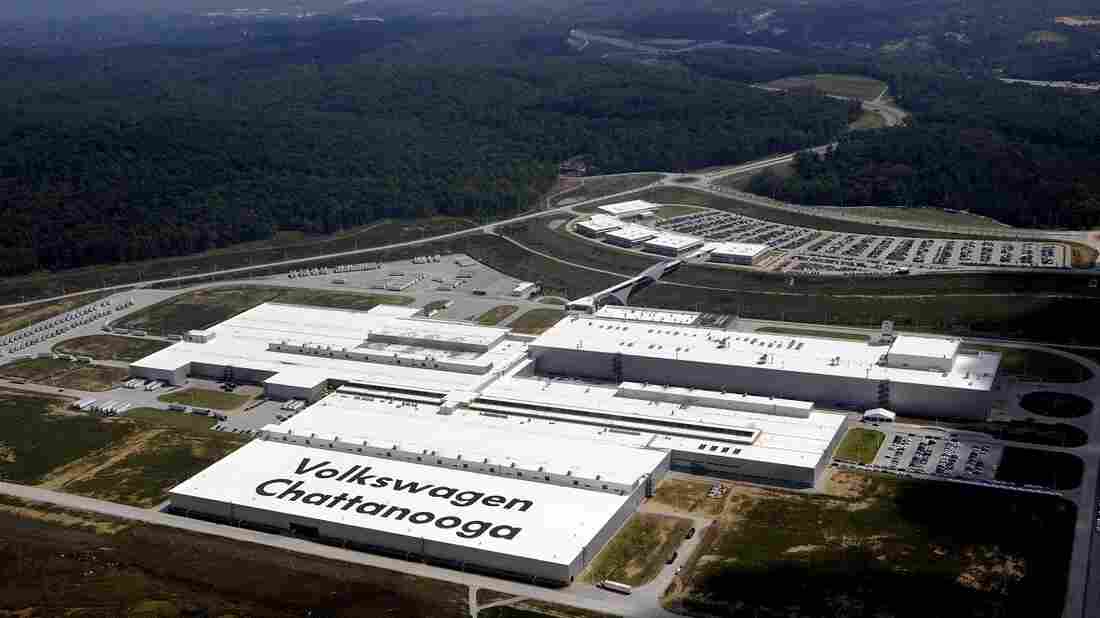 Volkswagen's car plant in Chattanooga, Tenn., is the company's only one in the U.S. It's also the only VW plant around the world without a workers union. Volkswagen hide caption 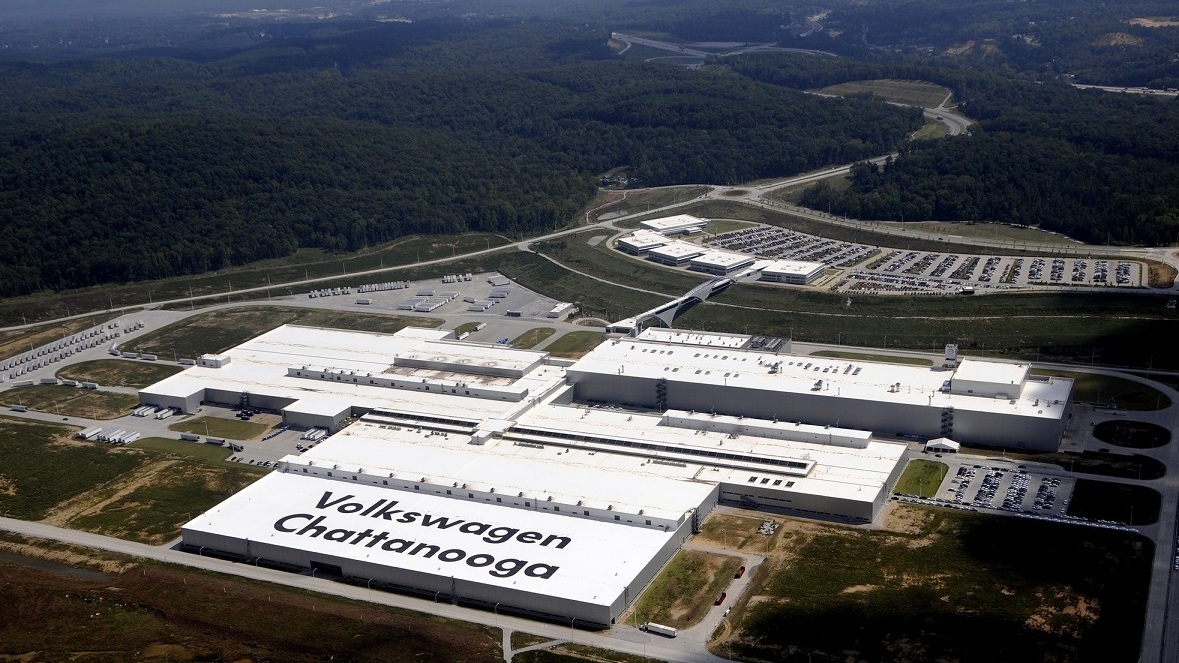 Volkswagen's car plant in Chattanooga, Tenn., is the company's only one in the U.S. It's also the only VW plant around the world without a workers union.

When it comes to union organizing at an auto plant, the tension is typically between the workers and the management. But not at Volkswagen in Tennessee. There, the United Auto Workers is attempting to finally unionize the automaker's first foreign-owned plant in the South. And so far, Republican officials are the ones trying to stand in the way.

Just outside Chattanooga, in an idyllic industrial park, surrounded by green hills and even a nature park, Volkswagen built a plant a few years ago. It is still Volkswagen's only car plant in the U.S. and also the only one of VW's plants around the world that hasn't been unionized. The company isn't trying that hard to keep workers from organizing here.

"I just really appreciate the neutrality we're getting from Volkswagen Germany. They have always maintained that it would be our choice," says Lauren Feinauer, an hourly worker in the plant that makes the Passat.

She is just off her shift, a pink bandanna tying back her hair. In her own Volkswagen, she props up UAW signs in the windshield and rear window while she's parked at work. She says the sunshade is to "encourage others in the plant to be comfortable with their support." 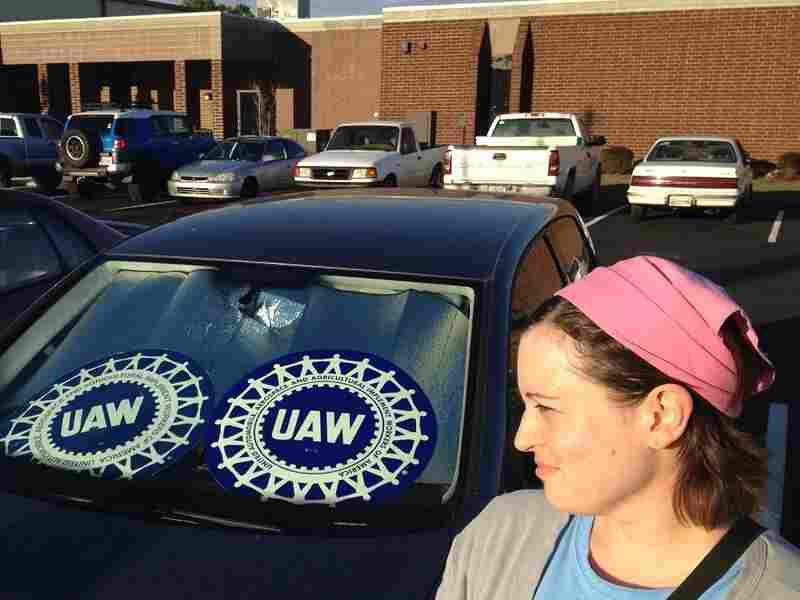 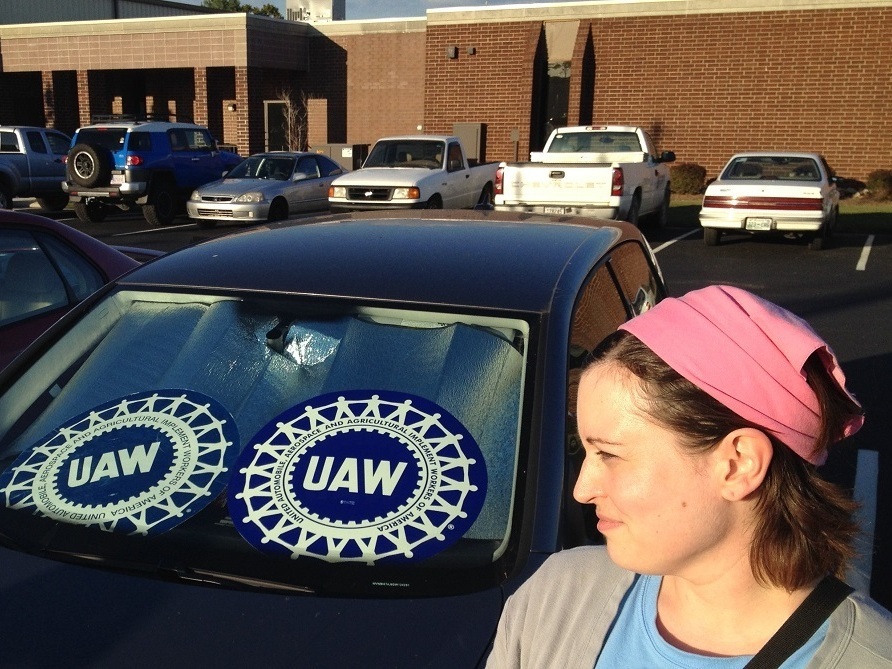 Lauren Feinauer works at the Chattanooga plant. She props UAW signs in the windshield and rear window while she's parked at work.

Feinauer has helped collect signed union cards from a majority of the 2,000 employees. Some workers, though, want nothing to do with the UAW. They haven't spoken much publicly, but a few have filed complaints with the National Labor Relations Board, arguing that Volkswagen is coercing them to organize.

Tennessee Gov. Bill Haslam has piped up on their behalf. Asked why he feels that's appropriate, he says, "One of the reasons is, we've had several prospective companies say that decision will impact whether we choose Tennessee or somewhere else."

The Republican governor says a slowdown in relocations to his state may be just the beginning. Companies like the region's right-to-work laws. No one has to be part of a union, so there aren't as many. That means fewer strikes and often lower pay. But the UAW is working the South harder than ever, with other campaigns at a Nissan plant in Mississippi and a Mercedes facility in Alabama.

U.S. Sen. Bob Corker, a Tennessee Republican who previously was the mayor of Chattanooga, suggests Volkswagen will be the "laughingstock" of the business world if it doesn't resist the UAW. He blames the union for the troubles at Chrysler and General Motors.

"I mean, look at Detroit," Corker says. "Look at what's happened. Look at all of the businesses that have left there. I mean, it's been phenomenal. It's sad."

UAW President Bob King has resisted raising his voice. "They get pressured by the right wing of the party. Unfortunately, that's a fear that these politicians have that overcomes common sense," he says. King is not an old-school, hell-raising union leader. In fact, he discourages any characterization of this as a "union fight."

To Climb In U.S., Volkswagen Gets Less German

"All the campaigns we have going on currently are being run very differently than we've run campaigns in the past," King says.

No more "us versus them." The pitch is all about cooperation and mutual benefit for workers and the company.

King says Tennessee's top Republicans have a standing offer to meet and discuss the labor movement's role in the 21st century. They haven't taken him up on it.

"You know, the truth is, the governor and the senator, they don't work on the floor at Volkswagen," says Jade Morgan, a single father of two boys who works on the overnight shift in Chattanooga. Morgan points out that both Haslam and Corker are multimillionaires who may never understand.

"It's not anybody who can walk in and work all night. It's tough," he says.

And ultimately, Morgan says, it's those who work in the plant who will get to decide whether the UAW is still worth having around.