Accessibility links
Getting Federal Benefits To Gay Couples: It's Complicated A Supreme Court ruling paved the way for same-sex married couples to receive federal benefits. Now Justice Department lawyers are working to make it happen. It's a challenge because they have more than 1,000 rules and laws to review. 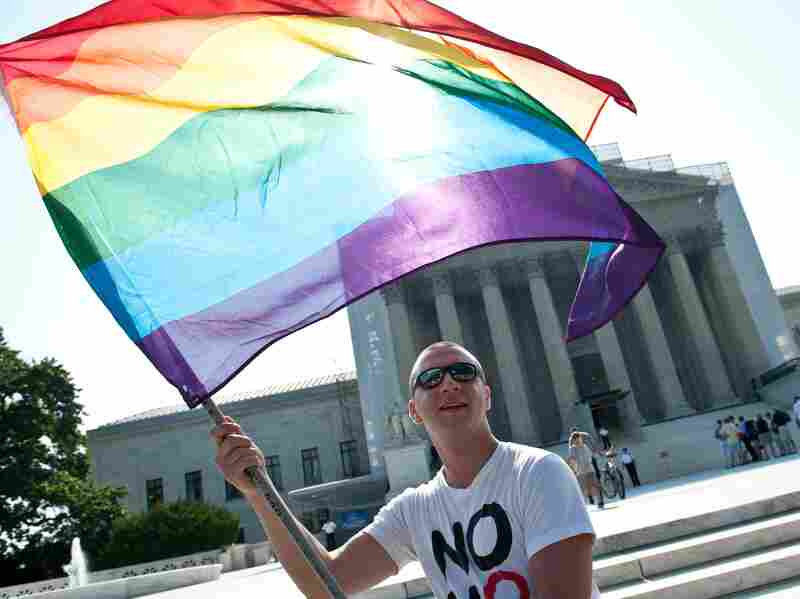 A gay rights activist waves a rainbow flag in front of the U.S. Supreme Court in June, a day before the ruling on the Defense of Marriage Act. Nicholas Kamm/AFP/Getty Images hide caption 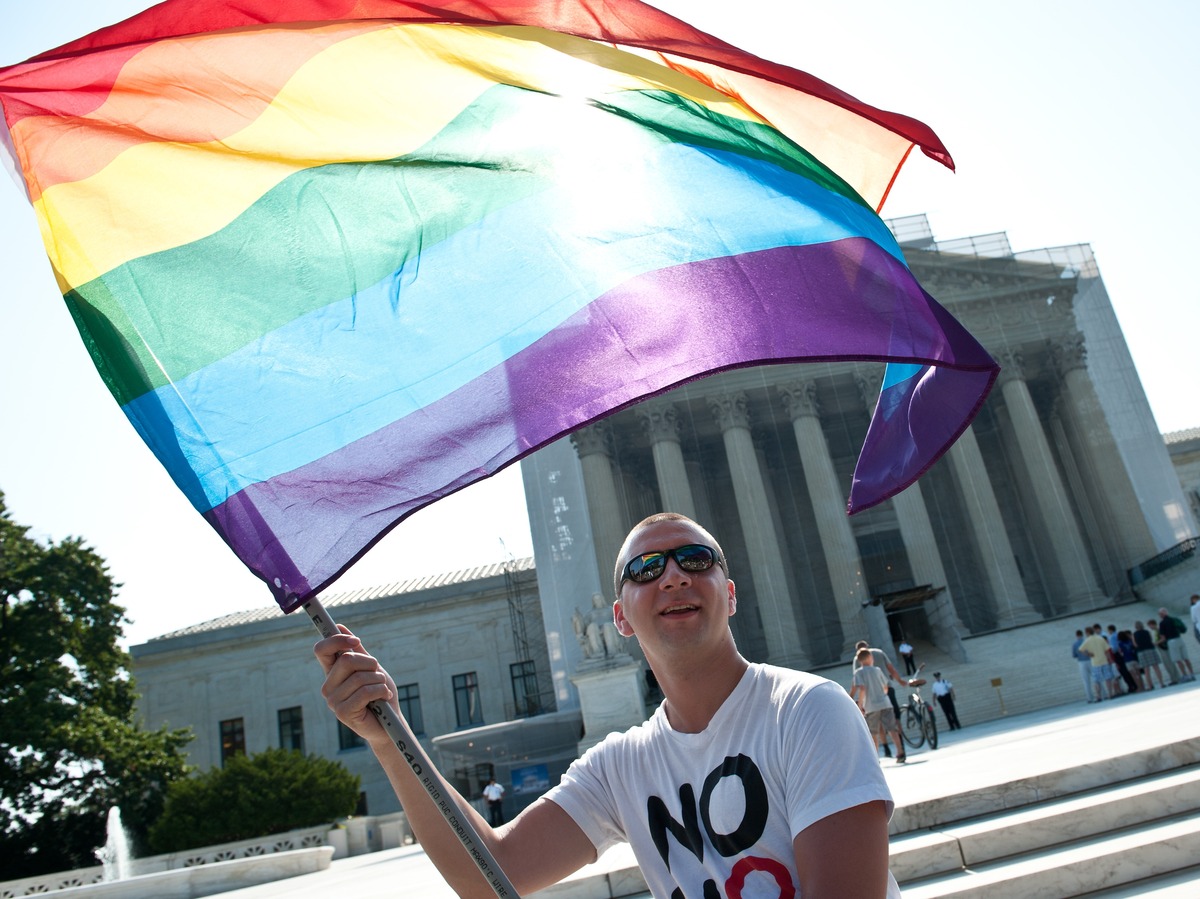 A gay rights activist waves a rainbow flag in front of the U.S. Supreme Court in June, a day before the ruling on the Defense of Marriage Act.

It has been four months since the U.S. Supreme Court struck down a law that defined marriage as between a man and a woman. The ruling paved the way for thousands of same-sex married couples to receive federal benefits, and a special group of government lawyers has been working to make that happen.

Their marching orders came from President Obama only hours after the high court threw out part of the Defense of Marriage Act. And the task was clear: review more than 1,000 rules and laws that cover all kinds of federal benefits to make sure gay and lesbian couples get their due.

"This is a civil rights matter," Attorney General Eric Holder says. "In many ways, I think it's akin to the struggle that African-Americans went through in the '50s and the '60s to demand equal treatment, to be allowed to enjoy all the benefits that flow to a person who is nothing more than an American citizen."

And many benefits are starting to flow. Federal employees in same-sex marriages can extend health and life insurance coverage to their spouses. Immigration authorities say they'll review petitions from people in same-sex relationships the same way they review requests from opposite-sex couples. And at the IRS, tax officials say legally married gay and lesbian couples can now file jointly.

"Obviously the decision generated a lot of excitement for a lot of people, but our job has been to make the promise of that decision, the words on the page in the Supreme Court's opinion, real for real people," says Assistant Attorney General Stuart Delery, who leads the effort to implement the Supreme Court ruling for the Justice Department.

Brian Moulton, legal director at the Human Rights Campaign, says the effort has moved swiftly, but there's still work to be done.

"The places where we still have big challenges, and we really haven't heard a lot are from two big agencies: the Department of Veterans Affairs and the Social Security Administration, where we believe there are statutory problems in extending those benefits fully to married couples who live in states that don't themselves recognize those marriages," Moulton says.

That situation is complicated because the Supreme Court struck down the part of the law that defines marriage as between one man and one woman but it did not create a universal right to marry. So that leaves up in the air what happens to same-sex couples who live in states that don't recognize their marriages. And it has put the federal government in a tricky spot when it comes to Social Security and other laws that mention a place where a couple lives — or "domicile" — as a key factor in determining spousal benefits.

How The End Of DOMA Will Affect Obamacare, Federal Employees June 26, 2013

Associate Attorney General Tony West says many of the legal issues the Justice Department has faced were relatively straightforward. "And then," West adds, "there are harder questions. There are questions like, whether or not those benefits turn on whether the place of domicile or the place of celebration is at issue. What are you going to look to, to assess the validity of marriage in order to extend those federal benefits?"

Advocates are still anxiously waiting for answers on Social Security and the VA. Ultimately, Congress may need to weigh in to change the language in those laws. But even in cases where the Obama administration has spoken, there's been some pushback from states.

Moulton says same-sex couples in five states have been forced to travel to federal facilities, sometimes long drives away, to enroll in federal benefit programs for National Guard members.

"It does seem, you know, a little perplexing, particularly because these are federal benefits programs that are paid for with federal money and run by the federal government," he says. "It's really a question of enrollment and it's unfortunate to see that some of these states really seem to be politicking a little bit on this issue."

Moulton says he expects more friction with Medicaid enrollment, too. Even though federal health officials say same-sex couples should get those benefits, states administer the program jointly and could have a different view. And states where gay marriage is outlawed could make it harder for same-sex couples at tax time next year, too.

History, he says, is on the side of same-sex couples.