Accessibility links
At Guantanamo, 'Sketching' Defendants, Witnesses And KSM's Nose Janet Hamlin was the only courtroom sketch artist allowed at the Guantanamo Bay military tribunals in 2006. Her work has been collected in a new book, Sketching Guantanamo — and she tells NPR's Renee Montagne that getting Khalid Sheikh Mohammed's nose right ended up being a challenge.

When the 2006 secretive military tribunals at Guantanamo Bay began, only one courtroom sketch artist was allowed in. Her name is Janet Hamlin. 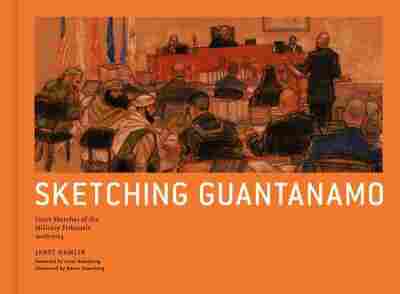 The Associated Press sent her there. Since then, Hamlin has created a rare visual record of the human drama unfolding in Guantanamo's courtrooms. Those images are now collected in a book, Sketching Guantanamo.

The sketches are mostly of the men accused of acts of terrorism, including the Sept. 11 detainees. But there are also Sept. 11 families looking on, and courtrooms crowded with defense lawyers, prosecutors and witnesses.

Some of Hamlin's most compelling sketches are richly detailed portraits of the youngest defendent, Omar Khadr, who was 15 when he arrived at Guantanamo. Born in Canada, Khadr spent much of his childhood in Pakistan — his father was involved with Osama bin Laden. In 2002, Khadr was captured in Afghanistan, accused of killing an American army medic in a firefight.

Hamlin tells NPR's Renee Montagne that when she first saw Khadr, "he had that teenaged look. He had civilian clothes on, and had teen tennis shoes, and I remember he had this plaid shirt. The next year, he was in a khaki uniform, and his hair had grown out, and he seemed frustrated and angry. Then, the following year, he seemed to be engaged, and congenial, and involved."

On the emotional moments of Khadr's trial

That was very dramatic. He was sitting down, and all of a sudden he stood up ... he was basically apologizing. It was a real surprise, and it was a very moving moment in that courtroom ... [the medic's widow] is crying and she's saying, "no no no no," shaking her head ... that there was nothing, she was not going to accept it, she wasn't going to believe it. She was emphatic. I don't think there were too many dry eyes in that court, on all sides.

Everybody was quite surprised the first time we saw him, because his beard had gone very grey, it was very Merlinesque. He had lost weight, substantial weight, and he was in a white uniform, you know, prison garb. And I had to make a point of getting his likeness right away. And from a distance that was a bit difficult, and that led to a sort of awkward moment in my courtroom drawing career, because Khalid Sheikh Mohammed actually did not want it to go out, saying that the nose was all wrong. He said, "tell her to go get my FBI photo off the internet, use that as a reference, and touch it up before it can be moved" ... It was an opportunity to do a better job. It was not the best likeness. But that became almost, it felt almost as big of a story, or close to it, as the fact that the world was seeing him, was the fact that he could censor or make such a change.

The first time we saw him with the red beard, it was rusty brown, it was a little odd, but it was different. And then it started getting more garish, and more like a Hawaiian Punch tone ... people were asking, okay, what's going on here? Well, finally the fruit juice and berries or something was the explanation for that kind of vivid color he was getting.

On sketching the prison outside the courtrooms

There's a few things that surprised me. There was the fact that they have these soccer fields, or these kind of recreational areas. They have Game Boys, TVs, DVDs, a library in different languages. They insisted on doing their own laundry, a lot of them, so you see laundry hanging out ... there's classrooms, there's art lessons, language lessons.