Accessibility links
Antibiotics Can't Keep Up With 'Nightmare' Superbugs On Tuesday night, PBS' Frontline will investigate how decades of antibiotic overuse has led to the emergence of drug-resistant bacteria. Journalist David Hoffman says that understanding and fighting these bacteria should be a national priority. 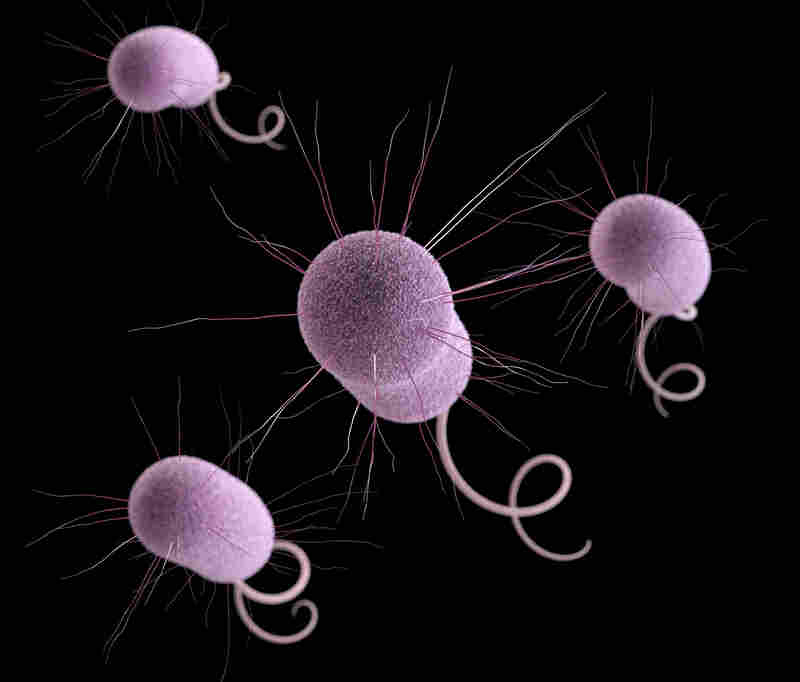 On Tuesday night, PBS' Frontline will investigate how decades of antibiotic overuse has led to the emergence of drug-resistant superbugs. Courtesy of Centers for Disease Control and Prevention hide caption

toggle caption
Courtesy of Centers for Disease Control and Prevention

We're used to relying on antibiotics to cure bacterial infections. But there are now strains of bacteria that are resistant to even the strongest antibiotics, and are causing deadly infections. According to the CDC, "more than 2 million people in the United States every year get infected with a resistant bacteria, and about 23,000 people die from it," journalist David Hoffman tells Fresh Air's Terry Gross.

Many people are familiar with the type of resistant infections often acquired in hospitals, caused by MRSA, the acronym for methicillin-resistant Staphylococcus aureus. But most people don't know about the entirely different group of resistant bacteria that Hoffman reports on in Hunting the Nightmare Bacteria, airing Tuesday on PBS' Frontline. The show explores an outbreak of resistant bacteria at one of the most prestigious hospitals in the U.S., and explains why there is surprisingly little research being conducted into new antibiotics to combat these new superbugs.

"We really have a big information black hole about these really, really dangerous bacteria, and we need to know more, and it ought to be a national priority," Hoffman says.

On how bacteria have evolved to be resistant to our antibiotics

Bacteria have been training at this for a long, long time. I think when a lot of people took antibiotics in the '50s and '60s, there was a lot of talk then about "miracle drugs" and "wonder drugs" ... Had we basically pushed back those evolutionary forces? Had we essentially found a way to avoid infectious disease? Well, what we're seeing is this evolutionary process in bacteria. It's relentless, and what happened here was [that] bacteria learned to basically teach each other to swap these enzymes and help each other learn how to beat back our best antibiotics; our last-resort antibiotics didn't work. ...

In the period before World War II ... people that got infections, they had to cut it out. They had to cut off limbs, cut off toes, because there weren't antibiotics. And oftentimes, when people talk about the fact that we might have to go back to a pre-antibiotic age, that's what they mean — that a simple scrape on the playground could be fatal.

[In the '50s and '60s] I think there was something like 150 classes of new antibiotics. And although there were warnings then that if we misused them that resistance would grow, you could just see in the marketplace new ones coming on every couple of years. ... I think we got very, very complacent. ... In the '80s and particularly in the '90s we went around the bend a little bit because the science didn't continue to produce new antibiotics at that rate, and the economics of drug development changed rather remarkably. ...

We're bombarded with advertisements that there are drugs now to treat chronic diseases ... that you would take for the rest of your life. And you can imagine, if you're in drug development, if you create and invent one of these drugs that can tackle a chronic disease that people will take forever, the return on investment for the drug companies to develop those big blockbuster drugs ... that became irresistible.

But think about antibiotics. If they're taken properly, you take them only for a short course, a couple of weeks maybe, and then you stop and you forget it, you get better. ... So the economics of making antibiotics wasn't going to make these big profits for the drug companies. And slowly, but with increasing frequency, they begun to pull out of research on antibiotics. 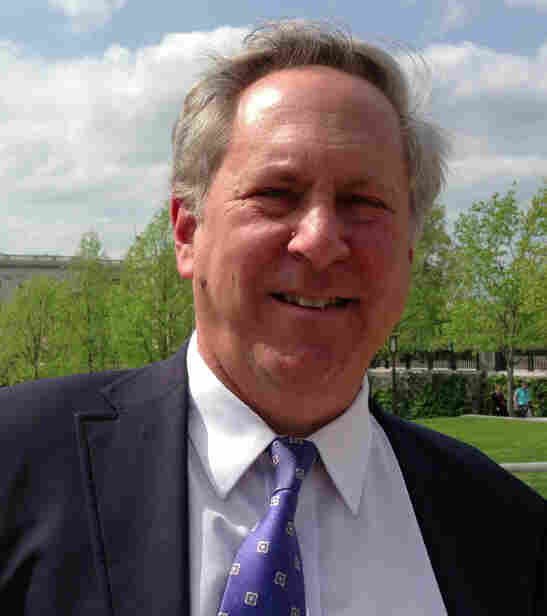 One feature of [some antibiotic-resistant] bacteria is that they have kind of a hard armor around them, a shell, which protects them from antibiotics. They also have the ability to pump out the antibiotics or to basically chew it up inside. These ... are very, very difficult to treat; you just don't have antibiotics for them. ...

NDM-1 [an enzyme that makes bacteria antibiotic-resistant] has a very, very unusual but worrisome characteristic, and that is this: It has a mechanism to transfer its genes — its genetic material — which helps it resist antibiotics. It can transform that to other bugs. It can walk around like a coach, giving training and directions to other bacteria ... helping other bacteria become resistant to antibiotics ... teaching them how to do it. ...

NDM-1 is now spreading in the United States. ... There have been 16 cases, and the year before the numbers doubled in a year. You know, it's not an epidemic or anything, but these things are popping up now with more and more frequency in hospitals and in patients around the United States. It's here.

This clinical center is a very sophisticated research hospital. Patients are invited there because of research programs going on in the many different institutes of the National Institutes of Heath. It's not a hospital you walk into with a sore throat.

They had enrolled and invited a patient from New York, a woman who had had a major operation, and she was invited for a particular study that they needed to do. When they came they looked at her chart, and they had no warning, but the chart said that this woman had this drug-resistant bacteria ... which they had never seen before. This is a resistant [bacteria] called KPC; it's resistant to some of our most modern, last resort ... antibiotics. They did what they could to prevent this bacteria from spreading. They put her in what's called "enhanced contact isolation." Gloves and gowns for everybody, put her at the end of the ICU in her own room, and they went through with the research they had to do. And after a month ... she seemed to survive it; she was discharged. Everybody at the clinical center breathed a sigh of relief. ...

The first thing that they thought was: Maybe it's just in the environment, maybe it was on door handles, maybe it was on a doctor's hands or gloves. ... So they began to clean a lot of things. ... They did everything they could to bleach and clean and make sure they could stop it and they still didn't stop it; it started to continue to spread.

Then there was a couple weeks of quiet. And then a really, really, surprising thing happened. This particular bacteria started to show up in other patients in routine surveillance of the patients. Suddenly, in the microbiology lab they're beginning to see this thing, and none of these other patients had any contact with the first one. ... So where was this bug? Where was the mechanism that it was moving around? And that was a real crisis. ...

So they went through a series of phases of this war that they carried out to try to deal with this. The first thing that they thought was: Maybe it's just in the environment; maybe it was on door handles; maybe it was on a doctor's hands or gloves. ... So they began to clean a lot of things. ... They did everything they could to bleach and clean and make sure they could stop it, and they still didn't stop it; it started to continue to spread. ...

[They approached a team of genomics specialists, and] the people in genomics had some very tentative early experience of taking a bacteria and taking a look at its entire genetic blueprint. ... So they took a couple samples of this bug that was racing around ... and they started running it through the computers. It takes a while, it took a couple of weeks, but when they got the results back, everybody was completely stunned. ... The results showed that the bug had jumped from patient No. 1 to several other people, and it had jumped by being carried by people who didn't get sick from it. They found out that there were intermediaries, or silent carriers, that were spreading it around. To this day we don't know [if] the silent carriers were other patients [or] hospital workers. They began to see that this wasn't so much a problem of KPC being in the environment as it was people were moving it around.

In other countries, take Canada for example, outbreaks are routinely announced by the hospitals. In the European Union they are tracking the rise of resistant [bacteria] in a way that we aren't ... I think a little more better tracking, better information and transparency would make us all more sensitive to these things and maybe wake us up a little bit from this complacency that we got to "miracle drugs" in the '50s and '60s, and realize [that] this is a very, very precarious and precious thing we have. We need to act that way. ...

The data, the information on this entire thread is very, very slim. There is not a national surveillance system reporting to the CDC on these new kinds of infections, and it's something we really need. I think it's something the government knows we need, and we don't have it. There are a few states that require reporting on these kinds of infections. A few require some hospitals to report, and you know, after last March when the head of the CDC first spoke out and called these things "nightmare bacteria" a couple more states signed up and required their hospitals to begin reporting. You can't go to any single place and find out what's going on. ... The last I checked only about 16 hospitals were participating.