Accessibility links
Despite Efforts, The Rio Grande Is One Dirty Border Since Mexico and the United States signed the North American Free Trade Agreement 20 years ago, the two countries have worked to clean up the waterway. The river makes up a large chunk of the border, but despite progress, massive amounts of raw sewage still enter the water each day. 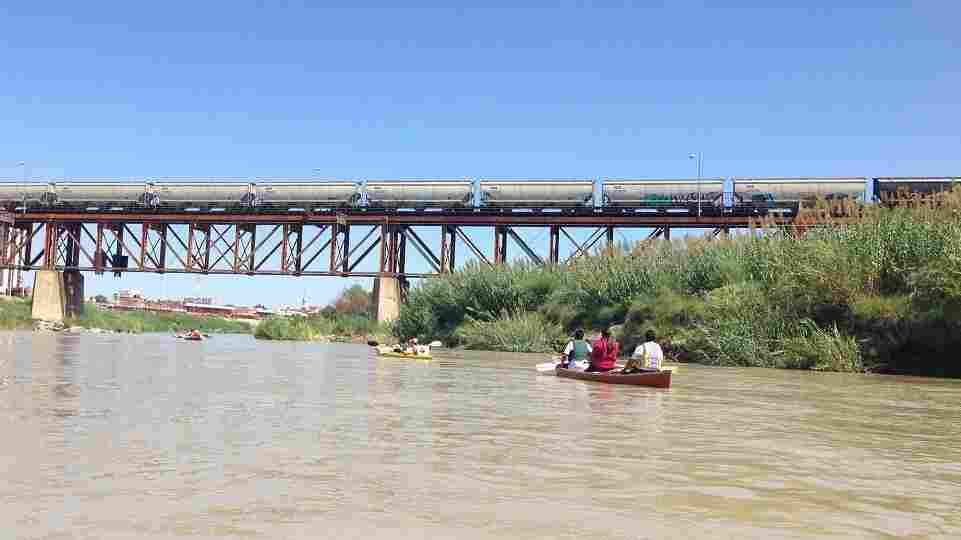 Kayakers head out on the Rio Grande toward one of the international bridges that connect Laredo, Texas, and the town of Nuevo Laredo in Mexico. Raw sewage and animal carcasses float in the water. Neena Satija/Texas Tribune hide caption 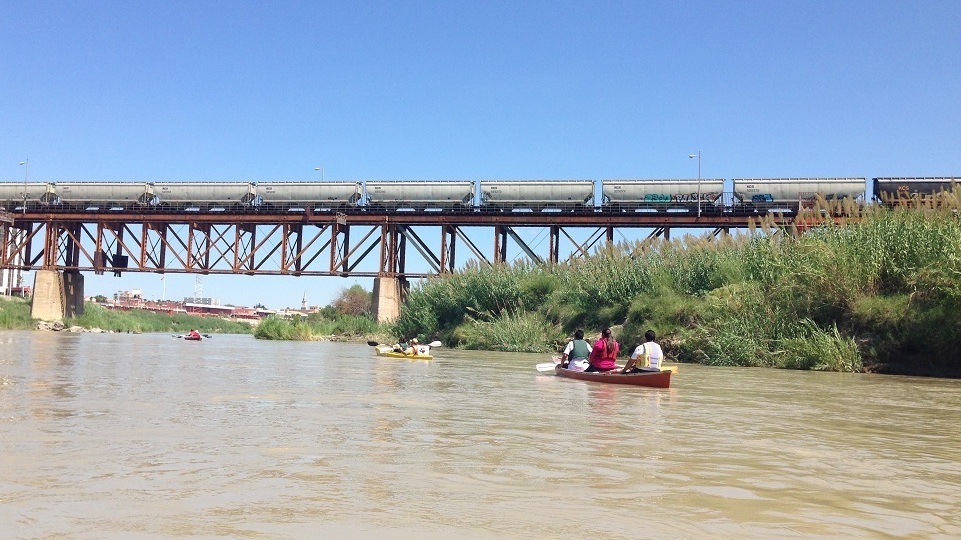 Kayakers head out on the Rio Grande toward one of the international bridges that connect Laredo, Texas, and the town of Nuevo Laredo in Mexico. Raw sewage and animal carcasses float in the water.

There's one easy way to find out how bad the water quality is in the Rio Grande: get into a kayak.

Paddle through chocolate brown water in Laredo and the overwhelming smell makes it hard to breathe. A dog's carcass floats by; there are many dead fish, too.

In 1994, Mexico and the U.S. signed the North American Free Trade Agreement. Since then, the two countries have worked to clean up the river that makes up 1,200 miles of their shared border. Despite those efforts, raw sewage still joins the water flow each day.

"I think it's a mess. It's horrible," says Mike Montemayor, a commissioner for Webb County, Texas.

The Rio Grande forms the border between Texas and Mexico. Starting in the Rocky Mountains, it winds 1,900 miles south to the Gulf of Mexico, making it the fifth-longest river in North America. Under a treaty signed in 1944, the U.S. and Mexico agreed to keep the river flowing and share its water. — Rae Bichell

Tom Vaughan, who teaches biology at Texas A&M International University, has studied water quality in the Rio Grande for decades. The levels of E. coli bacteria here, he says, are off the charts. Federal regulations allow swimming and fishing in water that has a minuscule amount of E. coli.

"Certainly, what we're in right now, the E. coli is in the thousands," Vaughan says.

Normally, the Environmental Protection Agency would get involved in a water quality issue like this one. But the Rio Grande is unique because it straddles two countries, and this raw sewage comes from Mexico, in Nuevo Laredo.

Instead, the responsibility falls on the U.S. International Boundary and Water Commission, a part of the U.S. State Department that works on boundary issues with neighboring countries like Mexico.

Adolfo Mata, program manager for the Laredo field office, says that 20 years ago Nuevo Laredo didn't treat any of its sewage. The Rio Grande was so dirty that people actually died from swimming in it.

The $60 million plant has made a huge difference. But every day, at least 5 million gallons of raw sewage enter the water. Many parts of Nuevo Laredo still aren't connected to the sewer system, and some pipes need repairs.

Mata says he often meets with his Mexican counterpart to work on solutions, but that's not happening fast enough for some Texas towns.

Amanda Perez, a commissioner for Rio Bravo, Texas, was on the kayak tour down the river. She says her 3-year-old kept getting a stomachache, presumably from bathing in dirty water. She thought it was a coincidence, but whenever she brought her child to the doctor, Perez says, it was filled with other children with stomachaches. "I thought, 'Oh my God, it's an epidemic,' " she says.

Cleaning this dirty water is expensive, and Rio Bravo's water treatment plant can't keep up. The water in the town tested positive for E. coli recently, and for almost a month, thousands of residents in the region were told to boil their tap water. But even though the boil order has been lifted, Perez won't even give the water to her dog to drink.

"I had no idea that this was so, so terrible and so dangerous to our environment and to our water," Perez says. "I don't have words to explain it. I did not believe it was that bad."

Environmentalists say in the wake of NAFTA 20 years ago, the U.S. and Mexico had the political will to start cleaning up the Rio Grande. The question now is whether there's momentum to finish the job.