Accessibility links
For John Kander, A New 'Landing' At A Familiar Spot The 86-year-old Broadway titan — who co-wrote such hits as Cabaret and Chicago with the late Fred Ebb — is back with a new show and a new writing partner, 35-year-old Greg Pierce. 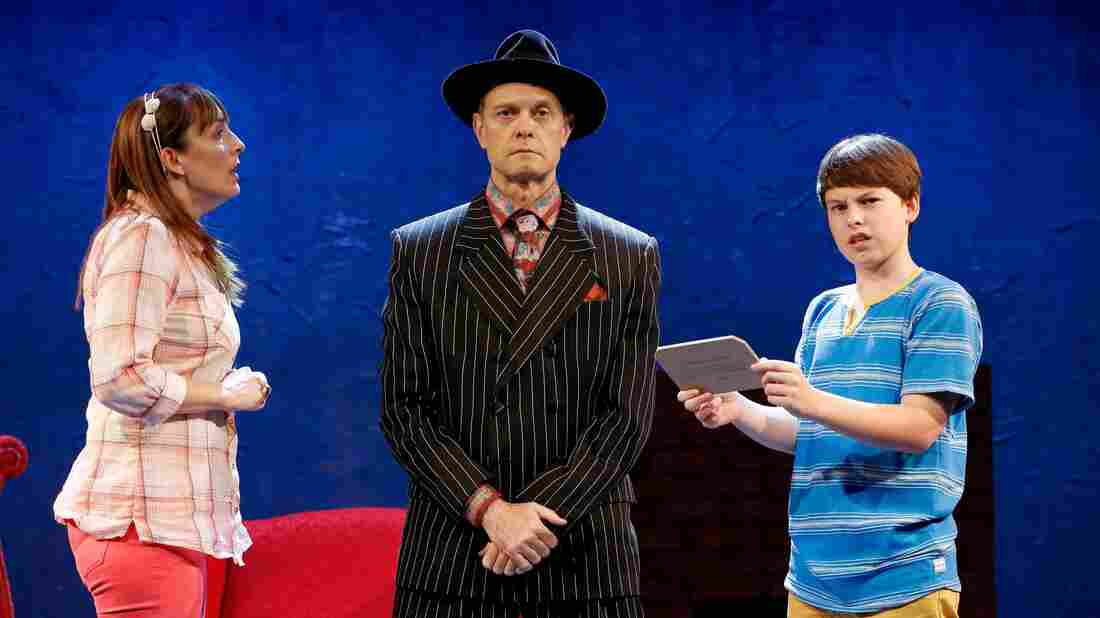 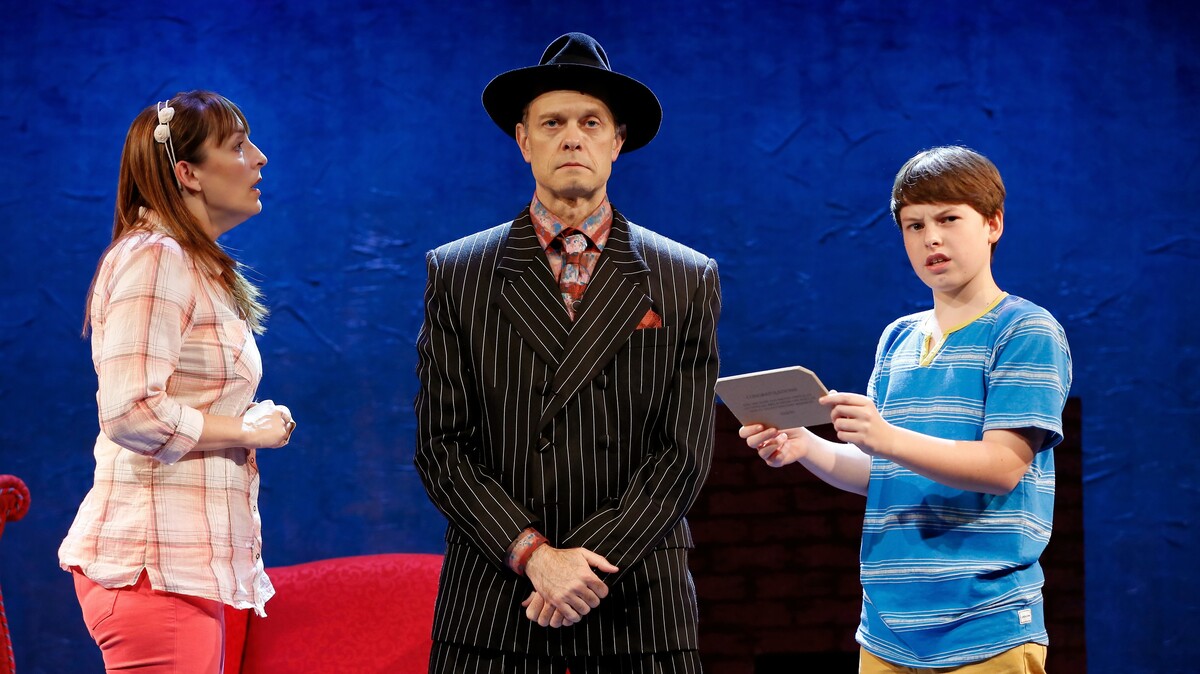 David Hyde Pierce (center), Julia Murney and Frankie Seratch star in The Landing, a new musical from Broadway veteran John Kander, who co-wrote it with Greg Pierce. David Hyde Pierce previously starred in one of the latter collaborations between Kander and his late songwriting partner, Fred Ebb — the 2006 musical Curtains.

Broadway composer John Kander is a living legend: With his songwriting partner, the late Fred Ebb, he created the scores for the smash hit musicals Cabaret and Chicago, as well as the enduring anthem "New York, New York."

Now, at 86, Kander has a new writing partner — and a new musical, The Landing, opening off-Broadway Wednesday.

For a guy with such an illustrious history, Kander isn't terribly nostalgic. He's a writer, and he likes to write. And despite the pain of losing a collaborator of more 40 years, he knew the time had come to move on.

"Fred and I had a wonderful long time together, and it was a huge part of my life, but life goes on," Kander says. "And I never thought about living in the past. I just don't."

So a few years ago, Kander called up Greg Pierce, a young playwright and short-story author he'd been mentoring, and asked him if he wanted to work on a small-scale musical.

And that was OK with Pierce.

"When I got that phone call from John, I mean — that was one of the most exciting phone calls I've ever gotten," he says. "And the thought had crossed my mind that maybe we could work together. I would never have asked him, because of, you know, where I was and where he is. [But] it's just been a real joy. Every work session has been a joy."

And working with the 35-year-old playwright has made Kander approach composing with a new vigor. 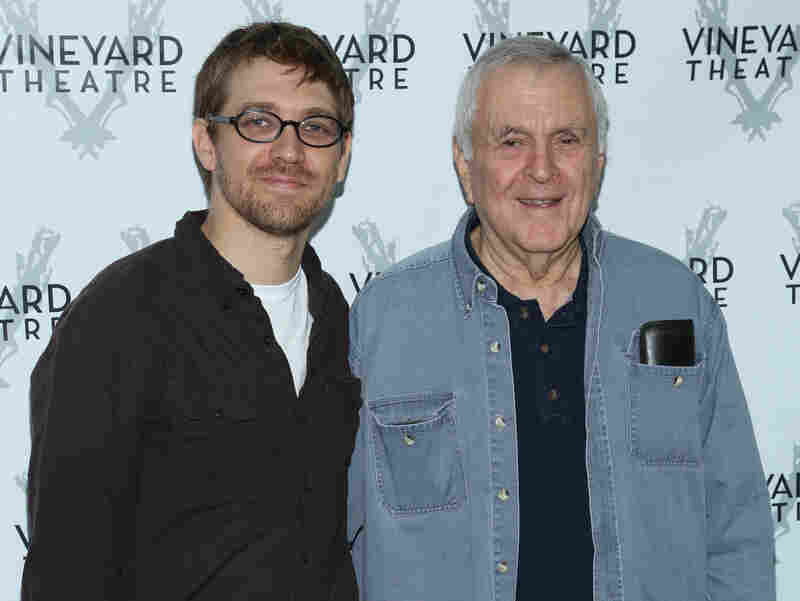 Greg Pierce and John Kander, on the carpet at a cast photo session for The Landing in September, are 51 years apart in age, but the two report working smoothly together. Rob Kim/Getty Images hide caption 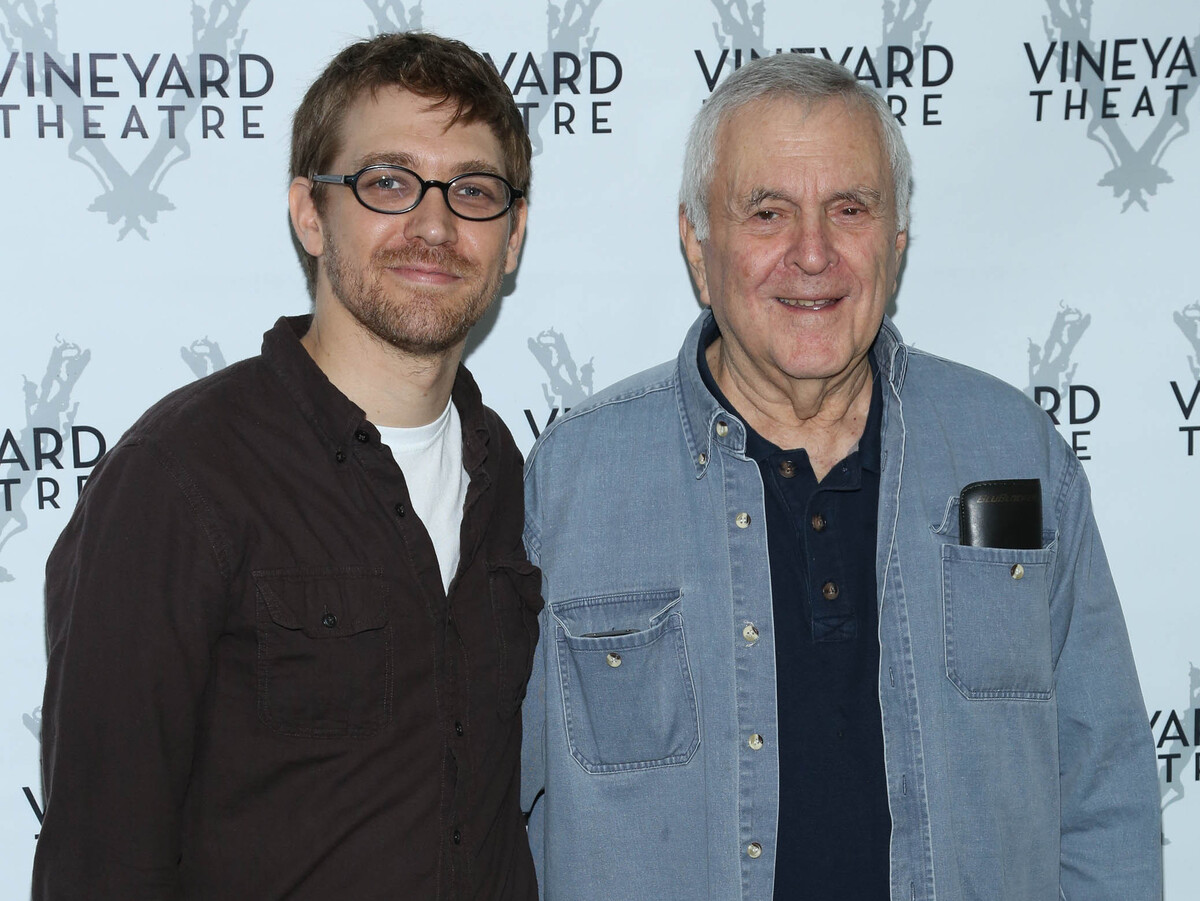 Greg Pierce and John Kander, on the carpet at a cast photo session for The Landing in September, are 51 years apart in age, but the two report working smoothly together.

"Working together as we do has made me write in a different way," he says. "And it's been a great adventure."

The Landing is an evening of three small musicals that play like short stories. Each one has a narrator, and each ends with a surprising plot twist.

In the first story, a bright but lonely boy befriends a carpenter and learns about the constellations and the mythology behind them, as well as some painful life lessons. In the second, a woman who loves gangster movies buys a brick from the St. Valentine's Day Massacre and it comes to life, with comic and crazy consequences. In the third, a gay couple adopts a boy who seems too good to be true — and it turns out he is.

"In these pieces," Pierce says, "someone wants something really badly, and they don't know what they're in for!"

Walter Bobbie, who directed the hit revival of Kander and Ebb's Chicago that's still running on Broadway, has staged The Landing, eliciting finely etched performances from the tiny cast of four, each playing multiple roles.

"The consequences to everybody's desires in each of these stories is remarkably different — and sometimes, both simultaneously sad and romantic," Bobbie says. "There's kind of a lyric quality to these pieces that I found beautiful."

A Whole New Kind of Collaboration

Bobbie says he was also drawn to the new writing partnership.

"It is immediately a different collaboration," he says. "It is not 'Kander and Ebb Lite' — it's Kander and Pierce, completely. And that caught my ear and attention. You know, the show very often doesn't have songs, and yet the music continues. And all of a sudden, someone will sing the next line of dialogue, and then they'll go back to talking. It's just so surprising."

Regardless of what the critics say after The Landing opens at the Vineyard Theatre Wednesday, Kander has two more projects he's working on with Pierce. He's counting on them to help keep him busy and in the present.

"As far as I'm concerned, without dwelling on my age — every once in a while I think to myself, I'd better hurry up!" he says.