Accessibility links
15 Years Of Wrangling Over Yellowstone Snowmobiles Ends The federal government finally has a plan for winters at Yellowstone National Park that both fans and foes of snowmobiles say they can live with. Within two years, only the cleanest and quietest of the vehicles will be allowed inside the park. 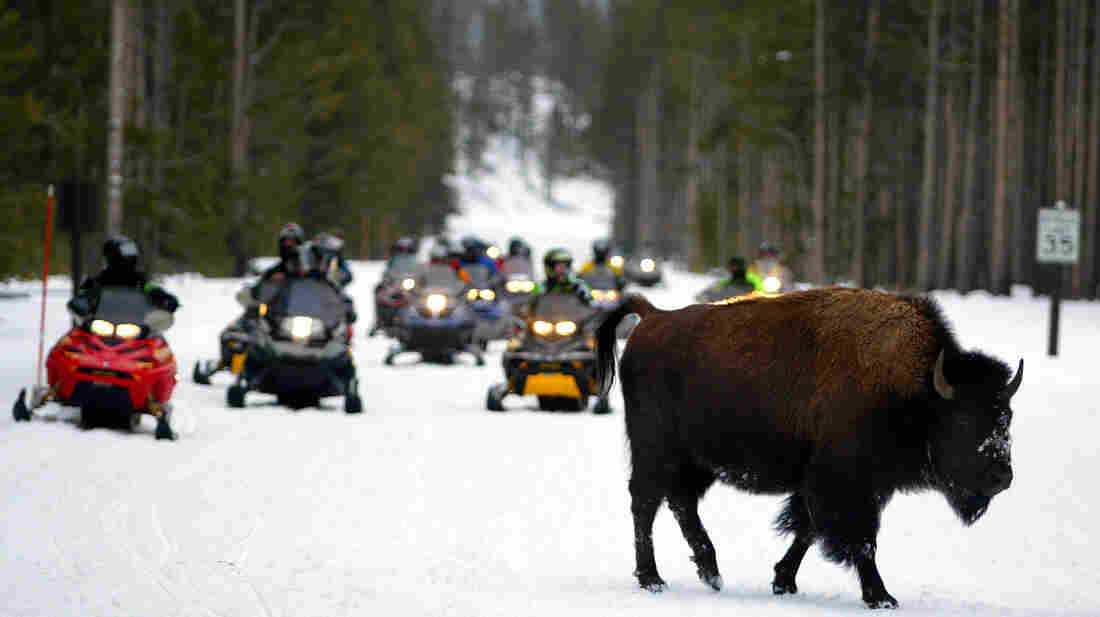 A bison crosses a road ahead of a herd of snowmobilers in Yellowstone National Park in 2003. New federal rules announced Tuesday will further restrict the noise and exhaust such vehicles are allowed to emit inside the park. Craig Moore/AP hide caption

The U.S. government Tuesday announced new rules for snowmobiles in Yellowstone that should make the country's oldest national park cleaner and quieter.

The rules were 15 years in the making because of intense wrangling between snowmobile operators and environmentalists. But both groups support the plan and give credit to snowmobile makers for designing cleaner machines.

Under the new plan, fewer than 51 groups of snowmobiles — each with up to 10 vehicles — will be allowed into the park per day, beginning in December 2014. The rule also sets new limits on snow coaches, larger vehicles that bring tourists into Yellowstone. 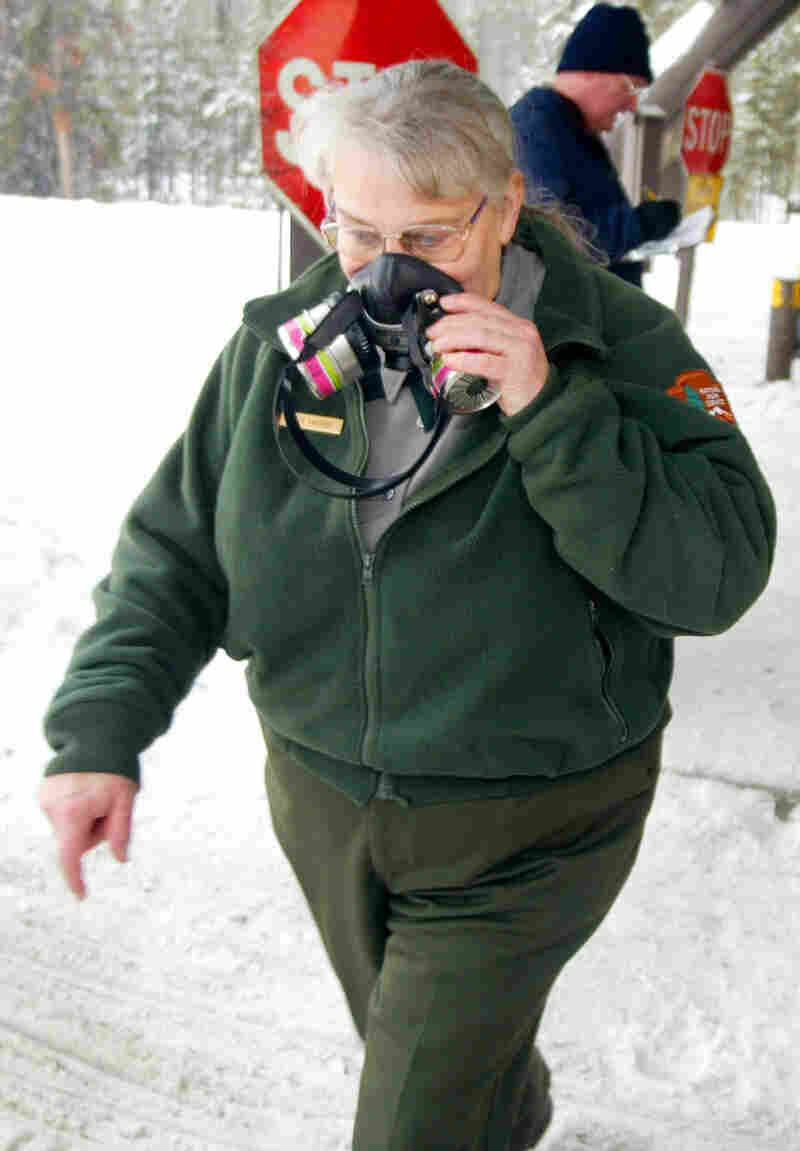 Snowmobile exhaust has been so bad that respirators like this one worn by park worker Kitty Eneboe in 2003 have been needed for protection. Craig Moore/AP hide caption

And as of December 2015, snowmobiles will have to pass stringent tests for noise and air pollution before they'll be admitted inside the park. Experts say few existing snowmobiles can pass these tests.

"This is the most reasonable, the most balanced plan that has ever been presented," says Clyde Seely, a snowmobile operator in West Yellowstone.

Tim Stevens, northern Rockies regional director for the National Parks Conservation Association, says he believes the plan will allow visitors to see the wonders of Yellowstone without being harassed by noise and pollution.

"Absolutely, under this plan Yellowstone will be a cleaner and quieter place," Stevens says, "and a place [where] park visitors can find the solitude that is unique to Yellowstone."

Four decades ago, snowmobiles helped open up the winter wonderland of Yellowstone to tourists. Visitors were dazzled by views of geysers spouting from the white wilderness, trumpeter swans gliding over rivers steaming with geothermal waters, and bison digging through snow to find grass.

"It was unbelievable to take those people in and see their mouths drop as they came across some of the phenomena that are there in the winter," says Seely, who guided some of the early tours. "It is a beautiful experience."

Snowmobiles were never allowed off-road in the park, but by the 1990s there were so many exhaust-pumping, whining machines darting about that even operators conceded there was a problem. As many as 80,000 snowmobiles zoomed through Yellowstone each season.

Visitors who came to listen to the gurgling of Old Faithful and other geysers instead were irritated by the loud buzz of the two-stroke engines.

Environmentalists raised concerns about the noise and the air pollution.

"There was a blue haze of exhaust at the entrance stations, while big lines of snowmobiles waited to get into the park," recalls Stevens. It eventually got so bad, he says, that "park rangers were having to wear respirators."

Stevens knew a resolution would not be easy. Though noisy and dirty, snowmobiles were gaining in popularity. Plus, hotels and other businesses near the park's four entrance gates depended on snowmobile tours to attract customers in the winter months.

He recalls telling a joke to a group of environmentalists that his then-newborn son would very likely get his driver's license before the government could come up with a resolution that would stick.

"And now he's a freshman in college," Stevens says.

From The Archives: The Snowmobile Debate

Through the years, the National Park Service came up with seven different plans for snowmobiles in Yellowstone. Snowmobile enthusiasts and environmentalists challenged one after another in court.

Seely says his bleakest moment in this long struggle was about 10 years ago: The night before the winter season was supposed to start, a federal judge decided not to allow snowmobiles into the park. "Talk about a bomb," he recalls.

Environmentalists had their low moments too, such as when the Bush administration authorized 950 snowmobiles per day in Yellowstone.

This long saga makes it all the more remarkable that nearly everyone seems content with the latest plan from the National Park Service.

Seely, for example, says he'll have to buy new snowmobiles to ensure that his Yellowstone tours meet the new requirements. But even that, he says, is OK with him. The rule provides incentives for snowmobile makers to develop cleaner vehicles. If they do, the park service may increase the number of snowmobiles allowed into Yellowstone.