Accessibility links
Government Takes A U-Turn On Warrantless Wiretaps The Obama administration has discovered that it unintentionally misled the Supreme Court last year. The solicitor general told the court that the government always informs terrorism defendants when evidence against them is acquired with a warrantless wiretap — but federal prosecutors, in fact, had not been doing that. 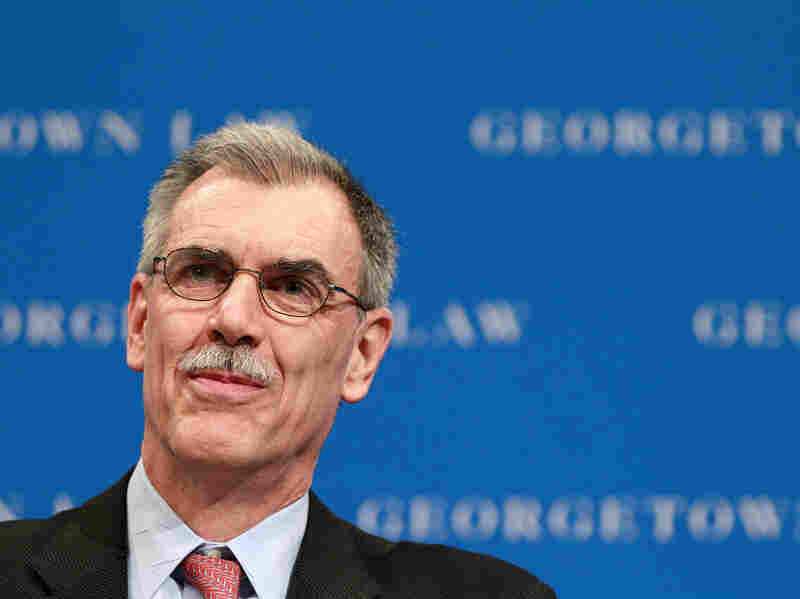 Solicitor General Donald Verrilli made a case before the Supreme Court last October based on information that he has discovered to be incorrect. Haraz N. Ghanbari/AP hide caption 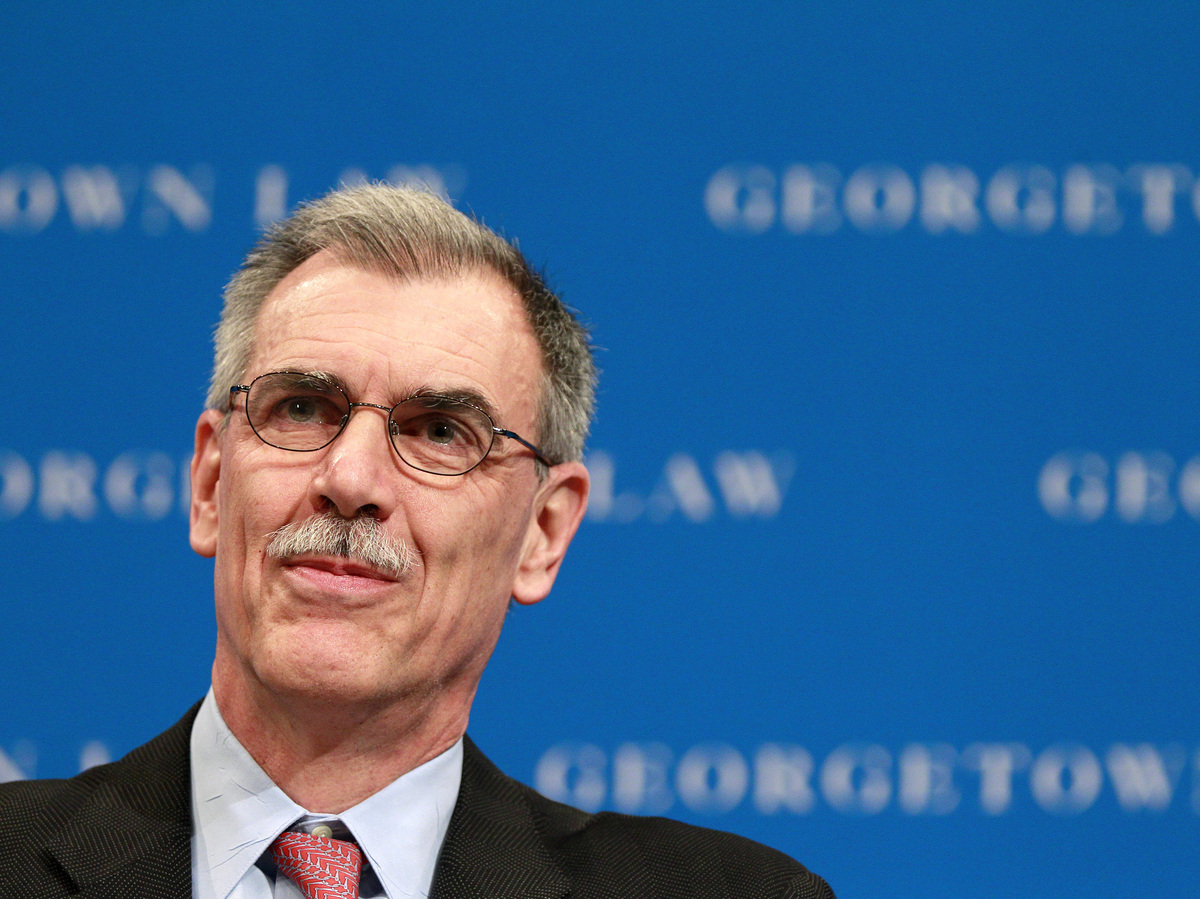 Solicitor General Donald Verrilli made a case before the Supreme Court last October based on information that he has discovered to be incorrect.

The Obama administration recently discovered that it unintentionally misled the Supreme Court last year in a warrantless wiretapping case involving U.S. citizens. Now, the Department of Justice is changing its policy to comply with the law and assurances it gave the high court.

The key figure in this saga is Solicitor General Donald Verrilli, the government's chief advocate before the Supreme Court. Late last October, he argued before the court that human rights groups had no legal standing to challenge parts of the Foreign Intelligence Surveillance Act, commonly known as FISA.

FISA, as amended in 2008, allows the government to conduct electronic surveillance of individuals abroad, without a warrant, even though the surveillance may incidentally capture the voices and messages of U.S. citizens.

The human rights groups in that case contended that the law was unconstitutional because their communications with their clients were almost certainly being picked up without a warrant.

When the case reached the Supreme Court, Solicitor General Verrilli argued that the groups did not have legal standing to challenge the law because they could not prove that they were spied upon. Rather, he said that their claim amounted merely to a fear of spying.

Several justices pressed Verrilli in court, asking who then — if anyone — would have standing to challenge the law. Verrilli told the court that "an aggrieved person, someone who is a party to a communication" would receive notice if the government planned to introduce information derived from that communication at trial, and would then have standing to challenge the law.

In dismissing the human rights organizations' case, the Supreme Court reiterated its understanding that there were others who would have standing to challenge the law.

But in June, Verrilli read a New York Times article reporting that in two terrorism cases, federal prosecutors had refused to disclose whether the defendants had ever been overheard on warrantless wiretaps.

The usually soft-spoken solicitor general was furious, according to Justice Department sources.

His ire was particularly focused on a number of national security lawyers who had been present for his practice sessions prior to the Supreme Court arguments on FISA last year. Those lawyers knew that prosecutors were routinely not making disclosures, but did not bother to tell Verrilli.

Verrilli is not the first solicitor general to be burned by his own side. During the presidency of George W. Bush, Solicitor General Paul Clement assured the Supreme Court in 2004 that the U.S. did not engage in torture. The infamous Abu Ghraib photographs were published later that same day. Clement remains angry about being blindsided.

This time, however, the outcome of the internal debate that took place is somewhat different. Verrilli set out personally to change the administration's policy.

To understand this complex issue, consider a fictitious, but likely, example: Bob Smith in the U.S. exchanges several emails with a known terrorist in Pakistan. The emails don't contain anything obviously incriminating. But intelligence officials decide that Bob deserves a closer look, and they soon discover grounds for worry.

Based on that discovery, they obtain a warrant. By listening in on his communications, they collect evidence and charge him with plotting to blow up a bridge in New York.

The legal question then is: Does the U.S. government have to tell Bob's lawyers that the government initially got on to him from a warrantless wiretap?

Until recently, Justice Department prosecutors had claimed they did not have to tell defense lawyers about the warrantless surveillance, so long as that information was not used directly at trial.

That is where Verrilli disagreed. His reading of FISA was that it had a different requirement: When evidence has been "derived from" warrantless electronic surveillance, the government "shall disclose" that fact to the defendant.

Armed with that knowledge, the defendant can file a motion in court to suppress all of the information subsequently gathered, on the grounds that it traces back to the original, warrantless surveillance.

Verrilli, according to sources, believes that most, if not all, defendants could not successfully make that case. Rather, the government could justify independently the way it independently compiled evidence for the trial.

But the solicitor general also believed that the law required that the defendants be informed if any of their communications were picked up without a warrant.

National security prosecutors initially had a fit. They said that if defendants were to be told about warrantless surveillance, the intelligence agencies might stop helping the Justice Department make criminal cases.

Eventually, lawyers for the Justice Department and the intelligence agencies met for a sitdown. Sources say a consensus was reached that Verrilli was correct — the law does require informing criminal defendants. If that ends up causing problems, the group agreed, it will be up to Congress to change the law.

Legal experts from the George W. Bush administration concur. Steven Bradbury headed the Office of Legal Counsel, advising the president on the meaning of the law. According to Bradbury, "Congress specifically contemplated that the fruits of this broad, foreign-targeted surveillance program would be useful in criminal prosecutions."

Critics of the surveillance program are not satisfied by the government's recent U-turn. Jameel Jaffer, deputy legal director of the American Civil Liberties Union, argued on the other side of last October's FISA case. He says that Verrilli "has an institutional obligation to correct the record" and should inform the Supreme Court of his mistake.

It is not clear whether Verrilli plans to do anything of that sort.

But sometime in the next few weeks, the Justice Department is expected to inform an accused terrorist now in custody that his communications were first picked up through warrantless surveillance.

And that could send the whole issue back to the Supreme Court.