Accessibility links
'Insurgent' Wing Grapples For Control Of The GOP New York Times national political correspondent Jonathan Martin explains the Republican rift that was widened by the recent budget battles. He talks about how the divisions may play out in upcoming elections and traces the history of the battle between establishment Republicans and the "insurgent" conservatives. 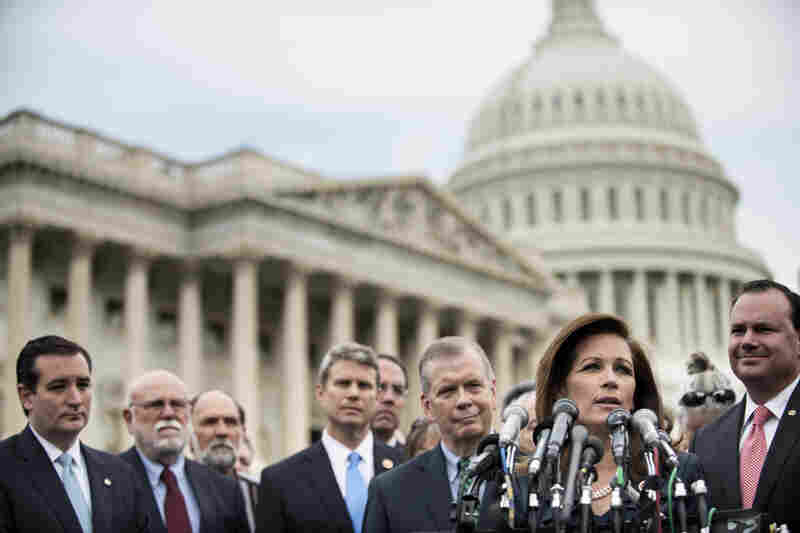 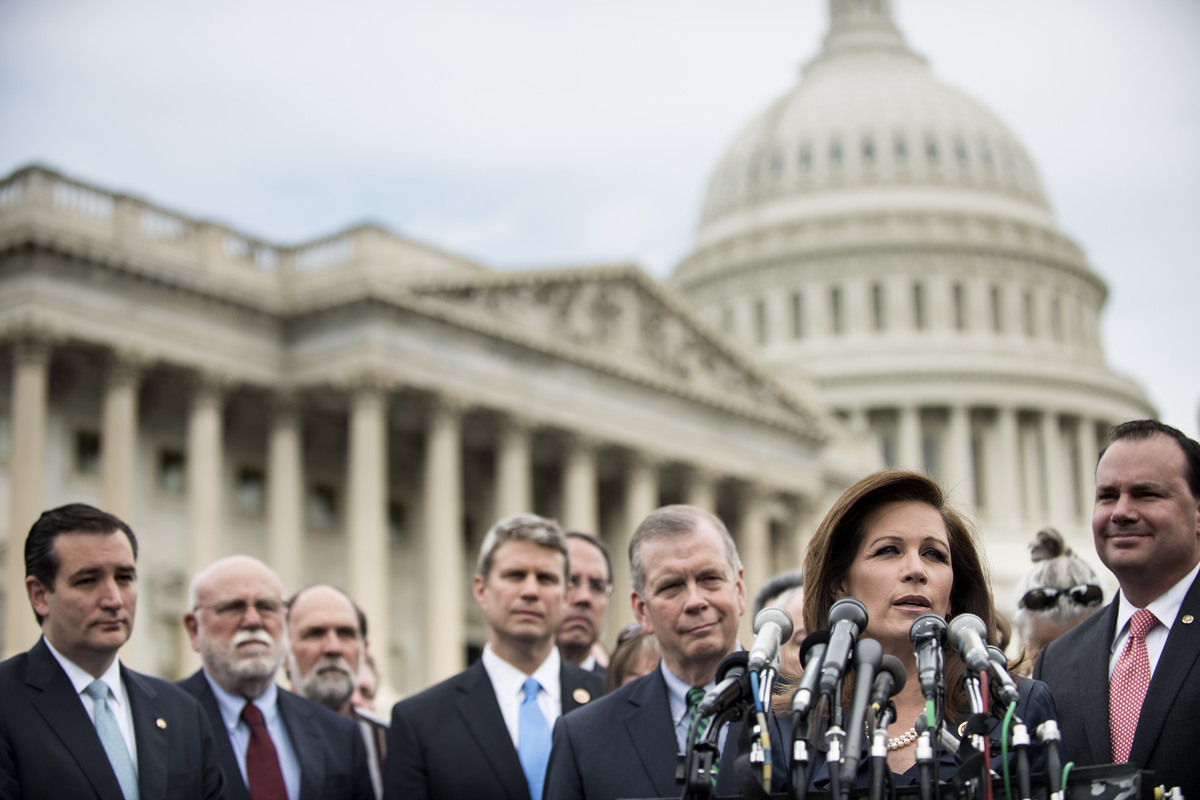 Tea Party and conservative leaders including Sen. Ted Cruz, Rep. Michele Bachmann and Sen. Mike Lee gather for a press conference on Capitol Hill in May.

There's a battle for control of the GOP between establishment Republicans and a new brand of conservatives.

"You can call them populist, you can call them insurgents, you can them Tea Party adherents. ... I think the general term I try to use is the 'insurgent' wing," says New York Times national political correspondent Jonathan Martin.

The division between the establishment and the "insurgents" was widened by the recent budget battle and the subsequent recriminations over who was to blame for the GOP's loss. And the rift is likely to play out in the 2014 congressional elections and 2016 presidential primaries.

Martin, a former reporter for Politico, co-wrote the New York Times story Fiscal Crisis Sounds The Charge In GOP's 'Civil War.' He talks with Fresh Air's Terry Gross about the party divisions and the groups supporting each side, including the Club for Growth, the Chamber of Commerce, American Crossroads and the Senate Conservatives Fund.

On the influence Karl Rove and President George W. Bush had on the current GOP

There's no question that Rove and President Bush brought more conservatives, more evangelicals, more ideologically driven folks on the right to the polls in '04 and that's why they won. But you also have to look at how they fared with other groups: Hispanics come to mind, moderates, women. George W. Bush fared much better with those groups in '04 than his successors did later.

I feel like the party is polling now with those groups [and] compared to what Bush had in '04, the party has gone downhill. My theory ... is that this Tea Party movement began because even though those groups ... supported President Bush in his two elections, they were disappointed. The expansion of Medicare, Medicare Part D, the prescription drug benefit, immigration reform and certainly the TARP bailout in the fall of '08 combined with some other issues I think led to a sense of disappointment with President Bush and more broadly with the party among a lot of conservative activists.

The states themselves are no longer islands that are driven by their own quirky traditions and their own culture — it's a much more homogeneous political culture. People, especially the political activists who participate in the primaries, they watch the same channels, they read the same publications online.

On how the Internet has made the country more politically uniform

You have to point to the power of technology and the rise of the Internet. It really has made the world more connected and changed the way politics happen. I think people now, regardless of where they are in the country, are much more tuned in to national politics and the day-to-day or week-to-week vicissitudes of national politics than they were in an earlier day. The way that I see that manifested is during the presidential primaries and caucuses; they're much more shaped by what's happening in national developments than they are [by] what's happening in states, even localities.

Take, for example, the last GOP primary. You had this series of Republicans who rose and fell in national polls and eventually, of course, Romney was the nominee, but you saw that reflected in the states. The states themselves are no longer islands that are driven by their own quirky traditions and their own culture — it's a much more homogeneous political culture. People, especially the political activists who participate in the primaries, they watch the same channels, they read the same publications online, and they're driven by similar factors if they're in Concord, N.H., or if they're in Waterloo, Iowa, and I think that, to me, is the biggest difference. The walls have come down. People now operate much more uniformly across the country in terms of their political actions.

The establishment wing of the party is certainly led by the two congressional leaders — John Boehner and Mitch McConnell — and then you have an operative and donor class; Karl Rove, certainly, the former Bush adviser is a very familiar name. ... A lot of donors, certainly on the coast, the so-called Acela Corridor who give big contributions to Republicans, they are pragmatic-minded, they want to win, they want congressional majorities and they want to win the White House. ...

The [insurgent] leaders include Jim DeMint, who is the former senator from South Carolina who now runs the Heritage Foundation; certainly in Congress Ted Cruz and Mike Lee, the two senators who have embraced the role as leaders of that wing; and then in the House you've got a few dozen, mostly junior members of the House who have become spokesmen for this insurgent wing, too.

On the influence of The Heritage Foundation and its "insurgent" arm, Heritage Action

GOP Establishment Grapples With A Tea Party That Won't Budge

Where Does The GOP Go From Here?

Where Does The GOP Go From Here?

Can The GOP Put Its Internal Feuds Behind It?

Can The GOP Put Its Internal Feuds Behind It?

For a long time ... Heritage was a think tank like a lot of Washington think tanks. They churned out white papers and came up with policy ideas — in fact, ironically, the notion of mandating Americans to buy health care actually came from the Heritage Foundation originally back in the '90s. Obviously times have changed since then. ...

The Heritage Foundation was somewhat musty, staid, like a lot of think tanks in Washington. What happened was they decided to be much more of an action-oriented think tank and even more of a lobby. They created this arm called Heritage Action that aggressively lobbies Capitol Hill, that scores votes, if you will, which is to sort of give lawmakers a letter grade for certain votes.

If you talk to any congressional Republican they will tell you nowadays, with conservatives, Heritage Action is the big kid on the block, that lawmakers see them out there and if they are on one side of an issue that will compel a lot of lawmakers on the right to walk that line. It's a real sea change in Washington. ... It is now, in Congress, I think for Republicans, the most powerful lobby. More than the Chamber of Commerce, more than the manufacturers.

On what Heritage Action is lobbying for

They're lobbying for a conservative line against an expanded role for the federal government. They don't like the Farm Bill because they don't like farm subsidies; they have problems with expansion of the welfare state in terms of food stamps; they didn't like the president's health care law; and they were advocates for this strategy, for linking funding the health care law to funding the government more broadly. They were one of the intellectual architects for this strategy, giving outside support for the likes of Sen. [Ted] Cruz and [Sen. Mike] Lee.