Accessibility links
Movie Review - 'The Square' - Egypt In Crisis, And Its People In Focus Documentarian Jehane Noujaim (Control Room) follows a group of young revolutionaries living and protesting in Egypt during the past two tumultuous years in that strife-torn country. 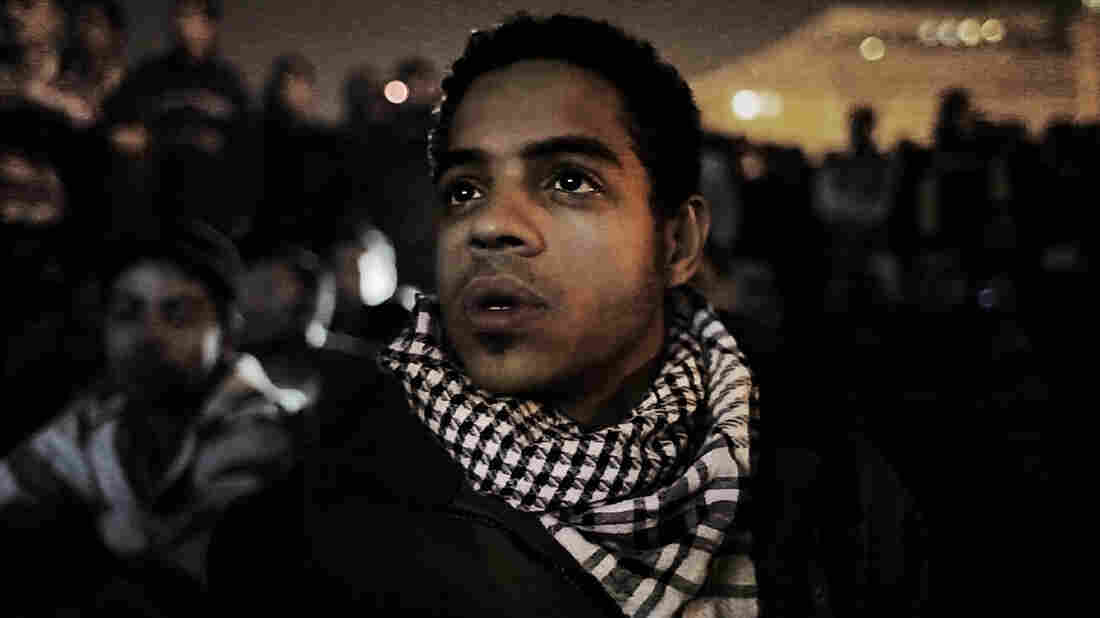 The documentary follows the political turmoil in Egypt since 2011 but focuses on the story of just a handful of young revolutionaries, among them Ahmed Hassan. Noujaim Films hide caption 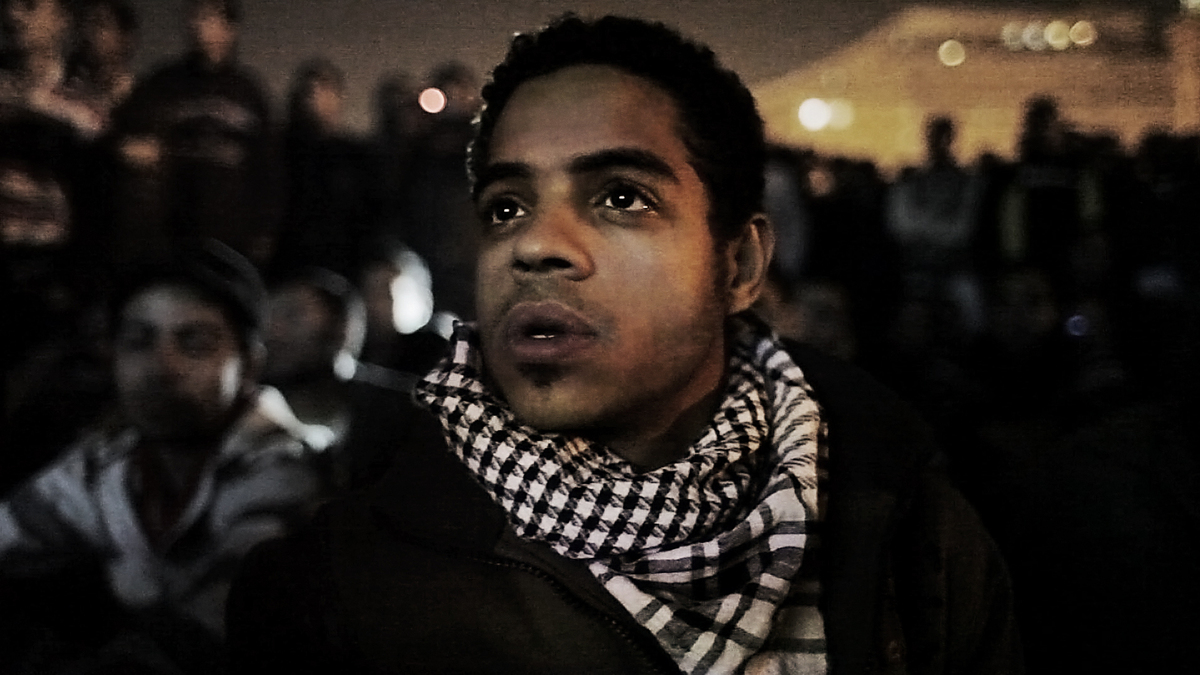 The documentary follows the political turmoil in Egypt since 2011 but focuses on the story of just a handful of young revolutionaries, among them Ahmed Hassan.

Not rated; bloody violence and its effects

In Arabic and English

Several times during The Square, Jehane Noujaim's account of Egypt's unfinished revolution, the camera gazes down on Tahrir Square, teeming with multitudes. Yet ultimately, one of the principal appeals of the D.C.-born Egyptian-American filmmaker's documentary is its intimacy.

While capturing the giddiness of national transition from the winter of 2011 to the summer of 2013, Noujaim focuses on just three people: Ahmed Hassan and Khalid Abdalla, both secular and liberal, and Magdy Ashour, a bushy-bearded Muslim Brotherhood member. All opposed Hosni Mubarak, president when the story opens, and then split because Ashour supported his successor, Mohammed Morsi.

These three are not exactly average Egyptian men in the street. They're committed, informed, articulate; Abdalla is an Oxford-educated actor who appeared in The Kite Runner and The Green Zone. They serve as both participants in and commentators on events that range from moments of communal exultation to bloody massacres observed from mere inches away.

Noujaim's previous movies include Startup.com and The Control Room, not particularly dangerous undertakings. But she repeatedly put herself at risk while making The Square, even spending several days as an unacknowledged prisoner of the Egyptian government before she was accidentally discovered by a lawyer who managed to get her freed.

That incident isn't chronicled by the documentary, in which Noujaim doesn't appear. Still, the director's daring is evident in the many sequences filmed by running and ducking camera operators and is echoed by the film's principal on-screen figures. Asked by an American TV reporter if he worries that his fame might lead the government to target him, Abdalla replies, "I don't care."

Later, protest singer Ramy Essam shows the marks on his back from a beating he received in police custody — although it's unclear whether he was treated more harshly, or less, for his prominence. 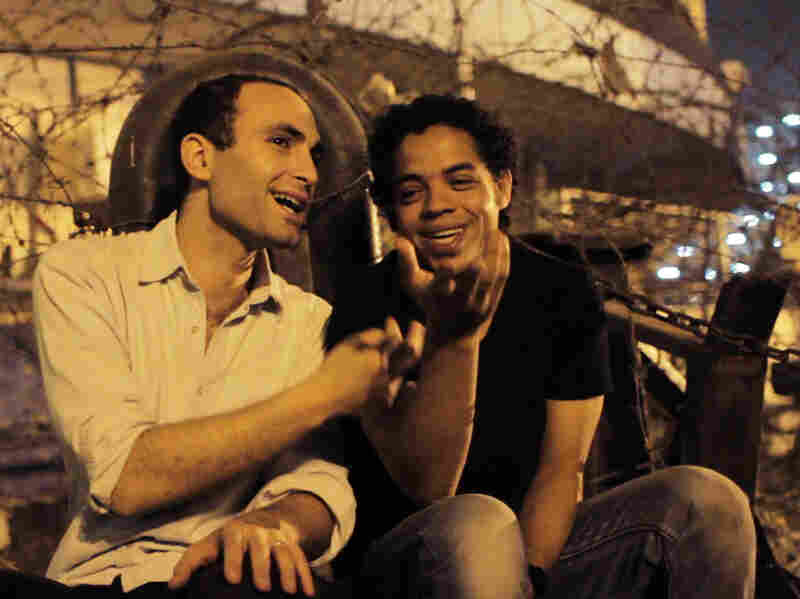 Before protesting in The Square, Khalid Abdalla (left) acted in such films as The Kite Runner, Green Zone and United 93. Noujaim Films hide caption 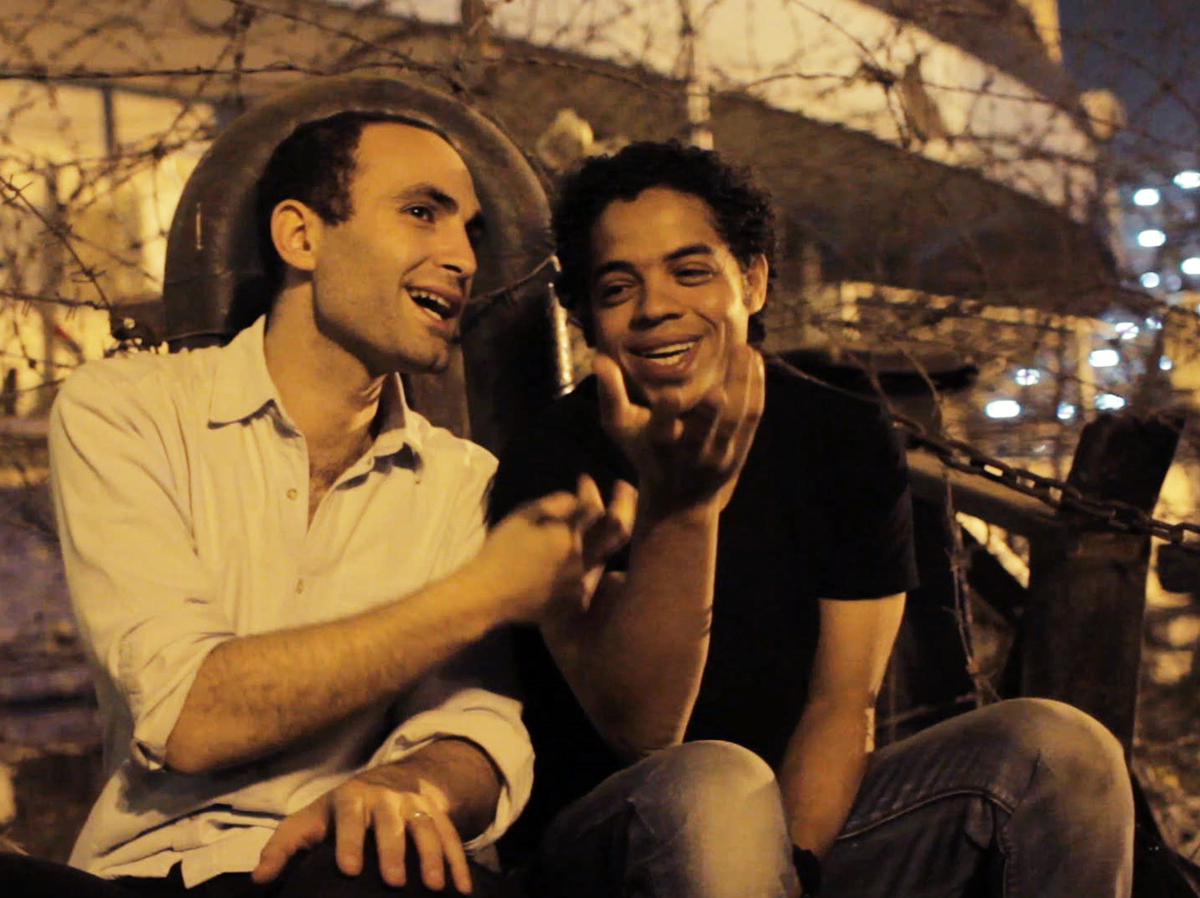 Before protesting in The Square, Khalid Abdalla (left) acted in such films as The Kite Runner, Green Zone and United 93.

Female protesters, notably journalist Aida El Kashef, sometimes feature in the action. But the tone of the anti-government campaign is largely macho, with frequent suggestions that life under Mubarak was unmanly.

"Egypt was living without dignity," protests Hassan, a chain-smoking rebel who could be Sal Mineo to Abdalla's James Dean.

The Square is a tale of friendship, as Hassan vows his love for Ashour even as their politics diverge. It's also a debate on tactics and goals.

The director interviews a few government and military spokesmen, who clearly don't see the clash as one of ideas. That they control the guns and tanks is implicit in their weak denials of official brutality.

There are visual motifs — Noujaim likes close-ups of sign-painting — and a journalistic framework. While inevitably impressionistic, the movie does proceed chronologically. Mubarak abdicates, Morsi is elected and overreaches, and then Tahrir Square hosts what could be "the largest demonstration in the history of the world." Finally, the army takes control, a conclusion that is neither narratively nor historically satisfying.

The director recut the movie several times as events overtook it. She may yet do so again — although if more major changes occur, they could merit beginning another documentary. As The Square makes clear, Noujaim would not hesitate to rush back into the fray.