Accessibility links
For 'Blue,' The Palme d'Or Was Only The Beginning Blue Is the Warmest Color won the top prize at the Cannes Film Festival this year. Now the French drama is arriving in U.S. theaters amid controversy over its explicit sex scenes — and public difficulties between the director and his stars. 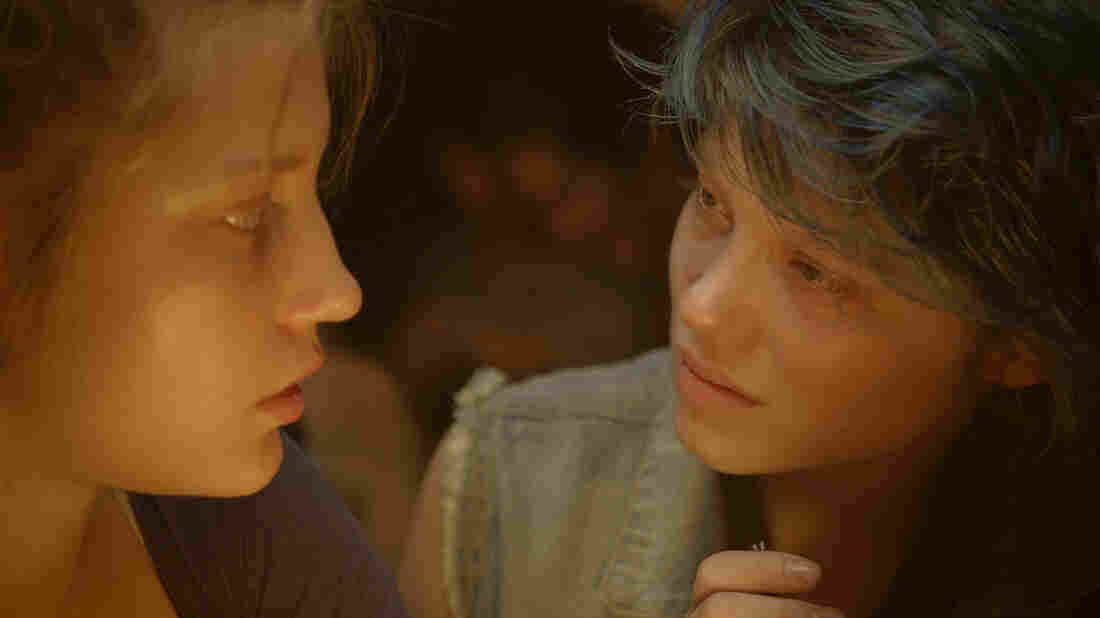 Blue Is the Warmest Color focuses on the relationship that develops between Adele (Adele Exarchopoulos, left) and Emma (Lea Seydoux), and it includes two explicit sex scene that have raised hackles among some critics. IFC Films/Sundance Selects/Wild Bunch hide caption 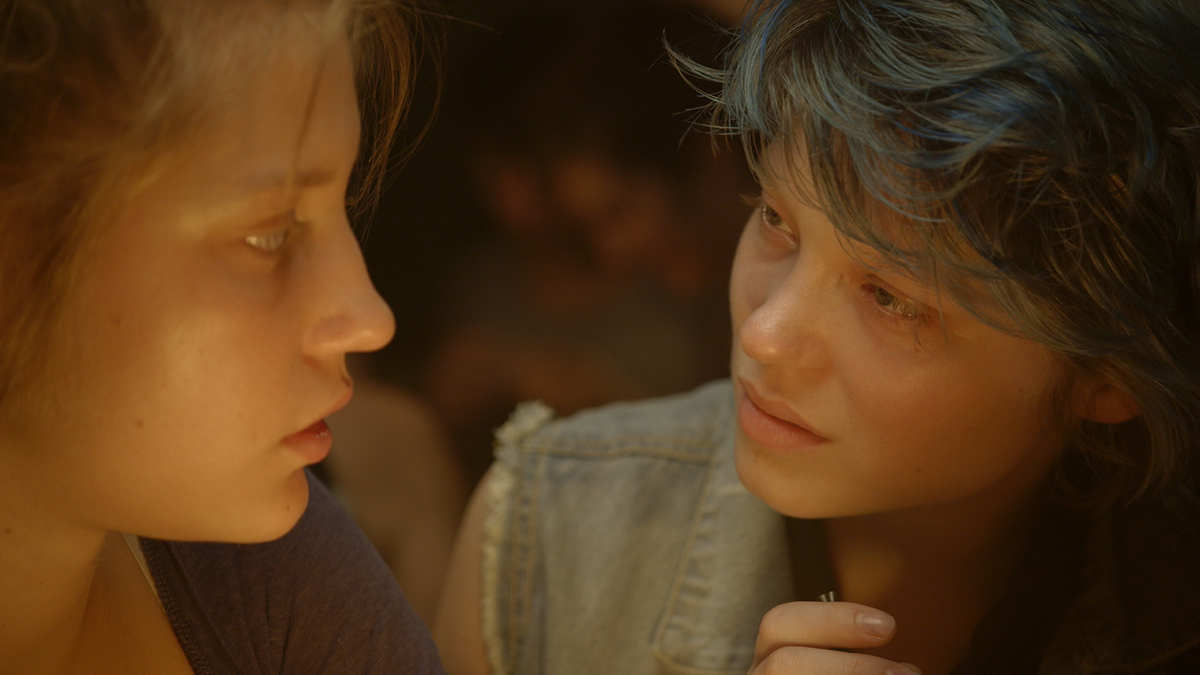 Blue Is the Warmest Color focuses on the relationship that develops between Adele (Adele Exarchopoulos, left) and Emma (Lea Seydoux), and it includes two explicit sex scene that have raised hackles among some critics.

The French film Blue Is the Warmest Color has been making news for months.

It won the top prize at the Cannes Film Festival in May. Then the director and his stars got into a public feud about the conditions on set and the explicit sex scenes between the film's leading actresses. After months of controversy, the picture finally opens in American cinemas this week — with an NC-17 rating.

But before it became the cinematic flashpoint of the year, Blue Is the Warmest Color was also declared the love story of the year.

A Maddening Kind of Filmmaking

For the first time in its history, the Cannes Film Festival jury, led by Steven Spielberg, awarded its top prize to three artists for one film. The Palme d'Or went to filmmaker Abdellatif Kechiche and the actresses Lea Seydoux and Adele Exarchopoulos — recognition of just how far the actresses had to go to bring their love story to the screen.

Take the opening scene: High school student Adele is crossing the street when she sees the blue-haired Emma, her arm wrapped proudly around her then-girlfriend. The two walk past each other, only to pause seconds later to turn around.

"We see it in the film, it lasts 20 seconds," says Seydoux, who played Emma. "And we spent one day, and we did almost a hundred takes for that. And we had to cross the street a hundred times."

Kechiche is known for this maddeningly demanding kind of filmmaking, shooting take after take to capture a perfectly rendered moment. His own take on that scene:

"It arrives at a very, very precise moment," he says. "Life can be transformed in a second. Love at first sight while crossing the street. If it hadn't happened, if Adele had arrived one minute earlier or one minute later ...

"Is it chance, is it destiny? These are the questions it needs a whole film to respond to."

And his camera takes its time. It seems to float over his characters like a documentarian's eye, lingering on quiet glances, hovering on Emma's face while Adele speaks, on Adele's mouth as she listens.

That's why critics love Abdellatif's work, and why Seydoux says she wanted to work with him.

"And yeah, I knew his technique, but it's true, it was very, very difficult," she says. "But I'm not complaining, you know. I don't mind to suffer. It was just that on this film it was a very special experience. 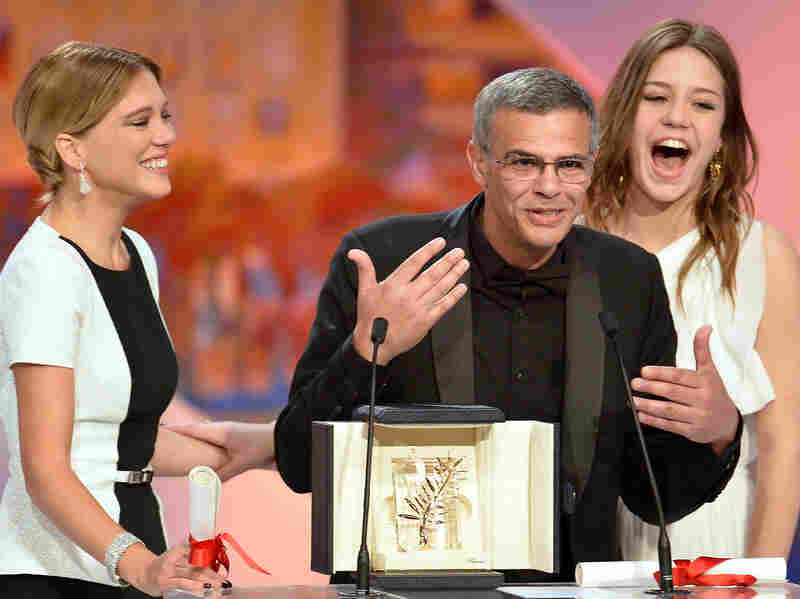 Abdellatif Kechiche speaks onstage at the Cannes Film Festival in May with Seydoux (left) and Exarchopoulos after all three were awarded the Palme d'Or for their work on Blue Is the Warmest Color, a festival first. Alberto Pizzoli/AFP/Getty Images hide caption 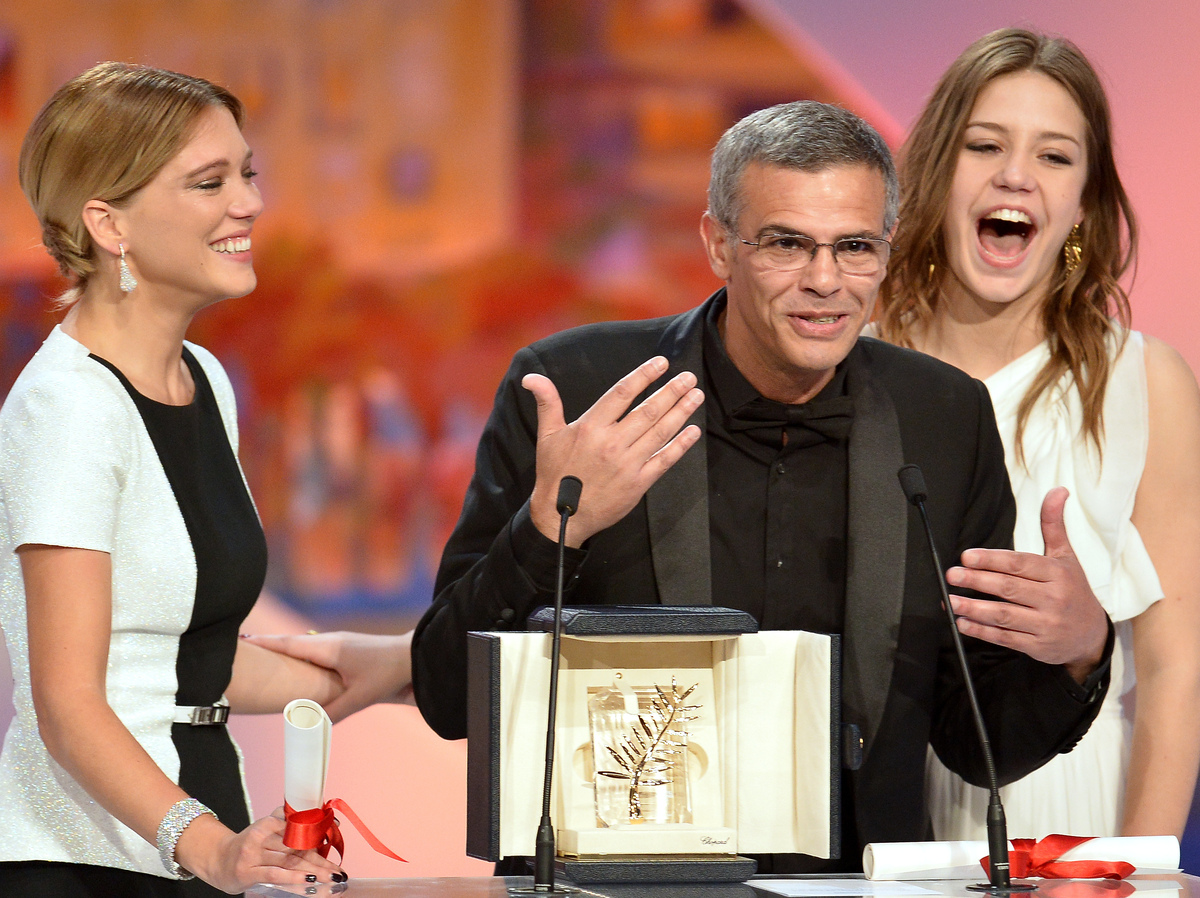 Abdellatif Kechiche speaks onstage at the Cannes Film Festival in May with Seydoux (left) and Exarchopoulos after all three were awarded the Palme d'Or for their work on Blue Is the Warmest Color, a festival first.

Film critic B. Ruby Rich writes about the portrayal of women and sexuality on-screen, and she says American critics need to get over their obsession with explicit sex.

"Directors are famously sadistic toward their actresses," she says. "And you know, film is a medium which expertly hides its own process. You never know what went on on a film set unless someone chooses to talk, and they usually don't. These actresses are young. I think they're very naive. I think they didn't realize what sex means outside France, for instance."

For their part, the actresses have been saying that everything about making the film was difficult — not just the sex scenes.

"It wasn't [harder] to shoot the sex scenes than the scenes that were violent, or even just natural scenes," says the 19-year old Exarchopoulos, who plays Adele. "For example, when you're talking on the telephone and no one is on the other [end]. We laughed a lot when we were making the film. It was a lot of fun to make the film, and we took a lot of pleasure in it."

And that's what distinguishes art from pornography for Kechiche.

And even if the film's controversial scenes do amount to pornography to some, they last 10 minutes in a film that spans three hours.

Rich says for her, Blue Is the Warmest Color is not a film about sex. It's a film about a relationship that sparks across a societal divide.

"He [Kechiche] presents for the character of Adele a wonderfully multicultural France," she says. "A France where young people in high school of all different races and backgrounds are mixing together and partying — and the world of the older woman, Emma, played by Lea Seydoux, is a much more rarefied world, it's a more upper-class world. ... It's a world of French intellectuals, and those worlds ultimately don't mesh all that well."

For the Tunisian-born Kechiche, film is a way to explore the confrontation between rich and poor — between insiders and outsiders — in France today.

"The confrontation between these two worlds, and the possibility of understanding and acceptance of one into the other fascinates me," he says. "I ask myself this question very often and explore it through my films.

"Can one really get out of one's own social origins, if you're like Adele? And can she be understood by Emma's world? It's a very important question for me. I almost want to say I'm obsessed with this question and have been for a long time."

You don't have to be French, or falling for someone of the same sex, to connect to that question, says Rich — to ask whether first love can ever overcome the harsh realities of becoming an adult.

"Certainly this film took me back to all the great passions of my life," she says. "You know the kind of sensation you're supposed to have when you're dying? That's how I felt about the different people I'd been with. ... That time in my life just came back. ... If people can be open to it, [this film] really can be a time machine, taking people back to some of the most vivid, passionate experiences in their life."