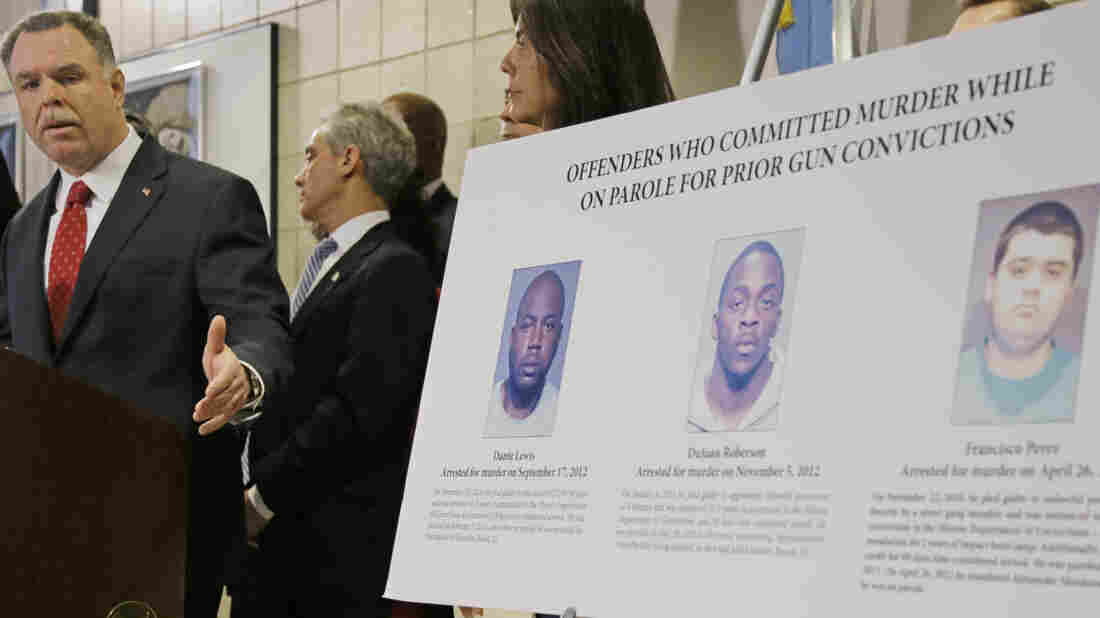 Chicago Police Superintendent Garry McCarthy says police have at least 108 examples of shootings or murders in 2013 alone that would not have happened if the proposed mandatory minimum sentencing law was in effect. M. Spencer Green/AP hide caption 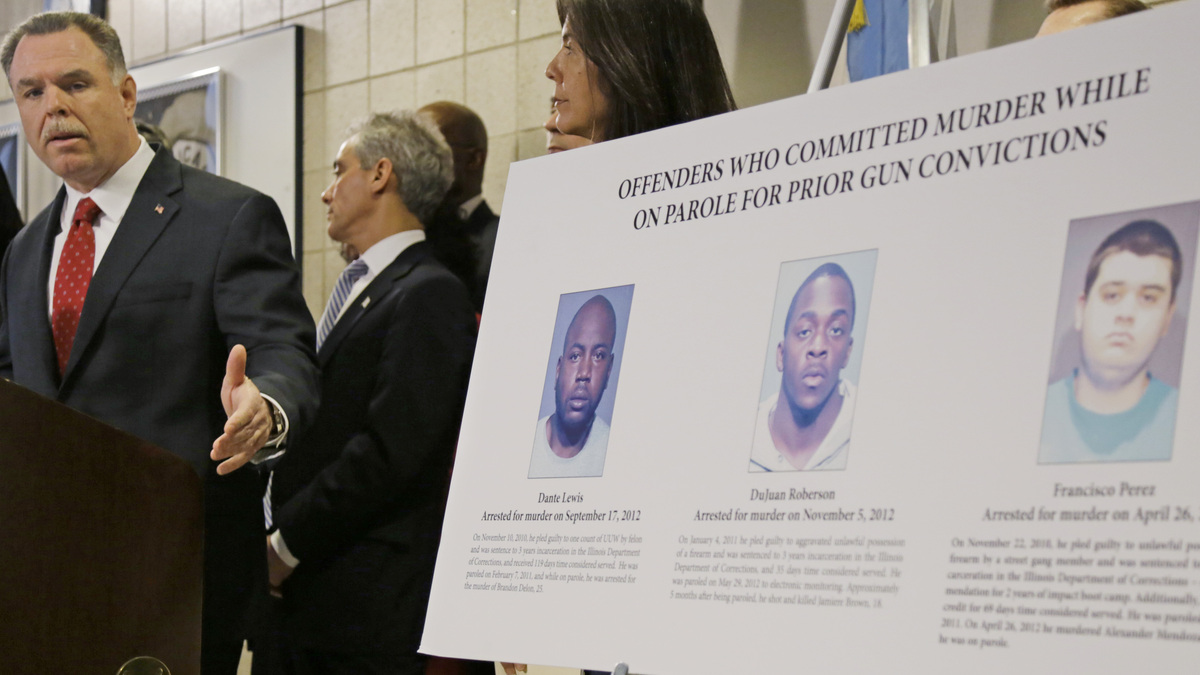 Chicago Police Superintendent Garry McCarthy says police have at least 108 examples of shootings or murders in 2013 alone that would not have happened if the proposed mandatory minimum sentencing law was in effect.

In Illinois, you can face a prison term of one to three years if you use a weapon unlawfully. But you might serve only half that time, or you could get probation or even boot camp.

Chicago alone saw more than 500 murders last year, most by gunfire. Mayor Rahm Emanuel says the current law is not what's needed to fight gun violence in the city.

"In fact, I would like to ... note that the same minimum penalty we have for a gun law is what we have for shoplifting," Emanuel has said.

A bill backed by the mayor would raise the sentence for unlawful use of a firearm to a three-year mandatory minimum, and require anyone found guilty to serve 85 percent of that time. It's a proposal that Cleopatra Pendleton supports.

"In my community, carrying an illegal gun is not a big deal, but it needs to be a big deal," Pendleton says.

The death of her 15-year-old daughter, Hadiya, made national headlines when she was killed in a park not far from President Obama's Chicago home shortly after her high school band performed in inaugural festivities. Pendleton says when she learned the man charged with her daughter's murder had served time for another gun crime, it felt like salt being poured in a wound.

"I wonder if a larger, mandatory minimum had been in place, if the person who allegedly shot and killed my daughter would have been in jail and Hadiya would still be alive," she says.

Chicago Police Superintendent Garry McCarthy says there are at least 108 examples of shootings or murders in 2013 alone that would not have occurred if this bill was already in law.

The University of Chicago Crime Lab analyzed the bill. It says people on parole arrested for illegally carrying a firearm are four times more likely than other convicted felons on parole to be arrested for murder, and nine times more likely for a nonlethal shooting. The Crime Lab also says a growing body of research suggests the threat of swift sanctions can deter crime and therefore could hold true for gun violence.

Not everyone buys that analysis. John Maki, the head of the nonpartisan John Howard Association, a prison watchdog group, says it is the same old story.

"This is how the United States has gone from a prison population of around 250,000 people in the early 1970s to about 2.3 million right now," Maki says. "It's always on the back of these really horrible tragedies."

Maki says he thinks people and legislators feel that they have to do something, so prison is held out as some magical solution to the problem.

The Illinois Department of Corrections also has a warning. It says the cost of the proposal would be $1 billion over 10 years, with nearly 4,000 inmates added to a prison system already bursting at the seams. But the University of Chicago crime lab says the deterrent effect of the sentencing proposal could actually mean substantially less cost with fewer people going to prison.

Daniel Nagin, a criminologist at Carnegie Mellon University, thinks otherwise. He says people often engaged in gun crimes are not thinking about the length of a prison sentence as they act in the heat of the moment. The real deterrent, he says, is the certainty of getting caught, which has a lot to do with a much more tangible and visible police presence.

"Nothing can be done to bring back the people who have died because of gun violence," Nagin says. "What needs to be done is to look to the future to try to identify the most effective and proven strategies which might reduce their numbers. It's clear that the evidence suggest there are alternatives that are better [and] that will be more effective in that regard than mandatory minimums."

As sponsors of the legislation push for a vote, negotiations with gun rights advocates like the NRA continue. They argue that under the proposed legislation, law-abiding citizens who make one mistake could face prison time.