Accessibility links
Feds Recast Child Prostitutes As Victims, Not Criminals For years, many police departments have dealt with child prostitutes by putting them in juvenile detention centers. But federal agencies say that minors are often sex trafficking victims in need of help — and who can, in turn, help put their pimps in jail.

Across the country, newly formed task forces made up of local, state and federal law enforcement officers are starting to view what was once seen as run-of-the-mill prostitution as possible instances of sex trafficking.

With support and funding from the FBI and the Justice Department, agencies are starting to work together to identify and rescue sex trafficking victims and arrest their pimps.

The new approach is being hailed by victims of trafficking and their advocates as a much-needed paradigm shift — and, the FBI says, is reaping results.

Ron Riggin, a Maryland State Police sergeant who recently retired from a long career spent searching for missing children and runaways, says he's been aware of the problem for some time, but just hasn't had the resources or cooperation to effectively combat it. The recent infusion of support and coordination from the feds, he says, has been a game changer.

"At this point, there's a federal task force that covers just about every state in the union, as far as I know, so that makes it easy for us when we have interstate cases," Riggin said recently during a Maryland Human Trafficking Task Force sting operation near Baltimore. To tackle the problem, the task force regularly peruses online escort ads, conducts stings, and offers services and support to the women they encounter.

Some sex worker advocates say that the approach is throwing the net too wide and leading to the arrests of too many women who are in control of their situations.

But the feds point to their results as their justification. Since 2008, task forces like the one Riggin is a part of have recovered more than 2,700 sexually trafficked children and convicted more than 1,350 pimps. 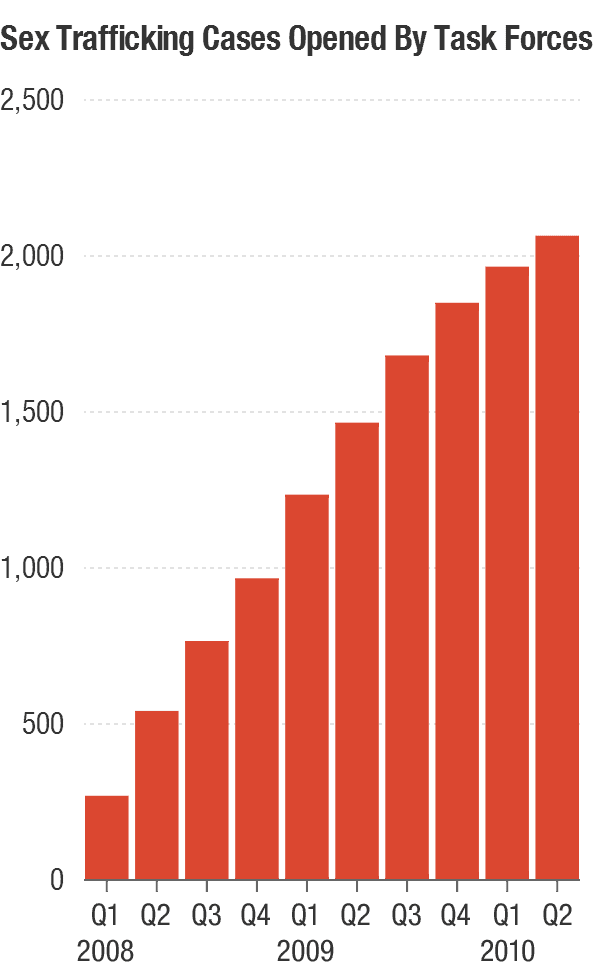 Looking For A Sense Of Belonging

The volume of cases is exposing a problem that has long been hidden in plain sight: Child prostitution, or sex trafficking of minors, happens in every state in the country, in poor and rich communities alike. And more often than not, victims are children and are American-born.

"Typically they are not the ones who are highly supervised at home," Riggin says. "I think they are running away from something at home, whether it's emotional or physical abuse or lack of love, or call it what you will. There is usually a reason they are leaving home. They don't have a reason to go to somebody."

The pimps, Riggin says, give the victims the attention and sense of belonging that vulnerable children desire.

The emergence of social media and online escort ads, experts say, has only exacerbated the long-standing problem.

"This can happen in any town," says Ron Hosko, assistant director of the FBI's Criminal Investigative Division. "We've seen it happen in very affluent areas of the country. Each of our field offices has reported these crimes, so we think that it's everywhere."

Last year, Hosko oversaw a team that uncovered a sex trafficking ring in affluent Fairfax County, Va. In that case, gang members recruited several adult women and at least eight high school girls through social media networks and contacts inside local schools. They plied them with drugs and alcohol, and controlled them with violence and intimidation.

Getting To The Local Level

Congress changed the legal definition of sex trafficking in 2000 to include recruiting or transporting a person by force, fraud "or coercion." As minors are legally unable to give their informed consent, anyone under the age of 18 is typically considered a victim.

It wasn't until 2008, though, that federal efforts to bring local protocol more in line with federal law took off. Since then, the FBI and DOJ have pumped resources into training law enforcement officers around the country on what to look for, how to approach potential victims, and how to connect them with services like housing, job training and counseling.

They have also made it a priority to gather evidence needed to prosecute their pimps.

The number of sex trafficking cases investigated and prosecuted at the local level is not yet known, but the FBI is gathering that data for the first time as part of its 2013 Uniform Crime Report.

Advocates, including Suzanne Tomatore of the Freedom Network, a national coalition of anti-human trafficking service organizations, say the new approach is making a difference.

But, she adds, there's still a ways to go — in training officers, in providing resources to those who want to help the victims build new lives and in making sure that victims' rights are protected.

"We all want to do the right thing, but I think it is important that the individual rights come first and [the victims] aren't pressured into cooperating with law enforcement," she says.

Renee Murrell, a victims advocate at the FBI field office in Baltimore, says that just a few years ago, most police departments dealt with these cases as child prostitution and simply put the victims into juvenile detention facilities.

"[A victim] was seen as a delinquent child," she says. "Because they're giving her drugs, so she may have a drug charge. She might get a shoplifting charge. All of that was masked as the issue when the trafficking was really the issue."

Of course, many law enforcement agencies still take that approach.