Accessibility links
Newtown Residents Demolish A School, And Violent Memories In Newtown, Conn., demolition work has started at the Sandy Hook Elementary School. Bricks will be pulverized and steel melted down. Workers must sign agreements forbidding any public discussion of the site. Last year, a shooting there left six adults and 20 students dead. 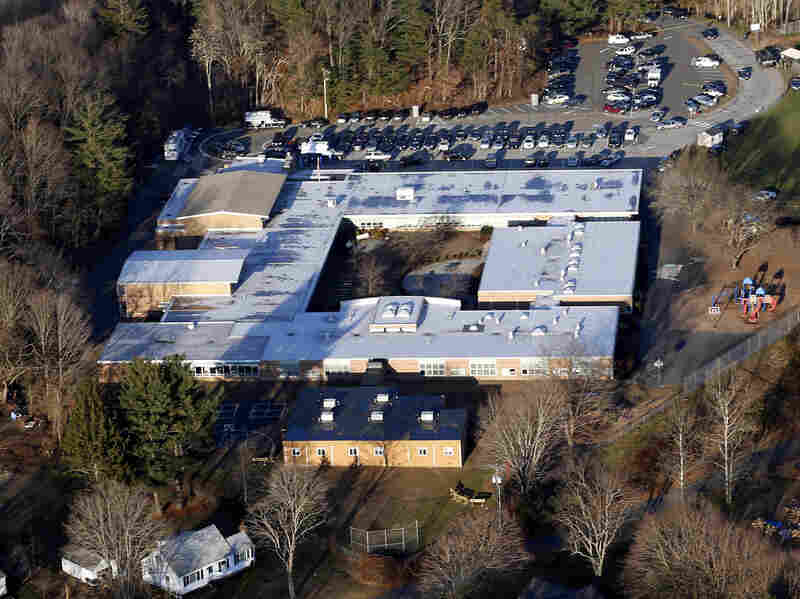 Sandy Hook Elementary School in Newtown, Conn., is shown last Dec. 14, when a gunman killed 20 children and six adults. The building is now being destroyed; a new school will be built on the site. Julio Cortez/AP hide caption 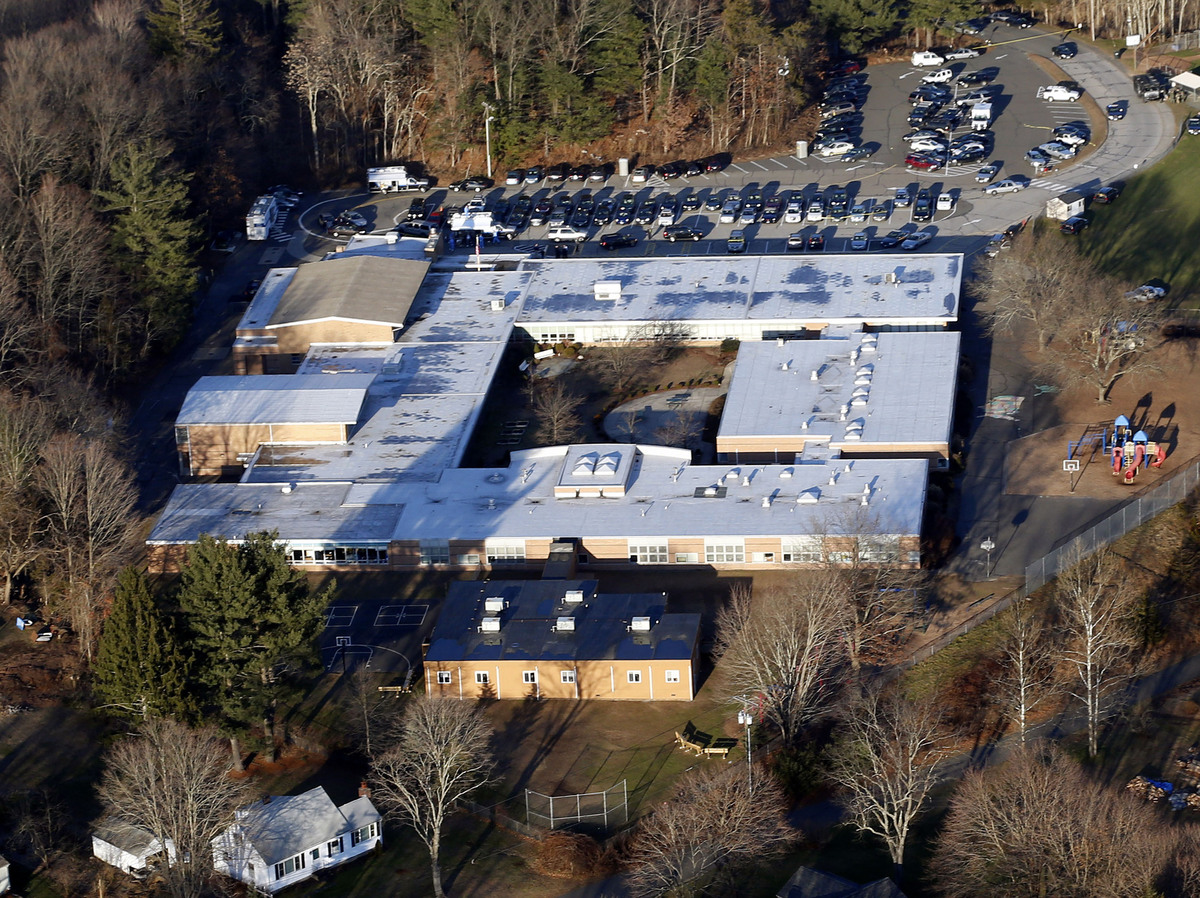 Sandy Hook Elementary School in Newtown, Conn., is shown last Dec. 14, when a gunman killed 20 children and six adults. The building is now being destroyed; a new school will be built on the site.

Demolition has begun at Sandy Hook Elementary School, where a gunman killed 20 students and six adults last December. Bricks will be pulverized, steel melted down and a new school built at the same location.

Allison Hornak attended Sandy Hook Elementary School as a kid. After college, she returned home to Newtown, Conn., and opened an art gallery that's within walking distance of where the mass killing took place.

Hornak says she has a lot of fond memories of Sandy Hook — like a teacher who let her chew gum in class, and the pathways through the school.

"The hallways all ran into one another and just formed this big loop," Hornak says. "And when you were walking through, you'd see the inner courtyard and watching the seasons change in that courtyard ... really stands out to me."

Since the shooting, residents have found themselves wrestling with a very personal question — what to do with a place that created so many fond memories, and one horrific one.

"It's where we bring up our kids. It's where our own family story plays out," says John Woodall, a local psychiatrist. "So, to have this building be the site of this horror cuts right to the core of people's identities."

After the Dec. 14, 2012 mass murder, Woodall counseled people in Newtown. For those parents and teachers, returning was not an option.

"They don't want to go back, and vehemently so. For some, it was just too overwhelming to go into that space again without becoming unhinged," he says. "You can't ask people to bear something that is, for them, unbearable."

After many public hearings and a town-wide referendum, residents voted to accept $50 million in state money to raze the building and construct a new school at the same site.

Demolition began this month, though none of it is visible from the street. Security is tight — outside and in.

Newtown First Selectman Patricia Llodra says all workers at Sandy Hook must sign confidentiality agreements that "essentially says that those workers will take no photographs, they'll remove no items, that they won't be discussing the process on social media."

Building materials will be processed on-site to ensure they don't pop up for sale. The town is also working to change the route parents use to drive into the new school, which Llodra says is an emotional "trigger point." 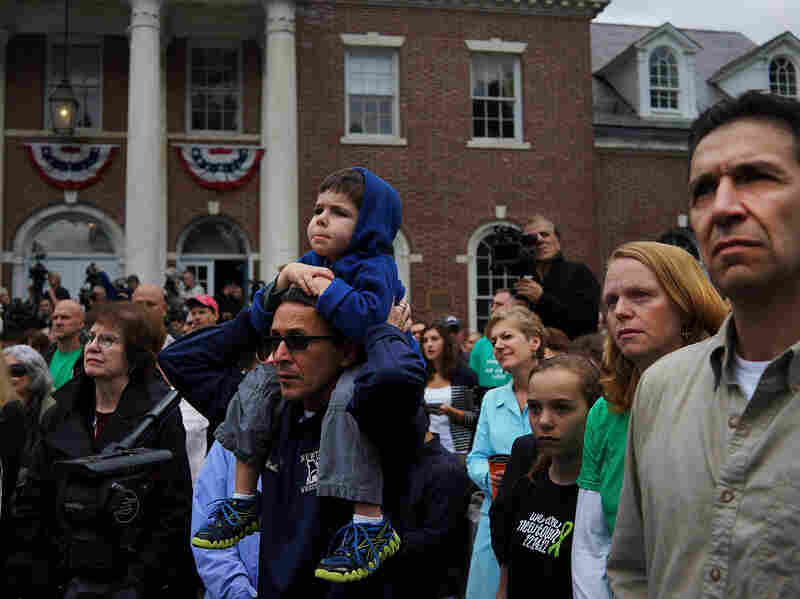 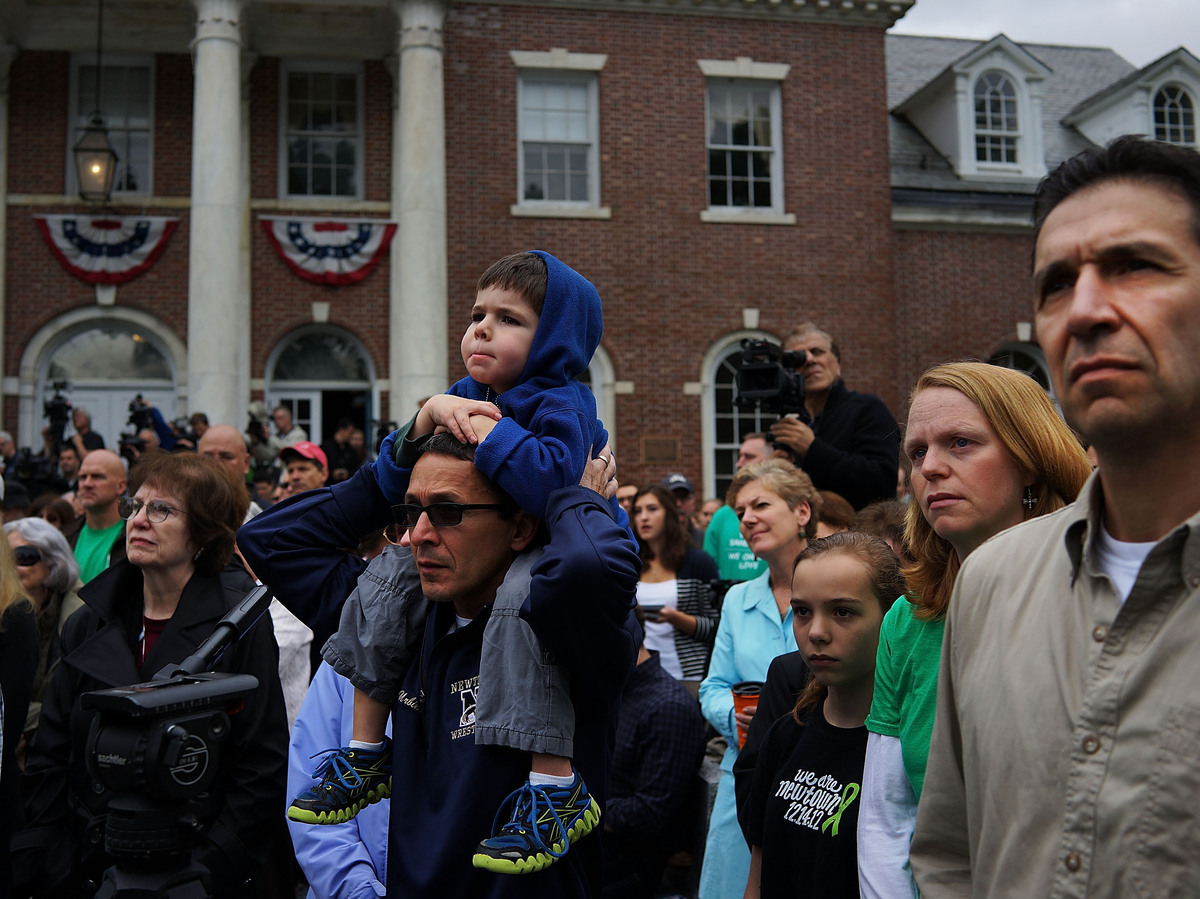 In June, people gathered in Newtown, Conn., to remember the massacre at Sandy Hook Elementary School.

"For many people, the last experience that families and teachers and kids had was running down that driveway to escape what they thought was imminent danger — and it truly was danger," says Llodra.

As the anniversary approaches, people in Newtown are seeing symbols of moving on everywhere — even in the new sidewalk installed that was installed outside Allison Hornak's art gallery in downtown Sandy Hook.

"People don't want to come here anymore — for a little bit, at least," says Hornak. "And yet, the town is making this effort to invite people ... back in, to walk through. I just thought that was really great. And I'm happy that they put that in. It's small, but kind of really symbolic."

The goal is to have the school razed by the first anniversary of the shooting, Dec. 14, though no town-wide event will happen to mark the anniversary.

Instead, Patricia Llodra says she hopes residents use the day to "pledge an act of kindness to one another."