Accessibility links
Death Becomes Whimsical On Dia De Los Muertos The Mexican Day of the Dead holiday is a time to remember the dead and prepare for their visit. It's also a time for food and friends. With Dia de los Muertos just around the corner, learn how to make a pumpkin and ancho chile mole and the traditional dessert bread, pan de muerto. 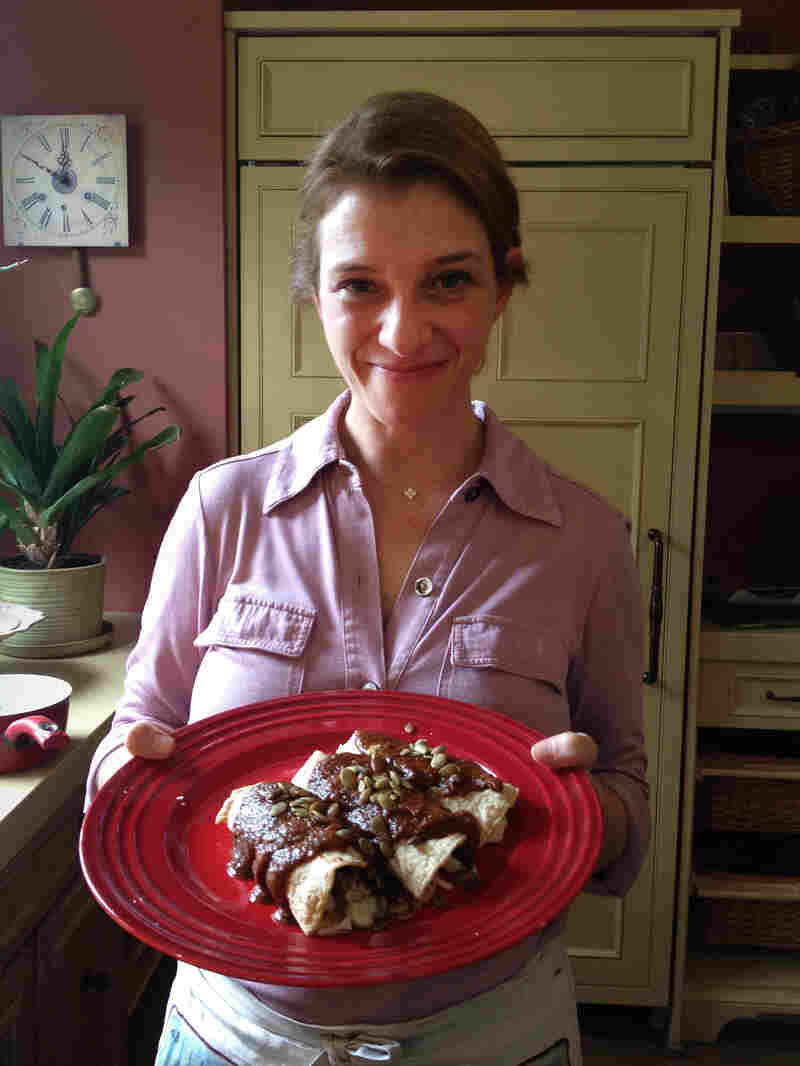 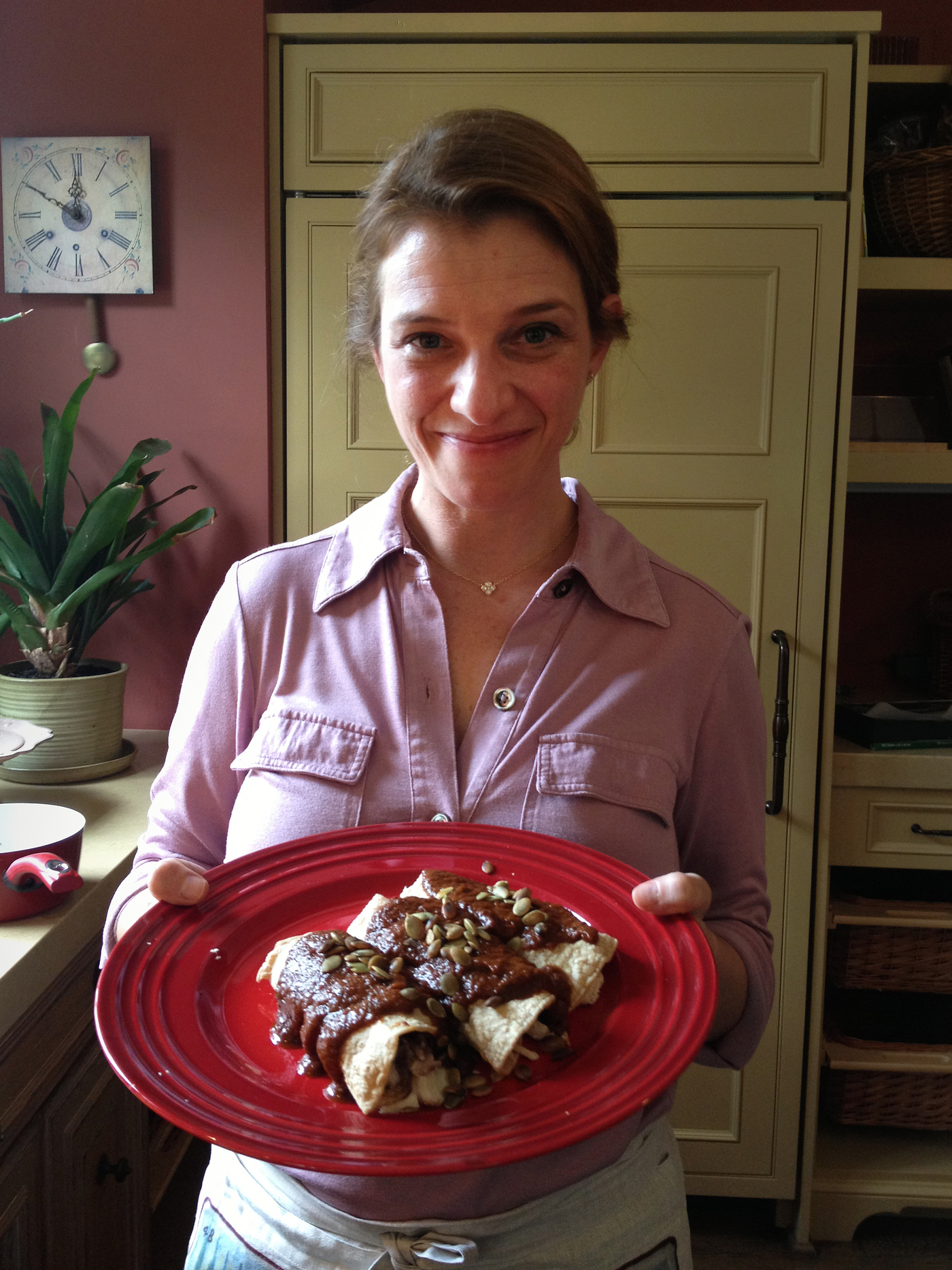 On the Mexican Dia de los Muertos holiday, the living remember the dead. Some believe they are communing with the deceased. While it may sound morbid, Pati Jinich, a Mexican-born blogger, food show personality and author of Pati's Mexican Table, says it's a joyous occasion.

"People get ready to welcome people — those who have deceased and that presumably have license to visit just once a year," Jinich told All Things Considered host Melissa Block.

The day before Halloween, people mark the day by cleaning their homes and sprucing up the graveyards of departed loved ones with flowers and decorations.

Death becomes whimsical on the Day of the Dead. People joke about death, they display miniature skeletons in fancy clothes, and children enjoy sugar skulls and other spooky confections.

Dia de los Muertos is also an occasion for traditional pan de muerto. While many buy this aromatic sweet bread, Jinich is not one of them. She says the dough can be "capricious" because it takes a lot of patience and requires multiple rises, but it's worth it.

"It is very messy, but it's so much fun," Jinich says.

Day of the Dead is also a time for families to make and share the favorite foods of their deceased loved ones, and Jinich says that often involves a mole, a thick sauce that has many variations and can be complex to make. But she has created one that's easy and a reflection of her Mexican heritage and her life in the U.S. It's a seasonal take on a traditional mole that's made from pureed pumpkin and ancho chiles. 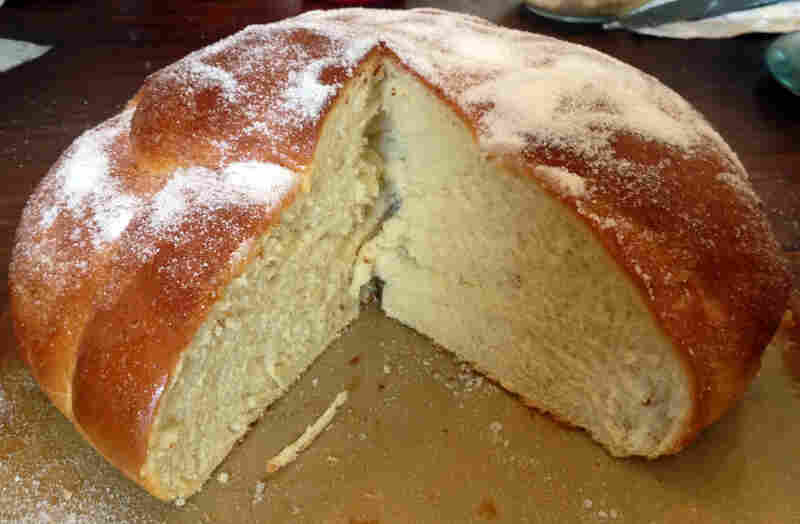 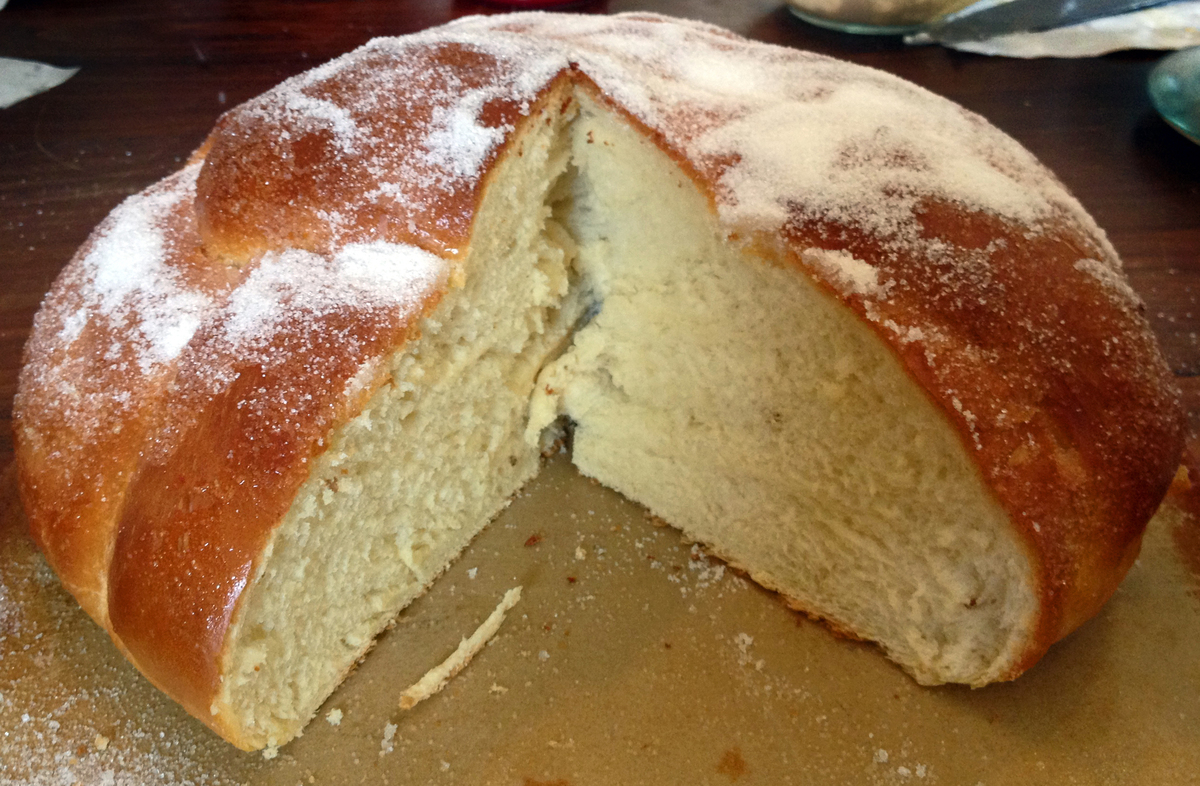 2 packages active dry yeast (1/4 ounce each), or about 4 heaped teaspoons

1/4 cup unsalted butter at room temperature, plus more to grease the bowl, and 2 tablespoons to melt and brush on top

1/2 cup granulated sugar to make the dough, plus 1/2 cup for dusting the bread

In a small bowl, pour the lukewarm milk — making sure that it is not hot nor cold or the yeast will not react — and stir in the dry yeast granules. Give the yeast a couple of minutes to sit in the liquid, and stir with a spatula until it is thoroughly and evenly dissolved. Give it time: Stir a little, pressing gently on the yeast that has not yet dissolved with the spatula, give it a bit more time to sit in the milk, stirring again, press again. Once it has completely and evenly dissolved, add 1/2 cup flour. Mix it, combining thoroughly, until it has no lumps. It will be gooey, runny and sticky. Leave it in the warmest area of your kitchen, for about 20 to 30 minutes, until it puffs up (to about double or triple its volume) and has bubbled on top. I like to place a saucepan or cup with boiling hot water right next to it, but it's not necessary.

In the bowl of a mixer, over medium low speed, beat the butter until soft. Add the sugar and beat until combined and fluffy. Add one egg at a time. Once eggs are incorporated, add the milk and yeast mixture. Then, 1/2 cup at a time, add the rest of the flour (3 1/2 cups). Stir in the orange blossom water if using or plain water. Also add the anise seeds and a pinch of salt. The dough will look wet, runny and sticky, but continue beating anywhere from 7 to 10 minutes, until all the dough comes off the sides of the mixing bowl. It will be elastic and sticky, but it will hold itself together.

Butter a large mixing bowl that can hold the dough and will be able to hold it as it doubles or triples its volume. Place the dough in the bowl, cover it with a cloth or clean kitchen towel and leave it in the warmest area of your kitchen, that is draft-free, making sure it is not next to a window or door that gets opened. Leave it to rest and puff up anywhere from 2 to 3 hours, until it doubles its volume at least.

Punch the dough with your fist, flip it over, cover with plastic wrap and place in the refrigerator overnight. The next day, remove the plastic wrap, place a cloth or kitchen towel on top and let it to come to room temperature.

Take off a third of the dough to make the bread decorations: Make a 1- to 2-inch ball and use the rest to make 2 ropes. They need not be smooth or perfect, as the dough is quite sticky, and no need to worry because they will look beautiful once the bread is baked and covered with sugar.

Butter a baking sheet or a bread or pizza stone, and make a ball with the rest of the dough. Place it in the center of the baking sheet and flatten it a bit on top. Place the dough ropes making a criss-cross — Mexican bakers usually shape the ropes to resemble bones, having thicker and thinner parts — and the ball on the top, right where they cross. Cover the bread with a cloth or kitchen towel, and let it rise and puff up again, for 1 to 2 hours.

Preheat the oven to 350 degrees. Bake the bread for for about 35 minutes. Halfway through baking, after about 20 minutes, cover the loaf with parchment paper or aluminum foil to prevent it from browning too much.

When they are ready, they sound huecas, or hollow, if you hit the bottom of the bread.

Melt the butter and brush all over the bread. Sprinkle sugar all over until completely covered.

1 1/2 teaspoon kosher or sea salt, or more to taste

Place the onion and garlic in a baking sheet under the broiler. Char for 9 to 10 minutes, flipping once in between. Once they are soft and charred, remove from the heat. When the garlic is cool, peel.

In an already hot skillet or comal set over medium-low heat, toast the ancho chiles for about 15 to 20 seconds per side, until they brown and crisp without burning. Place toasted ancho chiles in a bowl and cover with boiling water. Soak for 10 to 15 minutes until they are plumped up and rehydrated.

In the same skillet or comal, toast the cloves and allspice until aromatic, about a minute. Remove from the heat. Toast the almonds and cinnamon, stirring often, until lightly browned, 4 to 5 minutes.

Place the onion, garlic, chiles, 1/2 cup of chile soaking liquid, almonds, cloves, cinnamon and allspice in the blender and puree until smooth.

In a soup pot or casserole dish, heat the oil over medium heat and pour in the pureed mixture. Add the salt and sugar. Cook for about 5 minutes, stirring frequently to help prevent the sauce from sticking to the bottom of the pan. The color will darken considerably.

Use the mole sauce to pour over grilled, broiled or boiled chicken, meat or fish. Sprinkle with toasted pumpkin seeds for some added flavor and crunch.