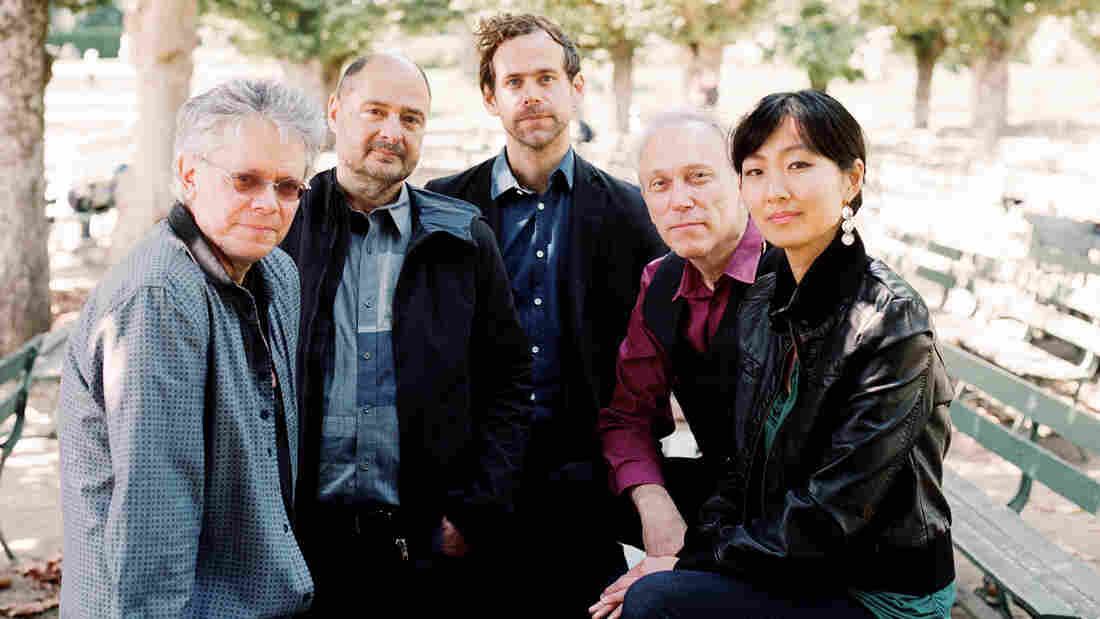 Kronos Quartet's new album, Aheym, comes out Nov. 5. All the music on this album was composed by Bryce Dessner (center) of the rock group The National. Andrew Paynter/Courtesy of the artist hide caption

Bryce Dessner is a man who slips in and out of musical guises with disarming ease. In the rock world, he's known as a member of The National (along with his twin brother, Aaron) and a founding member of Clogs. But in contemporary classical circles, Dessner, who studied composition and classical guitar at Yale, hangs with the likes of eighth blackbird, So Percussion, the Bang on a Can All-Stars, Philip Glass and Steve Reich.

And now he's gained another group of revered collaborators: his first works written for string quartet are being played by the San Francisco-based Kronos Quartet, one of the landmark groups in contemporary music and a catalyzing force for literally hundreds of composers over their nearly 40-year-long career. Four of Dessner's works involving Kronos are being released as the album Aheym (out Nov. 5).

Aheym, which is also the name of the album's opening work, means "homeward" in Yiddish. Dessner had mentioned to the quartet's first violinist and artistic director, David Harrington, that his grandmother emigrated from Russia via Poland. Harrington told Dessner that the ensemble was slated to play a concert in the Polish city of Lodz, where Dessner's grandmother had grown up, and urged her to take his grandmother's story as a point of artistic departure. Aheym is a dense and kinetic work, stitched with nearly obsessively articulated cells of energy that are occasionally interrupted by lyrical and luminous melodic lines.

The knots of Aheym unravel in the languorous next piece on the album, Little Blue Something, in which the four members of Kronos (Harrington and John Sherba, violins; Hank Dutt, viola; and Sunny Yang, cello) transform themselves into a pair of dusky-voiced violas da gamba, predecessors to modern cellos. Meanwhile, Tenebre, a piece for string quartet and pre-recorded track whose name literally means "darkness" or "shadows," is a luminous work that belies its title, its silky lines culminating in a piercing, sustained conclusion that suddenly fades to one last, nearly flickering note.

The album's concluding piece, Tour Eiffel, is a glowing setting of a magic-infused poem by Chile's Vicente Huidobro, scored for chorus (here, performed by the group who commissioned the work, the wonderful Brooklyn Youth Chorus), string quartet, guitar, piano, vibraphone and tom-toms. It's a beautiful album from start to finish. Even if work like this is what Dessner wants to pursue in his "spare" time, it hardly should be taken as ancillary output. This is gorgeous and full-hearted music.