Accessibility links
Energetic, Intimate 'Letters' Reveal Private Leonard Bernstein The Leonard Bernstein Letters, edited by Nigel Simeone, compiles correspondence to and from the legendary composer and conductor. The letters — from serious to silly — offer a detailed look at both the distinguished career and the adventurous personal life of a singular American genius. 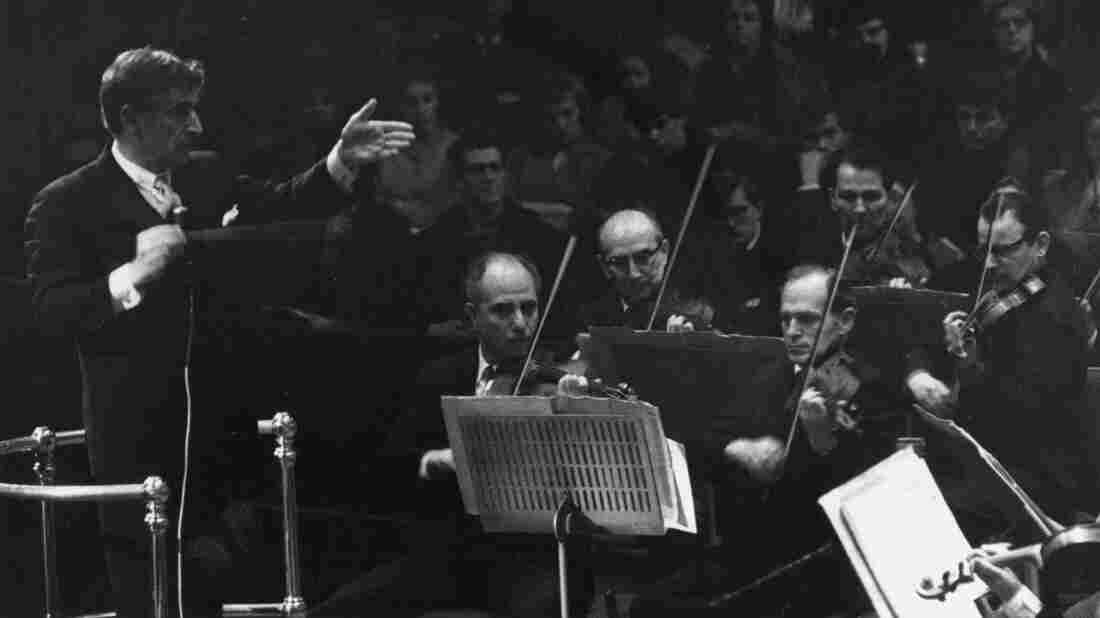 Composer and conductor Leonard Bernstein, shown here conducting the New York Philharmonic orchestra in 1963, was a legend in American music. Letters to and from Bernstein have been compiled into The Leonard Bernstein Letters, a new book edited by Nigel Simeone. Express Newspapers/Getty Images hide caption 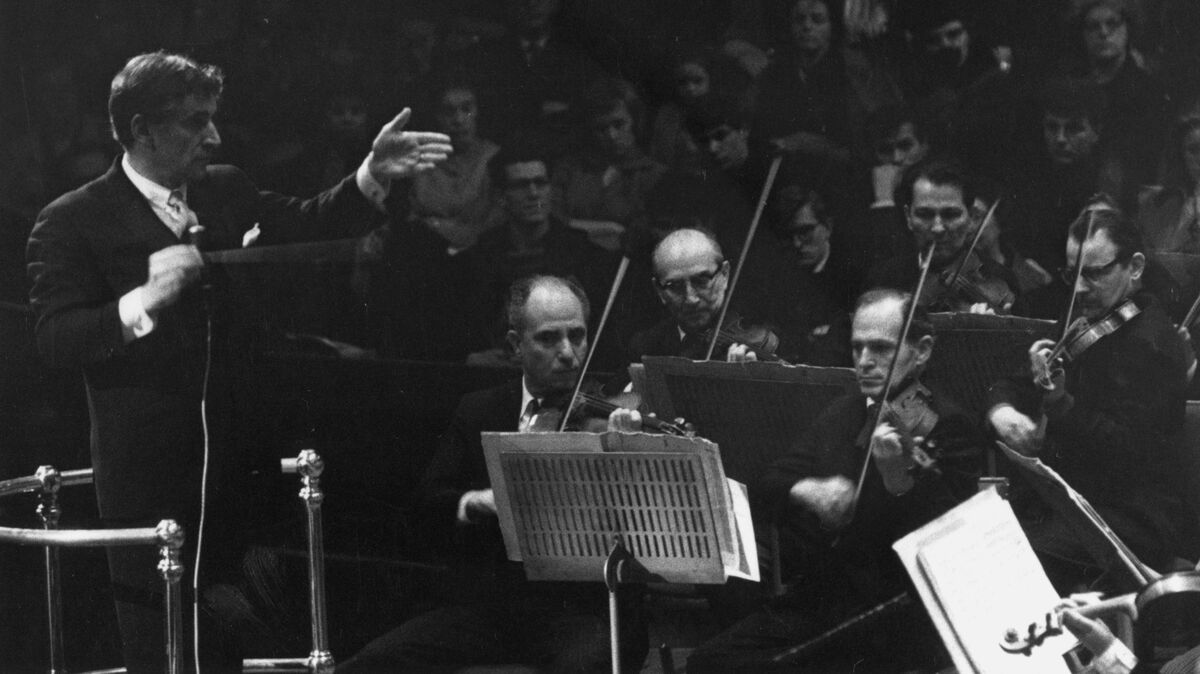 Composer and conductor Leonard Bernstein, shown here conducting the New York Philharmonic orchestra in 1963, was a legend in American music. Letters to and from Bernstein have been compiled into The Leonard Bernstein Letters, a new book edited by Nigel Simeone.

Leonard Bernstein was a singular American genius. One of the great orchestra conductors of the 20th Century, he was also a composer of hit musicals like West Side Story, as well as symphonies and ballets. He was a teacher and television personality — his Young People's Concerts introduced generations of children to classical music.

But that was the public man. A new collection of letters written both by and to Bernstein is being published this week. It's an eye-opening volume: a glimpse into the personal life of a legend. 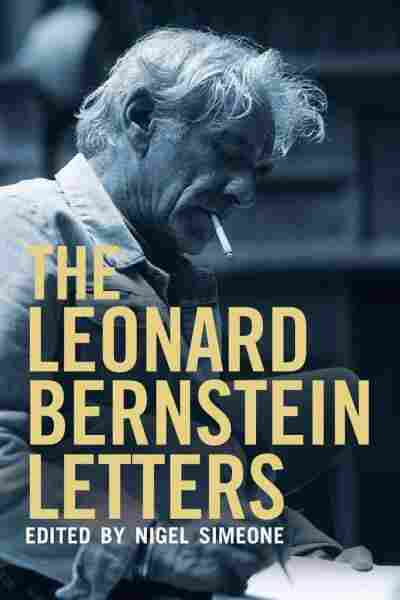 by Leonard Bernstein and Nigel Simeone

A 'Who's-Who' Of The Century

Nigel Simeone, who edited The Leonard Bernstein Letters, read through 10,000 of them before selecting the 650 that appear in the book. They go from Bernstein's adolescence in 1932 to right before his death in 1990, and it's not hyperbole to say that the correspondence represents a who's-who of many of the greatest figures of the 20th Century.

Some letters are serious; some are silly. There are mash notes from Bette Davis and word games with Stephen Sondheim. Simeone says these letters, with family, friends, lovers and colleagues, reveal a private Bernstein.

"I mean, he is a mass of contradictions," Simeone says. "But, in a way, a more kind of credible human being emerges. He's confused and insecure and whatever and all the things that we all are. And I find that, actually, rather endearing."

One figure who appears frequently in the book is Aaron Copland, the dean of American composers. The elder Copland first met the enthusiastic young Bernstein when he was a sophomore at Harvard, says Bernstein's first-born daughter, Jamie.

"You know, what began as this sort of avuncular relationship with this young whippersnapper really changed into something else entirely, when my father became the primary booster for Copland's music, all over the world," she says.

Copland and Bernstein's correspondence includes this gem, which Copland sent to Bernstein in 1940:

"What terrifying letters you write: fit for the flames is what they are. Just imagine how much you would have to pay to retrieve such a letter forty years from now when you are conductor of the Philharmonic."

"Forty years from now. Well, this was 1940 and it didn't nearly take that long for my dad to have that post," Jamie Bernstein says.

Bernstein returned again and again to the question of whether he should devote his energies to composing or to conducting. Jamie Bernstein says some insight into this struggle can be found in a 1939 letter he wrote to a college roommate:

"You may remember my chief weakness — my love for people. I need them all the time — every moment. It's something that perhaps you cannot understand: but I cannot spend one day alone without becoming utterly depressed."

"Now, that was amazing that he wrote that all the way back then, because it stayed true to the very end of his life." Jamie Bernstein says. "And that was the hardest thing for him about composing — it was so lonely!"

It's not surprising, then, that Bernstein frequently wrote scores for both theater and ballet, where there was a built-in element of collaboration. And, without question, one of the most intense collaborations Bernstein had was with the choreographer Jerome Robbins. But Robbins was a difficult man, says Jamie Bernstein.

"I think Steve Sondheim was the one who said there were only two things that my father was afraid of, and they were God and Jerome Robbins," she says. "And that was the joke. But it was kind of true."

The book has working letters between Bernstein and Robbins on their first ballet together, Fancy Free, as well as their most famous work, West Side Story.

"I think Robbins was one of the very, very few people who could really make Bernstein do what he thought he should be doing and really just insist on bringing out the best of him," says Simeone. "There's a kind of fierce work ethic there, as well as just plain fierceness, sometimes."

A Lover, A Husband, A Father

Spots in the book show a deep tenderness between Bernstein and his wife Felicia. Bernstein had a complicated love life, with many affairs and deep relationships with men, but he was a devoted husband and father. In an early letter, right after they got married, Felicia writes to her husband, L.B., with surprising clarity:

"First: we are not committed to a life sentence — nothing is really irrevocable, not even marriage (though I used to think so).

Second: you are a homosexual and may never change — you don't admit to the possibility of a double life, but if your peace of mind, your health, your whole nervous system depend on a certain sexual pattern what can you do?

Third: I am willing to accept you as you are, without being a martyr or sacrificing myself on the L.B. altar."

"When I read that, I winced," says Jamie Bernstein. "Because, in a way, she did sacrifice herself on that altar, one might say."

While the book covers some heartache and sadness, most of the letters document Bernstein's boundless energy and intimate relationships, says Simeone.

"They're full of vibrant, funny, excited, spontaneous, sometimes, you know, crazy ideas," he says. "I think that the real excitement for me is that a much more kind of 'un-presented' Bernstein comes out of these; this is the real man, writing to close friends, on the whole."