Accessibility links
Is Rebuilding Storm-Struck Coastlines Worth The Cost? Since Hurricane Sandy struck the East Coast a year ago, the federal government has spent millions to repair the devastation. But with a changing climate, more storms — and more damage — are likely on the way. A geologist argues it's time to rethink the strategy, but Long Beach locals are thankful for the rebuilding efforts. 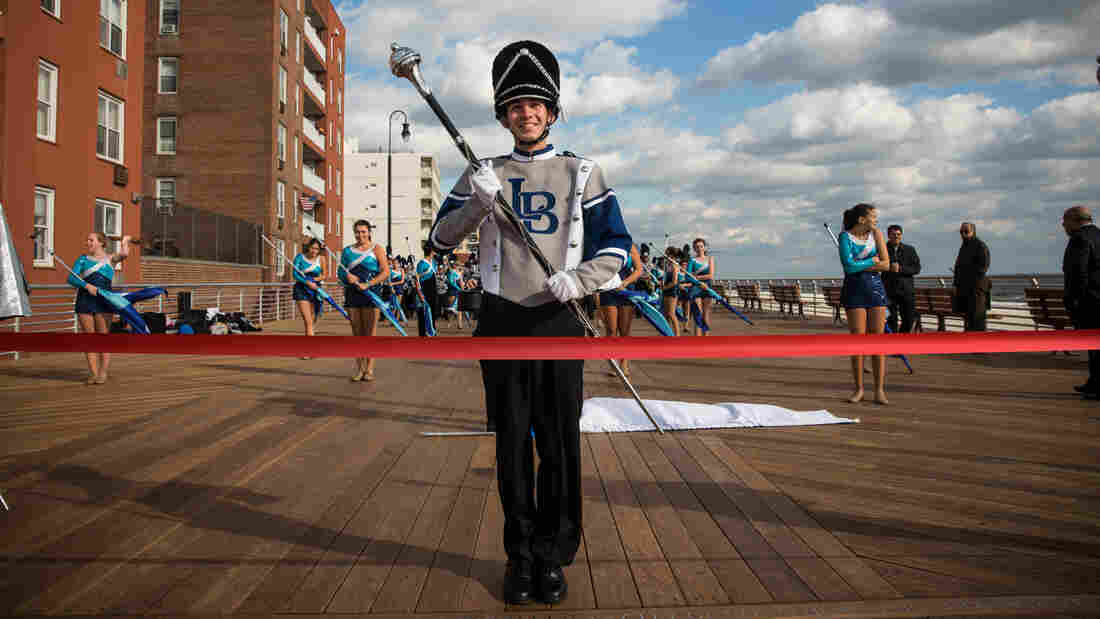 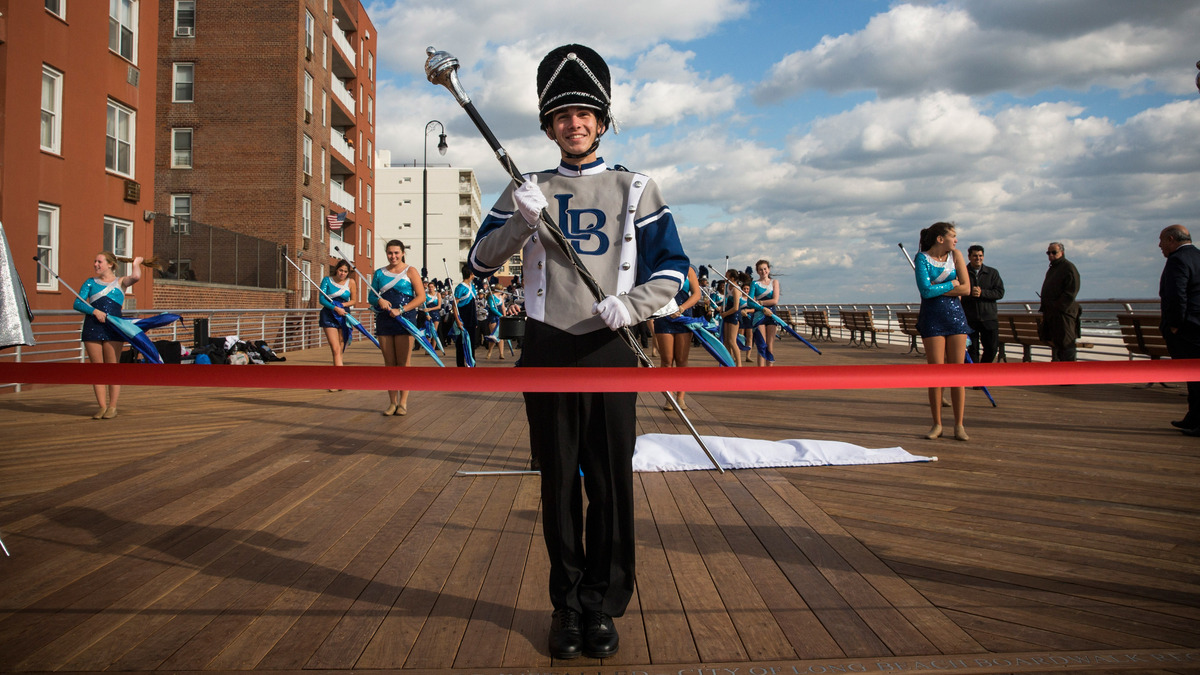 The Long Beach High School marching band prepares to march down the Long Beach boardwalk during a ribbon-cutting ceremony Friday.

One year ago Tuesday, Hurricane Sandy bore down on the East Coast, devastating shoreline communities from Florida to Maine.

Many of these areas have been rebuilt, including the Long Beach boardwalk, about 30 miles outside New York City. Officials held a ribbon-cutting ceremony for the new boardwalk Friday.

Ninety percent of the funding for the restoration came from the federal government. The Federal Emergency Management Agency paid $44 million to repair the devastation.

Jack and Roseanne Vanderbeck love the new boardwalk. They come every weekend to power walk along the beach.

"I missed it last winter," says Jack Vanderbeck. "The old boardwalk actually was getting beat up a lot. This is much easier to walk on. People now don't get splinters."

"It's really beautiful," his wife adds. "They really did a great job." 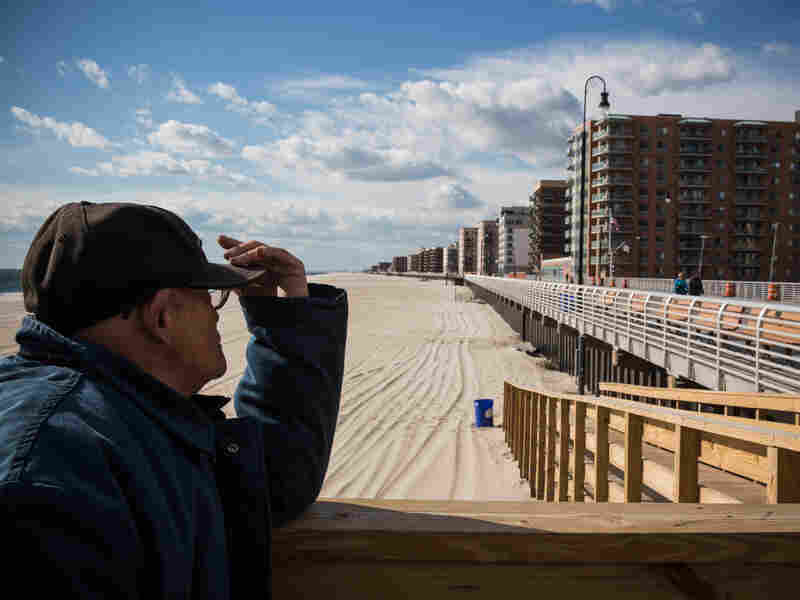 From an environmental and economic perspective, rebuilding the coast might not be worth it. But locals have a different view. Andrew Burton/Getty Images hide caption 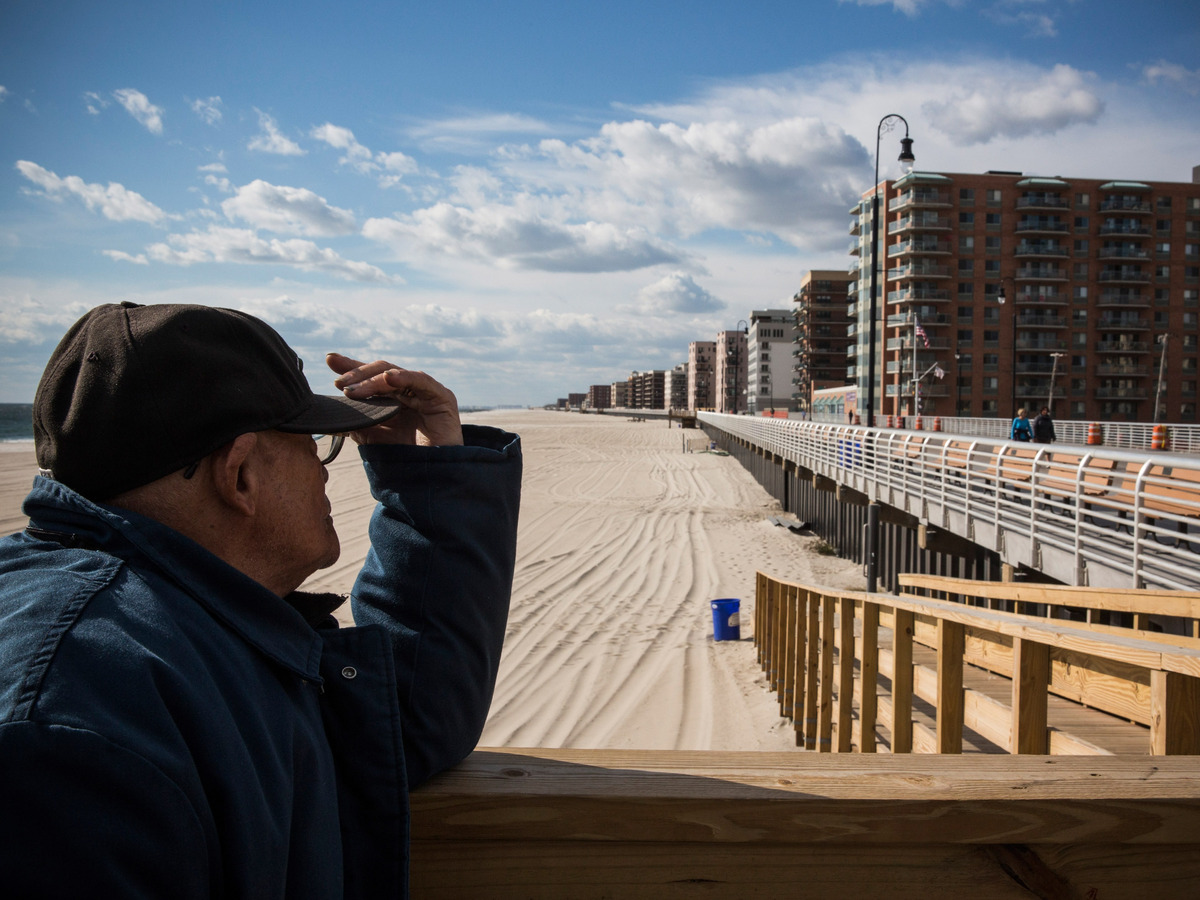 From an environmental and economic perspective, rebuilding the coast might not be worth it. But locals have a different view.

But should the federal government pay for shore restorations, when the beaches are sure to be hit and damaged by future storms?

Rob Young, who directs the Program for the Study of Developed Shorelines at Western Carolina University, is one of many geologists who say taxpayers are shelling out too much cash to rebuild coastal areas that will continue to be ravaged by the effects of climate change.

"After storms, the federal government creates this moral hazard, in my opinion," Young says. "We spend billions of dollars rebuilding coastal communities, a lot of it in place."

Young suggests that some coastal areas should be abandoned altogether because climate change is eating away at the nation's shorelines.

"The primary response post-Sandy has been to elevate some homes and elevate some infrastructure," he says. "So it's like you're standing in the river and the flood is coming, and instead of getting out of the river, you just roll up your pant legs, or hike up your skirt."

Besides Long Beach, other parts of the New York area were hit hard by Hurricane Sandy, including lower Manhattan. Damages, including lost economic activity, were estimated at close to $20 billion.

Mayor Michael Bloomberg set up a task force to look at how the city could better protect itself from a rising sea level and increasing storm events linked to climate change. Seth Pinsky, who ran that task force and is now executive vice president of RXR Realty, agrees that certain parts of Manhattan are vulnerable during storms.

But Pinsky says retreating is not an option.

"We're dealing with 400 years of settlement here in New York City," he says. "In New York today, we have 70,000 buildings — representing over 500 million square feet of built area — that are in our 100-year flood plain. The idea that we're going to be able relocate those people, their jobs, their homes, that built infrastructure in any foreseeable future is just not realistic."

People like Charlie Minch love the beach and the new boardwalk. He drives here a couple times a week with his sister, Carol Halmy.

"It's nice," Minch says. "The boardwalk itself is nice. And it gives me something to do."

His sister says it's "certainly worth the money they put into it."

But geologist Rob Young says that sooner or later the money it takes to rebuild coastal areas — storm after storm — isn't going to be worth it anymore. Making that case to the people who live here, though, will be difficult.

"Any discussion of changing the way we do business at the coast and potentially not rebuilding some areas makes local residents nervous," Young says. "The issue is how long into the future can we afford as a nation to hold every shoreline — on East Coast to the Gulf Coast and the West Coast — in place."

Last week, the Department of the Interior released $162 million for research and restoration to protect the Atlantic Coast. The money will go to 45 projects, from Maine to North Carolina. Such funding sets an expensive precedent, Young says.