Accessibility links
Interview: Kalyanee Mam, Filmmaker Of 'A River Changes Course' For young Cambodians, the promise of modernization comes paired with a threat: the rapid erasure of traditional ways of life. In A River Changes Course, filmmaker Kalyanee Mam follows three young Cambodians, finding in their stories a set of questions and challenges that are surprisingly universal.

In Kalyanee Mam's new documentary, A River Changes Course, a teacher stands before a room packed with grade-schoolers, leading them in an arithmetic drill. They're in Cambodia, and though the drill is in the Khmer language, the body language is clear enough as the children hold up their hands one at a time, displaying all five fingers: 5 and 5 make 10, in most any dialect.

That's one of the film's few optimistic scenes, however — and it's one not typical of the experiences of the three young Cambodians the filmmaker follows. Like many of their compatriots, they live off the land, or the water. For them, a classroom education remains a distant dream. 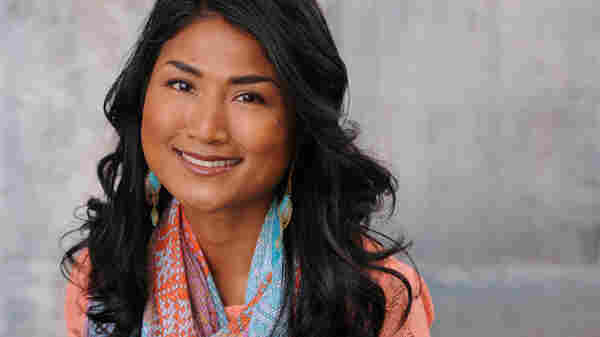 Kalyanee Mam was born in Cambodia and came to the United States with her family while she was still young. Her film A River Changes Course won the Grand Jury Award for World Cinema Documentary at the 2013 Sundance Film Festival. Migrant Films hide caption 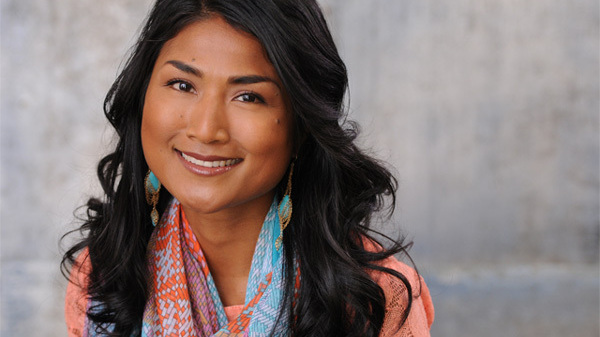 Kalyanee Mam was born in Cambodia and came to the United States with her family while she was still young. Her film A River Changes Course won the Grand Jury Award for World Cinema Documentary at the 2013 Sundance Film Festival.

Among the three is Sari Math, a young man whom we first meet fishing with his father. Forced to leave that job, he goes to work on a cassava plantation owned by the Chinese. Another is Khieu Mok; faced with mounting debt, she prepares to leave her village and her family behind for the big city of Phnom Penh, where she'll go to work at a garment factory.

And Sav Samourn, a farmer in the mountainous jungles of northeast Cambodia, fears the creep of loggers deeper into her forest.

"We used to be afraid of animals here in the jungle," Sav says in the film. "Now there are no more animals. We are afraid of people who are going to destroy the forest."

Kalyanee Mam's film was honored earlier this year at the Sundance Film Festival. Mam joined NPR's Robert Siegel on Monday's All Things Considered to talk about her film, about the tides of rivers and of history, and about the crush of modernization that's driving many Cambodians from their traditional livelihoods.

On the geography behind the film's title

There's a river called the Tonle Sap River. It changes course twice a year, and the reason for that is because of the flow from the Mekong River. I chose this for the title of the film because of the changing lives of the people in Cambodia — because of modernization and the development that's taking place in the country. 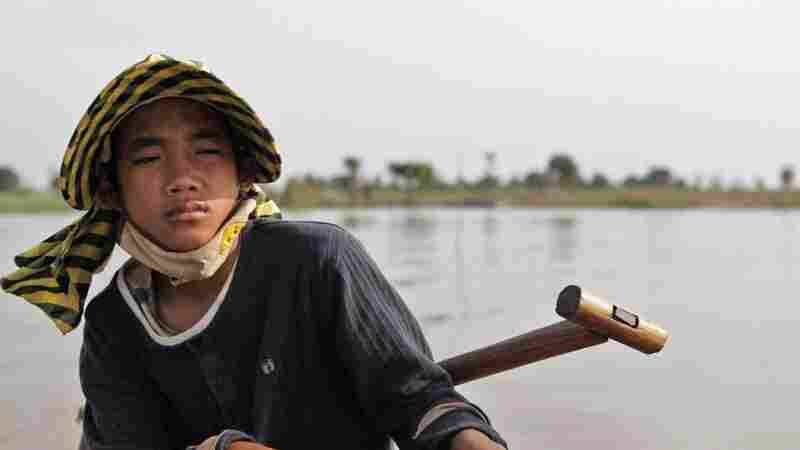 At 17 years old, Sari Math has left his father behind to work on a Chinese-owned cassava plantation. Faced with an ever-diminishing catch, he and his father could no longer support themselves by fishing alone. Migrant Films hide caption 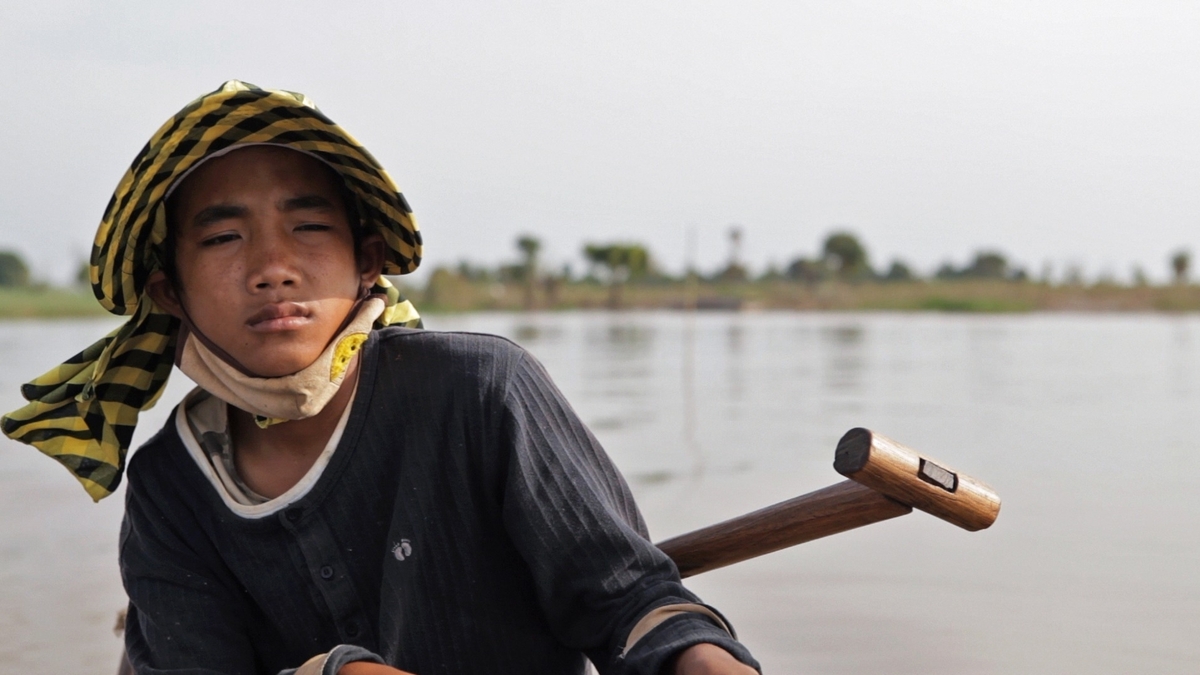 At 17 years old, Sari Math has left his father behind to work on a Chinese-owned cassava plantation. Faced with an ever-diminishing catch, he and his father could no longer support themselves by fishing alone.

On Sari Math, a fisherman's son with a bleak outlook on his prospects

I remember meeting Sari when he was only 14 years old, and this was in 2008. When I first met him, I just completely fell in love with him. He was this young, vivacious boy, like any other 14-year-old. He brought me to his village, and he took down the Quran from the rafters of the floating mosque in his village, and he started reciting from it.

And I thought to myself, I need to follow the story of this boy, I need to find out what will happen to him. [His eventual disillusionment] just shocked me. He was only 17 years old ... and it was as if the world had fallen around him.

On threats to the livelihood of Cambodian fishing cultures like Sari's 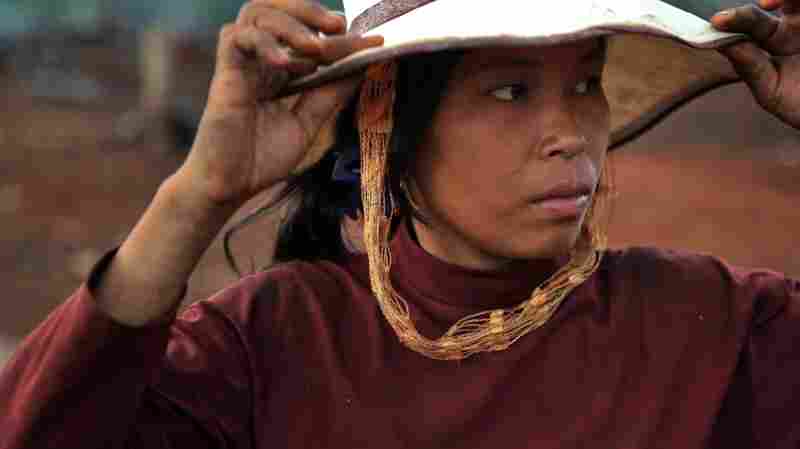 In the mountainous jungles of northeastern Cambodia, Sav Samourn depends on the forests to feed her family. She has come to fear loggers more than the dangerous jungle animals that once plagued her people. Migrant Films hide caption 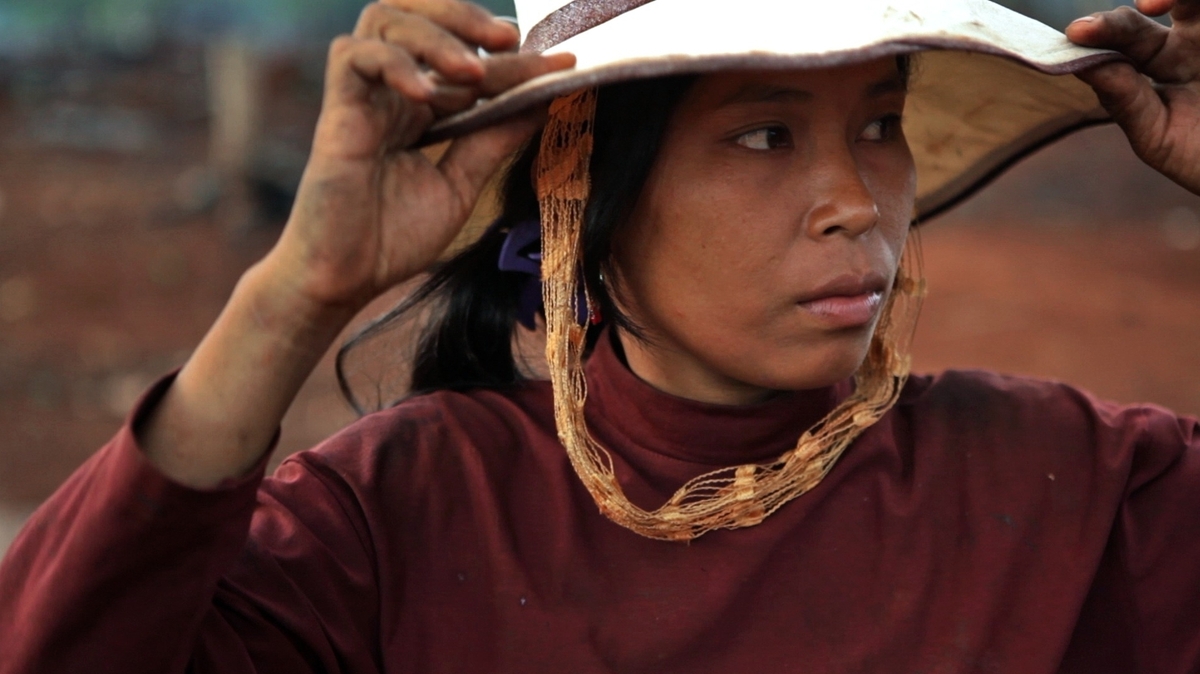 In the mountainous jungles of northeastern Cambodia, Sav Samourn depends on the forests to feed her family. She has come to fear loggers more than the dangerous jungle animals that once plagued her people.

The fishing in Cambodia has really declined in the last few years for several reasons: because of the fishing concessions that have been granted to large companies by the government to fish in the waters, and because of the hydroelectric dams that are being built upstream along the Mekong River.

On indigenous peoples' concerns about deforestation

[Sav Samourn] belongs to the Jarai community, and this is one of 24 indigenous ethnic groups that exist in Cambodia today. Many of the groups are under attack right now, because of the logging that's taking place in Cambodia.

There's this contradiction in our lives right now where we are trying to understand where we stand. Should we preserve and conserve land and the forests — the natural resources that belong to us — or should we move forward and develop and acquire technology?

On those who depend on traditional practices for their livelihood

[Khieu Mok, for instance] wants everything that we have. ... She just wants to be able to live with her family and be with her family. And the solution that she found was that, instead of her going away and going to the factory, the factory [should] actually come to her.

When I first heard her say that, I was really shocked. I couldn't understand why I was so shocked, and then I realized that I come from a very Western, very privileged background. Yes, I fled the Khmer Rouge. Yes, I came from Cambodia. But I've been given this opportunity in the United States to have this great education ... so I understand what would happen if the factory came to her village. But she doesn't understand. She can only see what the opportunities will bring; she doesn't understand the consequences.

In many ways, Khieu actually I think represents all of us. I think all of us are living in a deep well, where we don't really understand the consequences of our actions. We may understand what would happen if a factory came to her village, but we may not fully comprehend what could happen if we continue to drive every day — you know, if the whole planet is covered with cars and we continue to be dependent on fuel and oil and so forth.