Accessibility links
Never Back Down: Fresh Air Remembers Lou Reed "In Lou Reed's world, when you were Lou's friend you knew it," his longtime publicist Bill Bentley tells Terry Gross. Fresh Air dedicates an entire hour to the transgressive and transcendent Velvet Underground co-founder, with music and commentary by original Velvets John Cale and Maureen Tucker. 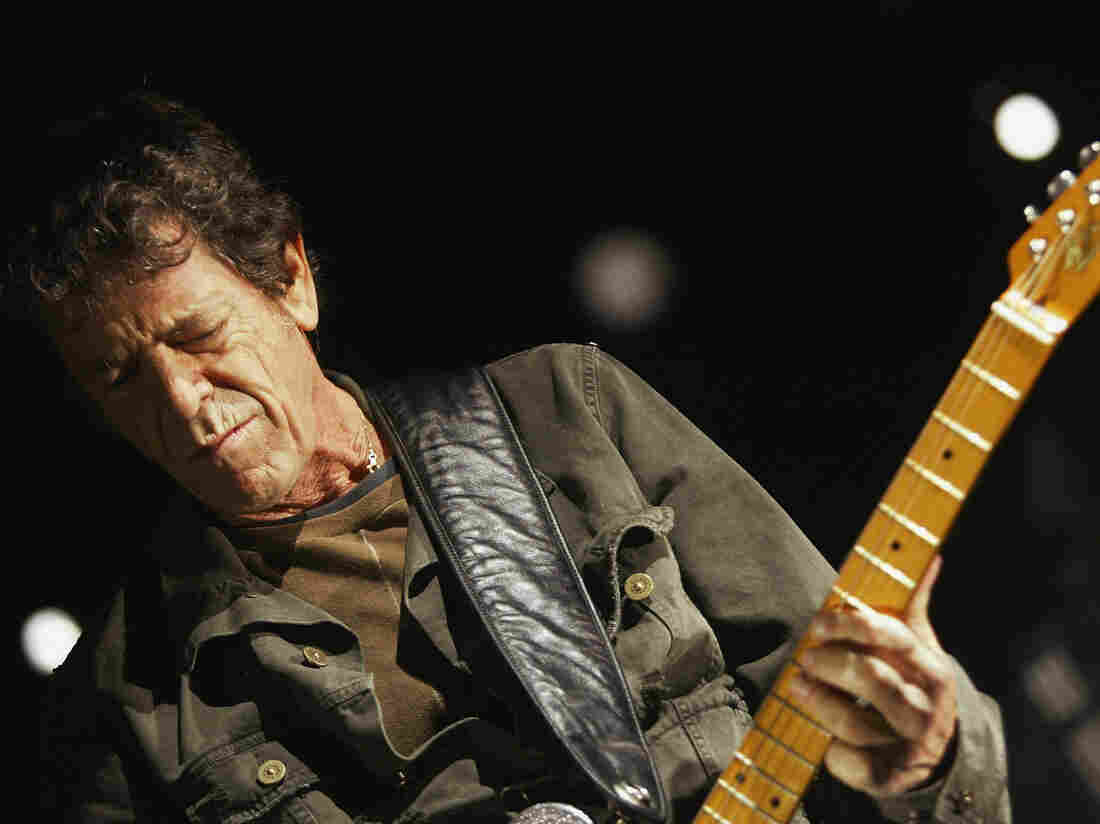 "[Lou Reed] really saw the beauty of life, and wanted to be a person who could live in that beauty as often as possible," longtime publicist Bill Bentley says. Karl Walter/Getty Images hide caption 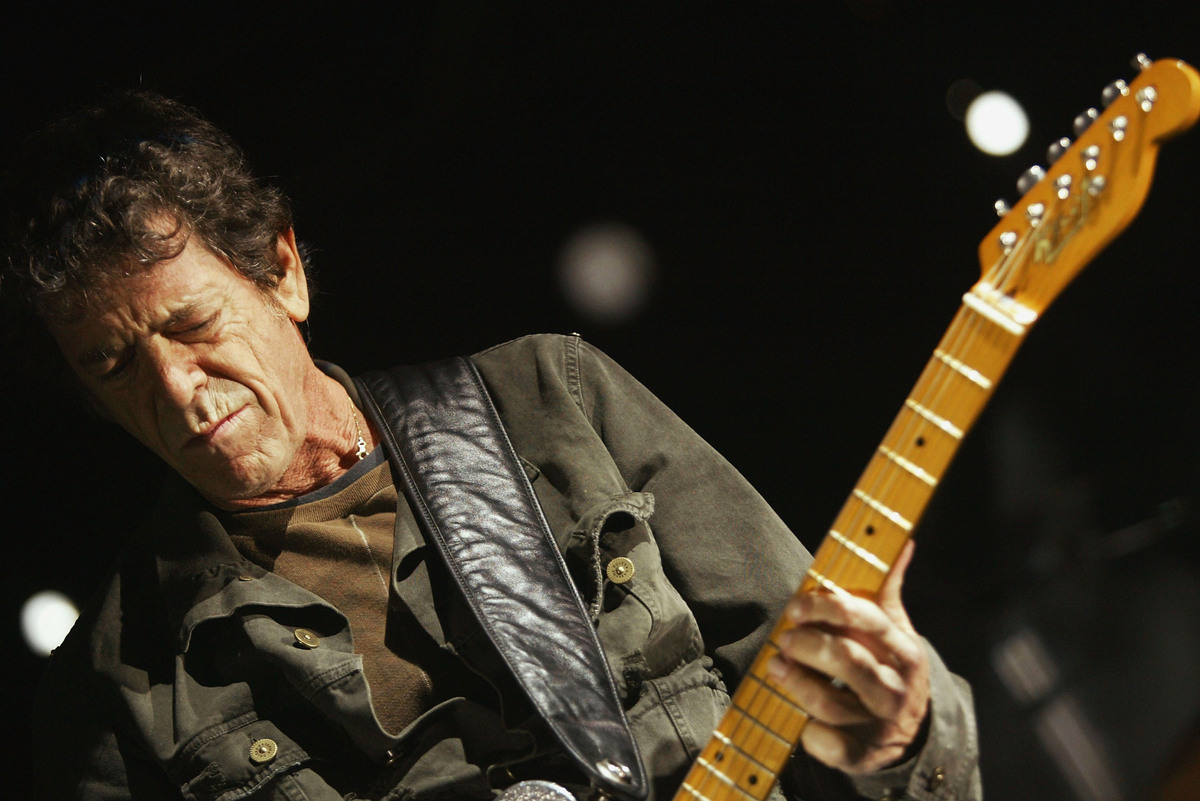 "[Lou Reed] really saw the beauty of life, and wanted to be a person who could live in that beauty as often as possible," longtime publicist Bill Bentley says.

Lou Reed, the transgressive and transcendent songwriter, singer and guitarist, died Sunday at 71 of liver disease, several months after undergoing a liver transplant. He co-founded The Velvet Underground and then embarked upon a long solo career. Fresh Air's Terry Gross interviewed him in 1996, but he walked out after just a few minutes, annoyed by the questions. But that didn't change her love of his music.

Reed was famous for his prickly, sometimes combative relationship with the press. And it was up to Bill Bentley — Reed's publicist from 1988 to 2004 — to work the very press Reed combated. Reed and Bentley became good friends, and their friendship continued for the rest of Reed's life. "In Lou Reed's world, when you were Lou's friend you knew it," Bentley tells Gross. "And I'm very lucky to count myself among those few, I think."

Before meeting Reed, Bentley played in a band with Sterling Morrison after Morrison left The Velvet Underground. Bentley produced one of Lou Reed's albums, and wrote liner notes for a couple more. He's now head of A&R at Vanguard Records. In this full hour dedicated to Reed, Fresh Air listens to his music, as well as excerpts of interviews with original Velvet Underground members John Cale and Maureen Tucker — plus Mary Woronov, who used to do the whip dance when the Velvets were part of Andy Warhol's multimedia show, The Exploding Plastic Inevitable.

"When I think of Lou Reed, the first image that comes to mind is a rock 'n' roll warrior who would stake his ground and never back down. In 1967, the rock 'n' roll world was not really ready for a band like The Velvet Underground, but more importantly, surely not ready for a song like 'Heroin,' which basically was 'a love song to a drug,' as Lou once said. And when it came out, it pretty much leveled the playing field for The Velvet Underground — there was nothing even remotely in that world. And for a lot of the rest of his life, people would always preface Lou Reed's career by saying 'the man who wrote and recorded "Heroin."'

"One of the musical things about 'Heroin' that nobody else was really doing in 1967 is that it's seven minutes long. Lou often said that that was one of the reasons that no major label would sign them. All the meetings they would have with the different representatives, it was always like, 'Well, you're going to have to cut all of your songs down to three minutes' — and, of course, Lou and the band would never do that. So it sort of put them off in the corner from the very start. Besides that, it's the kind of song that includes incredible improvisation and feedback guitars and tribal drums that rock 'n' roll players weren't doing then. It just had a completely original sound, above and beyond all of the San Francisco bands, or whatever rock bands were big at the time — especially the British Invasion bands like The Beatles and The Rolling Stones in 1967 — were not doing anything like this. It was a unique sound that set The Velvet Underground on a path that never stopped."

What Does Lou Reed's Music Mean To You?

"I think Lou really was the forefather of punk. When the Velvets started, they were just bashing away; they had no intention of playing in public. Lou had had bands before, and [John] Cale had played in experimental groups. Sterling [Morrison] had played, as he said, 'in biker bars out on Long Island,' and they just met in New York and started playing at home. They were not trying to be in the music business at all. So it started as a very elemental pursuit.

"They had a drummer named Angus MacLise that had left the band because he refused to play in a group and be told when to start and when to stop, so he quit, and that's when they got Maureen [Tucker] to play drums. And one of the genius things I think in getting Maureen, they insisted she play drums standing up; that made her approach the kit from a whole new perspective. You couldn't really get into hard backbeats if you're playing standing up. One of her favorite drummers was the African drummer Olatunji, and so she styled some of her song beats on African drums, which was way before its time back then. I think just that whole mismatch of different styles and not over-thought; that really was what punk was about, too. You get up there and do it and worry about it later. It's the inspiration and the emotional content that makes it so powerful."

On Reed's relationship with the press and Bentley's role as publicist

"Being Lou Reed's publicist was easily the most challenging thing I've ever done, but also, I must say, it was the most rewarding. Because I knew going in — I had been reading magazines since Rolling Stone and Creem and those magazines started — I kind of knew the lay of the land, so I really handled trying to set up the writers that would be speaking with Lou with real care; hopefully the ones who could figure out a way to open Lou up, which wasn't always easy.

Anything you could read about in a book, or talk about in a play, [Lou Reed] felt should be in a rock 'n' roll song. He set that out as his No. 1 goal: to change the parameters of what rock lyrics could be.

"I would always tell writers, 'Maybe for the first 15 or 20 minutes, let him guide the conversation' — which, even if it started slowly, to give Lou a little degree of comfort, because he's very, very sensitive and if he snapped [it was] that the writers were trying to take him somewhere he didn't want to go. He would shut it down. I saw him walk out of a lot of interviews, and sometimes [it would] become sparring with these people verbally — [it would] be very hard to watch. [For] a lot of the early interviews, I was told to sit in the room with him while he did them. He wanted me in the room in case it went bad, and he had signals he would give me if he felt it was going bad and I had to end the interview. It was almost like this drama that was always going on."

"I think Lou's demons were how to control the side of him that made him less than loving. I think he might've come up in an era where being different was a really bad thing, and it probably gave him either some guilt or definitely some turmoil. I know there have been reports that he received shock treatment when he was a teenager and he was given medicine to try to control [him]. I don't really know that any of that was ever true. I never talked to him about what happened when he was a teenager, but I think with Lou, he really saw the beauty of life and wanted to be a person who could live in that beauty as often as possible. And sometimes trying to find that sense of contentment might take you to drugs, might take you to drink, might take you to a lot of things that aren't that good for you.

"I think there [were] a lot of questions in [Lou's] mind of, How do you become a good person? How do you fight off the demons and the devils that take you down the other road? And that was his lifelong struggle, but I think that's also what made him such a great artist, because he never backed down from it. He acknowledged it. He wrote songs about it, like, What is that line between good and bad in a person? And where does it take you?"