Accessibility links
Black Sesame Seeds Can Be So Much More Than A Decoration In the U.S., sesame seeds seem to be used for little more than sprinkling atop rolls or loaves of bread. But in many Asian and Middle Eastern cuisines, the tiny, nutty seeds are incorporated into both savory and sweet preparations.

Black Sesame Seeds Can Be So Much More Than A Decoration

Black Sesame Seeds Can Be So Much More Than A Decoration 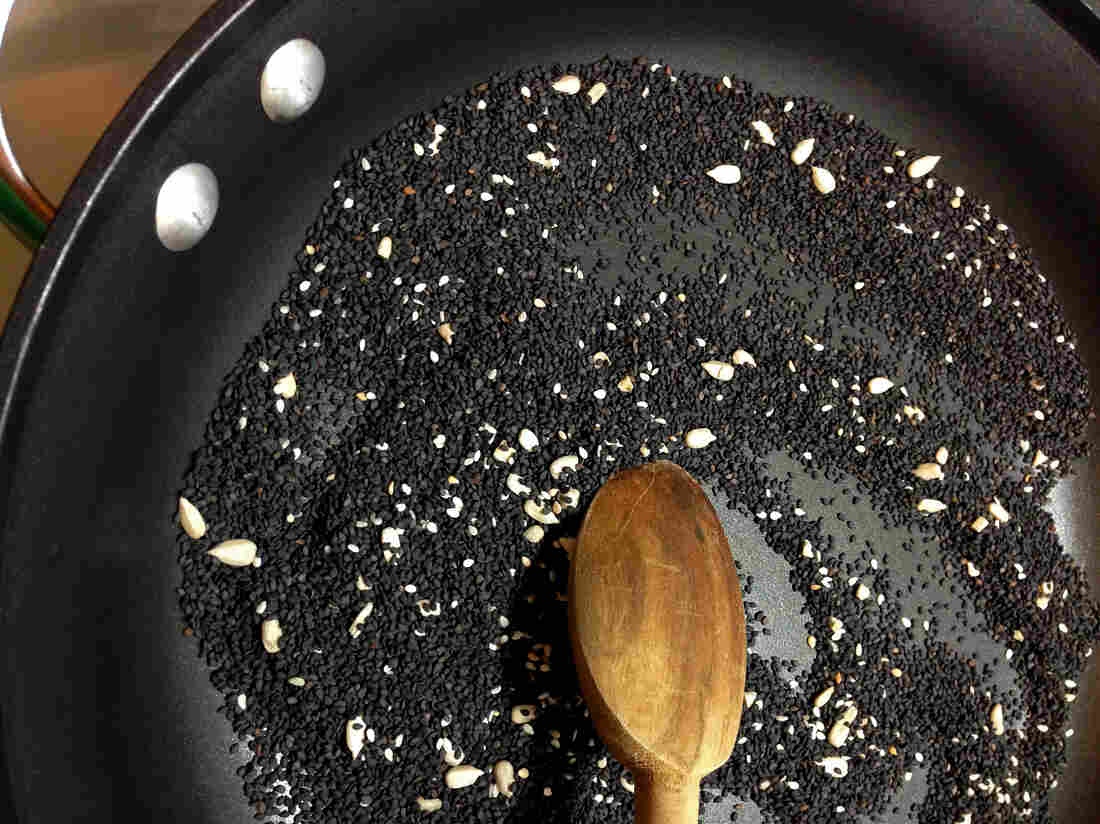 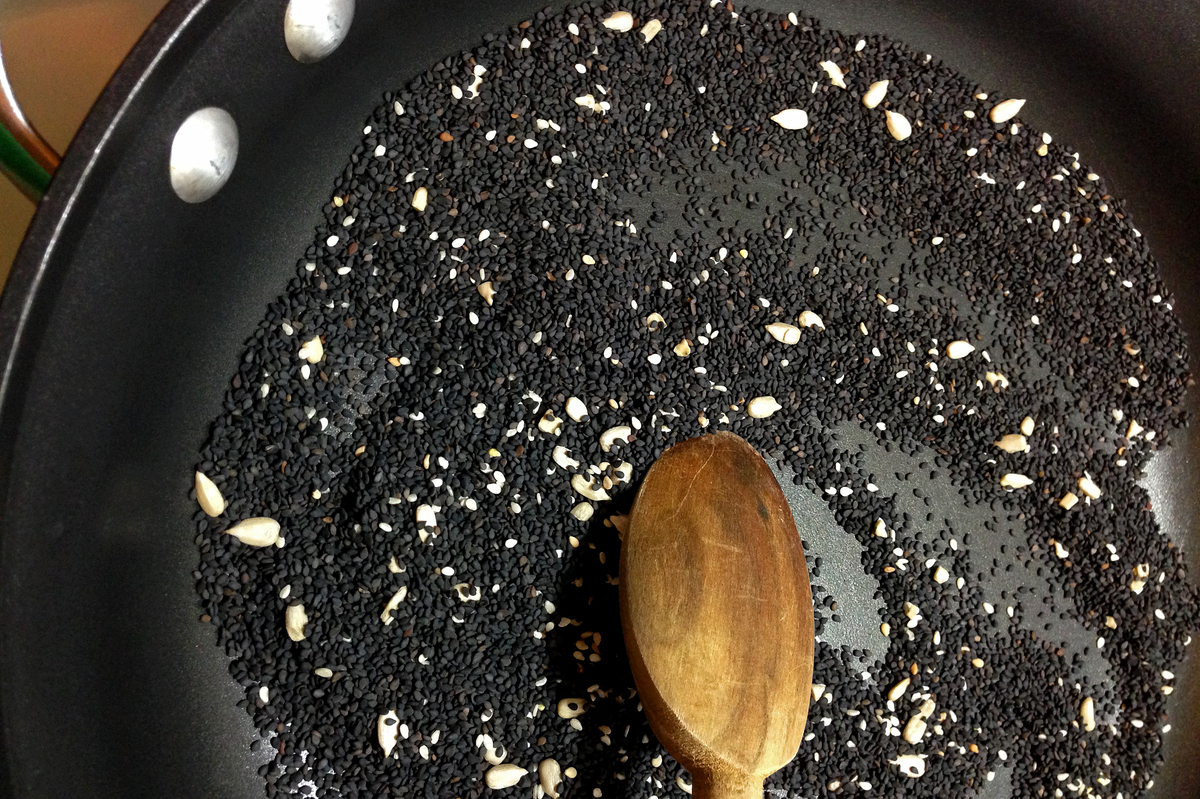 Asian and Middle Eastern cuisines have incorporated sesame seeds into both savory and sweet preparations for centuries. Yet for many Americans, sesame seeds seem to have little more use than as something to be sprinkled atop a roll or a loaf of bread.

When I was a kid, I harbored a secret love of them. I picked them off my hamburger buns, one by one, enjoying the satisfying little pop of each kernel as I bit into it. When we visited our favorite local bakery, everyone else oohed and aahed over the gooey cinnamon sticks and the jelly-filled tarts. Me? I coveted the sesame sticks, a short braid of sweetened dough drenched in icing and studded with a generous sprinkling of the seeds. I assumed I was strange since nobody else took notice of these unassuming flavor boosters.

Aside from that early introduction via the sesame sticks, finding things in the U.S. that showcased the sweet, subtly nutty flavors of sesame were few and far between. Now, American chefs are tapping into this underappreciated flavor, sometimes borrowing from other cultures and finding delicious ways to bring them to the American table.

Even better, I'm seeing dishes made with the exotic-looking black sesame seeds, which I never experienced growing up. I first started noticing these beautiful, dark jewels a few years ago when they began joining their pale brothers on rolls at fancy restaurants. Then, slowly, they were introduced in sauces and as a crust for tuna. Finally, the big one: a payload of sesame flavor served in a cup of black sesame gelato at a local gelateria. It's a flavor that's fairly common to Japanese palates, but I was thrilled to see it jump the culture barrier.

Rina Rapuano is a freelance food writer and restaurant reviewer based in Washington, D.C. She writes regularly for The Food Network's CityEats site and Capitol File magazine, and has written extensively for The Washington Post's food section and Washingtonian magazine. When she's not dragging her husband and two kids to area restaurants, she's usually in the kitchen cooking, baking or sneaking a cookie. Find Rapuano on Twitter at @rinarap.

Noah Dan, founder and CEO of Pitango Gelato in Washington, D.C., grew up in Israel and says that sesame is much more prevalent in the Middle East and Far East than it is here.

"It's much more a staple of the diet than it is around here," Dan says. "But when it's used in sweets, it's a great flavor."

Dan says the flavors depend on many things, including whether you go with white or black (or yellow or red) sesame, whether you toast it, and the quality of the supplier. For home cooks, they can often be found at Asian and Middle Eastern markets and in the bulk spices section of some specialty stores, if not the regular supermarket.

Like many people, Dan says that black sesame has a slightly nuttier flavor than its white counterpart.

"People from countries that are used to sesame feel like they're coming home," he says when asked how customers have responded to the flavor. "Everybody likes it, but some people have a real craving."

Taste, texture and tradition aren't the only reasons to incorporate sesame seeds into your diet. The seeds "are an excellent source of many essential minerals, as well as a very good source of vitamin B1 (thiamin) and dietary fiber," registered dietician Michele Turcotte writes in a LiveStrong.com article. In addition, she says they are rich in essential trace minerals copper and zinc, as well as calcium — especially the unhulled seeds. She also contends that they contain two cholesterol-lowering substances.

Whatever the reason, black sesame deserves attention. It's been waiting patiently in the American wings for decades.

As you may have guessed from the photo, kids of a certain age will likely turn their noses up at this moist, nutty cake — especially if you're kind enough to warn them that it's not chocolate. But if you do get them to try it, they might even admit that they like it. This recipe is adapted from one that ran in Bon Appetit magazine in March 2012. 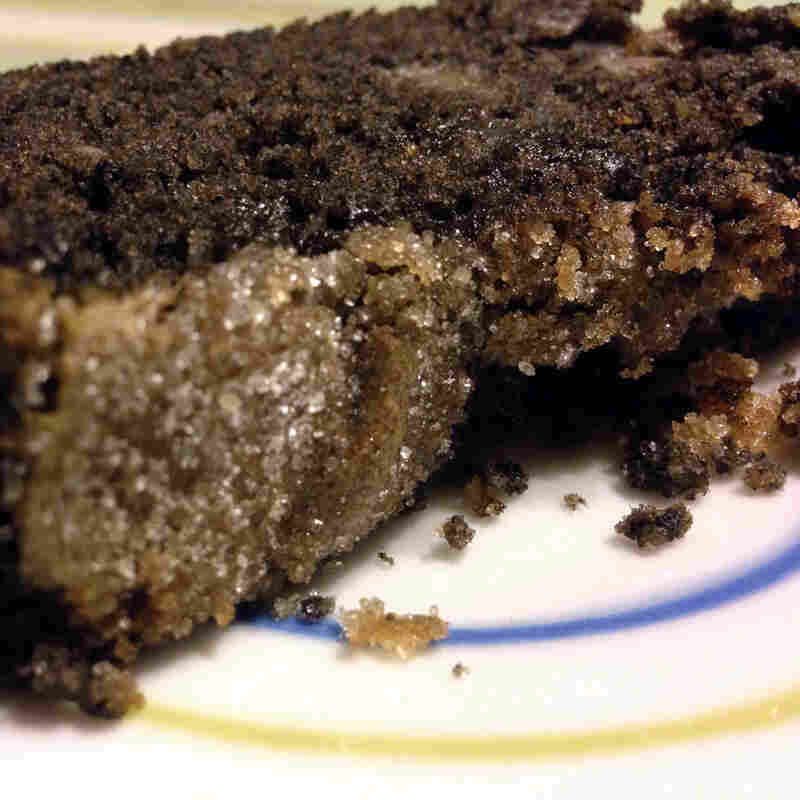 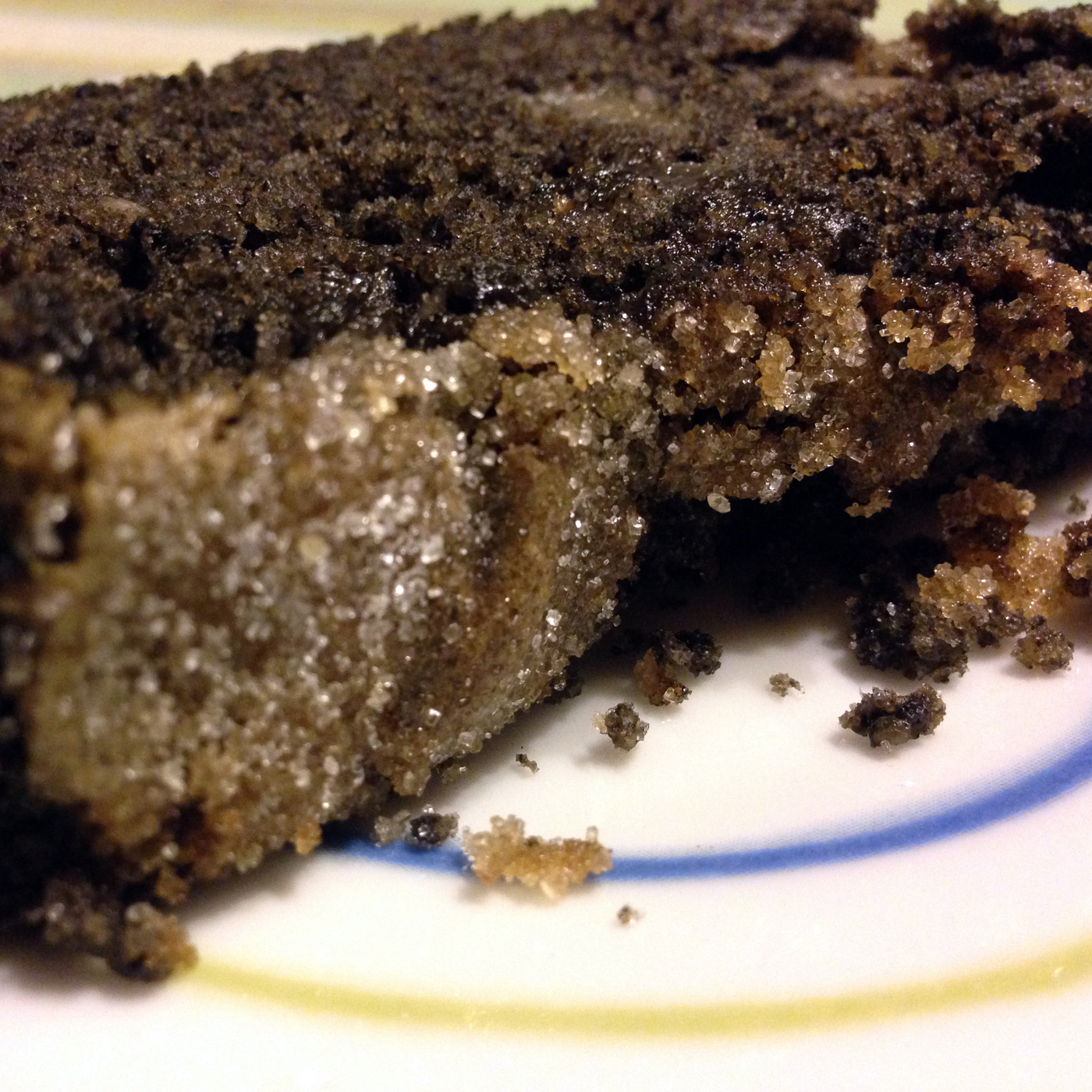 Using an electric mixer, beat 1/2 cup butter and 1 1/3 cups sugar in a large bowl until well combined, 2 to 3 minutes. Add sesame paste and beat, occasionally scraping down sides of bowl, until blended, 1 to 2 minutes. Add egg and egg yolk. Beat until paler and fluffy, 3 to 4 minutes.

On low speed, beat in flour mixture in three additions, alternating with buttermilk in two additions, beginning and ending with dry ingredients. Toss pear with remaining 2 tablespoons of flour in a small bowl; fold into batter.

Bake until a tester comes out clean when inserted into center, about 1 hour 40 minutes, although start testing at about 1 hour and 20 minutes. Let cool in the pan on a wire rack. 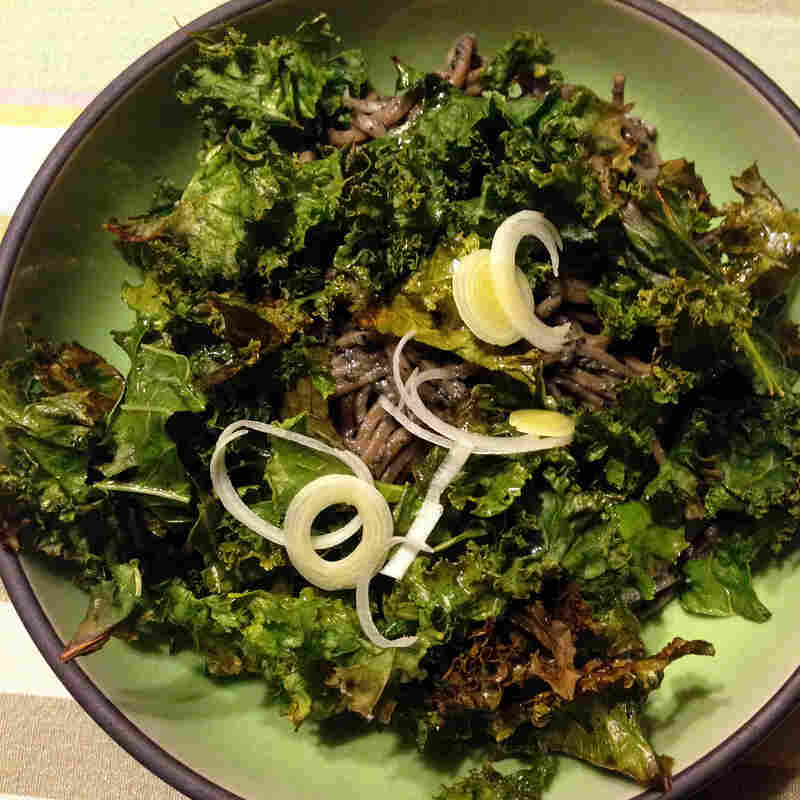 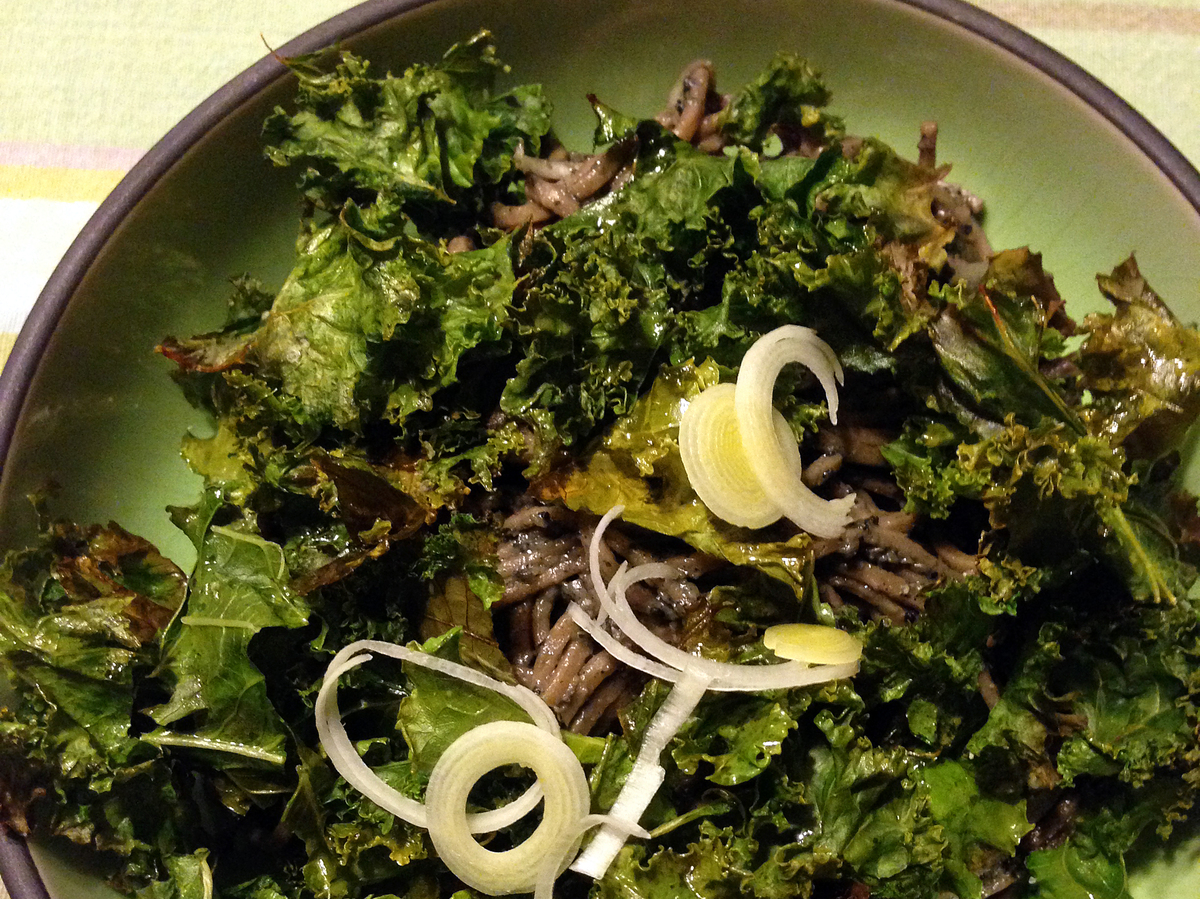 With all the sweet sesame recipes out there, I wanted to try a savory recipe that showcased the seed. I adapted this noodle dish from one posted by Leek Soup blogger Dina Avila, who adapted it from Super Natural Every Day by Heidi Swanson (Ten Speed Press, 2011). Avila says she added the crispy kale element and successfully substituted Marsala with a pinch of sugar for mirin. I used toasted sesame oil and regular rice vinegar since that's what I had on hand.

Toast the sunflower seeds and sesame seeds over medium heat in a dry pan, stirring frequently until fragrant, or about 5 minutes. Pour toasted seeds into a food processor and pulse until gritty and sand-like. Add the sugar, shoyu, mirin, sesame oil, brown rice vinegar, chili powder and red pepper flakes. Pulse until blended.

Scoop into a bowl or jar and set aside.

Bring a large pot of salted water to a boil and add soba noodles. Cook according to package directions.

Drain, reserving about 1/3 cup of the noodle water and rinse the noodles under cool water.

Add all but about 1 tablespoon of the sesame paste to the hot noodle water. Put noodles and about half of the sliced leeks in a large bowl and toss with the sesame-paste water mixture. If the paste seems clumpy, add a bit more water until it loosens into a sauce.

Serve hot with a dollop of sesame paste and a sprinkle of sliced leeks and crispy kale.

For the kale, preheat oven to 350 degrees. Toss very dry kale with about a tablespoon of sesame oil and a few pinches of sea salt. Bake for about 15 to 20 minutes until kale is crisp and its edges are just beginning to char. 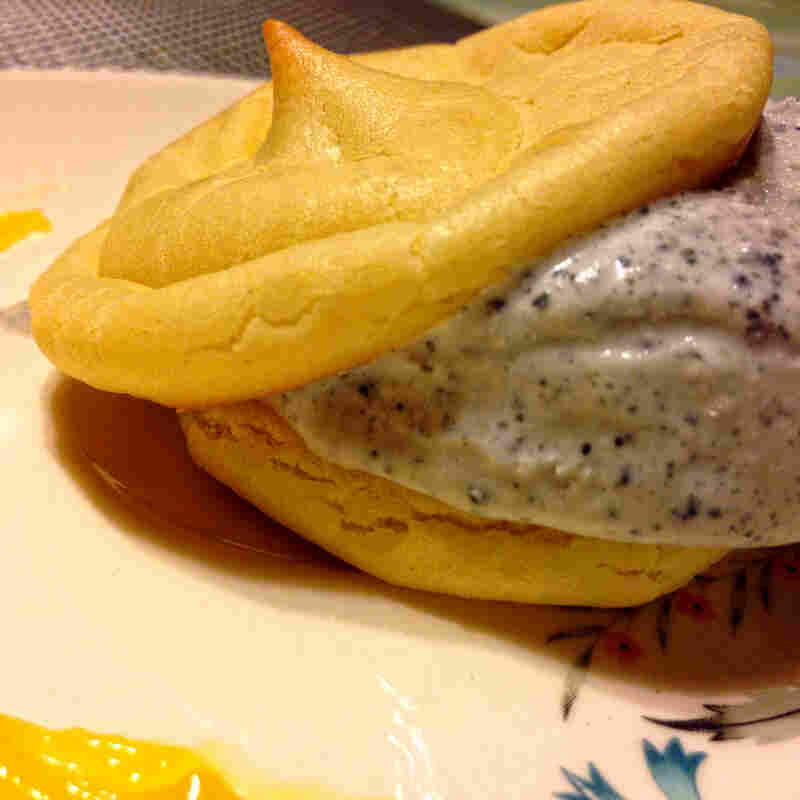 Desperate for a photo of something other than a blackish mass, I was glad to have found this beautiful and delicious recipe on a blog called Savory Sweet Living. I adapted it from blogger Margaret Chen, who cobbled it together from an ice cream recipe by Diana Kuan (from The Chinese Takeout Cookbook, Ballantine Books, 2012) and a lemon curd recipe by pastry chef and author Nick Malgieri. Yuzu is a Japanese citrus, but even Whole Foods had never heard of it. Try Amazon if you don't have an Asian market nearby, or use fresh lime or orange juice, or a combination of both. I halved the profiteroles recipe, knowing I should never eat nearly 20 ice cream sandwiches. The ice cream should be started a day ahead.

Combine 1 cup of the heavy cream, sugar and salt in a medium pot over medium-low heat. Stir until the sugar is fully dissolved. Pour the mixture into a bowl. Stir in the remaining 1 cup of heavy cream, milk and vanilla extract. Cover and chill for a least 3 hours or overnight.

When the mixture has chilled, grind the sesame seeds in a clean spice grinder. Pour the mixture into your ice cream maker, slowly pour in the ground black sesame seeds, and churn according to the manufacturer's instructions. Transfer the ice cream to a freezer-safe container, and freeze for at least 4 hours or overnight.

Combine the water, butter, sugar and salt in a medium pot and bring it to a full rolling boil, stirring occasionally. After the boil, take the pot off the heat and add all the flour, stirring until smooth. Put the pan back on low to medium heat and cook, stirring constantly until the dough dries, and pull to the side of the pot. Remove from heat and let cool.

Put the dough into a stand mixer fitted with a paddle attachment. Mix on medium speed, adding 1 egg at a time until the egg is completely absorbed before adding another egg.

Once the eggs are completely mixed in, place the dough into a piping bag and pipe 1 1/2-inch rounds onto a cookie tray lined with a silicone baking mat. Bake 15 to 20 minutes until slightly golden brown. Cool and set aside.

Combine the yuzu juice, sugar and butter in a saucepan and bring to a boil over medium heat.

In a separate bowl, whisk the egg yolks. Add a quarter of the boiling liquid to the egg yolks while whisking to temper the yolks. Return the remaining liquid to a boil over low heat. Whisk the egg mixture into the pan, and whisk until it thickens. Add the grated ginger. Continue to whisk; do not allow the curd to boil or it will scramble.

Transfer the yuzu curd into a clean bowl, pressing plastic wrap against the surface to prevent a skin from forming. Chill and set aside.

To assemble, cut the profiterole in half, sandwich it with a scoop of the black sesame ice cream, then put some yuzu curd on the plate.