Accessibility links
Adult Education: Adding Up The Cost Of Low Literacy Among Adults Adults who can't read, write or speak English well affect all of society, in a variety of ways. They contribute less to the economy, cost communities more for government benefits and health services, and are disproportionately represented in the criminal justice system.

This is the final report in a four-part series on adult education.

Low literacy rates for adults can have wide-ranging effects on those around them. They may rely more heavily on government services; their children may not get that extra hand with schoolwork; their families may not get sufficient financial support. 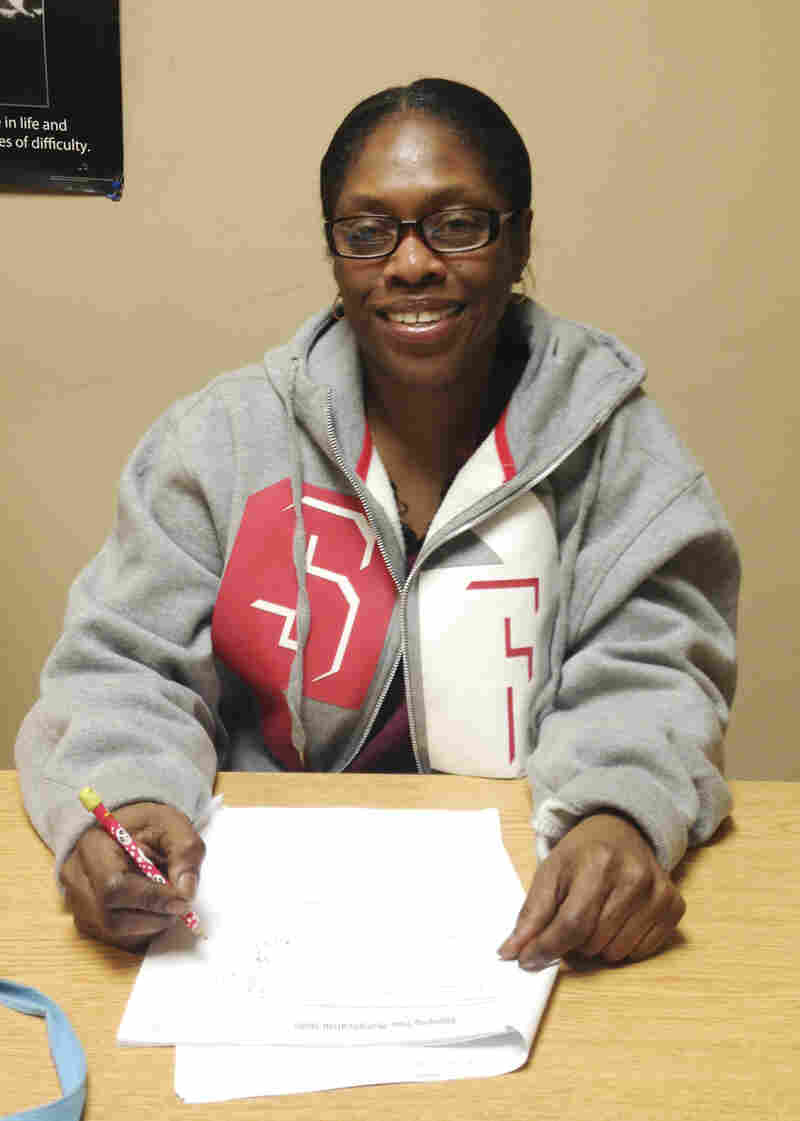 Claudine Edwards had a baby at 13 and dropped out of school. At 53, she's come to Academy of Hope in Washington, D.C., to ask about classes. Kavitha Cardoza/WAMU hide caption 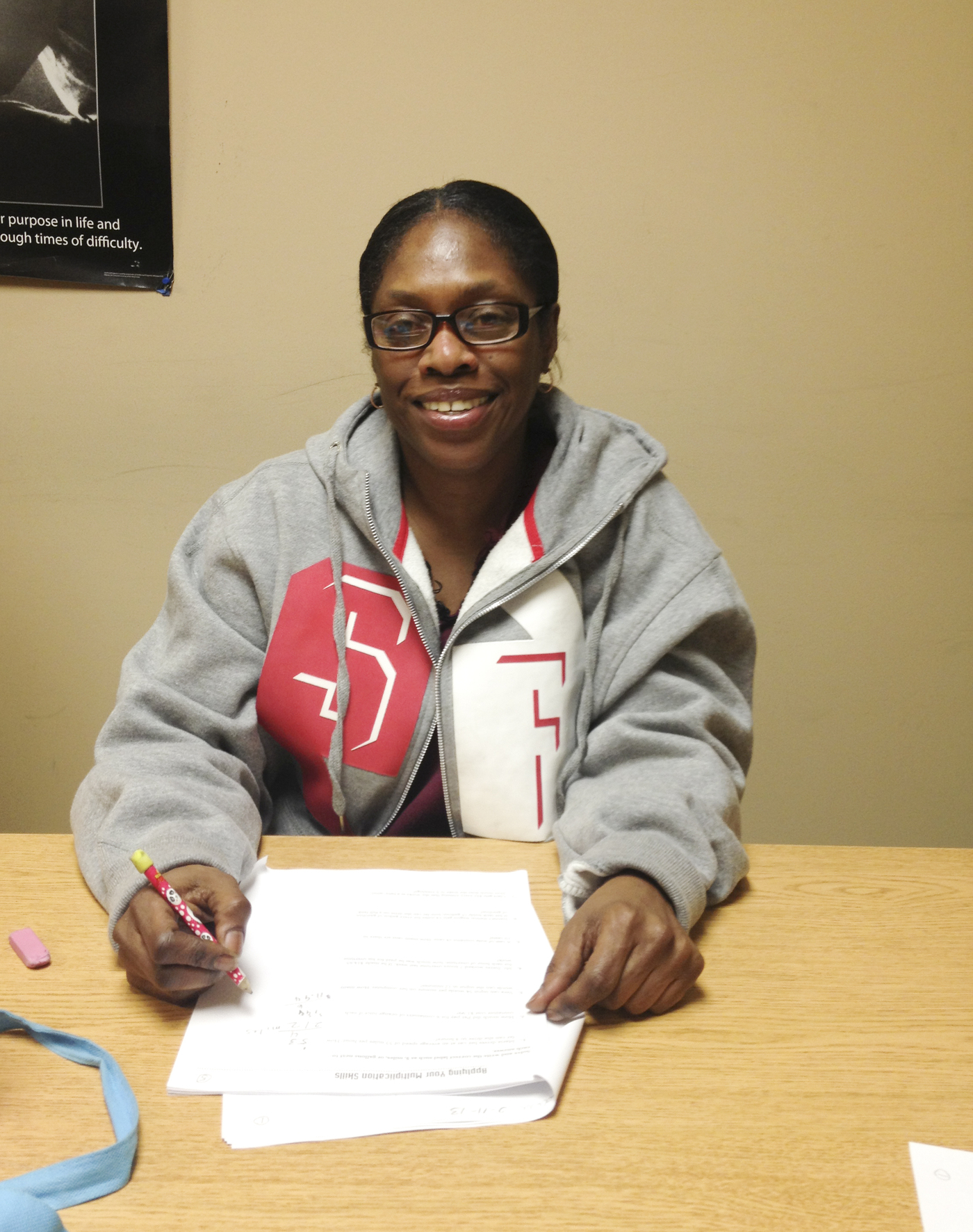 Claudine Edwards had a baby at 13 and dropped out of school. At 53, she's come to Academy of Hope in Washington, D.C., to ask about classes.

But for the millions of adults with low literacy, the ability to read, write and speak English might offer them the most important opportunity of all: a chance to emerge from the shadows and participate as equals in society.

The Consequences Of Dropping Out

Claudine Edwards had a baby at 13 and dropped out of school. She's been unemployed for five years since she lost her job as a cleaner. Edwards, now 53, relies on food stamps, and her daughter pays her rent.

She has come to Academy of Hope, a nonprofit in Washington, D.C., to ask about classes in basic reading and math.

It costs $30 a term. Edwards tenses when Cathy Walsh, a staff member, brings up money. She asks if she can bring the fee in a few days.

For Edwards and millions of others, the decision to drop out of school may have seemed easy, but the path after that is hard — a lifetime of dreams that lie just out of reach. It means a promotion lost, a business not started, a bedtime story never read.

People who struggle to read, write and speak English are sentenced to a lifetime of economic challenges, says Stephen Fuller, an economist with George Mason University in Virginia. He says it's important to have an educated workforce.

"If we fail, it's a double expense, 'cause the economy isn't healthy, and we also have increased social services," he says.

'Here And Now': Listen To The Story

"We find that about half the people that come to prison didn't finish high school," says Stephen Steurer, executive director of the advocacy group Correctional Education Association.

Research shows that inmates enrolled in education programs while incarcerated were far less likely to return to prison.

Steurer says the majority of inmates will eventually be released, so funding educational programs should be common sense.

"It's not a hard sell to tell congressmen that education reduces crime," he says. "But who wants to make a choice: Are we going to build another grade school or another prison school?"

Improving literacy rates would not only make for a safer and more prosperous country, but also a healthier one.

Alis Marachelian, who runs the health education program at Mary's Center in the district says the barrier between caregivers and patients who lack basic literacy is a "huge problem."

"We use illustrations for medicines — we would draw the sun and the moon as to when to take the medicine," she says. "Sometimes we help them put it in the pill boxes because they can't count either."

For some common conditions, such as diabetes, the least compliant patients are the ones with low literacy, Marachelian says. It's not that they resist taking medication; they don't understand that a wrong dose could be fatal.

Leslie Kronz encounters stories like these every day. Working as a training and education consultant for Inova Health System in Virginia, she says all these challenges have a price tag.

"When people come into the system, if they're not diagnosed accurately, if they don't follow what they're being asked to do, if they're readmitted because of lack of understanding, all of those things add costs," she says. "It's not simply patients' problems, it's not simply the hospital or the health system's problems. It affects every one of us."

Some researchers have estimated the cost of low health literacy is at least $100 billion each year.

Experts say if the U.S. invested in adult education, these costs to society could be reduced. Instead, they say, cuts are happening. 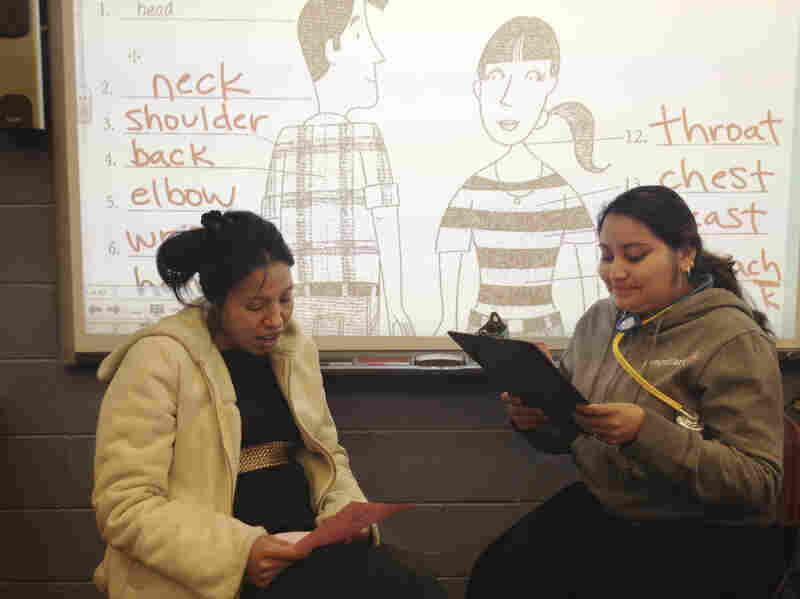 Students participate in a health literacy class at Mary's Center, role-playing a visit to the doctor. Kavitha Cardoza/WAMU hide caption 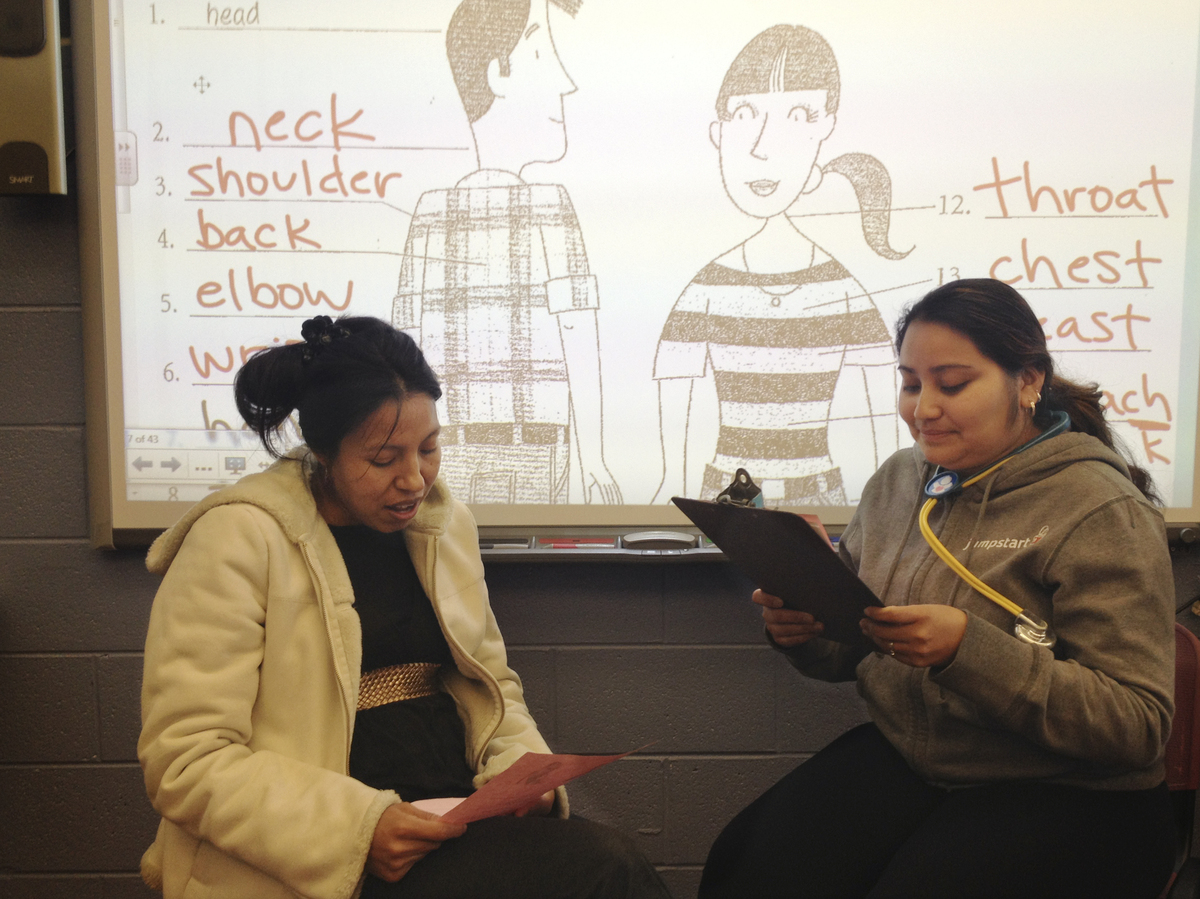 Students participate in a health literacy class at Mary's Center, role-playing a visit to the doctor.

On adult education, the U.S. spends a fraction of the funding that goes to schools and colleges. And there's been a 17 percent drop in funding since 2002. On top of that, the sequester imposed another 5 percent cut.

Focus On The Parents To Help Their Kids

For those adults who do manage to go back to school, improved literacy skills can change their lives.

Nube Guaman, from Ecuador, attends English classes at Literacy Partners, a nonprofit in New York City. She says her children didn't want to pay attention when she didn't know any English.

"If she would attend the parent-teacher conference, she would just nod her head and leave," says Guaman's 17-year-old daughter, Vilma.

Parents who are literate are more likely to be involved in their child's schoolwork. And research shows this in turn results in higher test scores, better attendance and improved graduation rates. That's exactly what happened in the Guaman family: Nube Guaman is now head of the PTA at her daughter's school.

"By focusing on parents, you can at once help cure the problem today and also prevent it long term," he says, "because as you enhance parents' skills, they will automatically transfer those skills to their children. You don't need to do anything extra." 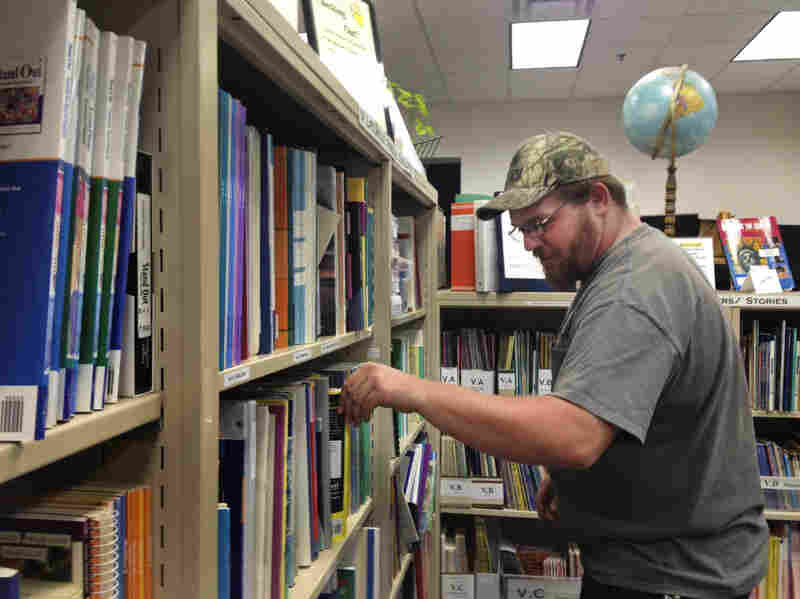 Matthew Burke graduated from high school even though he was reading at about the third-grade level. He got a job as a welder but found his lack of reading skills held him back. Kavitha Cardoza/WAMU hide caption 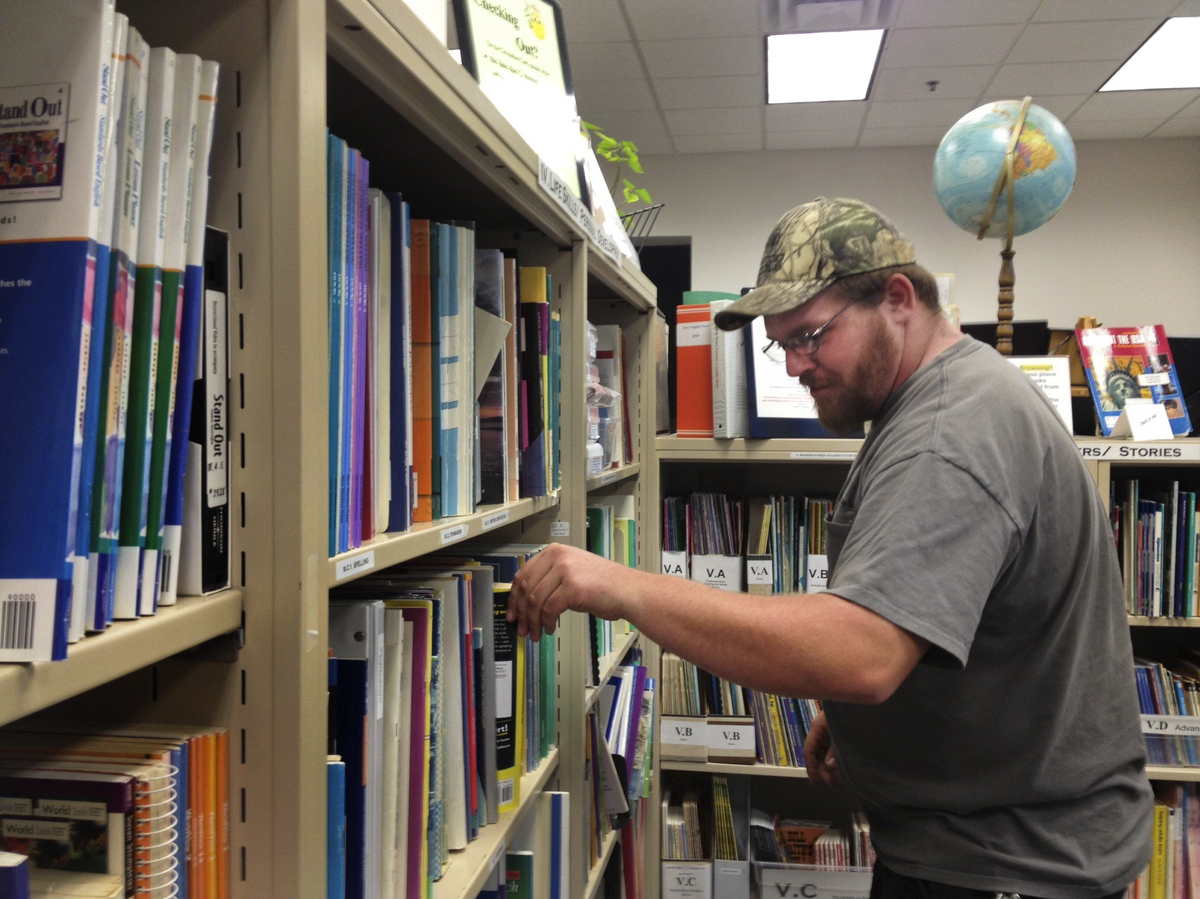 Matthew Burke graduated from high school even though he was reading at about the third-grade level. He got a job as a welder but found his lack of reading skills held him back.

Adult education can also be the difference between wasted potential and a world of possibilities.

Matthew Burke is an example. He graduated from high school even though he was reading at about the third-grade level. He got a job as a welder but found his lack of reading skills held him back.

"We'd leave notes on the board, you know: Boom tracker broke down; didn't have time to fix; this is a problem," he says.

"If there wasn't someone around to ask what it was, then I went on to the next note, or I'd put it off when I probably should've taken care of that one because that was priority," he says.

Since learning to read, Burke says, his life has changed. He no longer avoids looking at equipment manuals, and now he's enrolled in a community college blueprint class. When he completes that in a few months, Burke says his salary will increase 20 percent, and he'll have other job opportunities.

But best of all, he says, he feels much better about his life.

"It makes looking at the future of having a family less stressful because I have a skill set," he says, "and I have a knowledge of something that I can support my family off of. And that's the biggest thing."