Accessibility links
For A New Kind Of Commute, Some Eye The Sky If you commute to work, chances are you travel on roads or rails. A designer in Austin, Texas, wonders, "Why not up in the air?" In a nod to orangutans at the National Zoo who get around on wires 50 feet above the ground, designers see the potential for aerial mass transit. 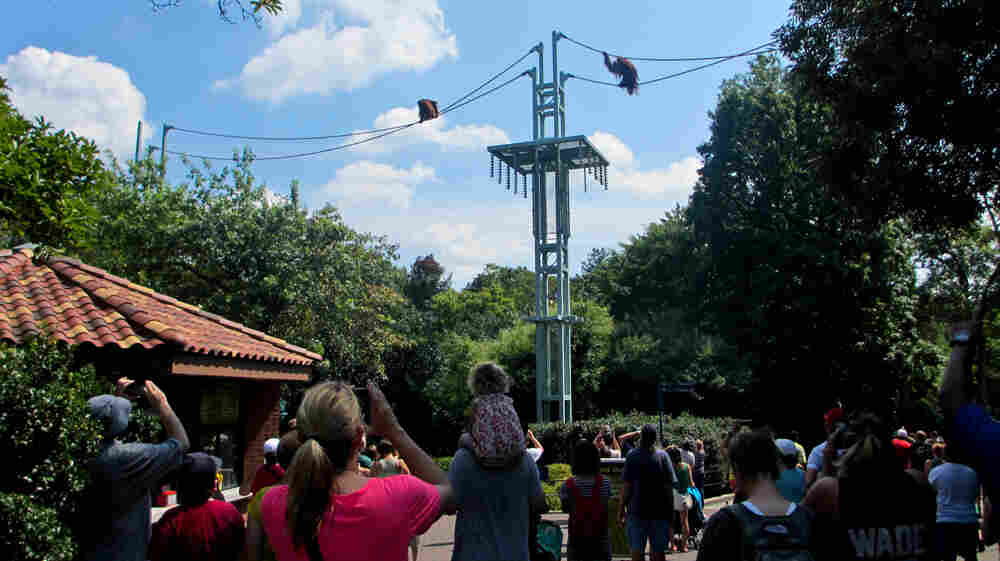 Orangutans travel via the O Line to the delight of human visitors at the Smithsonian's National Zoo in Washington, D.C. Cindy Carpien/NPR hide caption 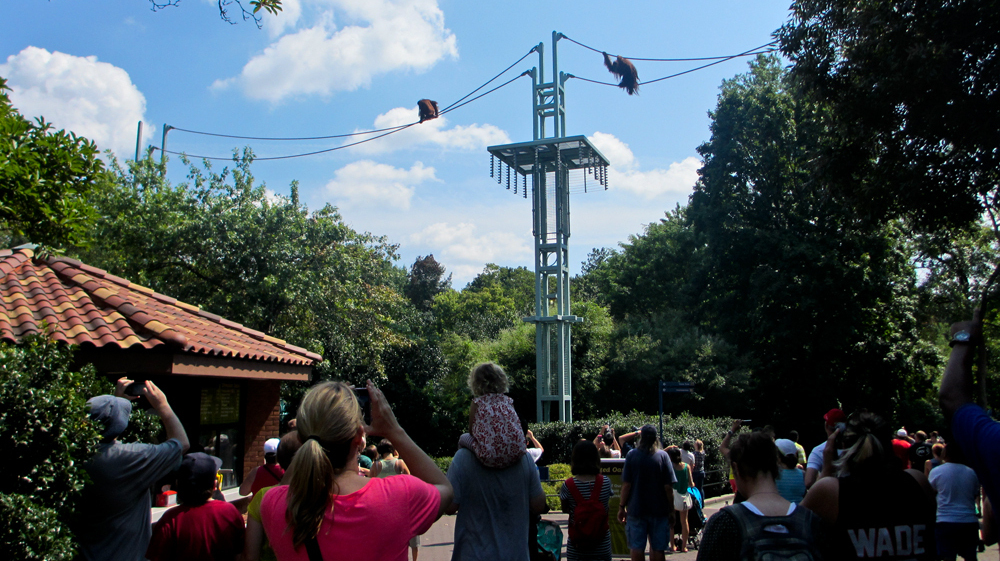 Orangutans travel via the O Line to the delight of human visitors at the Smithsonian's National Zoo in Washington, D.C.

This story is part of a series on commuting in America.

Orangutans Kiko, Iris and Batang have a short commute — only about 500 feet between the buildings at the National Zoo where they sleep and pass their days. But it's a tricky trip.

They travel 50 feet above the ground on what's called the Orangutan Transit System — the O Line, for short. It's a series of eight towers connected by red cables, and helps Kiko and his fellow orangutans get from the Great Ape House to another building, constructed about 20 years ago, called the Think Tank.

"We knew the new exhibit was going to have orangs in it, and we wanted them to be able to go back and forth and not just be stuck in one area," says Laurie Thompson, a biologist at the National Zoo. 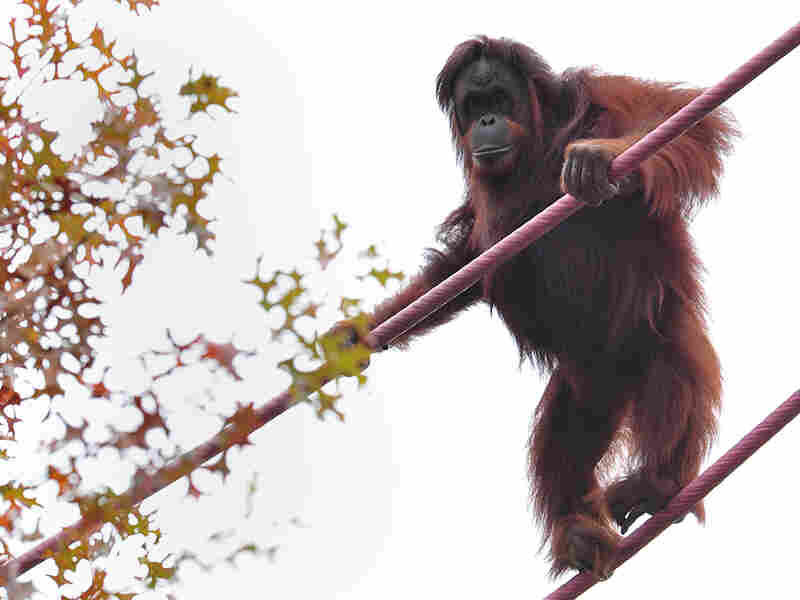 Orangutans can get exercise and look down their noses at zoo visitors, thanks to cables that stretch from one side of the primate habitat to the other. Karen Bleier/AFP/Getty Images hide caption 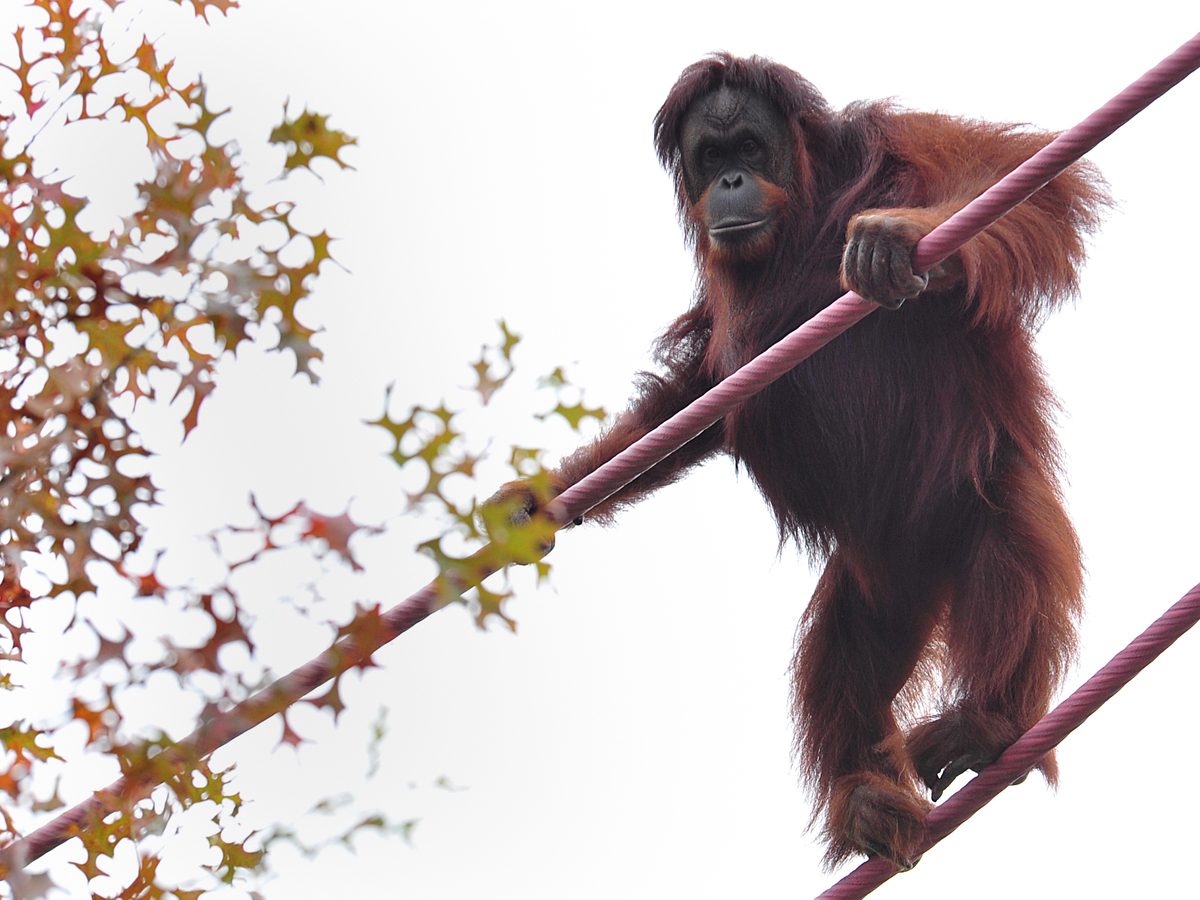 Orangutans can get exercise and look down their noses at zoo visitors, thanks to cables that stretch from one side of the primate habitat to the other.

So the zoo decided to gamble that the orangutans would be willing to swing or shimmy their way along cables, strung high above the heads of human visitors. (In case you're wondering, electric wires on the towers keep the animals from clambering down mid-commute. Like human commuters, the strolling orangutans are creatures of habit, Thompson says, so they generally don't even try to deviate from their routines.)

Most mornings, Thompson or another keeper opens the door from one building to let the orangutans out so they can travel via the O Line. Some days they'll scoot back and forth five times, some days just once. "You never know," Thompson says. "It's totally up to them."

Michael McDaniel, at Frog Design in Austin, Texas, says we human commuters have something to learn from Kiko and the gang.

"Something as simple as a wire to connect two points, just like the National Zoo is doing, makes a whole lot of sense because you're not paying to build all that infrastructure between two points," McDaniel says.

McDaniel's dream is that Austin will make a human version of this system — which he calls The Wire. Think ski lifts.

"But we don't mean chair lifts, by any means," McDaniel says. "There would be way too many dropped iPhones." Instead he envisions "high-speed, detachable gondolas."

Each gondola would carry up to eight people and would be able to hop off the cable for loading and unloading. McDaniel says a system based on overhead wire would cost far less than more traditional streetcars. And the system he imagines could carry 3,000 people per hour in each direction. He's now trying to convince his fellow Austin residents to take the idea seriously.

"They generally think it's hysterical and laugh," McDaniel says. "Then as you starting talking more about it, they go, 'Oh, that would be a pleasant experience. Now is it practical?' And then you go into the numbers, and they realize this actually is a valid solution."

Medellin, Colombia, has three gondola lines, he says. So, why not American cities?