Accessibility links
Adult Education: For Adults, Finally Learning To Read Uncovers A New World Millions of adults struggle every day with basic tasks, like reading a bill or a bus schedule. Those with limited literacy find all kinds of ways to hide their rudimentary schooling. Many are unemployed. And those who have jobs are usually stuck at the lowest rungs of the economic ladder.

This is the first report of a four-part series on adult education.

The national debate around education usually focuses on children in school. But there are 30 million adults in the U.S. who have trouble with basic literacy — they struggle to read a menu, a pay stub or a bus schedule.

It also means it's difficult for them to get and hold onto the most basic jobs.

Tens of thousands of other adult learners are slowly and painstakingly trying to fill in the gaps of their rudimentary schooling. The long shadow of their unfinished education still follows them every day.

Learning Which Route To Take 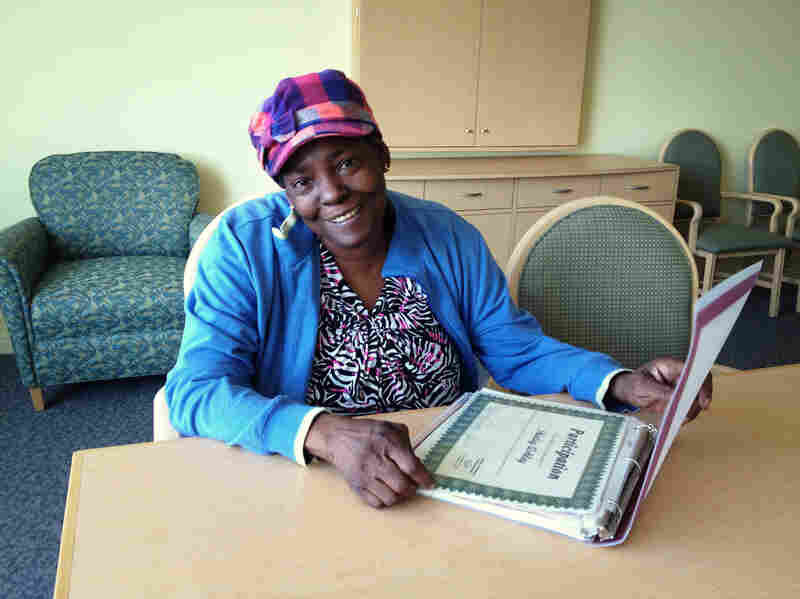 Shirley Ashley, 55, never learned how to read. With classes, she is finally able to read her own bills. Kavitha Cardoza/WAMU hide caption 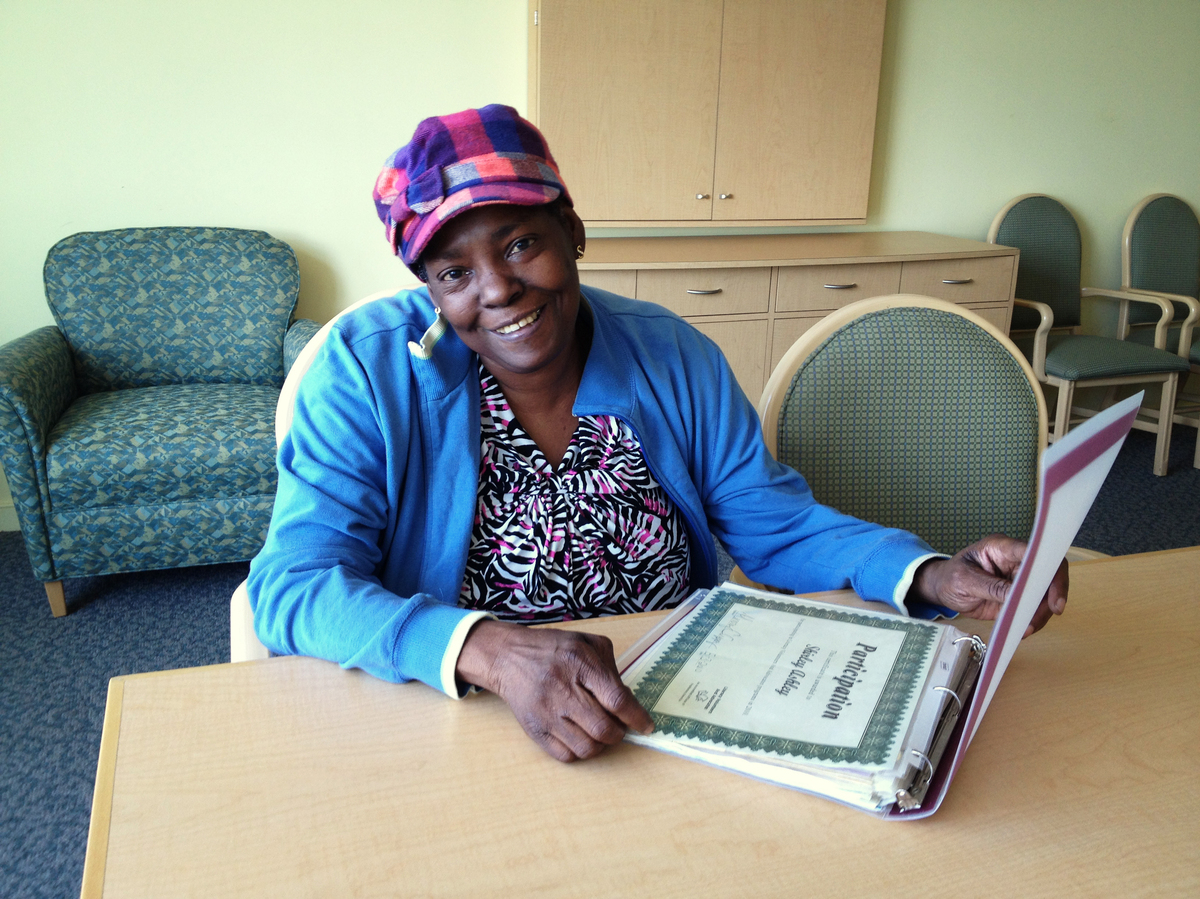 Shirley Ashley, 55, never learned how to read. With classes, she is finally able to read her own bills.

Shirley Ashley flips through a folder of certificates she's received in her adult education class. She stops at one that says "Top Performer," points to the words and starts reading.

"I know this is 'top' something; that means I'm doing good," she says.

The word "performer" is still a jumble of letters because Ashley, at 55, never learned how to read. In school she was always in classes for students with learning disabilities, but Ashley says she wasn't learning anything.

"I felt as though they just passed me just to get me out of school," she says.

In the seventh grade, after one teacher told her, "Whether you learn to read or not, I still get paid," Ashley decided to drop out.

She learned how to give her mother medicine based on the colors of the bottles. To hide the fact she was illiterate, Ashley memorized Bible verses so no one at her church suspected. And she limited her travel to a familiar route.

Ashley's inability to read has made it hard to find a job. She's also seen those closest to her take advantage of her illiteracy, especially when it came to money.

Ashley has attended classes at a nonprofit literacy center in Washington, D.C., on and off for about eight years. She initially tested at the kindergarten level; she's now reading at the second-grade level.

"When my gas bill come to my house I'm learning how to read where it says 'pay by July 17th.' That makes me feel awesome," she says.

Getting To The Next Level

Ashley is at the "low end" of the literacy spectrum. Jason White, another adult learner, is a little further along. 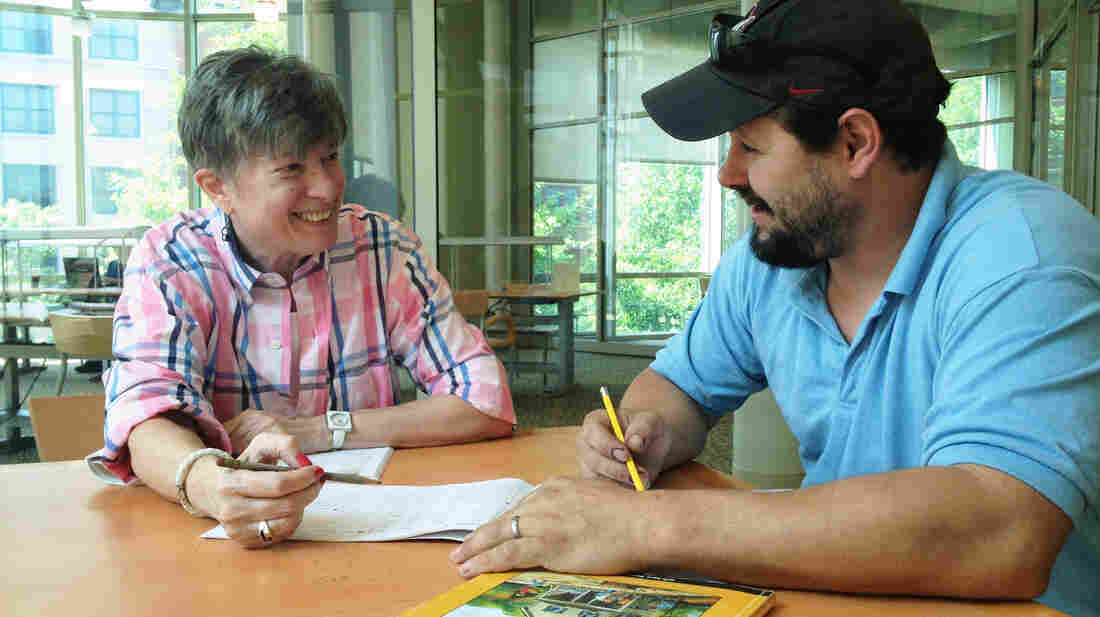 Marilyn Block tutors Jason White at a local library during a one-on-one session that is part of the Literacy Council of Montgomery County, in Maryland. Kavitha Cardoza/WAMU hide caption

White is 35 and grew up in Louisiana. He dropped out in the 11th grade after years of sitting idle in a special education class. White found ways to cover up his reading struggles, from pretending he's forgotten his reading glasses to relying on a computer's "auto-complete" function — even when he was out with friends.

He works as a construction worker, and in a sense he's lucky. Adults who dropped out of school are more than twice as likely to be unemployed as high school graduates. For those who do get hired, it often means low-end jobs with no hope of advancing. In tough times, they're often the first ones laid off.

For White, not being able to read means his career has stalled. To advance, he needs a contractor's license, and he hopes he'll be able to pass the exam next month.

"I'm very handy, and we do terrific work, but I'm technically not a contractor until I pass that exam," he says. "So it's, it's a little nerve-wracking, you know?"

White has spent the past two years learning to read with a tutor. Now, he can write his own checks and has just finished reading his first novel. He marvels that he can now read street signs.

"If we're driving somewhere, I can't help but read every sign we pass," he says. "It's like a different world."