Accessibility links
Art Or Act? New Yorkers Give Banksy Residency Mixed Reviews As part of a monthlong, outdoor exhibition, the secretive British street artist has been placing graffiti-inspired paintings and installations all around New York. Now that the month is almost over, NPR's Joel Rose asks fans and critics to assess Banksy's work. 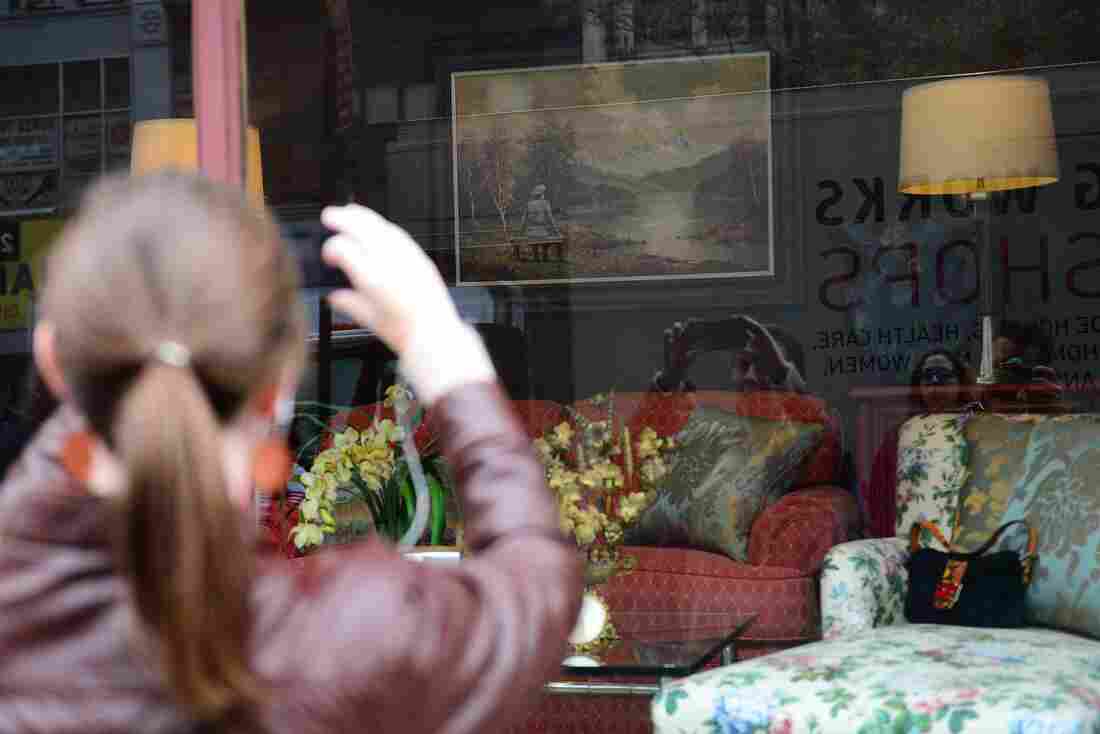 Crowds gather in front of Banksy's The Banality of the Banality of Evil, on display at the Housing Works Gramercy thrift shop in New York. Emmanuel Dunand/AFP/Getty Images hide caption

All through October, the secretive British street artist known as Banksy has been placing graffiti-inspired paintings and installations on the streets of New York City in an outdoor exhibition called "Better Out Than In." Now that the month is almost over, we asked fans and critics for their reviews of Banksy's New York residency. 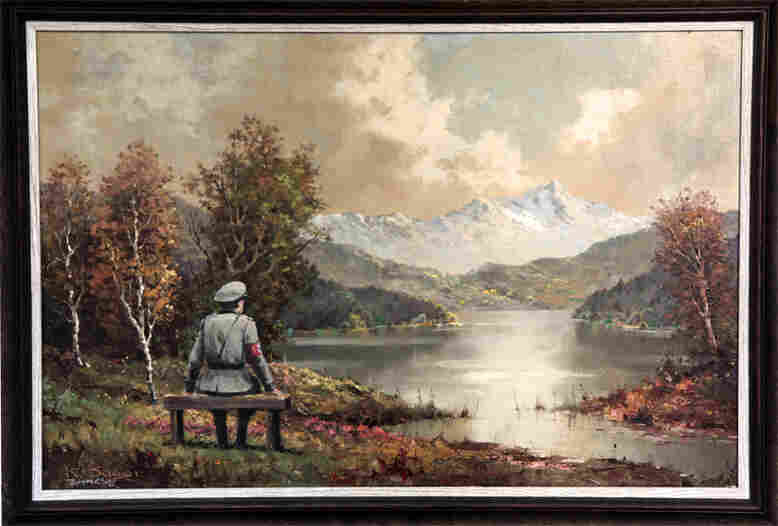 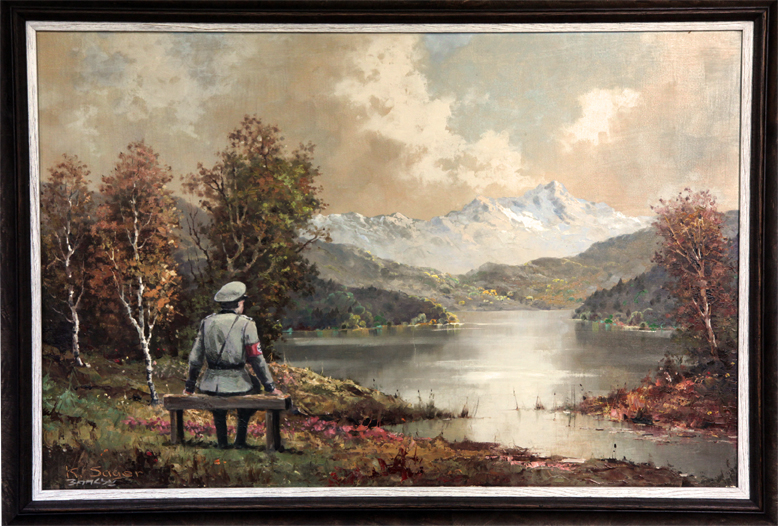 "I really love the art. But I love the fact that he's using an entire city as his canvas," says Kevin Sieg. He's one of dozens of people with cameras and cellphones who've crowded in front of the window of a thrift store on 23rd Street in Manhattan. They're here for a glimpse of a Banksy painting called The Banality of the Banality of Evil. It would be an unremarkable landscape painting of a mountain lake — except that Banksy has added a man in a Nazi uniform in the foreground, admiring the view. Banksy bought the painting from the nonprofit Housing Works, then donated the modified version back to the organization, which will auction it off to raise money. (At last check, the highest bid was more than $300,000.)

Some of his other new works were destroyed almost as quickly as they appeared, tagged over by local graffiti artists who seem to resent Banksy's intrusion on their turf. And they're not the only ones who wish he'd go back to the U.K.

"Banksy is a great promo man; Banksy is not an artist; Banksy is an act," says Jerry Saltz, the art critic at New York Magazine. Saltz gives Banksy credit for making images that stand out from the average graffiti because they're well-executed. But he says the artist isn't as deep as his fans like to think.

"He's completely conventional, anarchy lite," says Saltz. "His images are especially uninteresting. I mean a dog peeing on a fire hydrant? Meh. A balloon on a wall? Meh. I mean, it's pretty pointed political messages, but all so obvious. So obvious."

Getting 'Banksied' Comes With A Price — And Maybe A Paycheck

Banksy's Latest Work Takes On The Meat Industry ... With Puppets

Still, Banksy defenders say his words and images are only part of the point. They say the context matters, too.

"He brings art to the streets in a way that very few artists do," says Will Ellsworth-Jones, the author of a book about Banksy called Banksy: The Man Behind the Wall. "People stop who don't go into galleries, who don't go into museums, and they look at Banksy."

Ellsworth-Jones says the artist's New York residency shows that his range has grown to include video and performance-based pieces. His favorite was a stall in Central Park where an anonymous salesman sold real, signed Banksy paintings for $60.

"And virtually no one bought them. People couldn't believe that it was a Banksy," he says. "That's a wonderful commentary on money and art, and the fact that you need dealers around you and the confidence to think that a Banksy is worth $60,000, when you could've bought one for $60."

Banksy's residency had its low points, too — like the op-ed article he wrote about the design of 1 World Trade Center, the skyscraper built to replace the twin towers. It looks, in Banksy's words, like "104 floors of compromise" and "something they would build in Canada."

That did not sit well with many New Yorkers. "Excuse me, we don't like the building either," says critic Jerry Saltz. "But that building is tall. And this is New York; we need a tall building there. Who cares if it's ugly."

Banksy's fans seem willing to forgive him for that stumble. And they'll follow him to wherever the last piece of the residency appears on Thursday.