Accessibility links
Federal Court To Weigh Ohio's Execution Drug Cocktail Ohio could be the first state in the nation to use a combination of two drugs that have never been used before to put an inmate to death. This execution cocktail is the latest chapter in what's become a troubled history of capital punishment in the state.

In Ohio on Friday, a hearing in federal court could decide whether that state will become the first to use a particular cocktail of deadly drugs to execute an inmate. It's the latest chapter in what's become a troubled history of capital punishment in that state.

While Texas is far and away the busiest state in the nation for executions, Ohio is just seven spots behind it. It has carried out 52 executions since 1999 and three so far this year, with another one scheduled in two weeks. And that one, the execution of Ronald Phillips, could use a new drug cocktail. 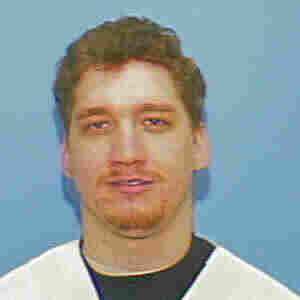 Ronald Phillips, convicted of the rape and murder of a 3-year-old girl, is scheduled to be executed Nov. 14. A court hearing may decide whether the new drug cocktail can be used. Ohio Department of Rehabilitations and Corrections hide caption

"The reason they went to use these drugs is, essentially, they're running out of options," says Andrew Welsh-Huggins, an Associated Press reporter who's written a book about capital punishment in Ohio.

Welsh-Huggins says the state has run out of its primary execution drug, pentobarbital, which has been getting scarce in the states that use it because its Danish manufacturer won't sell it for use in executions.

Mike Brickner with the American Civil Liberties Union of Ohio says this is the third time in five years that Ohio has changed to an untested lethal injection method.

"We really don't know what the effect of using this drug cocktail will be, and that's the really scary thing," he says. "What we are proposing is basically experimenting on human beings."

Ohio proposes using the opiate hydromorphone, which has never been used in a lethal injection anywhere before, and the sedative midazolam, which was used along with two other drugs in an execution two weeks ago in Florida. Attorneys for several death row prisoners in Florida filed a lawsuit this week challenging the use of midazolam in future executions.

Lawsuits and some botched executions forced the Ohio Department of Rehabilitation and Corrections to come up with a Plan B for putting inmates to death. A 2006 execution took nearly 90 minutes, with the inmate raising his head at one point to say that the drugs weren't working. And in September 2009, an inmate who's still on death row essentially survived his own execution after prison officials failed to find a usable vein for the lethal injection.

The drugs Ohio now wants to use are the ones it selected for its alternative execution plan, which allows for injection into a muscle when no vein can be found. That plan has never been put into action.

"They've had these backup drugs available just in case they couldn't find a vein," says Richard Dieter, executive director of the anti-capital punishment Death Penalty Information Center. "Now they're using the backup procedures because they can't find the drug pentobarbital. So it's sort of coming in through the back door."

They ought to just bring back the firing squad — I don't care. If they're going to have a death penalty in Ohio, they should carry it out. And if you don't want it, get rid of it. That's fine with me.

Capital punishment supporters here say it's important to come up with a permanent execution method. Hamilton County Prosecutor Joe Deters, who has sought the death penalty in 120 cases during his seven years in that office in Cincinnati, believes the law protects public safety because it makes sure that the "worst of the worst" will never be rereleased into society.

But he says there needs to be an execution protocol that can stand up in court for the law to be effective.

"They ought to just bring back the firing squad — I don't care. If they're going to have a death penalty in Ohio, they should carry it out," Deters says. "And if you don't want it, get rid of it. That's fine with me."

The hearing in federal court tomorrow will feature unusual testimony — from the inmate himself, who will be speaking to the courtroom by video. There are currently 139 inmates on Ohio's death row, so even if the federal judge strikes down this new method of execution, the state is likely to come up with another alternative.