Accessibility links
Protesters Call For Justice In Brutal Gang Rape In Kenya The gang rape of a 16-year-old schoolgirl has sparked outrage in the country and beyond. The attack was so violent it left the girl in a wheelchair. She identified several of her attackers, whom police captured but then released after their punishment: mowing the police station lawn. 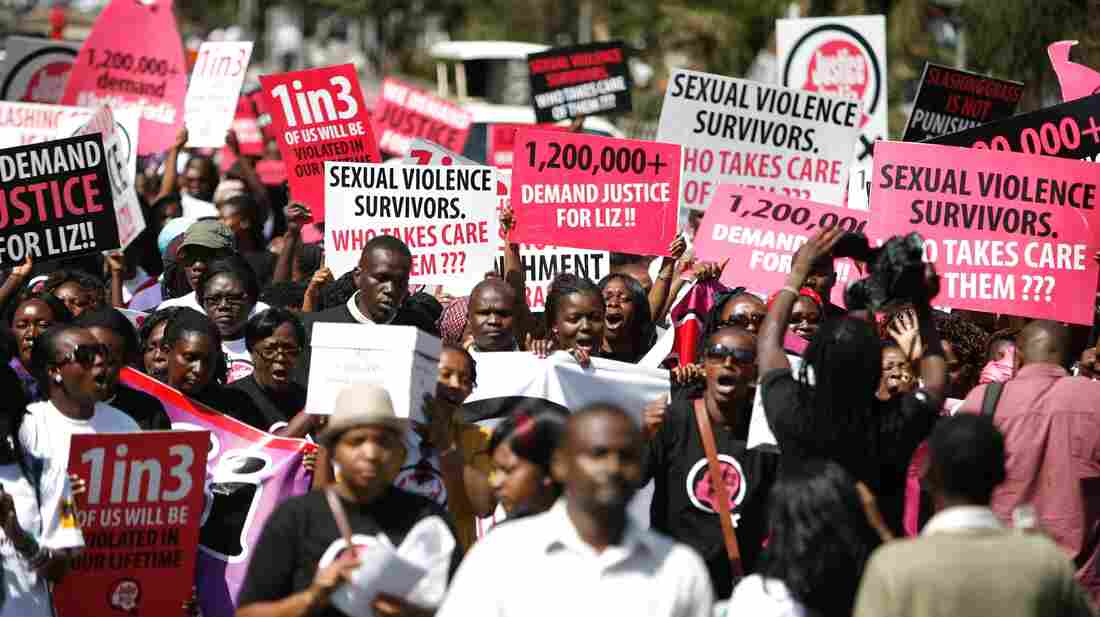 Hundreds take to the streets in Nairobi on Thursday, calling for justice for a 16-year-old girl dubbed "Liz," who was gang raped in rural Kenya. The men were caught by the police and let go after their punishment — cutting the grass at the police station. Daniel Irungu/EPA/Landov hide caption 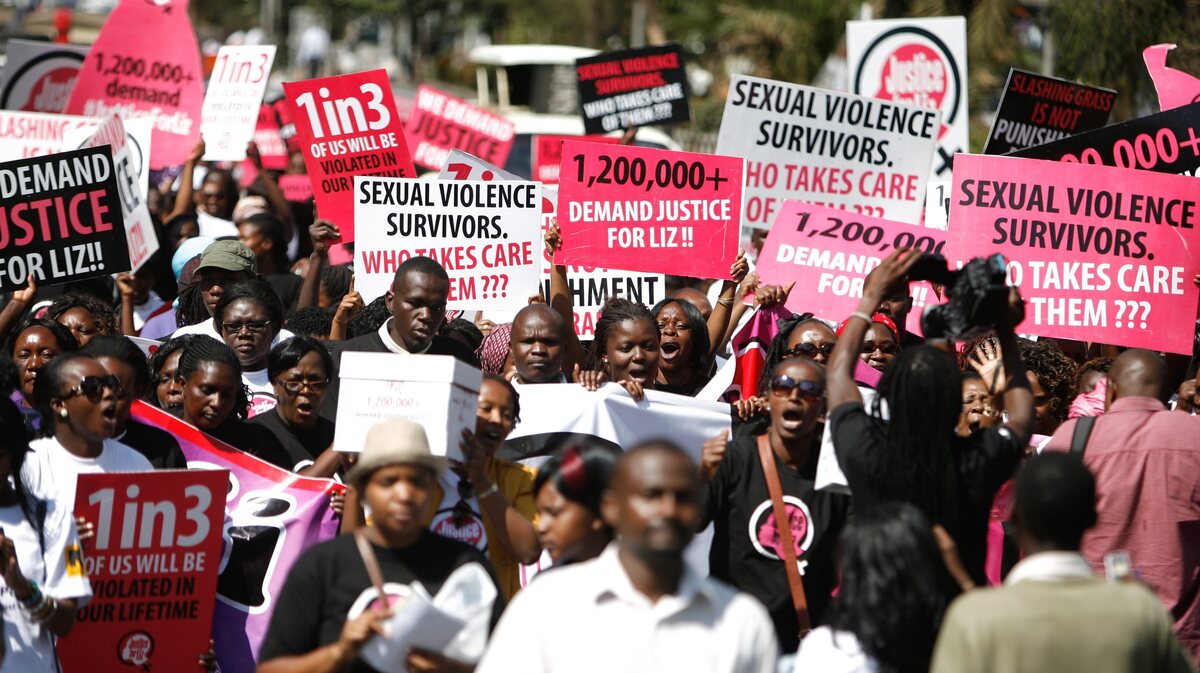 Hundreds take to the streets in Nairobi on Thursday, calling for justice for a 16-year-old girl dubbed "Liz," who was gang raped in rural Kenya. The men were caught by the police and let go after their punishment — cutting the grass at the police station.

The gang rape of a 16-year-old Kenyan schoolgirl — and the lack of punishment given to the alleged rapists — has sparked outrage in the country and beyond.

The attack was so violent it left the girl in a wheelchair with a severe back injury. She identified some of her attackers, who police apprehended — only to let go after they were ordered to cut the lawn at the police station.

Several hundred marchers stopped traffic on Nairobi's Central Kenyatta Street on Thursday morning, carrying cardboard boxes representing the more than 1.2 million online signatures on a petition called "Justice for Liz." Liz is a pseudonym for the victim, who lives in Busia County.

Ngozi Nwosu, an activist from Nigeria joining the march, says she was struck by how many Kenyan men were marching.

"There are men joining women to speak against rape," she says. "In Nigeria, women are most likely [to] stand alone. Kenya is doing well in terms of standing up against injustice."

In Kenya, where most rapes go unnoticed and unreported, this case has struck a chord.

"I think everything about this case was so outrageous," says Nebila Abdulmelik, who wrote the petition, calling for the rapists to be arrested and the police officers disciplined.

'Emboldens Others To Also Rape'

On June 24, Liz was walking home from her grandfather's funeral, when she was ambushed by six men, one age 17, the others 18.

She was beaten, gang raped and dumped in a pit latrine. But when she identified three of her attackers to the police, their only punishment was to cut grass around the police station.

That, says Abdulmelik, "emboldens others to also rape."

The case lay idle for months. Liz's mother had to lease the family farm to afford the hospital. Then a newspaper reporter picked up the story; the activism that followed showcased a Kenya that is increasingly wired and middle class. Kenyans used Twitter and Facebook to bring media attention to the case. Ordinary Kenyans donated thousands of dollars through mobile money-transfer campaigns to pay for Liz's care.

Doctors say Liz will be able to walk again next month, thanks to back surgery. That's not enough, though, says Saida Ali, executive director of the Kenya-based Coalition on Violence Against Women.

"What we are demanding for is justice," she says. "So it's very good that people step in and give money; however, the police still need to make an arrest. The prosecution and eventual punishment need to happen."

A Potential Clash Of Two Kenyas

Ali paints a picture of two Kenyas: one where enough people have the education and means to help a girl like Liz, and the other that is rife with corrupt institutions that she says are shielding the perpetrators.

Kenya has strict sexual violence laws. Marcher Ruth Ojiambo Ocheing, executive director of Isis Wicce in Uganda, says these kinds of laws, pushed by Western governments, are on the books in many African countries but they mean nothing.

"They have now known that the West believes so much in those laws, so it's very easy for us to go and do all the signing, but it stops on the shelves," she says.

On Thursday, marchers tried to take those laws off the shelves with a dose of public shame. They hanged placards and underwear on the spiked metal gates of police headquarters. The police inspector general's chief of staff, William Thwere, came to the gates to take the petition. He said police were searching for the perpetrators, who had gone into hiding, and he promised to discipline officers if they were found to have committed wrongdoing.

But Saida Ali of the Coalition on Violence Against Women says the longer this investigation drags on, the more she fears some police in Busia County could try to pressure Liz into recanting her story

"It raises concerns around security — for Liz and her mother — and intimidation can take different forms," she says.

Her biggest fear is a clash of those two Kenyas: in which a brazen public protest in Nairobi puts Liz and her mother in rural Kenya in real danger.