Accessibility links
The Tail's The Tell: Dog Wags Can Mean Friend Or Foe Is that a left wag or a right wag? Scientists have previously shown that dogs tend to wag their tails to their right side when they see something friendly, like their owners. But a new study shows that other dogs can actually pick up on these emotional cues. 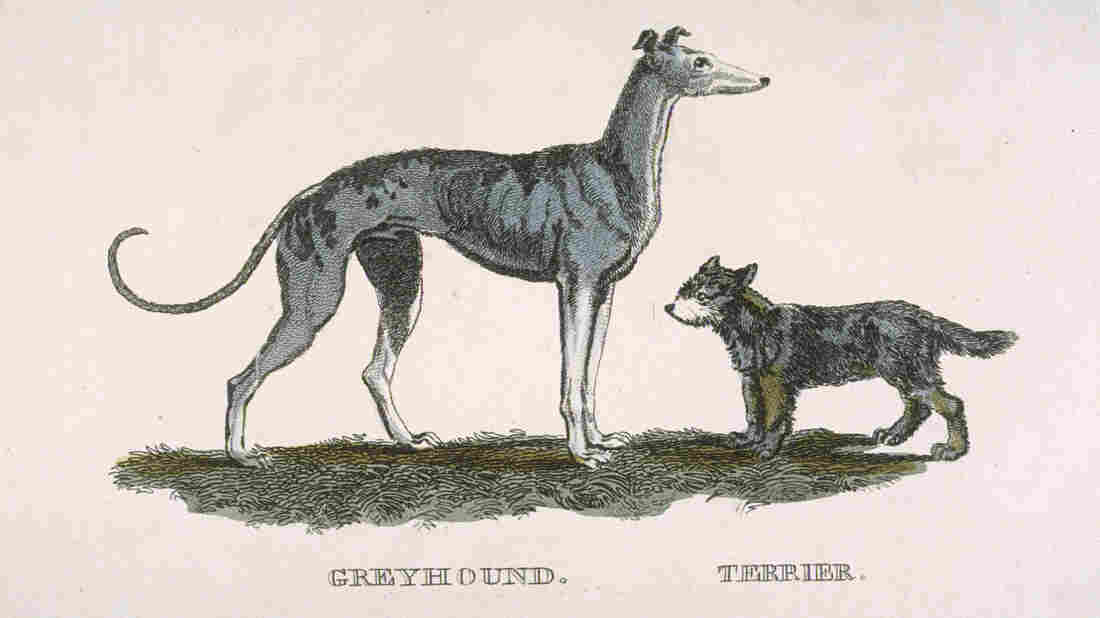 Dogs can pick up emotional cues from another dog by watching the direction of its wagging tail, a new study suggests.

This isn't the first time scientists have shown that the direction of a wagging tail can be linked to doggy emotions. In a previous study, Giorgio Vallortigara of the University of Trento in Italy and his colleagues showed that dogs tended to wag to their right side when seeing something friendly, like their owners. Seeing something threatening, like a dominant unfamiliar dog, made them wag more to their left side.

That study made the scientists wonder if other dogs might actually watch another dog's tail wagging and use its direction as a clue to figure out whether that dog might be a potential friend or foe.

"The question was at this point: Does asymmetric tail wagging convey meaning to other dogs?" says Vallortigara.

To find out, they had 43 dogs wear some little vests that would monitor their heart rates. Then they had the dogs watch some special images of dogs that were designed to remove all stimuli except the wagging tail.

Some of the tested dogs saw a video that showed a silhouette of a dog, while others saw a manipulated image of a real dog. In both cases, the only thing that moved in the image was the tail.

Tom Reimchen, a biologist at the University of Victoria, calls this an "elegant" study. He says there's been a lot of work showing asymmetries in animals' bodies, but "what has not been found is whether there is information that others can gain from that type of laterality," says Reimchen. "And so that's why I think their current paper is very, very interesting and important."

Reimchen and his colleagues had previously tested how dogs would respond to asymmetrical tail-wagging by videotaping dogs as they approached a robotic dog with a remote-controlled tail.

They found that the number of stops that a dog would make when approaching the robodog was higher when tail-wagging was to the right. It may be that dogs were attracted to this apparently friendly tail-wagging, but were confused by the immobile robot's lack of other signals that might convey friendship.

Reimchen says that once people become aware of left vs. right in terms of communicating information, "it suddenly opens up a whole new range of type of questions and the type of observations you're making that you before sort of completely overlooked. These animals are probably far more cognizant of those subtle differences than we would have suspected before."

And while it would be a lot harder for people to spot asymmetrical tail-wagging than it is for dogs, scientists say there could be some practical reasons to try to understand left-right differences in these animals. "These results suggest that dogs have perceptual and attentional asymmetries," says Vallortigara. "So for example, if you are going to visit a dog, if you are vet, there will be probably a side which is better with respect to the probability to evoke a more friendship response or to evoke a more aggressive response."