Accessibility links
The Story Behind The Stunts: Remembering Hollywood's Hal Needham Throughout his career, Needham did the kind of stunts that would either end with a spectacular shot ... or an ambulance. On Oct. 25, Needham died of cancer at age 82. We listen back to a 2011 interview, in which he tells the stories behind some of his most daring stunts.

Hollywood stuntman Hal Needham — one of the most famous practitioners of his dangerous craft — died of cancer on Oct. 25 at age 82. We'll listen back to a conversation with Needham from Feb. 7, 2011, when he had just published a memoir, called Stuntman!: My Car-Crashing, Plane-Jumping, Bone-Breaking, Death-Defying Hollywood Life. 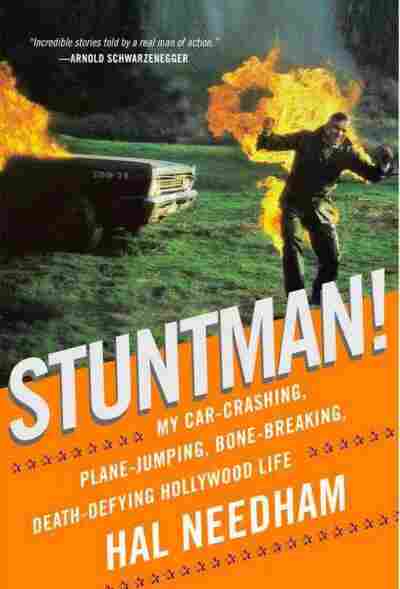 Hal Needham spent most of the 1950s and '60s falling off horses, wrecking stagecoach wagons and falling from really, really high places.

A Hollywood stuntman for more than four decades, he worked on more than 90 films, including some of the biggest Westerns of the 20th century: The Undefeated, Little Big Man, Stagecoach, How the West Was Won and Shenandoah. He recounts his experiences filling in for Jimmy Stewart, Dustin Hoffman and Burt Reynolds in a memoir, Stuntman!: My Car-Crashing, Plane-Jumping, Bone-Breaking, Death-Defying Hollywood Life.

In an interview on Fresh Air, Needham tells Terry Gross about one death-defying leap he made on the set of the TV series Have Gun, Will Travel. He was supposed to jump from a 30-foot rock onto a moving stagecoach, without protection or padding. But things didn't exactly work out as planned.

"[The coach] really looked small. It looked like a postage stamp," he says. "They brought the coach, and I hit it right in the center. But I broke through the top right up to my armpits, and that kind of shocked the folks inside the coach."

There were basic safeguards on set even back then, Needham says — but they were about as rudimentary as it gets.

"When I started, they would take sawhorses — like carpenters use — and put pine 1-by-12's across the top, put some cardboard boxes on top [of those], and put a mattress or two underneath," he says. "And that's what saved you from being killed."

The boards, Needham explains, would bend about 6 inches before they broke, absorbing some of impact of the fall.

Needham explains that it was he who introduced the now-standard airbag into the stunt industry after seeing them used at a pole-vaulting match. The bags — typically inflated with helium — allowed stuntmen to leap from higher distances. Needham, who also coordinated stunts and directed several movies, used the bags frequently in his own films.

"I [once] had a stuntman do a 250-foot-high fall off the strut of a helicopter," he says. "And they go higher than that nowadays."

When Needham wasn't free-falling onto wooden boards, he recalls, he was often performing dangerous stunts with horses. One of the most dangerous stunts he ever did, he explains, was on the set of Arthur Penn's Little Big Man, when he jumped from one moving horse onto the back of another — and then repeated the stunt.

"We did that three times, but we did the whole scene 13 times," Needham says. "Here's what's really hard to believe: We had to do a standing broad jump from the back of one horse to the back of the next one over 14 feet [away]. There's no athlete, I think, that can do that standing still."

Had Needham failed, he would have been trampled, he says — and not just by the horses, but by a 4,000-pound stagecoach.

"You couldn't fail," he says. "If you messed up, you were going to be in big trouble."

There was an upside, though: Every time Needham redid a stunt, he got paid again. And that could add up. 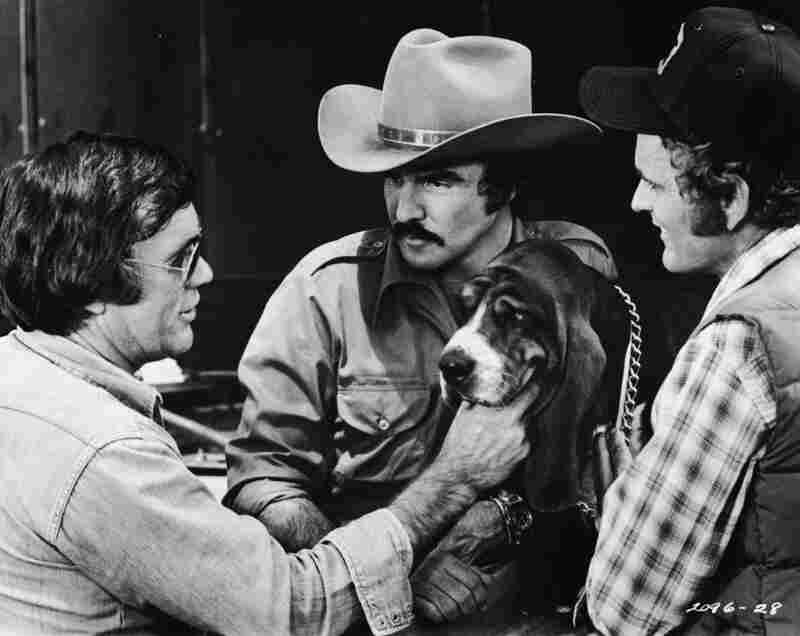 Veteran Hollywood stuntman Hal Needham — who turned director for the 1977 hit Smokey and the Bandit — lines up a shot with Burt Reynolds, Jerry Reed and Happy the dog. Universal Studio/Getty Images hide caption 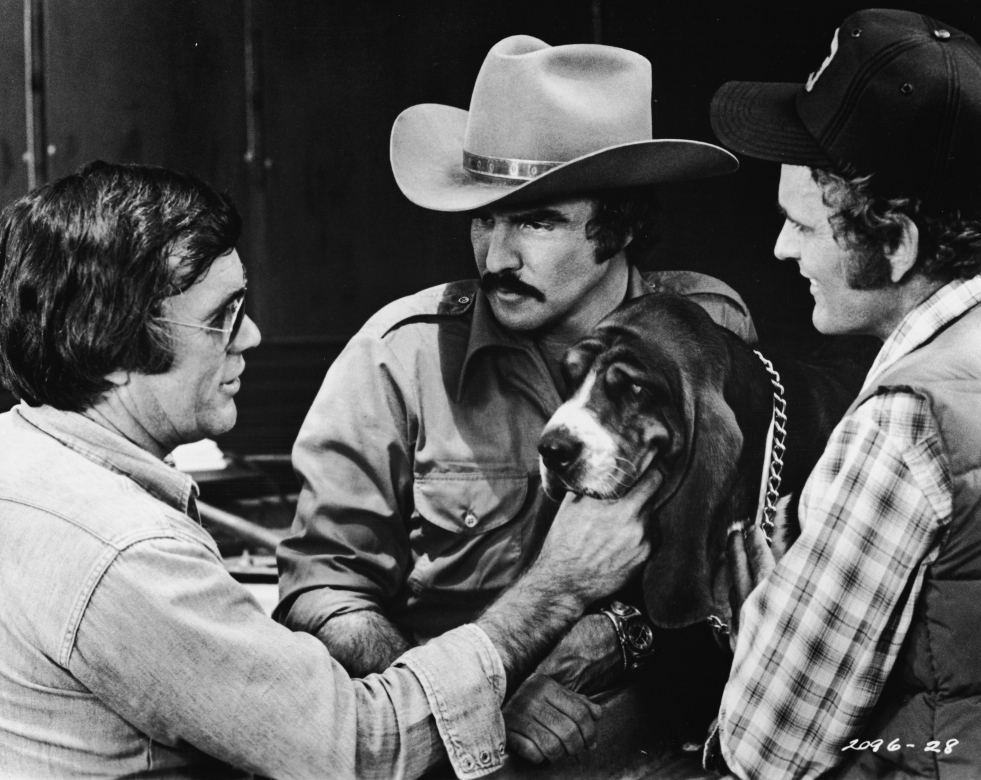 Veteran Hollywood stuntman Hal Needham — who turned director for the 1977 hit Smokey and the Bandit — lines up a shot with Burt Reynolds, Jerry Reed and Happy the dog.

In 1975, Needham transitioned from Western movies and entered the world of car stunts. He took lessons on turning over cars and going into skids. In the 1973 Burt Reynolds film White Lightning, it was Needham who jumped a car from a riverbank onto a floating barge.

But during one rehearsal, an error on the barge captain's part had left the target farther away than Needham had stipulated in practice. Needham knew immediately that something was wrong.

"When I was in the air, I said, 'This ain't going to be pretty,' " Needham says. "I hit the back of the barge with the front of my car, and it just stood it up in the air, and it just balanced right on the end. [Then] the back wheels were in the water. I was out of that thing in a heartbeat. ... Had that car fallen into the river — the river was muddy, deep and swift — I would have been down in Louisiana before they found me."

Still, he says, he never lost the confidence to perform a stunt again.

"I said, 'I have to rethink this situation and make sure I don't make that mistake again,' " he says. "But my confidence didn't wane from that. ... You just have to look it all over and clear up your mistakes and say, 'Lets go.' "

On his stunt horse Hondo, who lost his life performing a stunt on the set of Little Big Man

I played the Indian who jumped from my horse to the horse pulling the coach. The director wanted a shot of me coming off the hillside prior to that shot. So he said come as fast as you can. It was fall, and the hillside grass was all dead. ... So here I come just as fast as Hondo could run, and in a blink of an eye, I was sailing through the air. He had stepped in a gopher hole and broke his leg. And I looked back and I could see he was trying to get up. So I went back and ... I held him down.

We were way out in the country. ... They said if you don't get a vet out here and verify that he had a broken leg, then you can't collect the insurance on him. And I said, it's going to take two hours to get a vet out here. I don't want that horse to lay there suffering. Get me a gun. So anyway, we wound up shooting him, and don't tell me a big man don't cry.

Percodan. Carried a bottle with me all the time. When a stuntman got hurt, they'd call Hal and tell him to bring his Percodan. When I'd go on location — maybe Mexico or something like that — hell, I'd take 100 with me. Because I know I'd be the only one who had them. So I could pass them out when the guys got hurt. You work a lot when you're hurt when you're a good stuntman, because you're going to be hurt quite a bit. And you can't let a sore leg or a bruise or something stop you, so you just take a Percodan and go to work.

On how he got started in the stunt business

By accident. Before I went in the military, I was a treetopper. [He pruned trees.] When I went in the military, I was a paratrooper. I got out, I moved to Orange County, and I went back into the tree business and broke my ankle. And while I was healing up, there was a little root-beer stand close by and I'd go over and have some. There, I met a guy who was an ex-paratrooper, who was trying to break into Hollywood. And he got us a job on the show called You Asked for It. It was a request program, and he wrote the request and we did the stunt. He was on horseback in a full gallop and I was sitting out on the wheel of a 150 Cessna, and as we flew over, I jumped out of the Cessna and knocked him off the horse. That's how I got my first job. He got me my second job, which was The Spirit of St. Louis starring Jimmy Stewart. My job was to either stand on the top of the wing of an old biplane as they were doing loops ... or hang on a rope ladder, hanging by my ankles, and then transfer from the top of one wing to the bottom of another one. And that was my second job and I said, 'Wow. Look at all of the money I made — I think I will change jobs.' And that's how I decided to be a stuntman.

On current special effects in movies

I hate it! ... A guy jumps off of a 250-foot dam, and it cuts to the water and he bobs up, like he's a duck. And you go, 'Wait a minute. Give me a break. A guy would kill himself doing that. There's no way he could do it.' And it just — with cars and motorcycles and all kinds of things. To me, it takes all of the reality out of the show. I just can't stand it. Even as a director, I never did that stuff. We did it for real. I can look at it onscreen and go, 'That's B.S. That don't work. You can't do that.' And so I lose all interest in the film.

Read an excerpt of Stuntman!