Accessibility links
Adult Education: How To Translate Adult Education Into Job Skills A typical adult education program can take years for those who dropped out of high school. But a model that started in Washington state shortens that time and uses a combination of team teaching, internships and extra support to boost student skills and get them into the workforce. 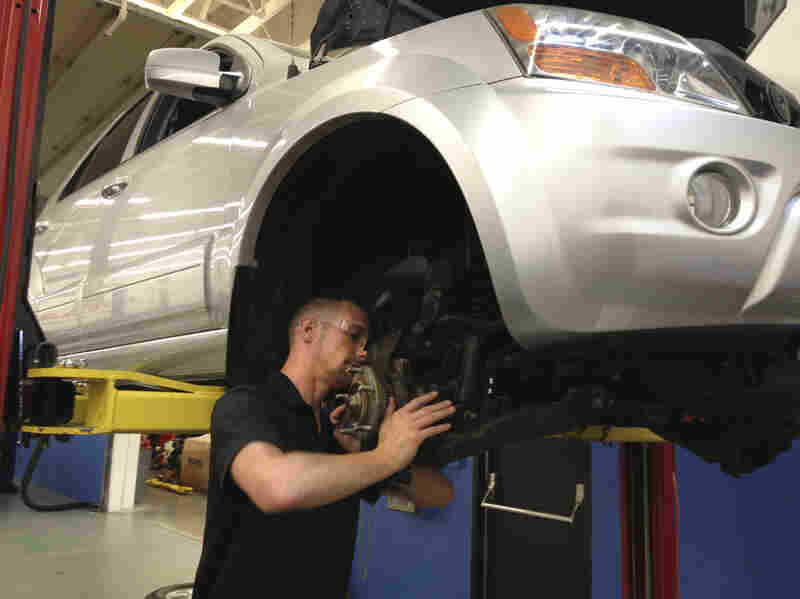 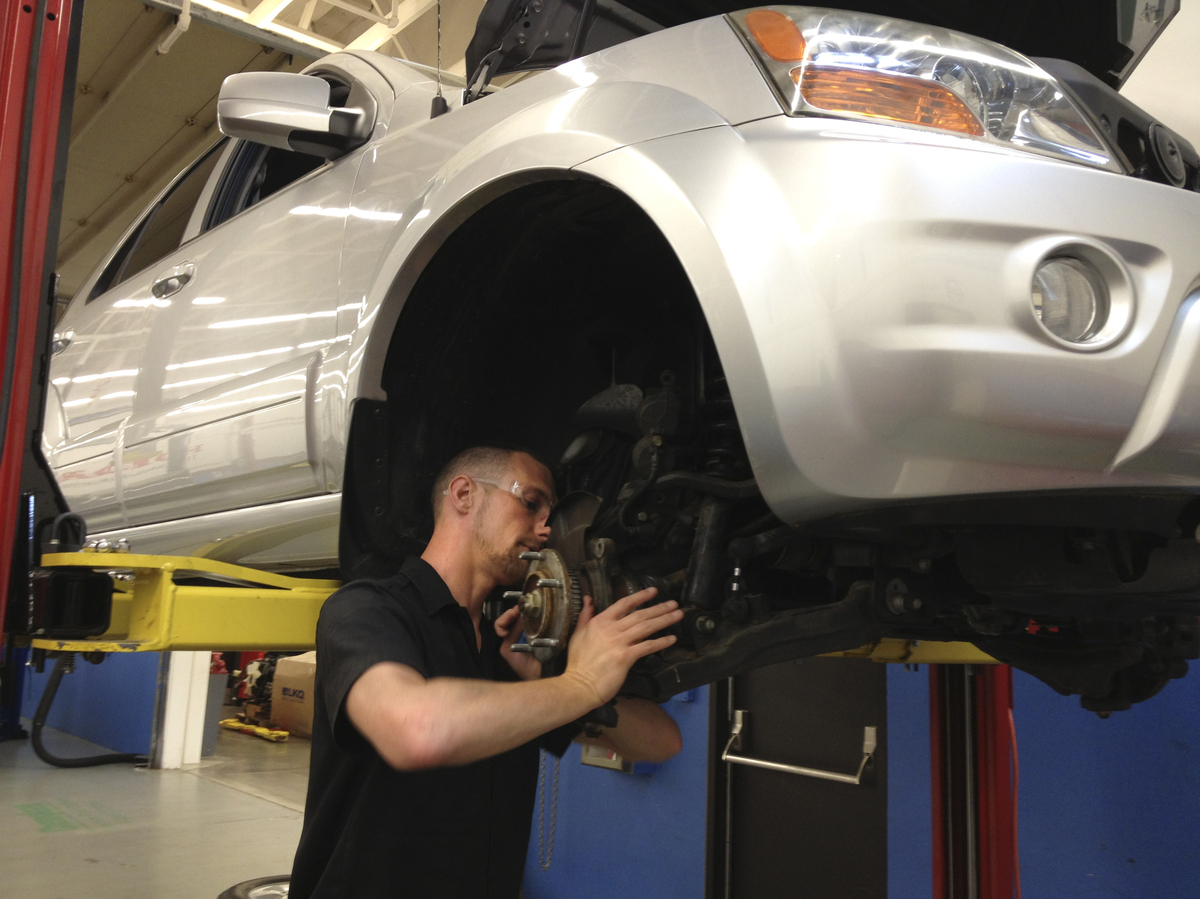 C.J. Forza, a student in the I-BEST program in Washington state, repairs a car for class at Shoreline Community College.

This is the third report in a four-part series on adult education.

Adults wanting to go back to school have the odds stacked against them. They juggle many responsibilities, there are long waitlists for classes and often there isn't a connection between what they learn in class and the skills they need to get a job.

But a program offered in Washington state has been so successful in getting adult students into the workforce that more than 20 states are implementing the model. It's called Integrated Basic Education and Skills Training, better known as I-BEST.

About 10 years ago, the Washington state community college system realized it had a serious problem. They had too many people who wanted jobs and too many jobs unfilled.

What they did was create a program based on what employers needed students to know — and then made sure that's what students were being taught. To make sure the new program was effective, they used "team teaching."

'The Eye Of The Class'

She says in the past, when students nodded, she assumed they understood what she meant. But she's learned that often they don't. They just don't want to seem stupid, or if they're from a different country, they don't know it's OK to ask a question. So Rogers plays what she calls "the eye of the class."

For example, one thing Rogers looks out for is the use of idioms, which could confuse students.

"Candy would say these phrases like, 'Fly by the seat of your pants.' And I would interrupt, and I'd say, 'Does that mean I'm throwing my pants up in the air and flying?' And she would laugh and the students would laugh because that's what they're thinking," Rogers says. "By my modeling that, it gives them permission that it is OK to ask questions and that's the sign of an intelligent and a good student."

Benteu and Rogers also role-play appropriate workplace behavior, those "soft skills" — such as how to work in a team, follow rules and show up on time — that are critical to success. They may seem obvious, but are not.

"We have lots of conversations about the way we dress and the way we smell. Too much perfume, too much incense, not enough deodorant," Rogers says.

From The Classroom To The Workplace

Students going through this program are pretty typical of what you'd find in any adult education class across the country. They've often dropped out of high school, have low levels of reading and math, many don't speak English fluently.

Through this program, they can take college-level courses and earn certificates in any of the almost 200 courses offered, from medical billing to welding to building maintenance.

Students at Shoreline Community College have just finished the theory portion of an auto mechanics class, where they learned about the physics of manual transmissions. Then it's a quick change into overalls and the hands-on part begins.

This class isn't child's play though. Instructor Mark Hankins says students have to learn the complex systems of today's cars so at the end of the program, "they can go out and do a brake job, they can do fluid replacement, they can do inspections.

"And those are the kind of jobs that there's a big need for," he says.

All I-BEST programs have to demonstrate that students can get jobs paying a living wage when they graduate. In most parts of Washington state, that's $13 an hour.

C.J. Forza says his brain "just clicks with engines." He dropped out of school in the 12th grade; he's now 31. He loves cars so much he works part time in a mechanic shop already. Forza's now learning the "why," not just the "how," of repairs.

"Instead of just guessing at what it is, I'm more able to figure out, OK, this issue can be caused by this, this or this," he says.

Like most adults here, Forza is managing many responsibilities, without much money to hold his life together. But he sticks it out because he can see exactly what the connection is between this class and his career.

At the end of one year, Forza will have a certificate in general auto mechanics and will see his pay jump from $10 an hour to $15.

"I want to be the breadwinner of my family. I have a 3-year-old daughter that I need to raise. I want a career not a job," he says.

'Not Everybody Has Bootstraps'

Instructor Hankins says this program really does make a difference.

"I have a student that is now a general manager of a dealership, and I'm sure he's making two or three times more salary than I am right now," he says with a laugh.

It can take years before adults in typical adult education programs can take college courses. But what makes I-BEST unusual is that it shortens that time by bypassing the GED exam completely. Students in a Washington state community college program who earn an associate's degree can receive a high school diploma retroactively.

I-BEST's Erickson says that when people talk about the program's success, they often focus on the numbers and the model and the research. But at its heart, she says, I-BEST is about giving people another chance.

"A lot of people will say, 'Why can't they just pull themselves up by their bootstraps?' But not everybody has bootstraps or even boots," she says.

Erickson says if we can create opportunities to get more people educated and into the workforce, why shouldn't we?