Accessibility links
Space Agencies Of The World, Unite: The U.N.'s Asteroid Defense Plan NASA has already scoped out most of the comets and asteroids large enough to do global damage. But the United Nations thinks an international consortium of space programs need to get together in an effort to stop smaller — but potentially still dangerous — asteroids from hitting Earth. 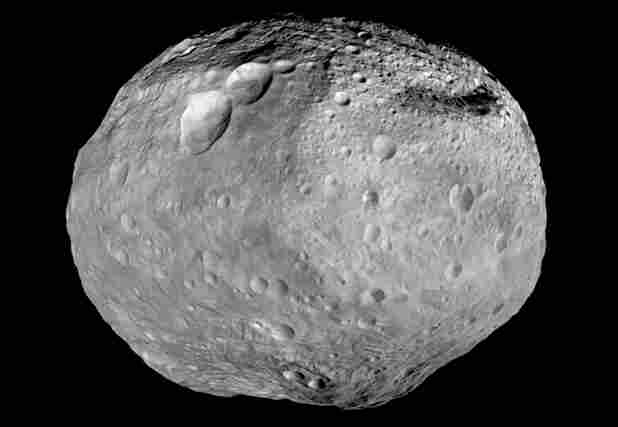 This mosaic image from NASA's Dawn spacecraft, captured between 2011 to 2012, shows the giant asteroid Vesta. The mountain at the south pole, seen at the bottom of the image, is more than twice the height of Mount Everest. NASA hide caption

The United Nations General Assembly may approve a plan soon for the world's space agencies to defend the Earth against asteroids.

The plan, introduced last week, is expected to be adopted by the General Assembly in December. It would do two things: create an International Asteroid Warning Network so countries can share what they know about asteroids; and spin up a group of scientists from several countries' space agencies to look for smaller asteroids, as well as make plans to divert them away from the Earth.

The problem here isn't a large asteroid. NASA has already found more than 90 percent of the comets and asteroids larger than 1 kilometer, or 0.6 miles, across — those are the ones big enough to do global damage.

The concern is for the smaller meteoroids — ones that are more than 450 feet across. These can still get through the Earth's atmosphere and rain down on the planet. Although most of the Earth is covered by oceans, an asteroid of this size could destroy several states or an entire city if it lands in the wrong spot.

An international group, formed from discussions at the U.N., would test a strategy to deflect an incoming asteroid by using "a fleet of robot spacecraft to slam into the asteroids," says veteran NASA astronaut Tom Jones. These kamikaze robots would change the direction of the incoming asteroid so it doesn't crash into the Earth.

NASA tried something similar with its 2005 Deep Impact mission, which slammed into a comet to see how the inside differs from the outside.

Jones estimates the cost of a deflection plan would be comparable to the price tag for the Mars Curiosity Rover, which cost $2.5 billion. By working with other space agencies, this cosmic insurance policy would spread this cost around. The plan is for the space agencies to work together, like they have done on the International Space Station, except this project would come with the blessing of the U.N. and the global community.

"Those telescopes are not sensitive enough to see distant, small, dark asteroids," Jones says. "The only time they see those is by accident when those asteroids drift past the Earth close by, then you can catch a few of them in your sights."

In 2005, Congress passed legislation asking NASA to find 90 percent of these small asteroids by 2020, but NASA is still working on that. The space agency recently called for the public's help in searching for them, and it brought back a retired spacecraft to spot them. To get closer to this goal, NASA needs special infrared telescopes in space, but the space agency doesn't have the money for them, says Lindley Johnson, program executive for NASA's Near-Earth Object Program, which tracks comets and asteroids in the Earth's neighborhood.

Johnson and Jones both say a plan from the U.N. would enhance what NASA is already doing.

"Here's the biggest of all natural disasters that we're talking about, and it's preventable," Jones says.

Earlier this year, a meteorite hit Chelyabinsk in Russia and injured 1,000 people. "If the people in Chelyabinsk had been warned a day beforehand," Jones says, "they could have been away from the windows or in shelters where almost nobody would have been hurt."

Getting several space agencies and their respective countries on board can also avoid trust problems, Jones says.

"Do you trust the Russians? Do you trust NASA to do a deflection all by itself?" he says. "If they make a mistake halfway through and an asteroid happens to land somewhere else than where we originally thought, who's to blame? We'd rather have that responsibility shared and sanctioned by the U.N. rather than a unilateral approach."

The U.N. member nations that are actively participating include the U.S., the U.K., the countries that are part of the European Space Agency, Russia, Japan, Nigeria and Mexico, says Sergio Camacho-Lara, director of the U.N. Office for Outer Space Affairs.

As the U.N. is the only universal forum for discussing international issues, Camacho-Lara says it is the best way to make sure the world's governments can start thinking about the threat from asteroids. As of now, the resolution is a draft that has been endorsed by several U.N. committees, but Camacho-Lara says in the past 50 years, only four resolutions have reached this point and not been adopted by the General Assembly.

"We will be finding, in the next five, 10 years, another half million or more [asteroids], so the magnitude of the problem is quite a bit larger than what we have right now," Camacho-Lara says. "But the asteroids are there, it's a question of finding them before they actually find us."