Accessibility links
Book Review: 'The Story Of A New Name' By Elena Ferrante Bound by the confines of gender and finances, two young women take divergent paths in Elena Ferrante's The Story of a New Name, the second book in her "Neapolitan Novels" trilogy. Critic John Powers believes the bold, expansive series to be semi-autobiographical, a revelation from a secretive author who won't reveal her true name. 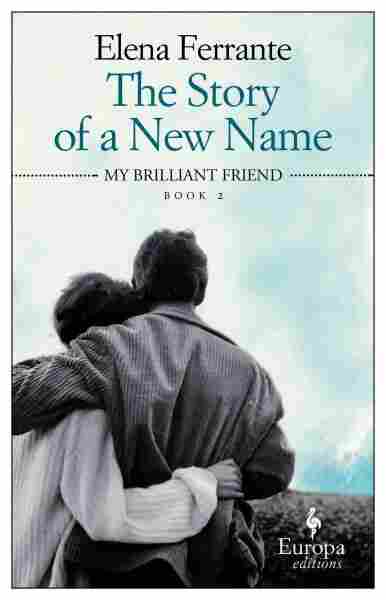 The Story Of A New Name

Title
The Story Of A New Name
Author
Elena Ferrante

Some writers you read and move on, but every now and then you read one whose work knocks you back against the wall. This happened to me with the great Italian novelist Elena Ferrante.

I first encountered her through her scalding 2002 novel, The Days Of Abandonment, whose narrator, Olga, may be the scariest jilted wife since Medea. What makes Olga scary is not what she does, but what she thinks and feels, and her ferocious precision in describing everything from lousy sexual encounters to her not-altogether-maternal feelings about her children.

Hooked, I quickly devoured Ferrante's other available novels — Troubling Love and The Lost Daughter. They, too, spoke with such personal directness I felt sure they must be confessional. Yet when I tried to confirm this, I soon discovered that Elena Ferrante is a pen name and that she's as publicity-shy as J.D. Salinger, leading some male commentators in Italy to claim, predictably enough, that she's actually a man. Me, I was left wondering how Ferrante came to write with such fearless power.

Then, two years ago, an indirect answer proposed itself. Ferrante brought out My Brilliant Friend, the first volume of a trilogy known as "The Neapolitan Novels." Narrated by a 60something writer named Elena, the book feels like Ferrante's personal origin myth, her Portrait of the Artist as a Young Woman. This seems even clearer in volume two, The Story of a New Name, just out in a keen English version by Ferrante's regular translator, Ann Goldstein.

"The Neapolitan Novels" tell the story of Elena Greco and Lila Cerullo, who meet at age 8 in early 1950s Naples. They bond over their love of books and their yearning for a life larger than what's offered by their poor, working-class neighborhood that cruelly grinds down everyone, especially women. Where Elena is a bright, accommodating girl eager for approval — she's a classic A-student — her brilliant friend Lila is more gifted, sexier and utterly implacable — she does what she wants. In a decision that alters their lives, Elena's parents pay to let her continue beyond grade school, but Lila's father refuses.

As The Story of a New Name begins, the ripples of this decision couldn't be more obvious. Even as Elena goes to high school and pines for a handsome upperclassman, the gorgeous Lila is getting married at 16 to Stefano, a local grocer who buys her clothes like Jackie Kennedy's, but whom she holds in contempt.

Over the course of the novel, we watch their destinies diverge. Elena is thwarted in love and feels intimidated when she starts mingling with the educated classes at college in Pisa. Lila is trapped in a vulgar, gilded cage whose bars she shakes until her husband beats her. As ever, Elena feels overshadowed by Lila, whose life always seems more incandescent than her own, while Lila envies Elena's shot at escaping their old neighborhood's small-mindedness and machismo.

While Ferrante's first three novels are remarkable for their compression and intensity — The Days of Abandonment remains her masterpiece — My Brilliant Friend and The Story of a New Name leaven her fierceness with a new warmth and expansiveness. They don't merely offer a teeming vision of working-class Naples, with its cobblers and professors, communists and mobbed-up businessmen, womanizing poets and downtrodden wives; they present one of modern fiction's richest portraits of a friendship.

It's tempting to say "women's friendship" because Ferrante follows Elena's and Lila's search for freedom in a culture so male-dominated that 50 years later, Silvio Berlusconi could hold "bunga bunga" sex parties and still keep getting elected prime minister. Never one to fear dark or spiky emotions, Ferrante captures their shifting friendship in all its jagged complicity and competition, its furious jealousies and lasting affections.

For all of Lila's defiant grandeur, these books are finally about Elena. To find her own, original voice, she must shake off the crushing values she was raised with, resist the blandishments of conventional success and learn from Lila without being overpowered by her. To achieve all this is an arduous struggle, but then again, that's no big surprise. As her novels make painfully clear, you don't get to write as brilliantly as Elena Ferrante for free. You have to earn it.

Read an excerpt of The Story Of A New Name