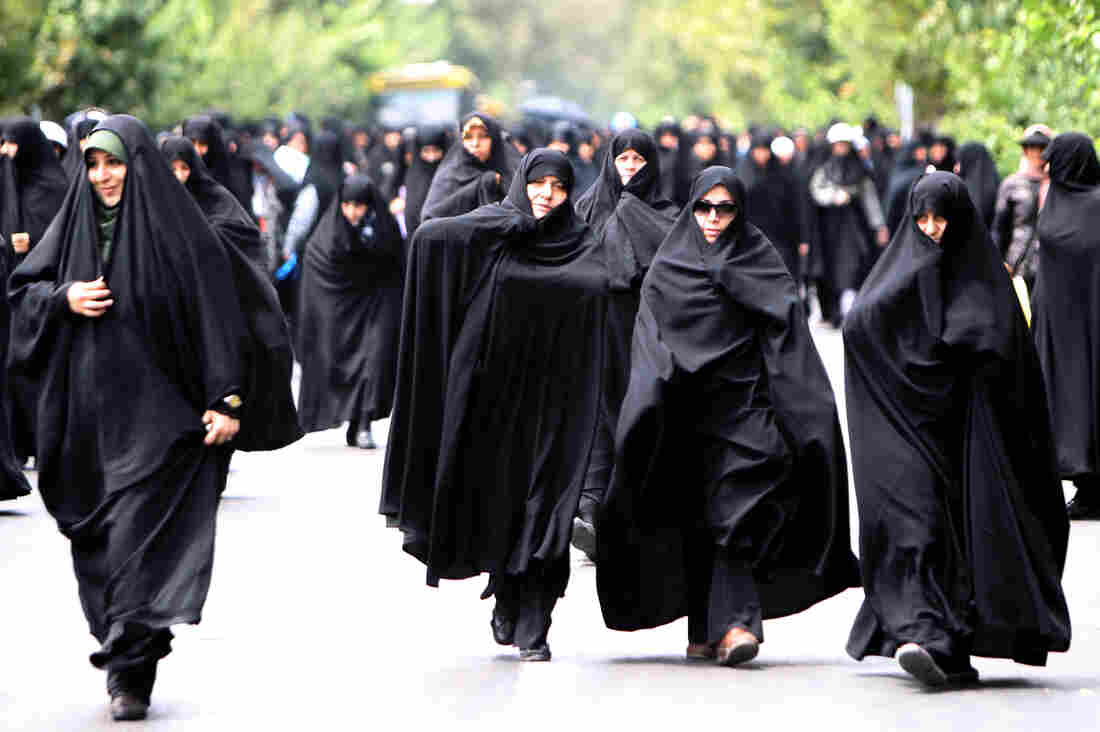 Iranian demonstrators march in Tehran in 2011, during a protest asking the government to intensify its enforcement of the Islamic dress code. Atta Kenare/AFP/Getty Images hide caption

Monday is the 34th anniversary of the 1979 storming of the American Embassy in Tehran, when Iranian militants took 66 hostages and held them for more than a year. U.S.-Iranian relations have been contentious ever since, but recent events have stirred hopes for progress.

Iranian voters overwhelmingly chose a more moderate president in June, and American and Iranian mediators are meeting to try to resolve disputes about Iran's nuclear program. 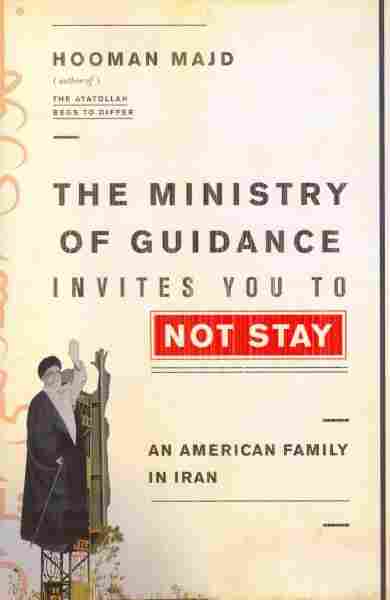 The Ministry of Guidance Invites You to Not Stay

An American Family in Iran

Few people are better positioned to offer insight into U.S.-Iranian relations than Iranian-American journalist Hooman Majd. Though he's lived most of his life in the U.S., he's the grandson of an Iranian ayatollah, the son of a former Iranian diplomat under the shah, and is related by marriage to a former president of the country.

In 2008, Majd was the translator for a United Nations speech by then-President Mahmoud Ahmadinejad, though he's criticized the government in many of his writings.

Majd's latest book, The Ministry of Guidance Invites You to Not Stay, offers a street-level view of life, culture, politics and political repression in Iran today. It recounts and reflects on the year he spent in Tehran with his American wife and young son, an effort to reconnect with the land of his birth as he began his own family.

Majd's previous books include The Ayatollah Begs to Differ and The Ayatollah's Democracy. He joined Fresh Air's Dave Davies to discuss sanctions, sulking and the common Iranian slogan "Death to America."

I know that my cellphone in Iran ... is bugged and they listen in, and my emails, I'm sure, are monitored inside Iran. They have my email address; it's not like they can't snoop on it. They're probably as good as the NSA when it comes to snooping, if not better.

But I think they were just concerned about what it was I was doing there. They kind of couldn't believe that I would be in Iran. It probably helped that my family was there, because that was my excuse. ... It was also a true excuse, that I was there to experience life, and for my family to experience life in Iran.

As someone who had written for foreign magazines and newspapers and written books, they imaged that there was something going on as well, that I was going to write about stuff, or I'm sure the most paranoid of the people in the Intelligence Ministry probably assumed that I was a spy.

The city of Tehran is a very modern metropolis, and there's an emphasis in the Islamic republic on science and advancement and technology. We see that with the nuclear issue. So you do see there's industry, there's heavy industry; they make everything from cars to refrigerators to electronic goods. So it's a very modern place and very European-looking in many ways. That emphasis is something you don't see in a lot of other Islamic countries as much as you do in Iran. ...

[Tehran is] superbly maintained, as well as it can be, given that it's a sprawling city of 14 million people. They collect the trash every single day, seven days a week. It's remarkably clean ... even though there's heavy, heavy pollution. 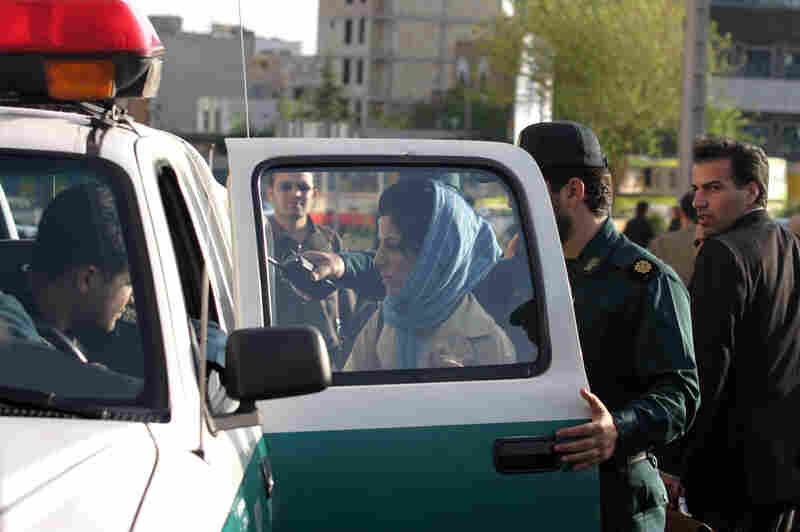 Police in Tehran detain a woman in 2007, for not adhering to the Islamic dress code. Anonymous/AP hide caption 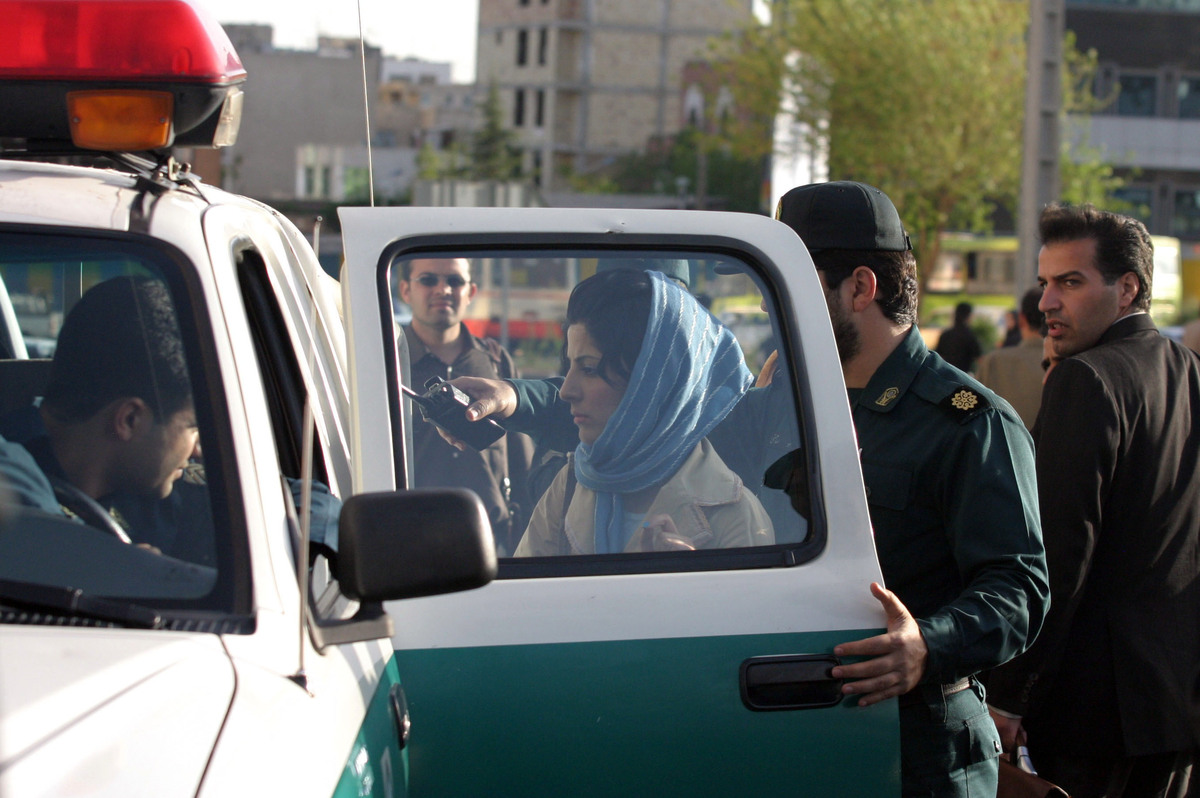 Police in Tehran detain a woman in 2007, for not adhering to the Islamic dress code.

On how the government enforces the dress code for women

They have to have their hair covered, and they have to wear a long overcoat of some kind. It can be a very light cotton coat in the summer that covers their behind and comes down to at least the knees. My wife was stopped a couple of times for her overcoat not being long enough. ... It's just uncomfortable to have to always think about what you're wearing every time you go out.

There are about 70,000 cops in Tehran: men and women who patrol in these vans, these green and white vans, and park themselves on corners of streets in busy areas, by shopping malls, and are kind of quite menacing to a foreigner, or [to] someone who doesn't live there. It seems like Iranians would take it with a grain of salt and argue with them if the women were pulled over by other women in chadors [who] said, "Your hair is sticking out," or something. And I saw a number of times women screaming at them, like "Mind your own business," and stuff like that. But sometimes they would get arrested.

On how sanctions have affected Iran

The effects are quite severe, and in the time that we were there in Iran, the most severe sanctions had not yet been imposed, but the effects of them were starting to be felt. ... Companies can't manage well in an economy where they're not connected to the outside world. Banking sanctions have caused inflation to go sky-high, devaluation of the currency. People are struggling.

Challenging The Stereotypes Of Modern Iran

It very much has affected things like medical supplies, because although medicine is supposed to be exempt from sanctions, there's no way for the Iranians to pay for the medicine because they can't transfer funds back and forth because of the banking sanctions. I actually know someone who had cancer and unfortunately she's passed away, but she couldn't get medicine anymore in Iran, could not get cancer medication; [it] did not exist at a certain point.

She was fortunate enough to come to America in the last year of her life, and it was too late. ... But that's true of other cancer patients in Iran who have not been able to get medicine, medical supplies and the kinds of drugs that they need.

But even simple things like imported goods that in previous years were widely available are less available now. So importers have been widely affected by that or have lost their jobs or their ability to make money. Exporters have lost their ability to export goods. And Iran had a manufacturing base and, again, they can't be paid for certain things. So the economy is actually quite critical, and the sanctions are a big part of that. Iran is not a hermit kingdom like North Korea; it was very interconnected with the world economy.

On sulking as part of Iranian culture

When we were in Iran, President Ahmadinejad — not being able to get his way on one particular thing he was trying to do, which was to fire an intelligence minister — engaged in a sulk. He decided to go home and say, "I'm not coming to work," and he did that for about 12 days. And it reminded me of this characteristic that we have in Iranian culture where people do sulk, whether it's for something as simple as a social sulk or a family sulk, or ... it's political. 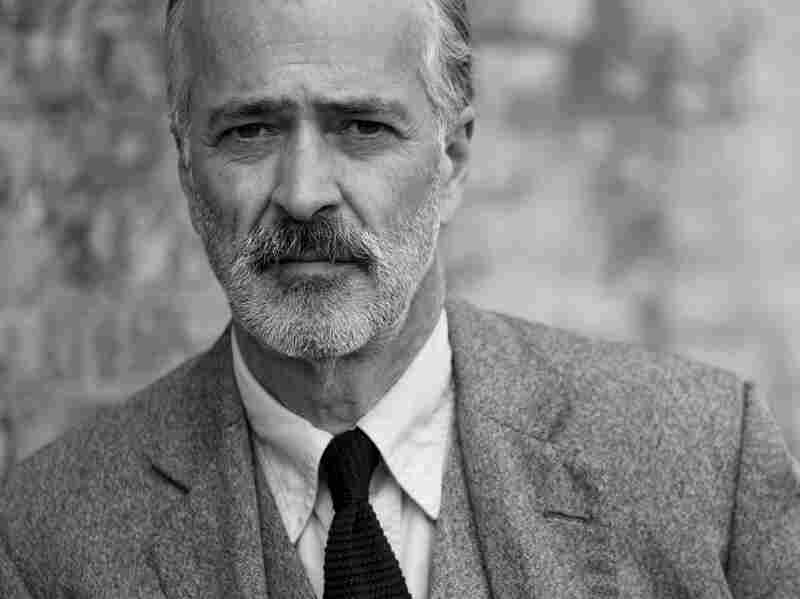 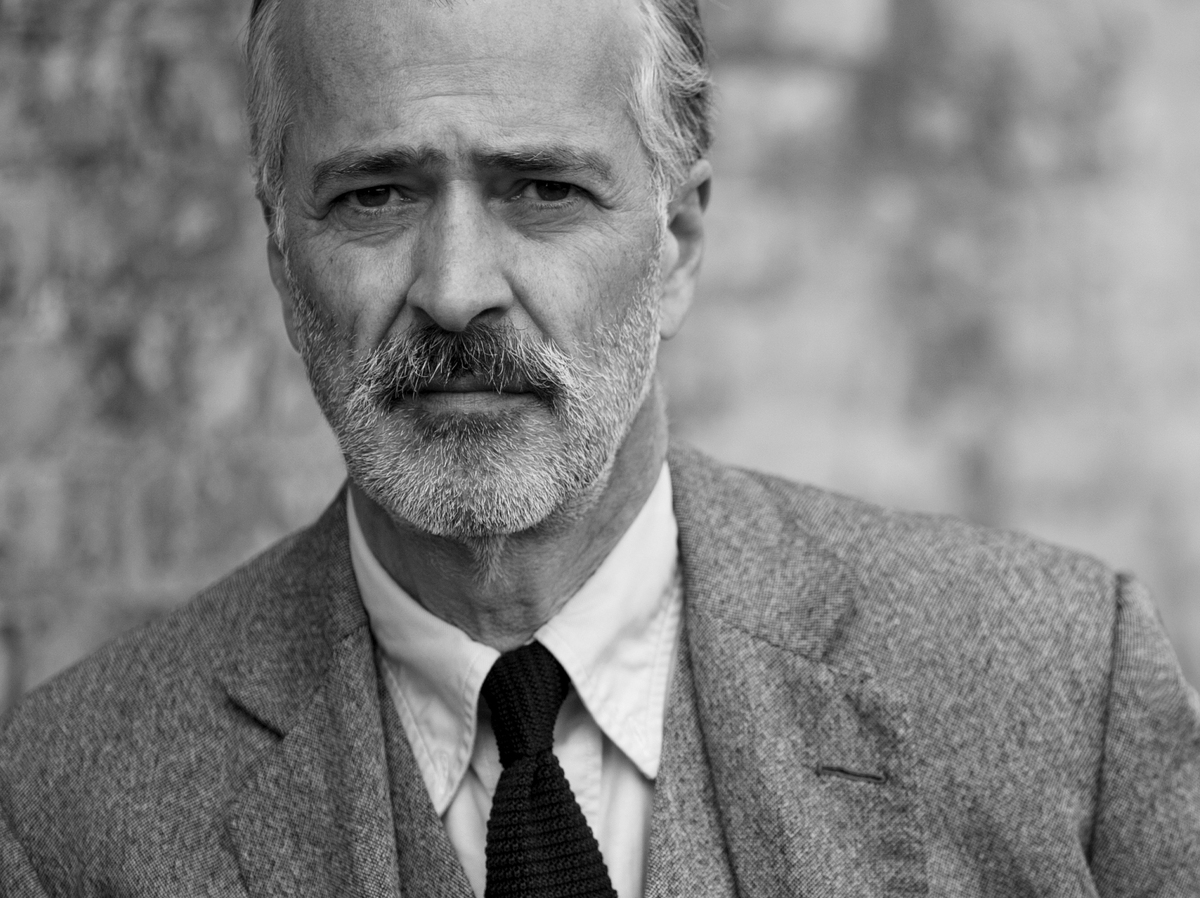 And it goes all the way back in Iranian history and, most famously, [to] Prime Minister [Mohammad] Mosaddegh, who was overthrown by the CIA and British intelligence in 1953, who was constantly engaging in sulks in order to get his way, and if he didn't get his way he would suddenly fall ill or faint and cry and take to his bed, and even have meetings from his bed wearing pajamas.

On the Iranian slogan "Death to America"

I mean, most people — and including this current, new president — believe that the slogan "Death to America" should be retired, and they've said so publicly. There are hard-liners in Iran who say, "No, no, that's the essence of the revolution. Our anti-imperialist, anti-American hegemony stance is what makes us unique in the world." So there's that argument going on right now in Iran.