Accessibility links
Thanks To Parasites, Moose Are Looking More Like Ghosts Parts of the U.S. and Canada have seen a rapid decline in moose populations that may be linked to climate change. And, scientists and hunters warn, those declines have often been accompanied by a surge of infestations of the winter tick. 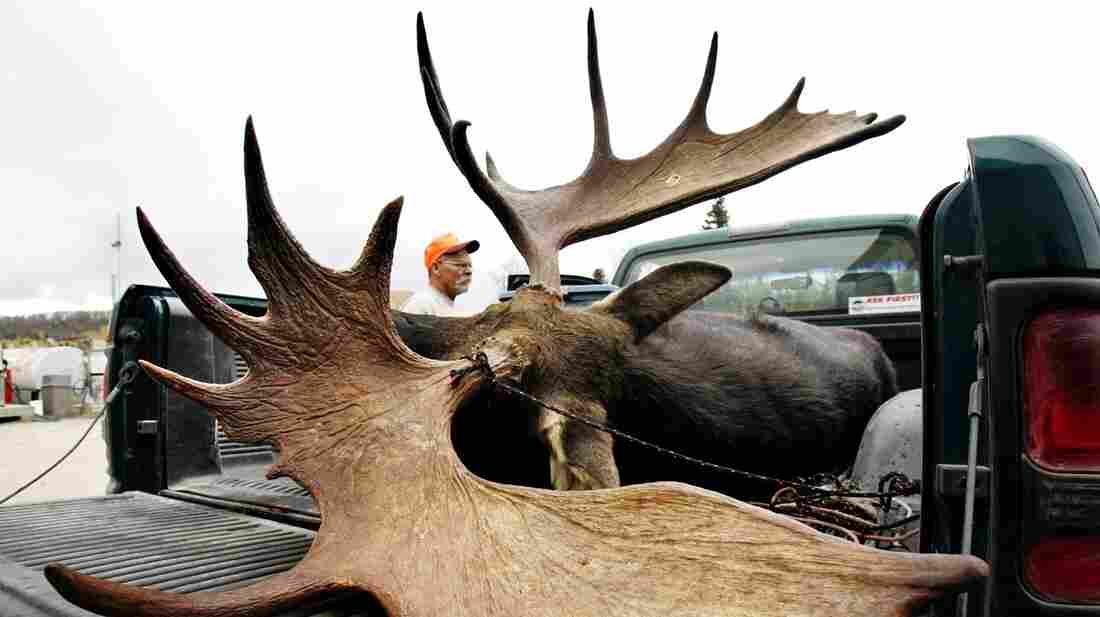 A large bull moose is inspected by a hunter at a weigh station in Maine. Robert F. Bukaty/AP hide caption 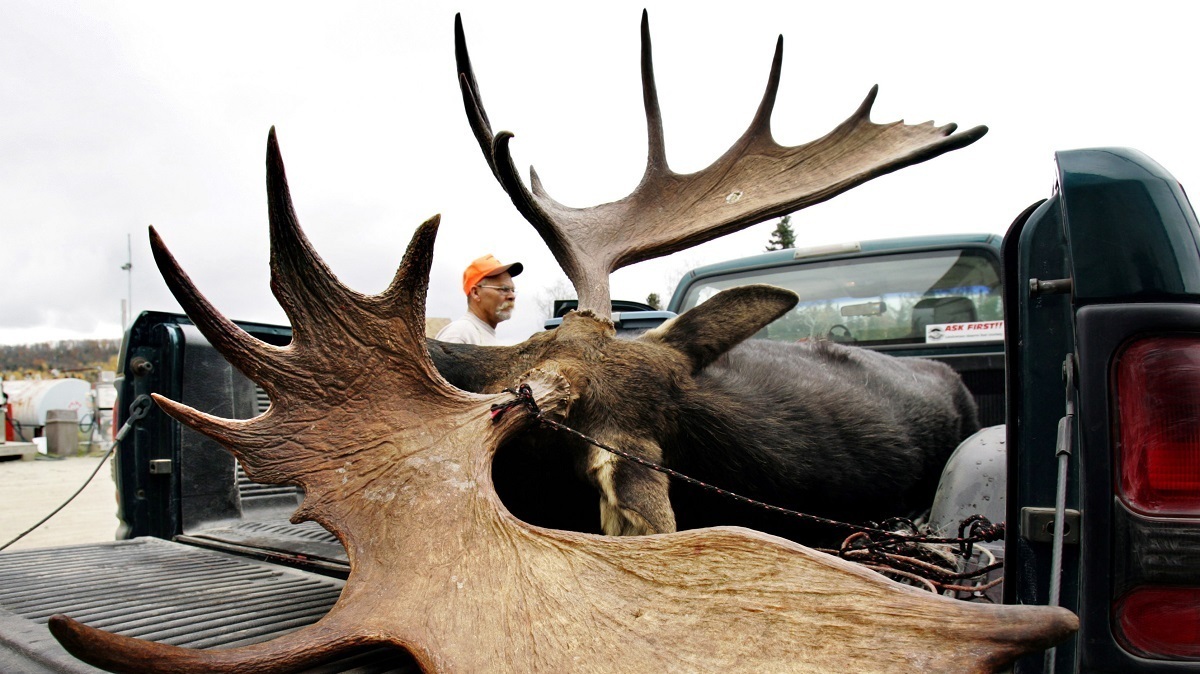 A large bull moose is inspected by a hunter at a weigh station in Maine.

The news for moose is not good across the country's northern tier and in some parts of Canada. A recent and rapid decline of moose populations in many states may be linked to climate change, and to the parasites that benefit from it.

In Minnesota, moose populations have dropped from a high of more than 12,000 two decades ago to fewer than 3,000 now. Moose in some parts of Manitoba have declined by 50 percent and more.

"The colder the weather, the more moose you're going to see," says hunter Nat Rockwell, as he brings a female moose he bagged in New Hampshire's White Mountains to a weigh station.

The 70-year-old tool and die machinist watches as the moose is hoisted and clipped to a scale. She weighs in at 630 pounds. Rockwell asks New Hampshire's moose project leader, Kristine Rines, to check for ticks.

Though most ticks have already abandoned the moose body, Rockwell's concern about ticks is well-placed. Biologists and hunters around the nation say that declines in moose populations have often been accompanied by a surge of infestations of the winter tick. A single moose can carry more than 100,000 of the bloodsuckers.

That happens when the moose "have scratched all winter long trying to get the ticks off, and they break their hair all off, and because the hair follicle is broken you see the white inner portion," she says. "And they literally look like ghosts."

One recent year, nearly every moose calf-tracked by New Hampshire biologists died. Rines says several factors are at work. Those include shorter winters, with less snow on the ground. That helps the ticks, which die if they drop off an animal onto snow, but survive and breed if there is bare ground to land on.

Climate change, Rines says, could spell the fate of the moose in New Hampshire. Not only do shorter winters benefit the ticks, they also benefit white-tailed deer, which act as a reservoir for a parasite known as brain worm. That parasite doesn't harm the deer, but it's fatal for moose.

"It might be some of this and some of that, but there is a decline in moose. I've seen it," says Rockwell. Regardless of all the theories floating around, he says something's definitely going on.

"I scouted four days, and there was very little sign of them," he says of a recent moose hunting trip. "So, I believe there's a lot of truth to what the game wardens are saying."

New Hampshire's moose population has dropped by more than a third. The state has cut back the number of hunting permits, from more than 600 a few years ago to fewer than 300 this year.

Such sharp decline could take a toll on economies — and cultures — in states like New Hampshire and Minnesota, where the moose's iconic silhouette appears on many a bumper sticker. In New Hampshire alone, guided moose tours are worth an estimated $115 million a year.

Rockwell's son, Todd, says he's worried that the moose hunt might be suspended altogether here, as it has been in Minnesota.

"I'd hate to see that happen, because it's a good time," he says. "Hopefully, they get it resolved and we can increase the permits in the future."

But with so many factors at work — from changes in climate and land use to public opinion — getting it resolved won't be an easy task.

This winter, biologists in New Hampshire, Minnesota and other states plan high-tech, GPS-guided moose research projects, to get a better handle on just what is going on out in the woods.