Accessibility links
Galaxy Quest: Just How Many Earth-Like Planets Are Out There? About 22 percent of sun-like stars in our galaxy may have planets orbiting them that are about the size of Earth and bathed in similar amounts of sunlight, according to a new analysis of data from the Kepler Space Telescope. 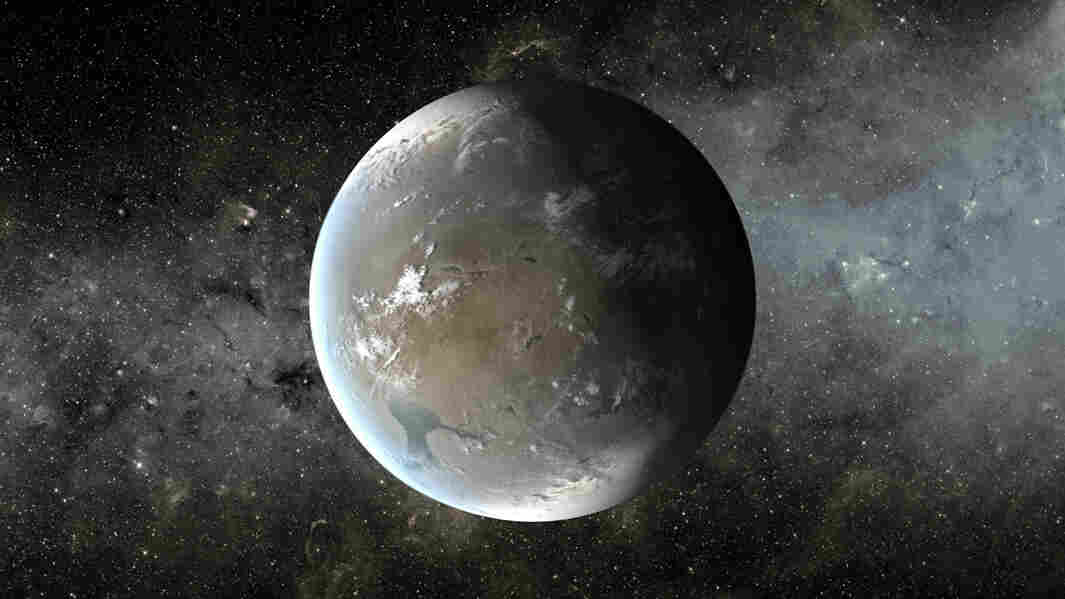 This is an artist's illustration of Kepler-62f, a planet in the "habitable zone" of a star that is slightly smaller and cooler than ours. Kepler-62f is roughly 40 percent larger than Earth. NASA/JPL-Caltech/T. Pyle hide caption

A team of planet hunters estimates that about 22 percent of the sun-like stars in our galaxy may have planets about the size of Earth that are bathed in similar amounts of sunlight — and potentially habitable.

That's the conclusion of a new analysis of observations taken by NASA's Kepler Space Telescope, which was launched in 2009 to hunt for potentially habitable Earth-like planets around other stars.

Kepler's goal was to find out if planets like Earth were cosmic rarities or a common occurrence. The telescope continually monitored the brightness of more than 145,000 stars, watching for telltale dips in brightness that might indicate a planet was passing between the star and the telescope.

At a conference to discuss Kepler findings this week, scientists who have combed through the first three years of data say that so far, they've detected indications of 3,538 possible planets, of all different sizes.

Of those planets, 104 are in the so-called habitable zone, where temperatures are mild enough to potentially allow life. Of those, "we're finding about 24 planets that are actually less than twice the size of the Earth," says William Borucki, the principal investigator for the Kepler mission at NASA Ames Research Center. At that size, he says, you might very well expect at least some or many of them to be rocky rather than gaseous.

Earlier this year, however, a critical part of the telescope failed, cutting its work short. Scientists worry that they may not have had enough time to determine how often Earth-like planets orbit sun-like stars.

They report in the Proceedings of the National Academy of Sciences that they found 603 likely planets, including 10 that are roughly Earth-sized and receive similar amounts of sunlight.

They also checked how well their software could detect Earth twins by creating data for fake planets and seeing how many of these fake planets were picked up or missed.

"You can hope that you are finding all the planets, or you can make guesses about how many planets you are missing, but you really don't know until you subject ... your analysis to a complex and thorough battery of tests," Petigura says.

"This is the first time that a team has offered such a number for stars like the sun, based on a thorough detection analysis," says Batalha. "My office was crowded with people, actively talking about the details of the work. The mood was very festive, and the dialogue was very productive."

David Charbonneau of Harvard University says the researchers have "done a careful study, and the results are very interesting."

But he notes that the team did not detect a single planet that is the same size and temperature as Earth. Instead, he points out, the group found planets that are larger and hotter, and used them to calculate the prevalence of more Earth-like worlds.

"The analysis of the Kepler data is by no means finished, and with dedicated effort it may be possible to further clean out the noise and some true Earths may pop out — but for now we have to be satisfied with knowing the population of planets that are broadly Earth-like, but in truth are probably too big and too hot for life," Charbonneau told NPR via email.

Earlier this year, Charbonneau and his colleague Courtney Dressing unveiled a study showing that around 15 percent of small red dwarf stars have a roughly Earth-sized planet in their habitable zones.

Marcy says if you combine that result with this newer study looking at sun-like stars, it suggests that our Milky Way galaxy contains something like 40 billion Earth-sized planets with lukewarm temperatures. "So that's really the stunning number, I think," says Marcy.