Accessibility links
Silenced By Status, Farm Workers Face Rape, Sexual Abuse Farm workers do backbreaking work to bring fresh produce to our tables. But one secret about life in the fields is a chilling power dynamic that can allow supervisors to sexually assault farm workers in remote orchards and packinghouses. 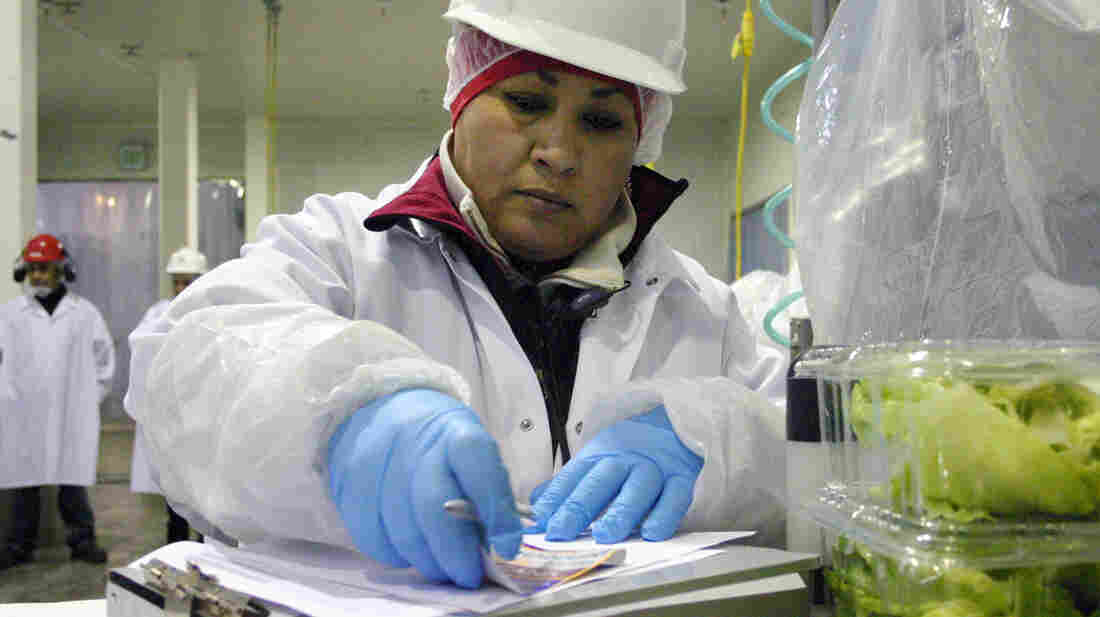 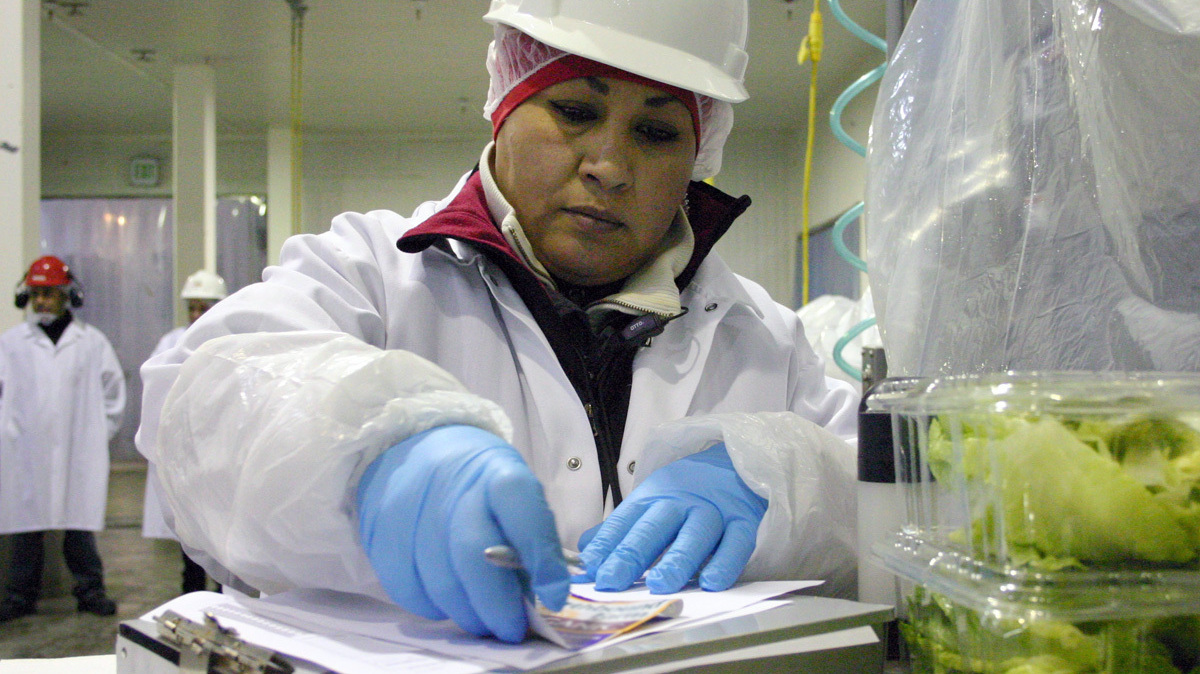 Maricruz Ladino packs lettuce in a cooler in Salinas, Calif.

This is part one of a two-part report about sexual assault of agricultural workers in the U.S.

Even though it's a warm day in California's Salinas Valley, Maricruz Ladino looks like she's going ice fishing.

"I look like a tamale — so many layers!" she says in Spanish.

The 40-year-old farm worker wears tights, thermal underwear, two pairs of socks, a hairnet, wool cap, big boots and snow pants — clothes to keep her warm on her 10-hour shift in a walk-in cooler where she packs lettuce.

"And even though I'm bundled up like this, some men at work tell me, 'What a beautiful body you have,' " she says. "For me, someone who's lived through what I've lived through, it bothers me."

Ladino is still visibly shaken by what happened back in 2006, when she says a farm supervisor constantly harassed her and pressured her to sleep with him. She tried to rebuff him until one day, on the way back from the fields, he took her to pick up some boxes. And, she says, he raped her. "I couldn't say anything. I couldn't even scream because it's very traumatic. You don't know how to react," she says in Spanish.

Like many other undocumented women, she was afraid she would be branded a troublemaker if she reported the supervisor to management. "I saw my choices: I lose my job, I can't feed my family," she says.

But, she says, after seven months, she finally worked up the courage to lodge a complaint against the supervisor. And she was fired. With the help of a legal aid group, Ladino eventually filed a civil suit against the grower. The accused supervisor denied the allegations. But the company agreed to a confidential settlement in 2010.

Ladino agreed not to tell anyone the company's name and how much money it paid her in damages. She didn't file a police report, and the supervisor never faced criminal charges or went to jail.

"Conditions that allow sexual assault to occur all revolve around who has power," says Bill Tamayo, a regional attorney with the Equal Employment Opportunity Commission.

And, Tamayo says, a farm supervisor wields a lot of power.

"He determines who gets hired, who gets promoted, who gets fired. And if you're a sexual predator, that's the ideal position to be in because you can determine whether her family eats or not," he says.

The EEOC, the federal agency charged with protecting workers from gender-based discrimination, has been reaching out to farm workers about sexual harassment with radio ads.

Over the last 15 years, Tamayo estimates his agency has won tens of millions of dollars in back wages and damages for farm worker victims across the country. The companies involved are rarely made public unless a lawsuit is filed. And the agency doesn't have the power to bring a criminal case — that's the job of local prosecutors. In fact, a review of EEOC's federal lawsuits shows none of the perpetrators accused in those cases have been tried in criminal court.

Meanwhile, the farm industry is trying to tackle a problem that's long been kept under wraps.

In California, all farms with more than 50 employees have to send their supervisors to two hours of sexual harassment training every two years. A few dozen farmers and crew supervisors — many in checked shirts and dusty cowboy boots — gathered in a Fresno hotel recently for one of those trainings.

Trainer Amy Wolfe, director of AgSafe, a California farm safety group, says she sees a real shift in the willingness of farmers to acknowledge the problem of sexual harassment.

"Unfortunately, there is still very much a good ol' boy attitude, but I definitely see improvements," Wolfe says. "I see more farmers today asking the question, where I think 15 or 20 years ago that wasn't taking place."

But not all sexual harassment training for farm employees is as thorough as this one.

Back in Salinas, Maricruz Ladino says she's worked on farms where they do plenty of training about things like equipment safety. But the sexual harassment training consists of just signing a paper and then getting back to work. That, she says, isn't enough to protect the workers who pick our fruit and vegetables.