Part two of our "Secret Persuasion" story reported with the Center for Responsive Politics. Read the first part here. 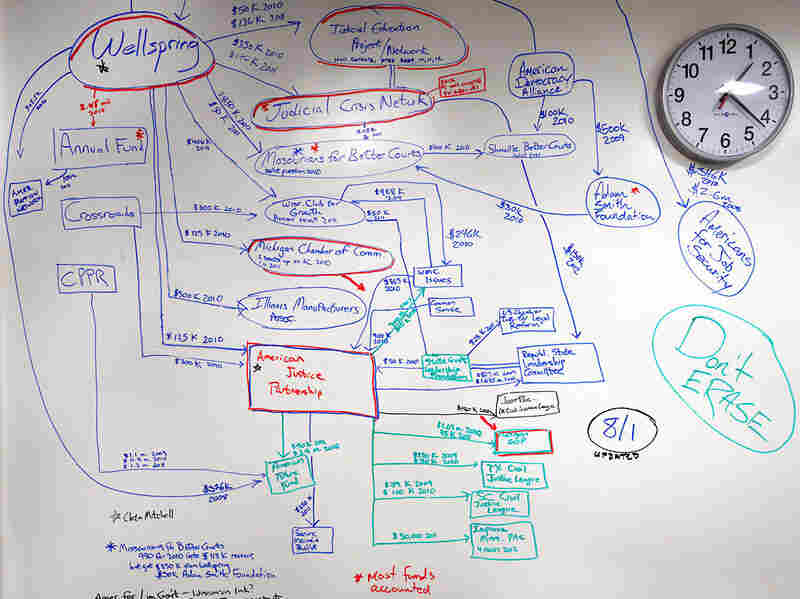 A composite image shows part of the NPR/Center for Responsive Politics reporting team's whiteboard at NPR headquarters that was used to map out how Wellspring connects to other social welfare groups. (Click the enlarge button to see a full-size image.) John W. Poole/NPR hide caption 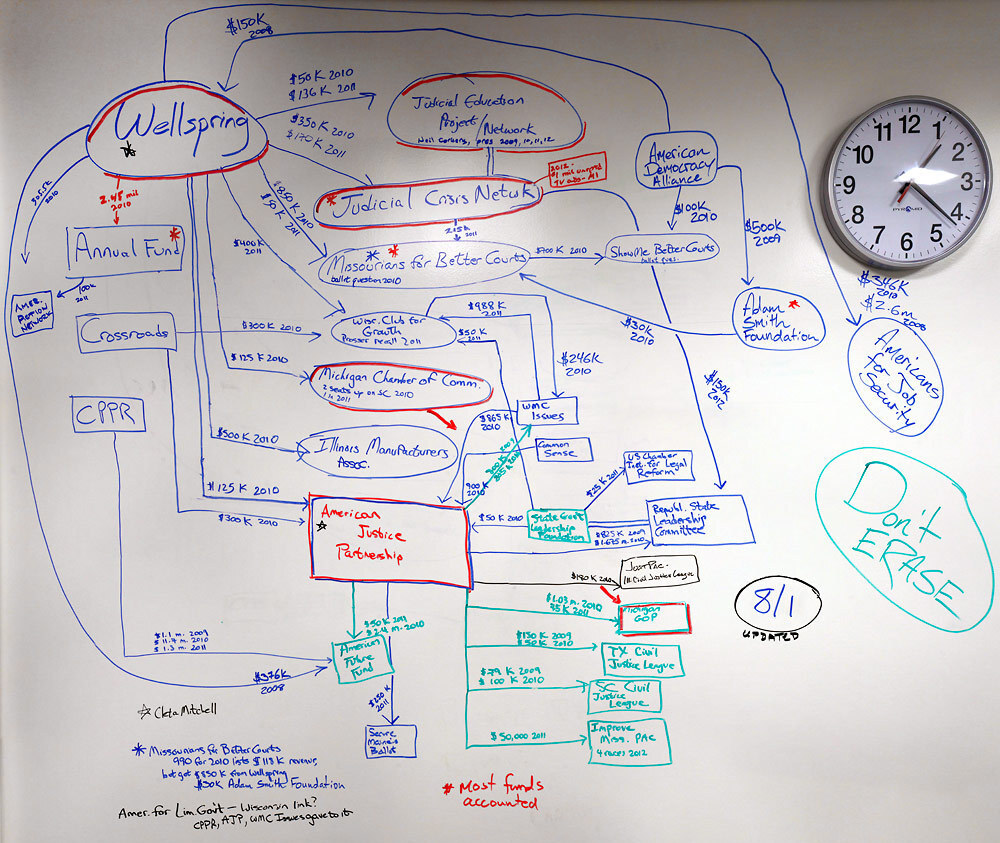 A composite image shows part of the NPR/Center for Responsive Politics reporting team's whiteboard at NPR headquarters that was used to map out how Wellspring connects to other social welfare groups. (Click the enlarge button to see a full-size image.)

As tax-exempt organizations become a vehicle of choice for big political donors, one powerful appeal is the anonymity. Federal laws allow tax-exempt groups — unlike political committees — to withhold their donor lists from disclosure.

And some groups take the low profile a step further. An investigation by NPR and the Center for Responsive Politics found a tier of social welfare groups that operate behind the scenes, raising money and doling it out to other, more public groups, while reporting those grants to the IRS only annually.

One pioneer in this activity is the Wellspring Committee, founded in 2008. Based in the Washington, D.C., suburbs, it has raised $24 million, and distributed nearly $16.9 million to other social welfare groups. Using tax records, the NPR-CRP investigation identified three of its donors — other social welfare groups — and found they accounted for just over $251,000, or 1 percent of Wellspring's revenues.

Peter Overby, NPR's power, money and influence correspondent, reported this story with Viveca Novak, editorial director, and Robert Maguire, political nonprofits investigator, from the Center for Responsive Politics. For this investigation, they used tax records to map out the relationships between social welfare organizations. To dive deeper into this story, you can explore CRP's database tracking political nonprofit spending since 2008.

From Social Welfare Groups, A River Of Political Influence

Wellspring's president is Ann Corkery, an active figure within the social conservative movement. Over the years, she has been involved with the National Organization for Marriage, Catholic League and other groups working on social issues.

Wellspring, however, says it focuses on economic matters. It told the IRS in its application for tax-exempt status that it would "assist other like-minded organizations in promoting free market policies and principles." It also would help other organizations "in developing messaging strategies," apparently drawing on Corkery's experience as a lawyer specializing in reputation campaigns.

"This sudden angst about 501(c)(4)s is startling to me," says Cleta Mitchell, one of Washington's top campaign finance attorneys. Social welfare organizations are also known as 501(c)(4)s, their designation in the tax code.

The public picture of Wellspring remains hazy. Mitchell wouldn't say much more about it. But tax returns of Wellspring and other groups provide a broad picture of the finances: Wellspring's spending spikes in election years. In 2010, it had financial ties to more than two dozen other groups. And in that election cycle, it sent money to groups working on judicial elections in five different states.

Mitchell says there's nothing surreptitious about it. These groups work almost like investment funds, she says, shepherding donors' money into selected other social welfare groups.

Big donors can be smart in business, but sometimes they can make mistakes when investing in political campaigns, Mitchell says, so groups like Wellspring are there to help.

"Things they would never, ever do in business, they'll do in politics," she says.

And all of this money — being raised and transferred behind a curtain of nondisclosure — is the crux of what makes social welfare groups controversial.

"It reminds me more of tax shelter transactions," says Donald Tobin, a law professor at Ohio State University's Moritz College of Law, who specializes in tax law and campaign finance.

"One of the interesting things for Wellspring is [that] on all of their filings, they claim that they're not intervening in a political campaign," Tobin says. "But then they give to just huge numbers of organizations that do engage in political campaigns."

Mitchell's blunt question: "What's bad about this?" After all, she says, these are not political committees operating under federal election laws.

The IRS agrees. Most of the thousands of social welfare groups are civic-minded — for example, volunteer departments, Rotary Clubs and the League of Women Voters.

But under the tax rules, a social welfare group can only commit up to half of its resources on political intervention. Notably, when one group gives money to another one, it can still count as social welfare for the donor — even if the second group spends the money on politics.

The IRS has been hit with budget cuts and a steady pounding of partisan attacks. Just this spring, congressional Republicans accused it of hounding conservatives who applied for tax-exempt status as social welfare organizations. Rep. Cynthia Lummis, R-Wyo., said at one hearing: "This is far worse than anything we've seen in Watergate."

The controversy caused an overhaul of IRS management, and the agency says it's working to clarify the rules. IRS officials didn't respond to an interview request for this story.

Marcus Owens, who headed the agency's division on exempt organizations throughout the 1990s, says it's too soon to forecast whether the agency will get tougher on social welfare groups in politics — or whether it will buckle to political pressure, and end up "just processing the paper rather than examining what is on the paper" of 501(c)(4) filings.

For now, Washington sees social welfare groups less as a problem and more as an effective way to raise money, across the political spectrum.

Mitchell, the campaign finance lawyer, says that's fine. If someone wants to make political donations, she says, "that is not the government's business. If people want to spend the money and get together with their friends and spend the money, let 'em do it."

And let 'em do it privately. Mitchell says conservative donors risk harassment by liberal activists when their names are disclosed — a violation of their free speech rights. Yet there are liberal social welfare organizations, just not nearly as many as conservative 501(c)(4)s. In the 2012 elections, conservative groups substantially outnumbered and outspent the liberals. 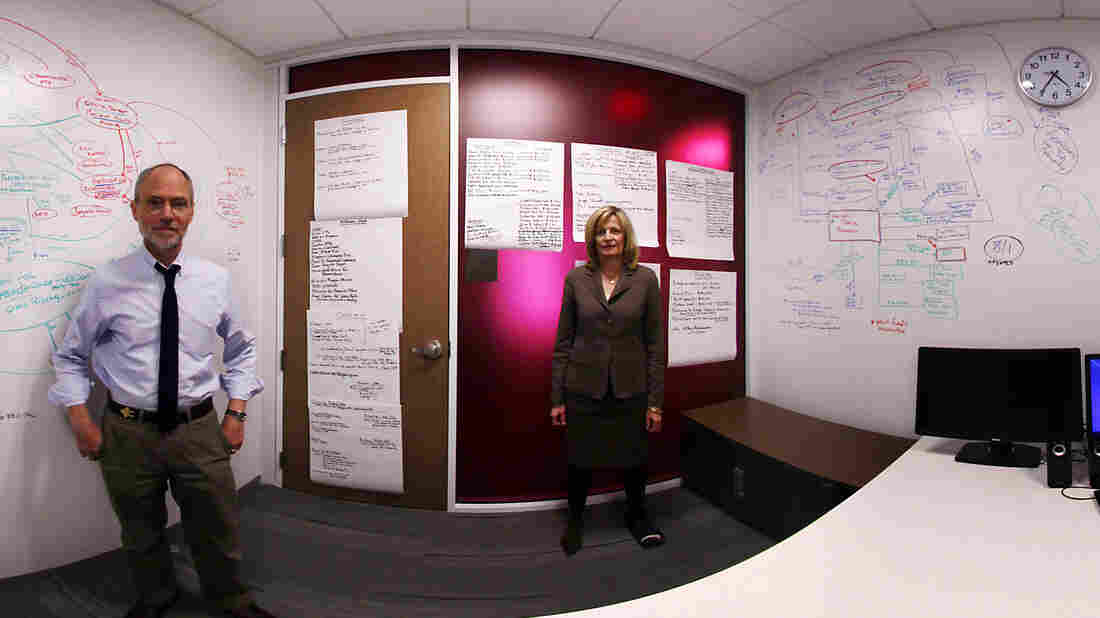 In this panoramic composite image, NPR's Peter Overby and Viveca Novak of the Center for Responsive Politics stand in front of a whiteboard at NPR headquarters that they used to map out connections between social welfare groups. John W. Poole/NPR hide caption

So far, conservatives have predominated in social welfare politics. In the 2012 federal campaigns, 20 groups on the right ran up $1 million or more in disclosed spending, compared with seven on the left. Now liberals are working to catch up.

Tobin, the Ohio State law professor, says Wellspring just does politicking under another name. He says social welfare groups act like secretly funded political committees, "and that's contrary to certainly congressional intent, but also in my view contrary to what's good for a healthy democracy."

So what we found is a system that seems to aggravate everyone involved in it.

Dan Pero, head of the social welfare group that ran the attack ad against Michigan Supreme Court Justice Alton Davis — and which NPR and CRP profiled yesterday — puts it this way: "I don't like what I see today in politics. But it is what it is. I wish I could go back to when I was growing up and we only had three TV stations. And you can't put the genie back in the bottle on that either.

Next stop on this road is the 2014 midterm elections. As the impact of social welfare groups continues to increase, so does the volume of political cash coming from donors the public will never know.

This story was reported by NPR's Peter Overby, together with Viveca Novak and Robert Maguire from the Center for Responsive Politics.

Previous audio and Web versions of this story incorrectly referred to Rep. Cynthia Lummis as Barbara.