Accessibility links
Supreme Court Examines Anew Prayer At Government Functions The U.S. Supreme Court delved into a subject Wednesday that has bedeviled it for decades: how to reconcile a tradition of public prayers with the Constitution's ban on establishment of religion. At issue were almost exclusively Christian prayers that took place at town board meetings in Greece, N.Y. 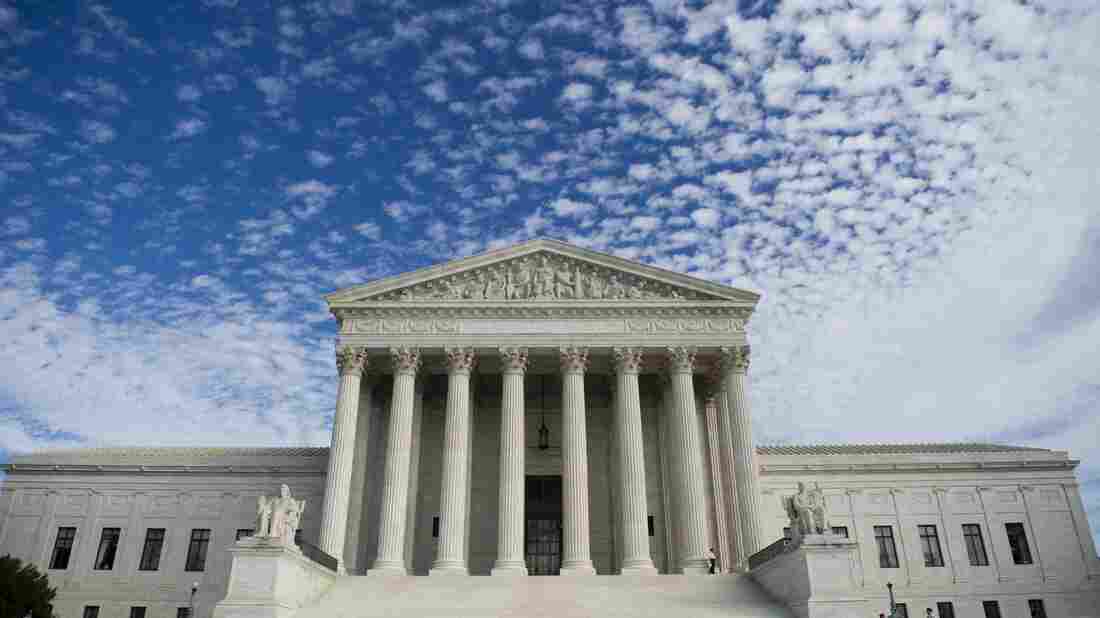 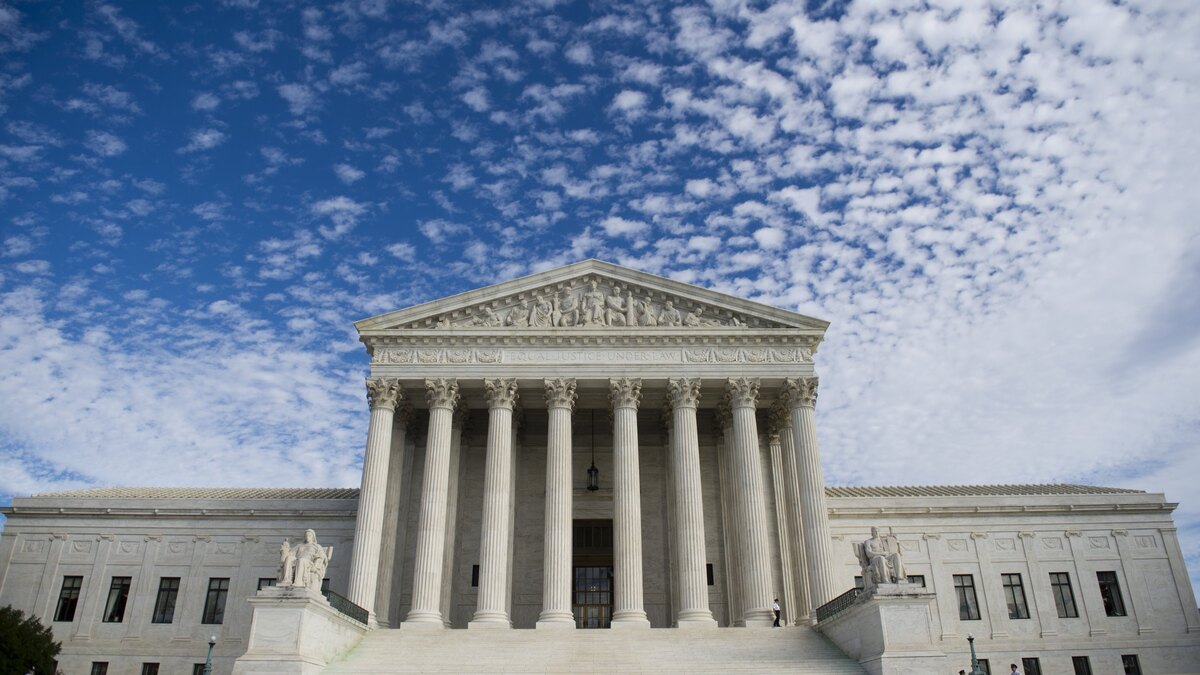 The U.S. Supreme Court delved into a subject Wednesday that has bedeviled it for decades: how to reconcile a tradition of public prayers with the Constitution's ban on establishment of religion. At issue were almost exclusively Christian prayers that took place at town board meetings in Greece, N.Y.

The justices have struggled for decades with questions involving religious expressions that are connected to government. On the current court, conservatives have been willing to allow greater accommodation between government and religion. But the justices are closely divided, with Justice Anthony Kennedy often the decisive fifth vote.

For purposes of Wednesday's case, the critical precedent is a 1983 decision that upheld nonproselytizing prayers in state legislatures.

Generally legislatures have been deemed different from courts or executive agencies. But even at the Supreme Court there is a daily invocation of God's name. The court's marshal opens each public session, intoning, "God save the United States and this honorable court."

But what about explicitly sectarian prayers at local government meetings? Wednesday's case, presenting that issue, involved two citizens who filed suit challenging the almost exclusively Christian prayers in the town of Greece.

Until 1999, the town opened its board meetings with a moment of silence. But when a new supervisor was elected, he instituted prayers from a rotating list of clergymen. For a decade, until the lawsuit, all of the clergymen and prayers were Christian.

One representative prayer was led by a Catholic priest, who opened the meeting with these words: "We acknowledge the saving sacrifice of Jesus Christ on the cross. We draw strength, vitality, and confidence from his resurrection at Easter. Jesus Christ, who took away the sins of the world, destroyed our death. Through his dying and in his rising, he has restored our life. Blessed are you, who has raised up the lord Jesus. You who will raise us, in our turn, and put us by his side."

Justice Elena Kagan opened Wednesday's Supreme Court argument by reading that prayer to the lawyer representing the town, Thomas Hungar. Suppose, she asked, that at the beginning of this session of the court, "the chief justice had called up a minister to the front of the courtroom," and the minister "had asked everyone to stand and bow their heads in prayer," and then he gave this same prayer that the priest gave in Greece. "Would that be permissible?"

"I don't think so," replied Hungar.

Kennedy wanted to know, "Why not?"

Hungar contended that there is a historical difference between prayer in the legislature, which dates back to the first Congress, and prayer in the courts, which has no similar history.

So, "there's no rational explanation? It's just a historical aberration?" asked Kennedy.

Chief Justice John Roberts chimed in, noting that "history doesn't make it clear that a particular practice is OK going on in the future." We may not be willing to go back and take the cross out of every city seal that's been there since 1800, he said, but that "doesn't mean that it would be OK to adopt a seal today that would have a cross in it."

The justices then focused on what sorts of government meetings could constitutionally permit prayers. If we allowed a prayer at a utility-rate-making board meeting, Kennedy offered, "I don't think the public would understand that."

Supporting the town of Greece was the Obama administration and Deputy Solicitor General Ian Gershengorn. He reminded the justices that in their previous rulings, they had repeatedly barred any "parsing" of prayers.

Justice Sonia Sotomayor, however, pressed Gershengorn, noting that the court has also specifically barred prayers that proselytize, or prayers that damn other religions. "Unless you parse the prayers," she asked, how can you "determine whether there's been proselytizing or damnation?"

"What troubles me about this case," offered Kagan, is that here is a citizen going to local government, "the most responsive institution of government that exists." But instead of relating to the government simply as an American citizen, she is forced to identify based on her religious beliefs. Beliefs that may be different from the majority of people in the room.

Representing the citizens challenging the prayer practice in Greece, University of Virginia law professor Douglas Laycock took quite a pounding, particularly from the court's conservatives.

Said Justice Samuel Alito: "You are really saying you can never have prayer at a town meeting." No, replied Laycock, "We're saying you cannot have sectarian prayer."

"All right," said Alito. "Give me an example of a prayer that would be acceptable to Christians, Jews, Muslims, Buddhists, Hindus." And, chimed in Roberts, "atheists."

Laycock acknowledged that, under the court's precedents, atheists would not be covered by a nonsectarian prayer. Nor would "devil worshippers," a hypothetical posed by Justice Antonin Scalia.

"Who is going to make this determination?" asked Roberts. Does an officer of the town board have to review the prayers in advance?

No, replied Laycock. "Principally the clergy make this determination." We have a "200-year tradition of this kind of civic prayer," and "the clergy know how to do it." But, he added, most government institutions that want to have prayers provide some guidelines, as 37 state legislative bodies and the U.S. House of Representatives currently do.

"In other words," Kennedy added acidly, "the government is now editing the content of the prayers."

The clergy "can pray any way they want on their own time with their own audience", replied Laycock. "But this is an official government event."

Roberts asked what exactly is "coercive in this environment?" Was it "having to sit and listen to the prayer?"

People are asked to stand or bow their heads, replied Laycock, meaning that nonparticipants are "immediately visible."

"And this is coercion?" Scalia asked incredulously.

Yes, Laycock said. "It is impossible not to participate without attracting attention to yourself, and moments later you stand up to ask for" action from the board, whether it is a new policy or a zoning variance.

Justice Ruth Bader Ginsburg then asked what "would be necessary to bring this practice within the constitutional boundary."

"The town needs a policy," Laycock replied. Clergy should "stay away from points on which believers are known to disagree." Most important, "don't ask people to physically participate."

"The coercion can't be entirely eliminated," Laycock conceded, "but the gratuitous coercion" could be.

Justice Stephen Breyer said that his interpretation of constitutional history is that "a major purpose of the religion clauses is to allow people in this country of different religions, including those of no religion, to live harmoniously together."

Laycock agreed, noting that at the time the Constitution was written, the country was almost entirely Protestant. That is one of the reasons that having a prayer at the opening of legislative sessions in the first Congress was relatively uncontroversial.

Alito interjected that given the great religious diversity in the country today, he just didn't "see how it is possible to compose anything that you could call a prayer that is acceptable to all of these groups."

Laycock conceded that "we cannot treat everybody, literally everybody, equally without eliminating prayer altogether." But we can sweep in the "great majority of the people," with prayers to "the almighty, the governor of the universe, the creator of the world."

Kennedy: So your position is that town councils like Greece can have prayers "if they are nonprovocative, modest, decent, quiet, nonproselytizing"?

"I wouldn't use all those adjectives, but yes," replied Laycock. "And we don't think that's difficult to do."

Addressing Laycock, Sotomayor said, you hear "the resistance of some members of the court to sitting as arbiters of what's sectarian and nonsectarian."

Laycock acknowledged that skepticism. But, he added, "If you really believe government can't draw lines, then your alternatives are either to prohibit all prayer entirely or permit absolutely anything." Including, Laycock said, a prayer asking for "a show of hands" as to how many of those present are believers.