Accessibility links
Movie Review - 'Thor: The Dark World' - Thunder And Blazes, On Earth And Beyond The world is in danger from beyond the stars again — this time it's a horde of Dark Elves — and Marvel's god of thunder has to team up with his troublemaker brother, Loki to save us. Chris Hemsworth, Tom Hiddleston and Natalie Portman star.

Turns Out One Does Simply Walk Into More 'Thor'

Turns Out One Does Simply Walk Into More 'Thor' 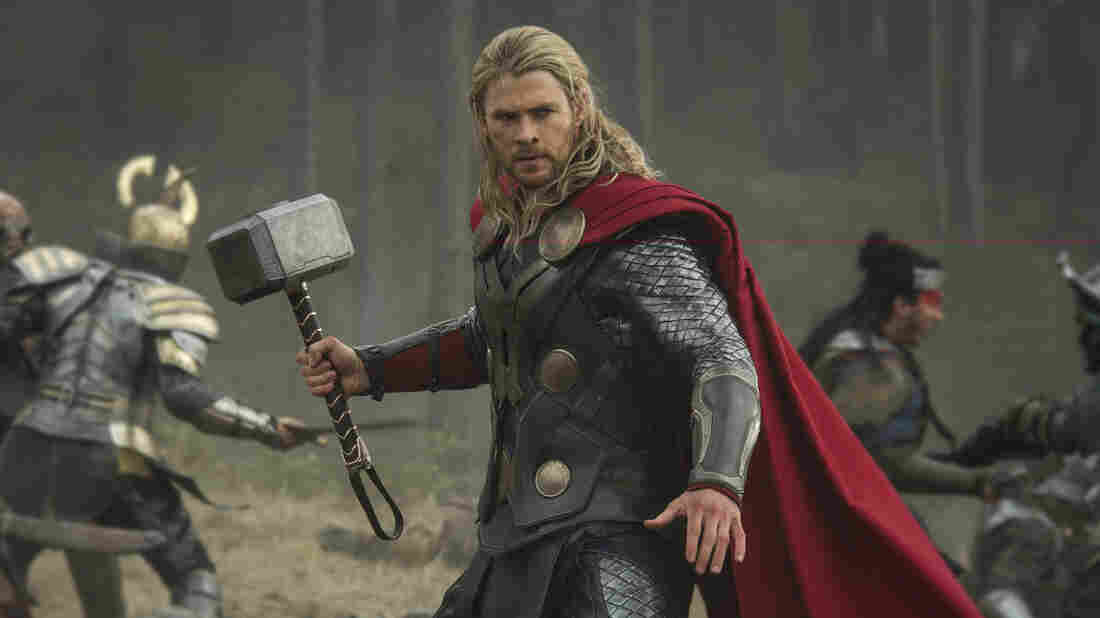 Thor (Chris Hemsworth) and his hammer are back for a supernatural sequel, battling the forces of evil again — this time without his fellow Avengers. Jay Maidment/Marvel hide caption 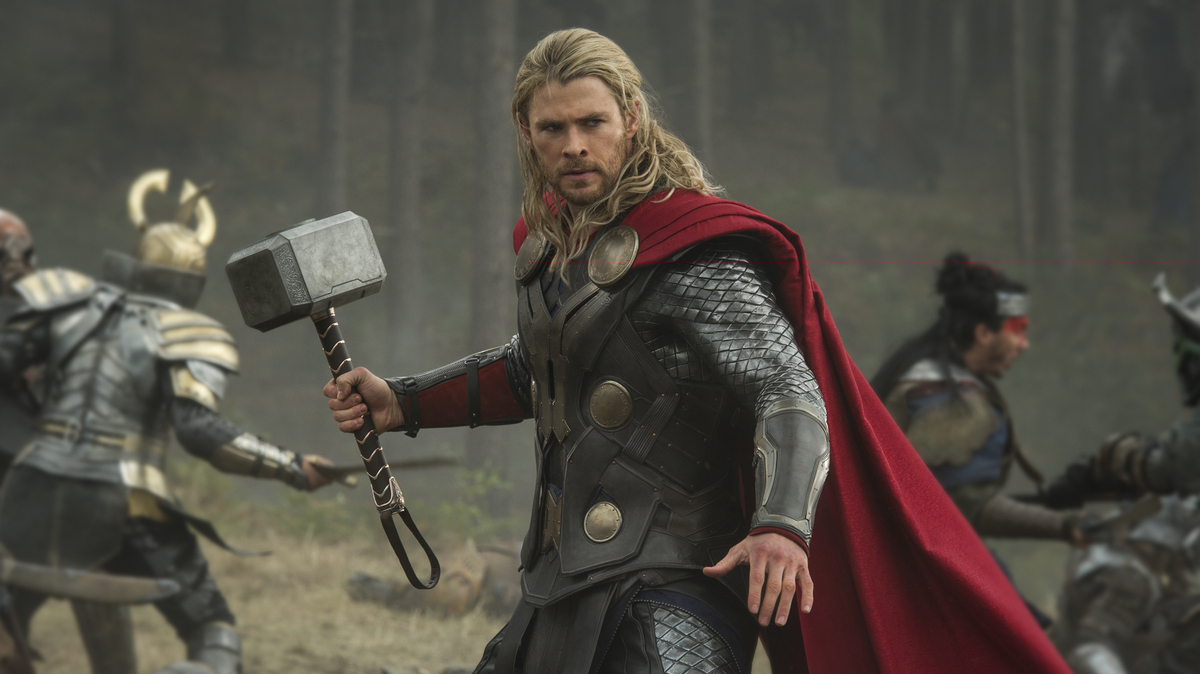 Thor (Chris Hemsworth) and his hammer are back for a supernatural sequel, battling the forces of evil again — this time without his fellow Avengers.

Rated PG-13 for sequences of intense sci-fi action and violence, and some suggestive content.

Audiences for Thor: The Dark World may initially be confused as to whether they accidentally wandered into a preview screening of the next installment in the Hobbit series.

The opening prologue — a solemn Anthony Hopkins narrates an epic tale of ancient wars between the forces of good and a race of evil elves — feels like pure Tolkien, and with good reason: the Norse mythologies that inspired the Lord of the Rings author also informed Marvel Comics' Stan Lee and Larry Lieber as they went about developing their godlike superhero.

And let's face it: The fantasy elements of the Thor (Chris Hemsworth) backstory are always slightly at odds with the sci-fi that drives the rest of Marvel's cinematic universe. The rest of the Avengers team are all humans with either heightened natural abilities or science-initiated mutations; Thor's status as a godlike otherworldly alien blends cosmic science with plain old magical mysticism.

In The Dark World, director Alan Taylor fully embraces those fantasy elements, deftly deploying them to abrade against the earthbound segments and playing up the incongruities for comic relief. 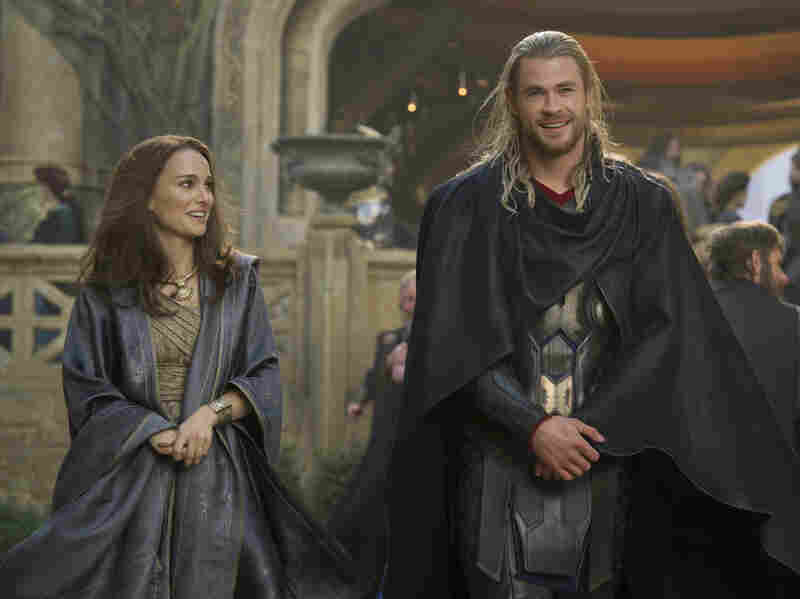 This time it's scientist Jane Foster (Natalie Portman) playing stranger in a strange land when Thor takes her to his otherworldly home in Asgard. Jay Maidment/Marvel hide caption 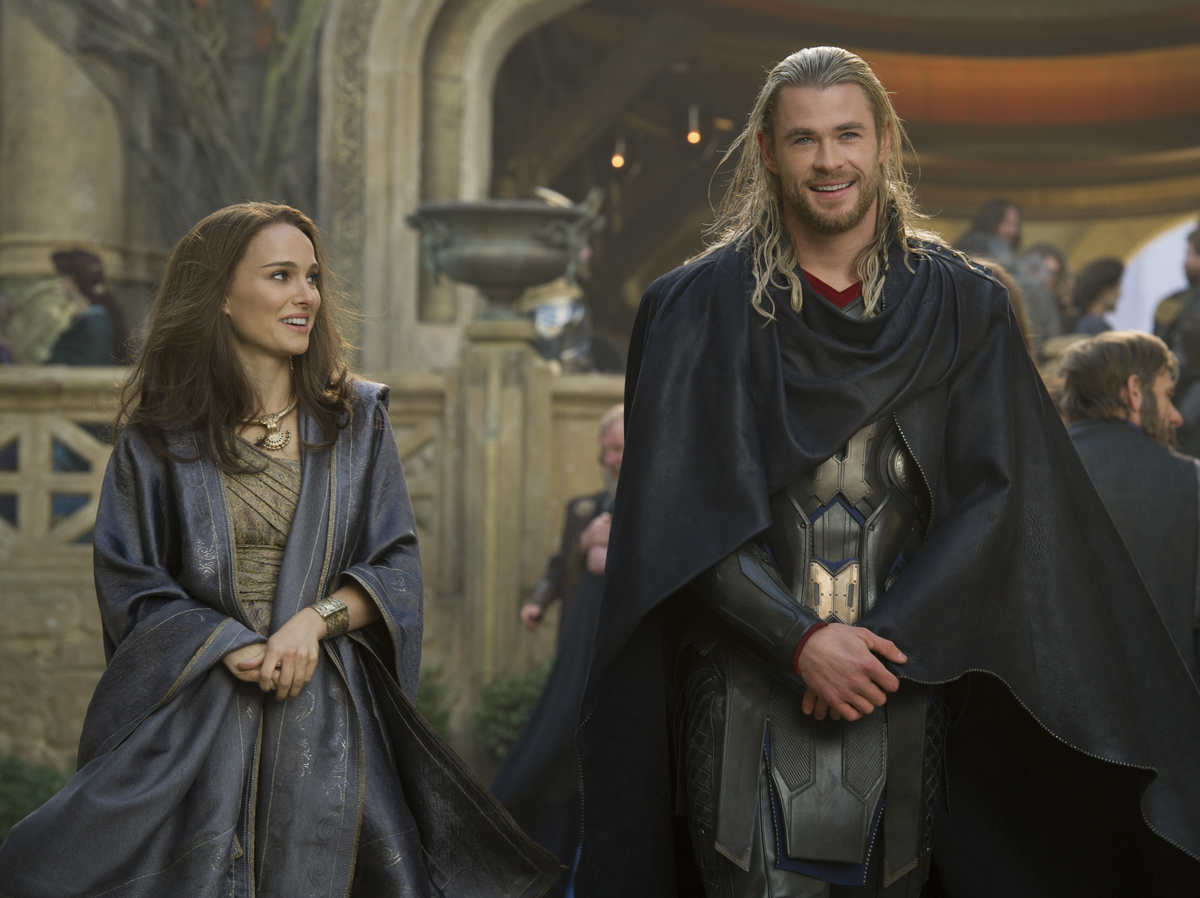 This time it's scientist Jane Foster (Natalie Portman) playing stranger in a strange land when Thor takes her to his otherworldly home in Asgard.

Taylor knows this territory well: His director's chair was most recently parked on the set of HBO's Game of Thrones, and he brings the epic sweep of that fantasy series to the otherworldly parts of this film, only with a much bigger budget for painting on a much larger digital canvas.

His digital artists deserve serious credit, too; this Thor contains some of the most gorgeously rendered images in the Avengers films, from the grandeur of Thor's home in Asgard (a glittering starlit funeral over Asgardian waterfalls, somber and beautiful) to the bleak and storm-swept landscapes of Svartalfheim, home to a race of Dark Elves who have returned after thousands of years in exile.

Those elves, led by Malekith (a nearly unrecognizable Christopher Eccleston) mean to renew their quest to destroy the nine realms that Thor is sworn to protect — our Earth is one — by way of a once-every-5,000-years alignment of the worlds and a mystical energy source known as the Aether to get there.

Only it just so happens that, due to an accidental side-effect of the coming cosmic convergence, the Aether has taken residence in the body of Jane Foster (Natalie Portman), astrophysicist and Thor's would-be girlfriend.

The lack of chemistry between Hemsworth and Portman, plain enough in the first Thor movie, is still a problem here, but at least they've largely ditched the starry-eyed schoolgirl routine. Portman is still playing damsel in distress, to some extent, in Foster's interactions with her big hero, but their romance takes a backseat to the bigger issues in play.

The more important — and more effective — interactions are between Thor and his brother Loki (Tom Hiddleston), the latter imprisoned in Asgard's dungeons since his attempt to enslave the Earth in The Avengers. Hiddleston remains the single greatest asset at Marvel's disposal, a complicated baddie played by a fine actor with a blend of wounded malice and impish glee.

The other secret weapon here is Avengers writer-director Joss Whedon, who was brought in for some uncredited script rewrites. Movies in the Avengers universe have succeeded largely on their willingness to blend light humor into the battle between good and evil, and nowhere is that more essential than in Thor's entries in the series; the overblown grandeur of his world threatens to bog things down with self-seriousness.

And so the sequences on Earth — they take place in London, surely a calculated attempt to further cement the international popularity of these films — boast a typically Whedonesque snap, particularly a deliciously awkward date that Foster goes on at the movie's start.

The film probably could have used a little more of that sort of thing, along with more of the mildly goofy antics of Foster's scientific team (Stellan Skarsgard and Kat Dennings), to ground the fantasy further. And perhaps a little too much of the film happens beyond Earth, amid fantastical realms and Norse-ish names, which threatens to distance audiences and diminish the stakes.

But once that every-few-eons convergence happens, separations between the worlds don't matter so much anymore. Dimensions collide, and Taylor allows the film to hurtle with the force of Thor's hammer into pure popcorn-spectacle territory. And that's one realm that The Dark World exists in quite comfortably.