Accessibility links
Movie Review - 'The Armstrong Lie' - One Big Fiction, And All Of The Others It Entailed In 2008, documentarian Alex Gibney (Taxi to the Dark Side) started a film about Lance Armstrong's comeback. When the bike racer at last confessed to doping, The Armstrong Lie ended up as a chronicle of his fall from grace.

One Big Lie, And All Of Lance Armstrong's Others

One Big Lie, And All Of Lance Armstrong's Others 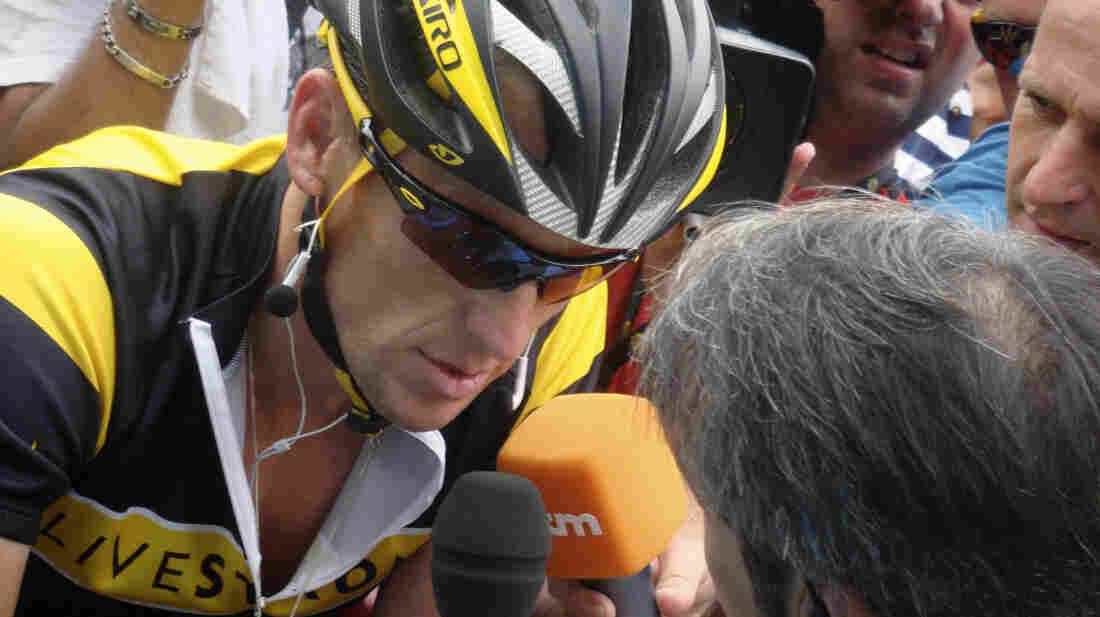 Alex Gibney's documentary started as a flattering profile of competitive cyclist Lance Armstrong, but all that changed after Armstrong admitted to years of doping — and lying to everyone about it. Frank Marshall /Sony Pictures Classics hide caption

"I didn't live a lot of lies. But I did live one big one. It's different, I guess. Maybe not."

So said disgraced cyclist Lance Armstrong to filmmaker Alex Gibney early this year, just hours after he confessed to Oprah that he'd doped during his seven wins of the Tour de France.

Gibney had been left gathering the tattered shreds of an almost-finished fanboy documentary about Armstrong's 2009 comeback to the Tour de France. The tarnished champ had been stripped of his titles and bounced from professional cycling — and from the cancer foundation he'd created — but the disappointed filmmaker was able to guilt him into sitting down for one last interview.

If Gibney was looking for contrition, though, he didn't find it. Armstrong is candid about his doping and his legendary belligerence with the press. But he's confessing, not apologizing. And that "maybe not," mumbled to Oprah, is about as equivocal as he gets — on or off camera.

He's much less timid about declaring himself "one of the greatest riders of all time," though I suppose "one of" could be filed under modesty, coming from an ego as massively unassailable as this one.

Gibney has built a career out of profiling corrupt men of power, from the corporate fat cats of Enron to Wikileaks founder Julian Assange to fallen New York Governor Eliot Spitzer to lobbyist Jack Abramoff. All his films derive their energy from Gibney's ambivalent fascination with such men, who repel and attract him in almost equal measure. 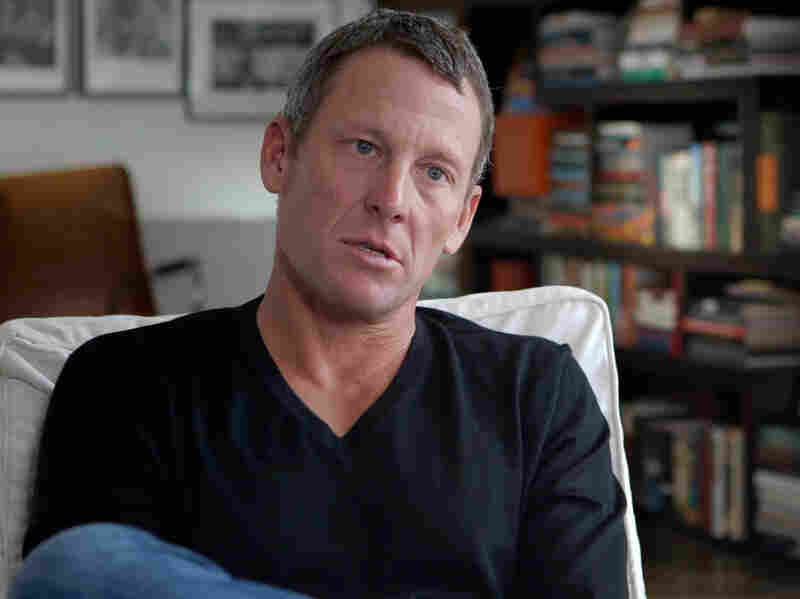 After the investigation and his public confession, Armstrong agreed to one last interview with Gibney. Maryse Alberti/Sony Pictures Classics hide caption 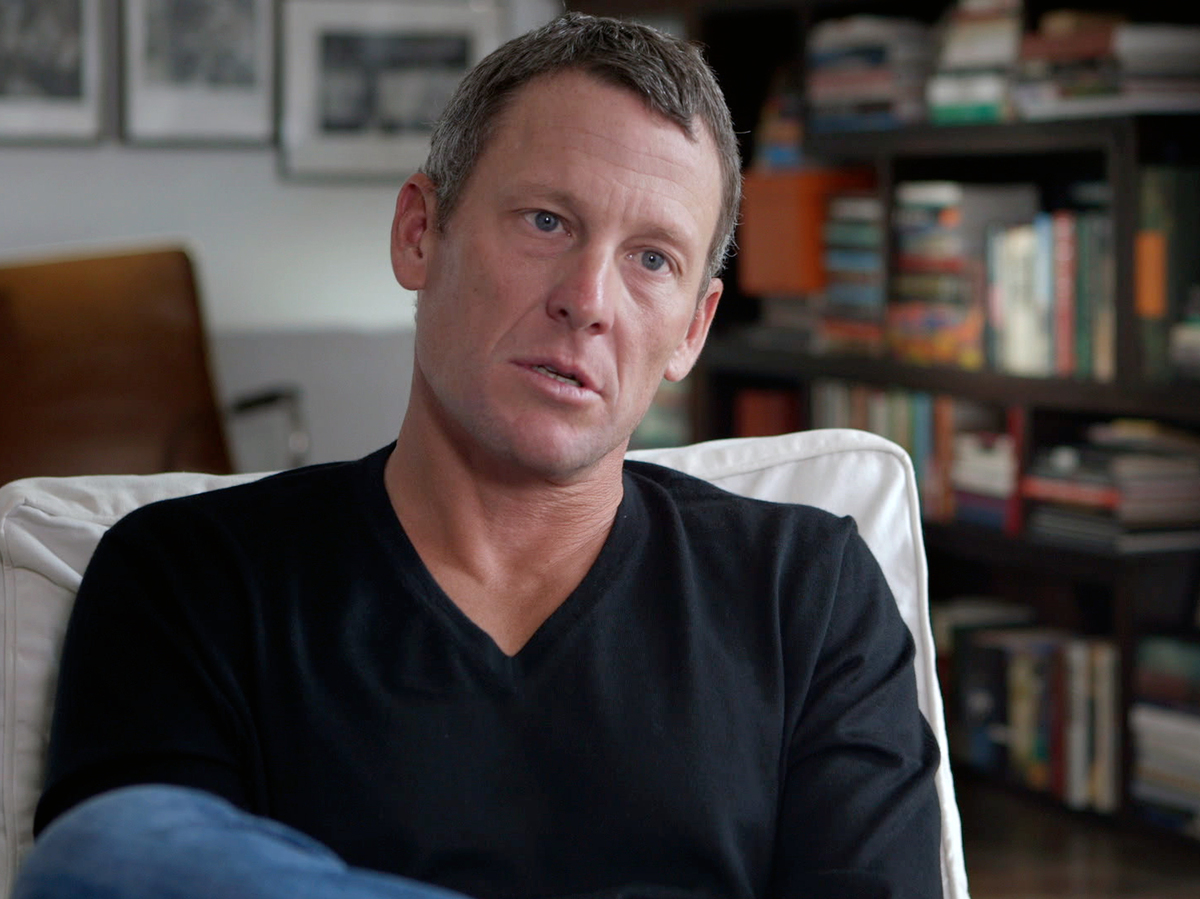 After the investigation and his public confession, Armstrong agreed to one last interview with Gibney.

His filmmaking is strenuously alpha, too. Like all Gibney's documentaries, The Armstrong Lie is fast-paced, aggressively stylized, and juiced by a driving score. That fits, but perhaps we should offer thanks that the tribute film never panned out: Not too deeply buried in the press notes is the casual but staggering disclosure that Armstrong would have taken a cut of the movie's returns in return for "unprecedented" access.

For all I know, he still will — and paying your subject is certainly no way to make a documentary. But in recasting the film as a fallen-angel parable, Gibney was able to gather testimony from scathing sports commentators as well as Armstrong's bitterly disillusioned teammates, most of whom were dedicated dopers themselves.

To hear these former colleagues — along with one ticked-off wife, Betsy Andreu — tell it, their team leader was a bully who manipulated and intimidated his teammates into taking drugs and undergoing the blood transfusions that make doping so hard to detect, especially under the "care" of the charismatic and slippery Dr. Michele Ferrari, whose conviction for aiding doping was overturned on appeal. Whoever came up with the title for Armstrong's best-selling memoir, It's Not About the Bike, was either a master ironist or completely lacking a sense of humor.

Gibney doesn't dwell much on Armstrong's early life, and wisely so; many other boys raised in poverty, without fathers, managed not to grow up to live the big lie that Armstrong has no choice but to acknowledge now.

The Armstrong Lie is rarely boring, and it's beautifully shot by French-born cinematographer Maryse Alberti. But the film is more illuminating about the corrupt sports industry than it is about its subject. Perhaps that's because for Gibney the salient question remains why, at the ripe old age of 37 and with scandal looming, Armstrong opted to make his comeback.

That seems easy to answer. Like many men of power, Armstrong was surrounded by yes-men and eager women — and buoyed by, if not flat-out drunk on, the roar of the crowd. As he admits in a rare flash of self-awareness, he can never stop fighting on or off the bike, and for him, "losing equals death."

Armstrong is a charmer who seems to genuinely love children, whether his own or the cancer-stricken kids cared for by the Livestrong foundation. But what struck me was that his demeanor, give or take a little twitching around the eyes, is pretty much the same whether he's lying (we see him denying all drug use in countless press conferences and interviews) or confessing.

Which made me wonder whether the guy has an inner life to balance his American alpha-male image — all clean lines, competitive drive and unflagging gaze into the camera. All that, plus overcoming a cancer that crept from his testicles to his brain, plus a whirring publicity machine, shaped Armstrong in the public imagination as an American superhero ripe for the kind of sensational drop that Gibney loves to document, perhaps a little too much.

In the end, Armstrong himself supplies the most interesting question in the first few minutes of his conversation with Gibney. Wondering out loud how he was able to reconcile the "two opposing narratives" of his success for so long, he concludes that the true story about him has yet to be told.