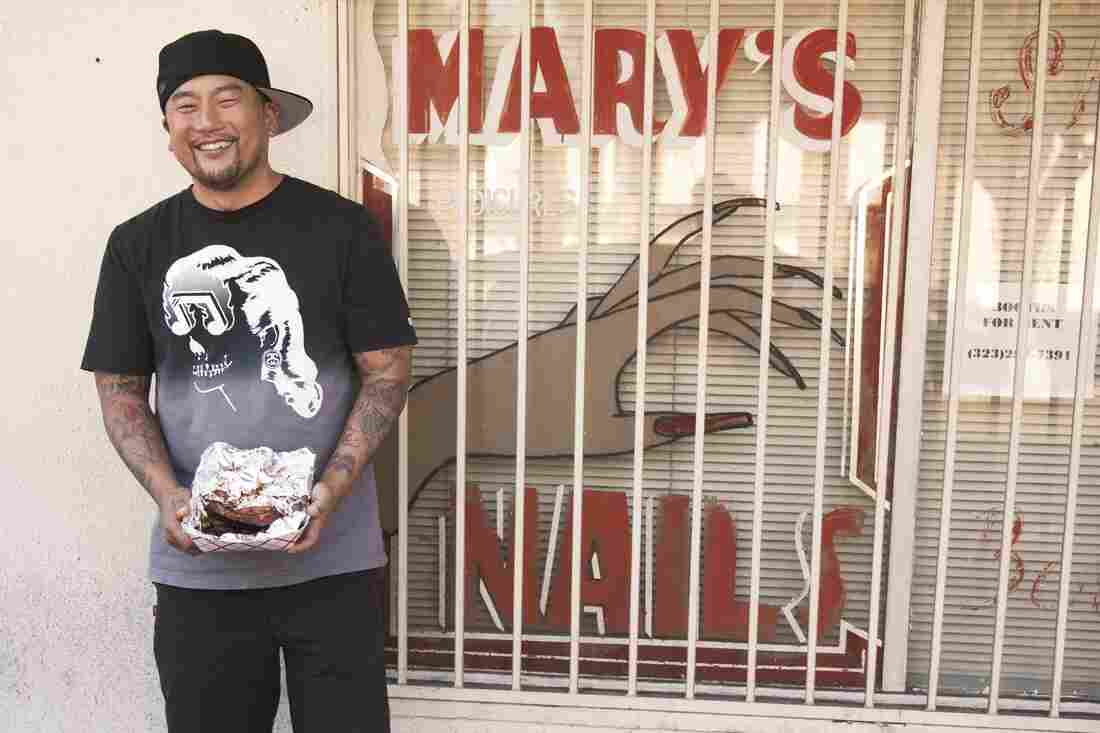 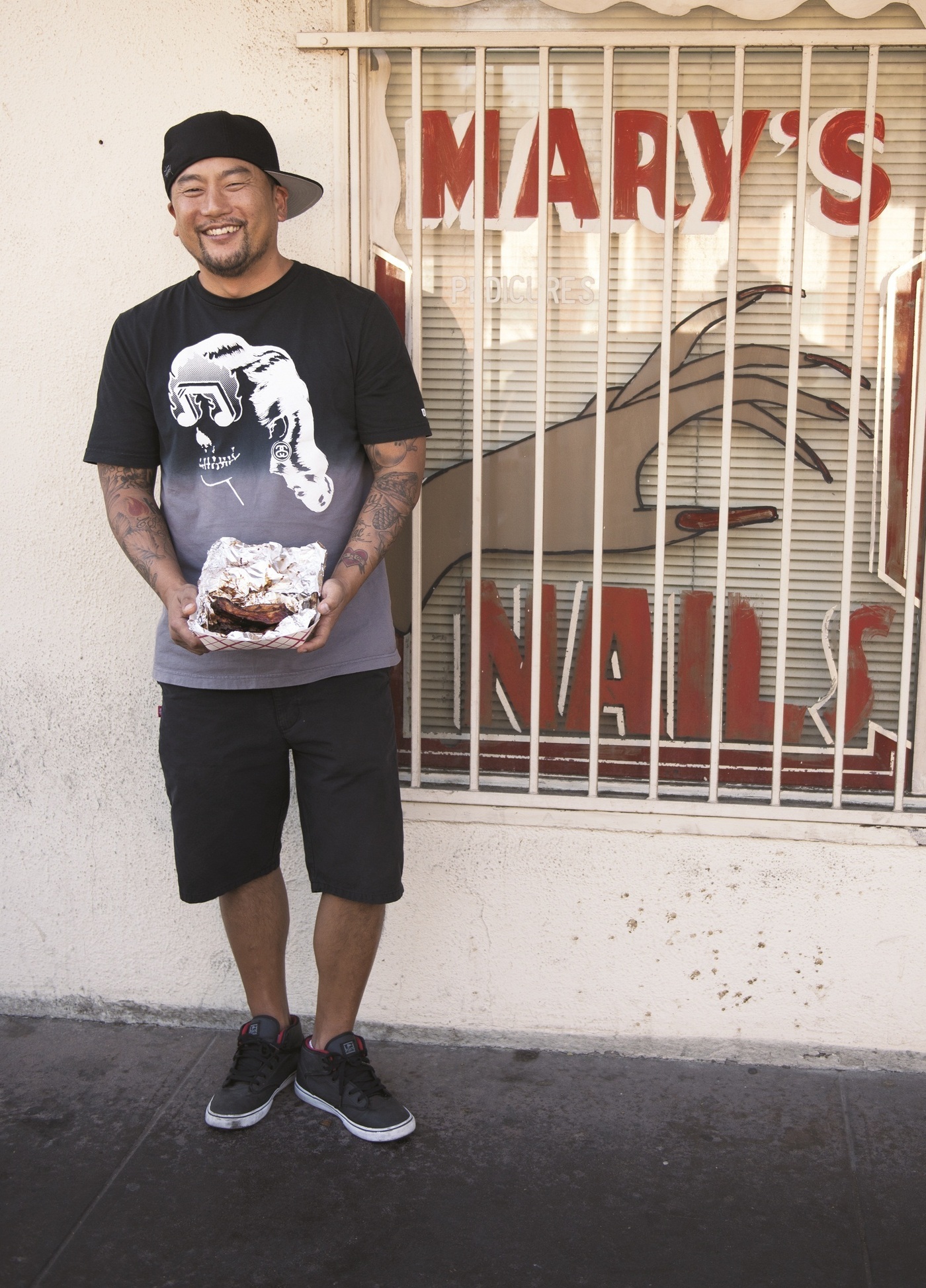 Roy Choi is a chef who's celebrated for food that isn't fancy. He's one of the founders of the food truck movement, where instead of hot dogs or ice cream, more unusual, gourmet dishes are prepared and sold. His Kogi trucks specialize in tacos filled with Korean barbecue.

Choi was born in South Korea in 1970 and moved to Los Angeles with his parents at the age of 2. His parents owned a Korean restaurant near Anaheim for a few years when he was a child. He tells Fresh Air's Terry Gross that his mother had some serious cooking talent.

"She had flavor in her fingertips," he says. "She had this connection and this innate ability to capture flavor in the moment and people felt it. Because our lives were so based around food, when someone is good at food, everyone notices and it's a big deal." 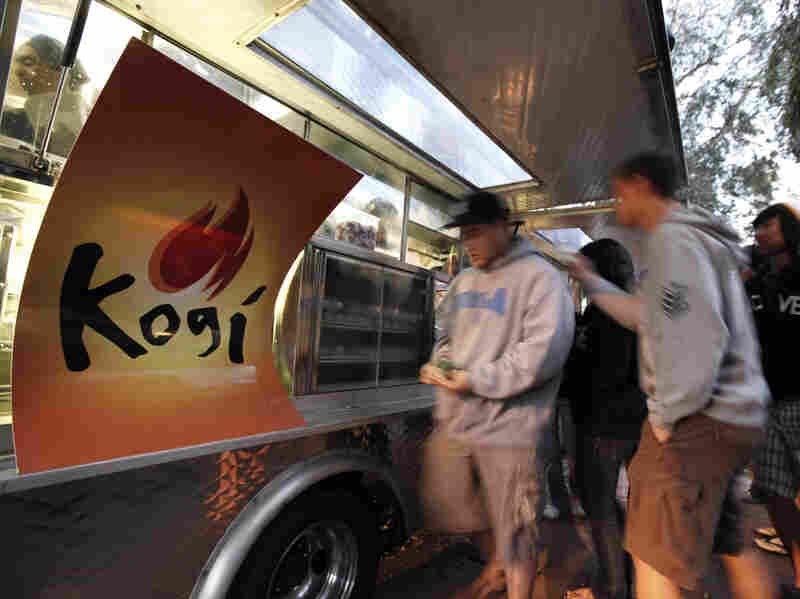 Customers line up at one of Roy Choi's Kogi BBQ food trucks near the campus of UCLA. Matt Sayles/AP hide caption 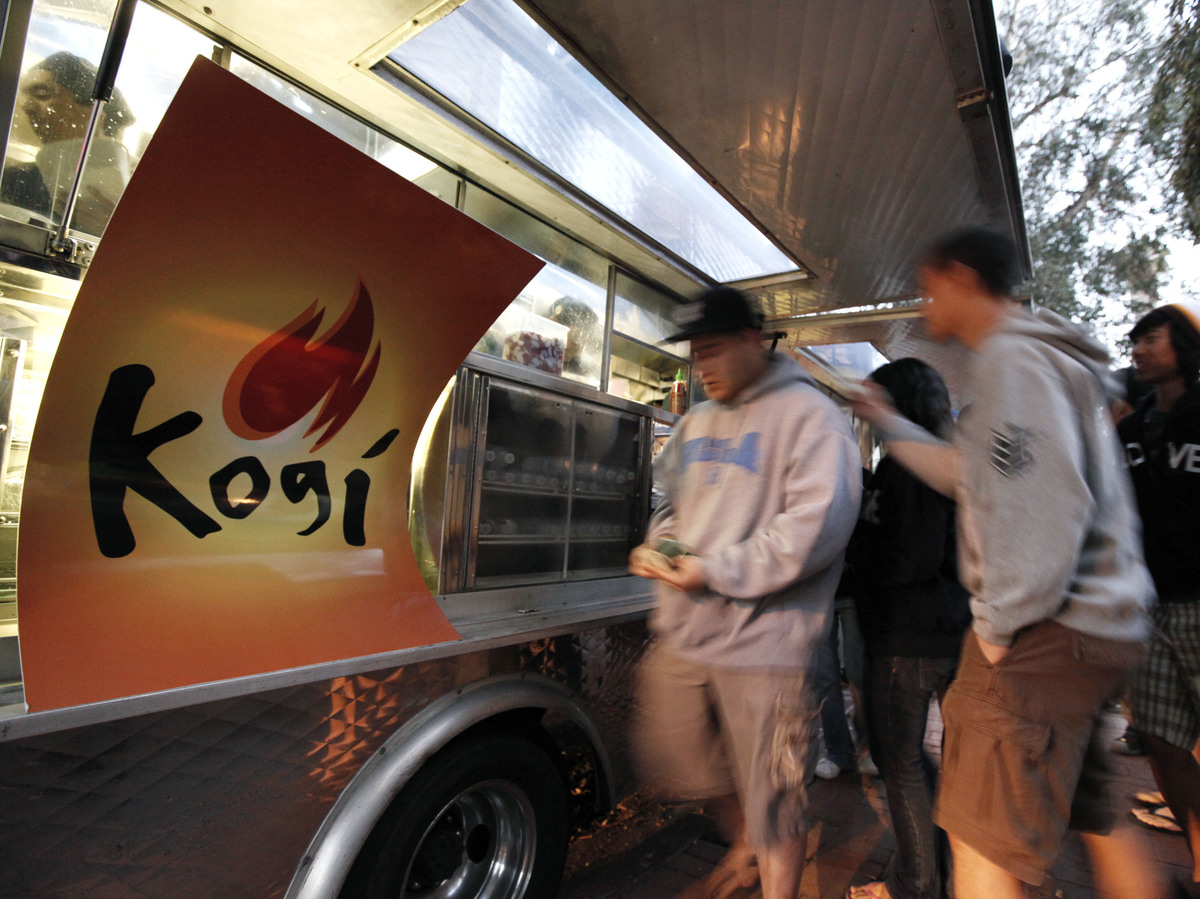 Customers line up at one of Roy Choi's Kogi BBQ food trucks near the campus of UCLA.

On what Korean tacos represent for him

The Korean taco was a phenomenon. ... It just came out of us, we didn't really think about it. The flavor, in a way, didn't exist before, but it was a mash up of everything we had gone through in our lives.

It became a voice for a certain part of Los Angeles and a certain part of immigration and a certain part of life that wasn't really out there in the universe. We all knew it and we all grew up with it, and it was all around us, but the taco kind of pulled it together. It was like a lint roller; it just put everything onto one thing. And then when you ate it, it all of a sudden made sense.

As I was putting it together, it was all of the pieces of my life coming together. It was almost like an avalanche. So it was growing up; it was being around low-riding; it was growing up in Korea, the immigration, being around the American school system; all the snack food and junk food that I've eaten; all of the tacos that I've eaten. It was all of these things. Then I really wanted to make it feel like Los Angeles, so I felt like it had to be just like a street taco in L.A. 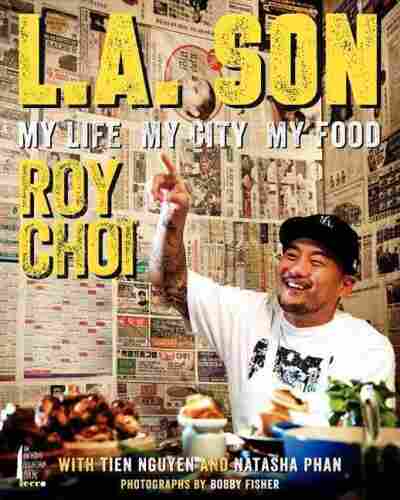 My Life, My City, My Food

On his Hawaiian restaurant, A-Frame, which is housed in an old IHOP

It's my love for the Hawaiian Islands, but it's not a tiki restaurant: It's really taking the feeling of "aloha." So we put people together, it's all communal seating, so strangers get to sit together. ... You eat everything with your hands and it's like a backyard barbecue.

... I wasn't always the most professional looking/acting dude in the world, so I'd go into restaurants, get treated not that well, kind of like crap. So what happened was I thought, "OK, if I ever make a restaurant, as soon as anyone opens that door, no matter where you're from, I want you to feel like we've been waiting for you."

On his rice bowl restaurant, Chego

That's a real personal place. ... A lot of Asian-Americans, growing up, we kind of live double lives. We had our refrigerators at home and the way we ate at home, and then we went to school and we couldn't really show that food because it was real stinky and stuff like that.

When you're going through that whole puberty/teenage angst ... you don't want to show that. Chego was my vision to show that food, to open the refrigerator, to show it to the world, and then make these rice bowls that were under $10. So it was also a platform to create great, delicious, healthy fast food that's affordable.

I was doomed because everyone had peroxide in their hair and they were coming from ski trips on Mammoth Mountain and snorkeling trips in the Cayman Islands, listening to Depeche Mode and The Cure, and I had never seen anything like that before. It wasn't really my rhythm.

A lot of Asian-Americans, growing up, we kind of live double lives. We had our refrigerators at home and the way we ate at home, and then we went to school and we couldn't really show that food because it was real stinky ...

I did the best I could. I was doomed because there weren't that many Asians and girls weren't really feeling me, but I was also doomed because if we get down to the food, the food was different for me too. I was embarrassed to show the food [we were eating] because everywhere I went, it was so different. Youngsters are mean to each other sometimes so I'd bring friends over and they'd look at my food and they'd be like, "Ew, what is that?"

... When you bring a bunch of rich friends from Orange Country over to your house and your whole house is surrounded by dead salted fish, it was tough.

... I loved it at the time. When I say the word "embarrassed" it's not that I was embarrassed and that I tried to shy away from it or that I tried to put it into the dirt and hope that it never came out again; it's just I didn't have the language to really stick up for it at that time.

LA Food Truck King Tells His Story, One Recipe At A Time

Gambling hit me at like 22, 21. And it was three years of the darkest time of my life, but it started out just all fireworks and pom-poms, you know?

It was an amazing ride for the first year, I mean tens of thousands of dollars in shoeboxes ... just ballin' crazy. ... And then I started losing. And when you start losing in gambling, then you start chasing it. ... I lost all my friends; I lost all my family; I stole from my family ... sold everything I had.

... I'm addicted to feeding people right now. It's a good thing. I don't know how long this is gonna last right now, so I'm living it up and really focusing and putting everything I got into it. I'm putting my back into it.

Read an excerpt of L.A. Son