Accessibility links
Across America, Voices Rise To Reinvent India Kanniks Kannikeswaran writes groundbreaking Hindu sacred music and forms community choirs to perform it. "When a group of about 20 strangers get together and sing raga-based music with choral harmony for the first time," he says, "something magical begins to happen." 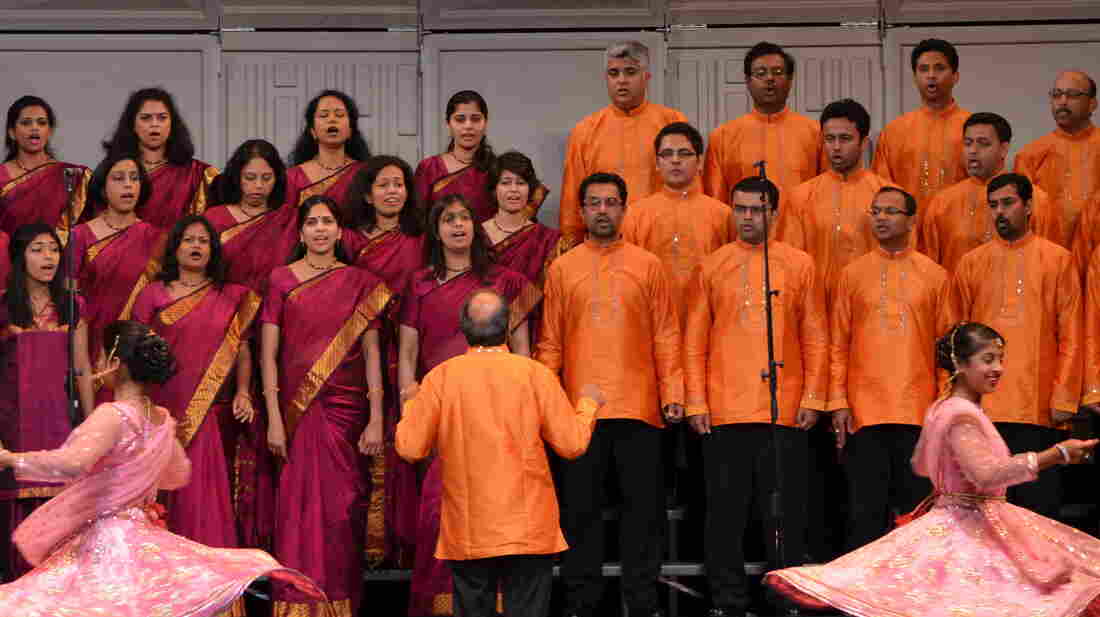 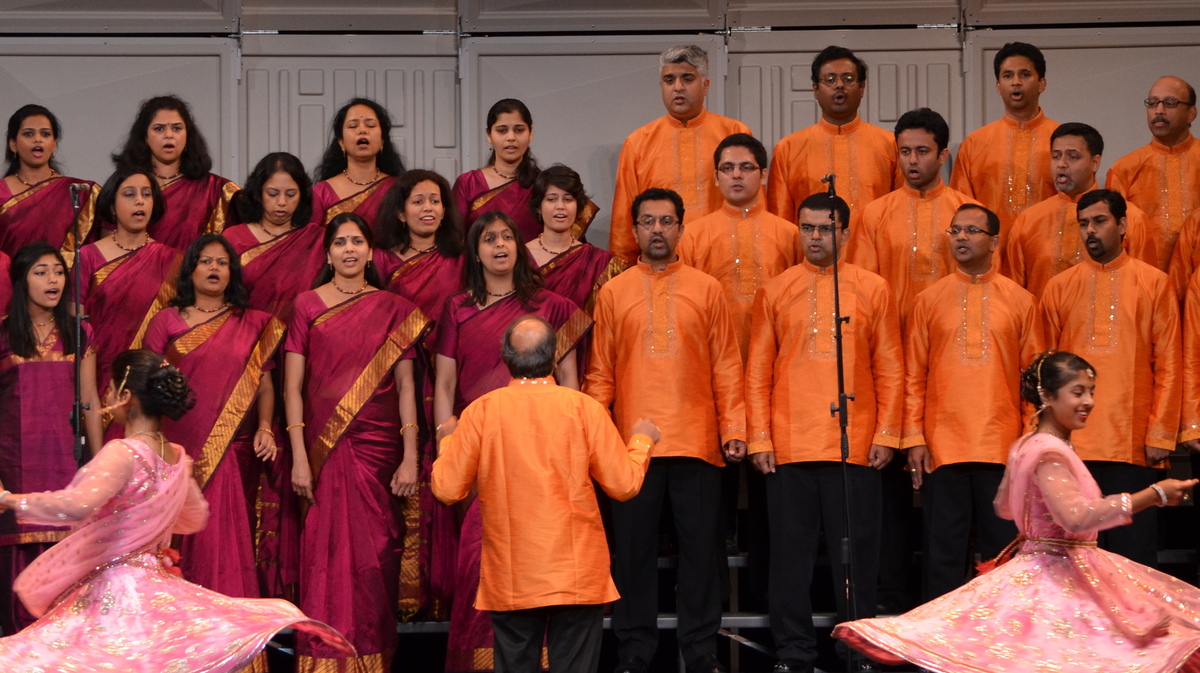 Kanniks Kannikeswaran leads the Greater Cincinnati Indian Community Choir in 2012, as it competes at the World Choir Games in Cincinnati.

When I visit Kanniks Kannikeswaran on a weekday evening, he is warming up his choir in the meeting room of a civic center in suburban Cincinnati.

"Breathe in the cosmic energy," he says to the choir. The response is a collective "Ommmmmm ..."

The people in this room are not professional singers: They are IT developers, professors, researchers and entrepreneurs. They are distinctly Indian in dress — the women wear decorated tunics; the men are in hip-length shirts.

This is the award-winning Greater Cincinnati Indian Community Choir. Kanniks — who goes by his first name — formed it 19 years ago. 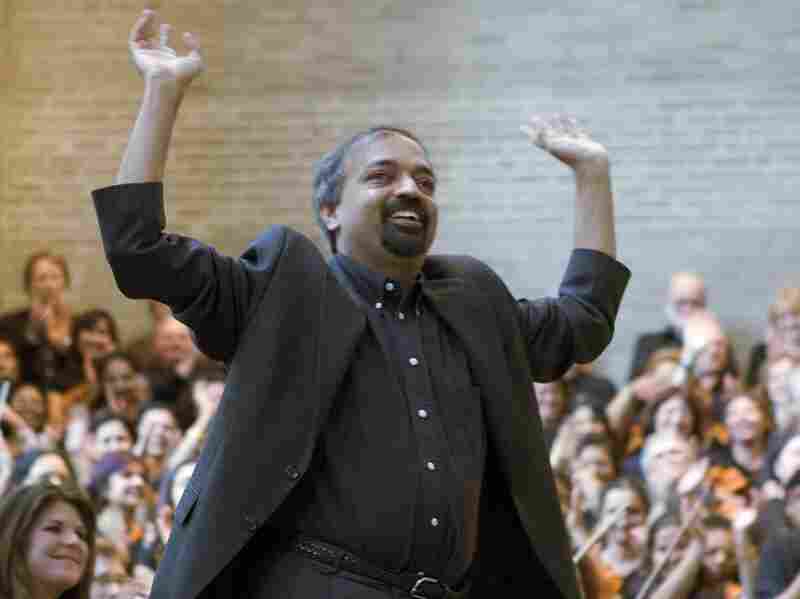 Kanniks with the choir at St. Johns Unitarian Church in Cincinnati in 2004. Courtesy of Kanniks Kannikeswaran hide caption 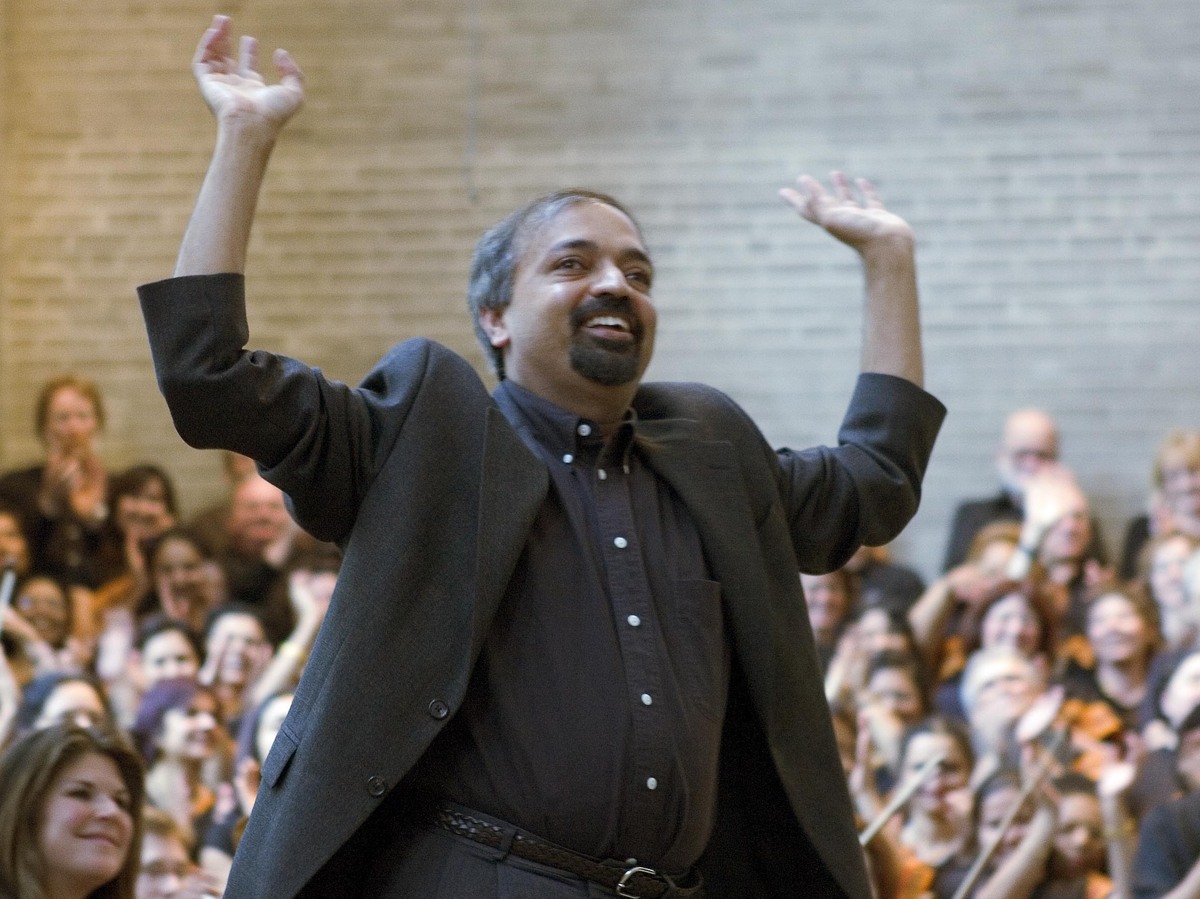 Kanniks with the choir at St. Johns Unitarian Church in Cincinnati in 2004.

"There is something in Indian classical music," says Prassana Malaviya, a research scientist and choir member. "When you're really into it and you're really singing it, you feel 5,000 years of history gushing through you. And that is an unbelievable, incredible experience."

But this choir is doing something different: Its music is neither entirely Indian nor entirely American.

Traditional South Indian classical music is typically sung solo, and heavily improvised. What Kanniks has done is fuse that music with the Western choral tradition, in effect creating an Indian-American choral movement. It is completely original, and quite distinct from groups that get together to sing Bollywood pop hits.

"There's joy when you sing together," Kanniks says. "Indian music has entirely been about individual self-expression. We haven't had a strong choral music tradition in the Indian classical idiom."

Indian classical music has been in a straitjacket, says Sundar Kadayam, a Cincinnati technology entrepreneur and friend of Kanniks. "Something about the way Kanniks has approached the classical genre has almost freed it up for the rest of the world to actually enjoy in a way that was not possible before," he says.

Kanniks absorbed Indian sacred music growing up in Madras, India. He came to the United States to attend engineering graduate school, and stayed. The soft-spoken 51-year-old with a well-trimmed, salt-and-pepper beard is a technology engineer by trade, but his life is music.

His compositions are based on ragas, melodic tonal centers associated with moods and seasons — for instance, there are ragas for morning, evening and the rainy season. His lyrics are Sanskrit and contain references to Hindu spirituality, which Kanniks says he aims to articulate for a Western audience.

"We are all interconnected, and what goes around comes around. So, those are at the very core of what we're trying to communicate," he says.

Kanniks' 18-year-old daughter, Vidita, is studying at the University of Cincinnati Conservatory of Music. She's also learning her father's compositions, including a piece written in praise to the Hindu deity Shiva.

"In theory, he's the destroyer. That sounds very negative, but it's actually very profound," Vidita explains. "The Hindu philosophy, I guess, is the universe and life is created, sustained, and then destroyed and then is reborn. So that is Shiva's role."

There's something else going on here: If you haven't heard, group singing is all the rage. Choirs of all types are mushrooming, because of the calming, energizing, connecting effect they have on the singers.

Kanniks discovered this himself when he began assembling Indian choirs around the country. "I've actually seen it come to life when a group of about 20 strangers get together and sing raga-based music with choral harmony for the first time. Something magical begins to happen," he says.

By popular demand, Kanniks has also started Indian choirs in Washington, D.C.; Houston; Tampa and Fort Lauderdale, Fla.; Minneapolis-St. Paul; Allentown, Pa.; Toronto; and, most recently, The Hague. And it's only a matter of time, he believes, before Indian community choirs catch on around the world.